Salute to the Golden Horseshoe ~ Limited Time Magic at Disneyland

1. segment about the Revue
on the DIS Unplugged: Disneyland Edition. 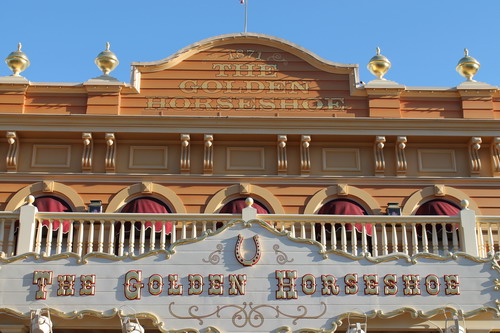 There are six shows daily, with the last show as an exclusive annual passholder dinner show.  Since this is so popular, guests must get tickets in advance on the day that they will see the show. 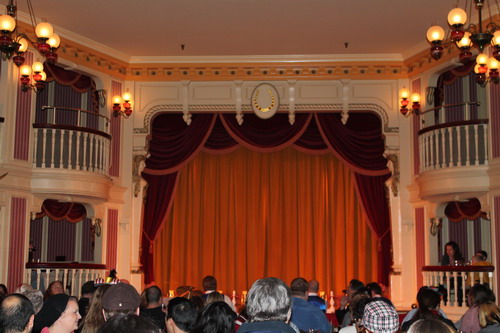 The first five shows are free, and guests go to the podium located at the entrance to the Golden Horseshoe Saloon.  A cast member will give them a ticket for the show they want with the number that will be in their party. 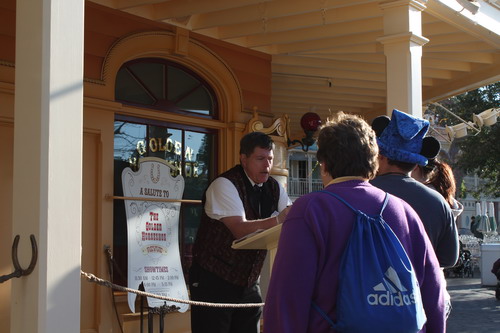 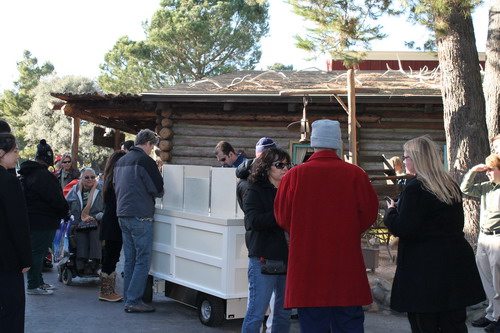 Some friends (Chris, Lesley, and Ros) and I visited the Disneyland Park specifically to see the show on the first day it opened, and we were able to see a regular show, then later the annual passholder show.

Doors open about a half hour before the show, and guests line up with tickets in hand. Chris and Lesley were already in line for the 2:00PM show when I arrived at the park.  I made it to the line before we were let in the saloon.  Although our ticket said four, there were only three of us, and Ros did not make it in time to join us.  When we reached the door, we were told that we could not enter without the entire party, and so our ticket was changed from “Four” to 3. 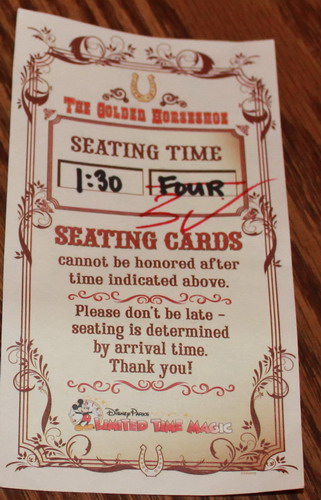 We figured that Disneyland is ensuring that people do not change ticket numbers from 1 to 4, or even 10, so they are spelling out the numbers. Ros did make it to the show, and was able to get in via the stand-by line.  I’m not sure that this will work on busy weekends, but on this cold Thursday it did.

The Golden Horseshoe Saloon serves lunch items, snacks, and drinks before the show.  Since we were going to the dinner show we did not order any food, but some of it looked pretty good.  The dessert was so cute. It was a red velvet cake with a cookie in the shape of a Can-Can dancer’s leg sticking out.  For the 2:00PM show we sat in the front, behind the four-piece band.  They stop serving food shortly before the show begins.  Once the show starts, there is no getting up, so if you want food you may want to bring it in, or get in line early.  Also, there are no bathroom breaks, and once you leave the show you cannot get back in. 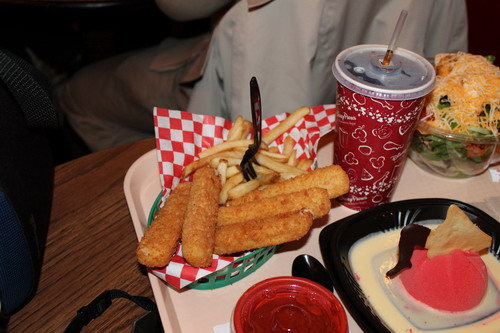 The show started with the musicians coming out and sitting down in front by the stage.  They began to play and the dancers came out.  There are three Can-Can girls, two dance girls, and two guys dressed as a cowboy and a man in a suit.  All of them perform during the show.  The main star is Miss Lilly.  They perform about four to five numbers, and include some comedy.  Some of my favorite songs were sung, and I was a little surprised to find that I still could sing along to them (to my delight, but, I’m sure not the rest of our table).  The full songs weren’t performed, but they did dance to the famous Can-Can song.  Miss Lilly also gives some history about the Golden Horseshoe and fun trivia.  I even learned something new! 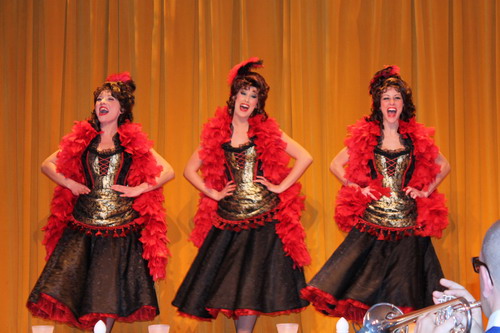 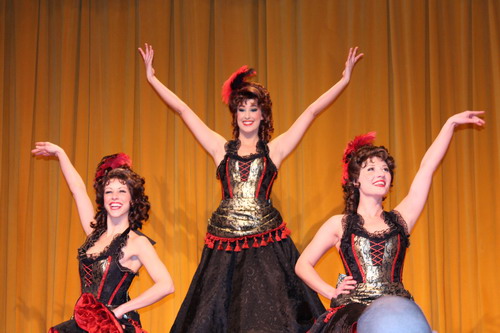 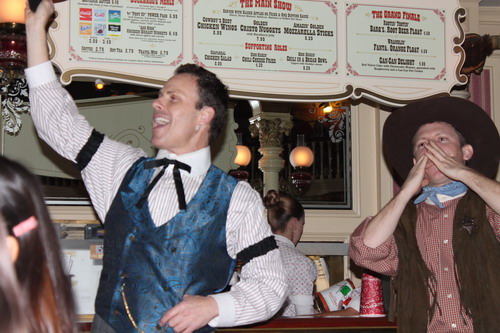 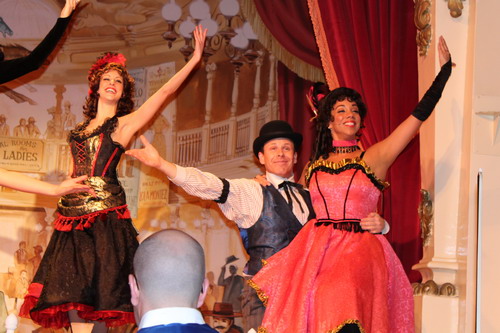 We later returned for the annual passholder show.  Again, the doors opened a half hour before the show began.  At our tables were four clear plastic boots filled with Frito corn chips and four plastic cups of mint julep.  As everyone sat in our seats, cast members doled out our dinner trays. They had regular and vegetarian fare.  All of us had the regular meal, which included a ham sandwich, roast beef sandwich, carrot salad, cut fruit, and potato salad.  We were also served honey mustard and horseradish sauce for the sandwiches.  We all thought the food was decent.  Not everyone at our table likes mint julep, and we found out we could request sodas or water, and did so.  They do not advertise this, but were very accommodating when we asked for the drinks. 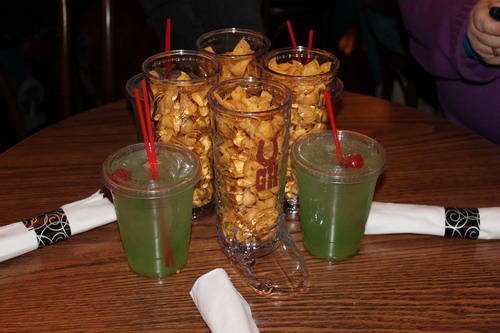 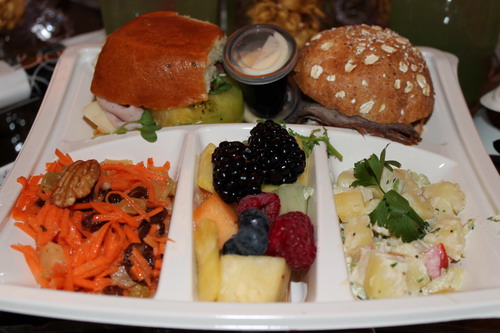 Some people had to share tables, so keep that in mind when going to this show.  It is something I would like since I like meeting people, but the mom and son sitting next to us didn’t seem too pleased at first.

The show is performed while guests are eating their meal, and this works fine for the people facing the stage, but for those whose backs face the stage, it is a little awkward trying to eat and watch the show at the same time.  I think this would be one of our main complaints about the event.  Once the show begins, the cast members stand to the side, so make sure you get everything you need before it starts.  This time, we sat towards the back of the saloon, and I think we had a better view because part of the show takes place among the guests, and you get a better vantage point. 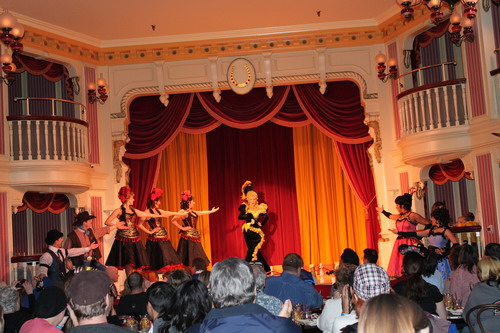 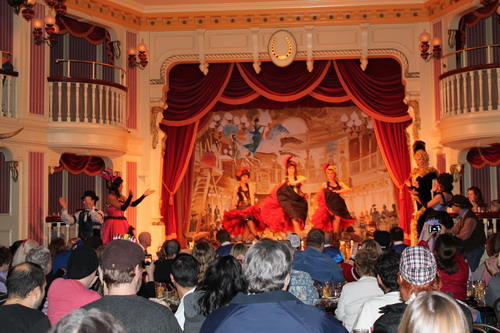 After the show was over we were served dessert, which consisted of a small round cake (white cake with raspberry filling) with a picture of Walt and Lilly Disney celebrating their 30th anniversary, which took place at the Golden Horseshoe Saloon on the day before Disneyland opened to the public.  Cast members also offered us coffee to have with our dessert.  Although it seemed we were a bit rushed before the show, we did not feel rushed to finish our meal before leaving.  I liked that. 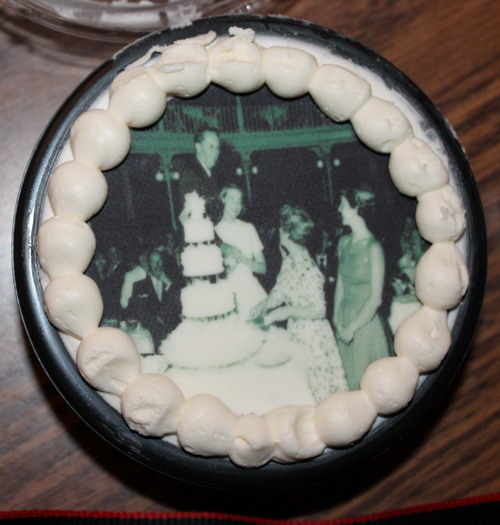 As we walked out of the saloon, cast members gave their farewells, and gave us each a commemorative CD with songs from the original Golden Horseshoe “Review,” as performed by the beloved Better Taylor and Wally Boag. 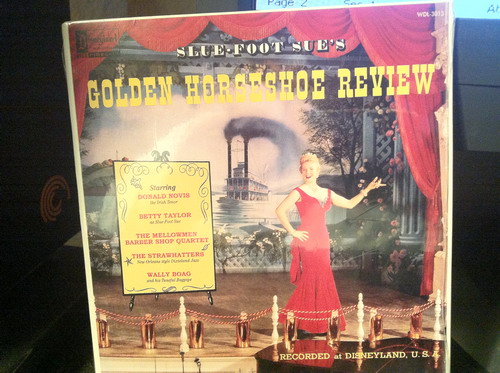 I really enjoyed the show, and plan on going back to watch one of the regular shows. This was popular when it originally ran and is sure to draw crowds in the few weeks that it will be playing, so I recommend getting a show ticket early in the morning, especially on the weekends.  If you are lucky you might be chosen by a cast member before the show to sit in one of the private booths on the side of the stage. 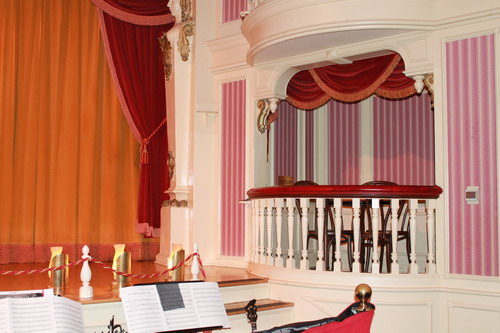 Walt’s favorite booth when he watched the show

As for the exclusive annual passholder show, our table had different reactions.  I think that on the whole, we thought that it is priced a bit high, and that it would be better as a $20 event instead of $35.  The show is the very same show that everyone watches during the day, the meal is simple, though pretty filling, and the mug with the Fritos is just plastic.  The commemorative CD is a nice touch, though, and so I am glad that I went to the event.

I think that annual passholders should take advantage of the special dinner show if they go on a busy weekend, plan on arriving late in the day when most tickets will be gone, or if they want to get the nostalgic souvenir.

The Golden Horseshoe Revue is a real treat for the Limited Time Magic Promotion, and I look forward to seeing what else Disneyland has in store for us in 2013.