Any business that invites customers onto its premises gets sued by some percentage of the guests who fall while on the property. Disney is no exception with 2012 seeing Disney getting blamed for several falls by guests.

Disney Cruise Line typically sees the slip and fall type of lawsuits, that is, almost every fall lawsuit against Disney Cruise Line alleges some kind of a foreign substance caused the guest to slip and fall. For example, a lawsuit filed in April alleged that a minor guest injured himself on the Dream when he “slipped and fell due to a wet and slippery foreign substance while walking on the stairs.”

The boy’s family and Disney seem to have reached a settlement but have not submitted the settlement to the court for approval (as Florida law requires when a minor settles a lawsuit).  Another lawsuit, by a different guest on the Dream, alleges a minor female “slipped and fell due to a wet and slippery foreign substance while on the Lido deck.”

Perhaps not surprisingly, the Theme Parks don’t see a lot of slips, but Disney does get sued by people claiming various hidden conditions at the Theme Parks or a Resort caused a fall.  For example, in one lawsuit, the guest alleged that she was in the Magic Kingdom, walking towards Cinderella’s Castle, when “she stepped upon or into a drainage grate, which was located in a designated sidewalk or walking path for pedestrians.” 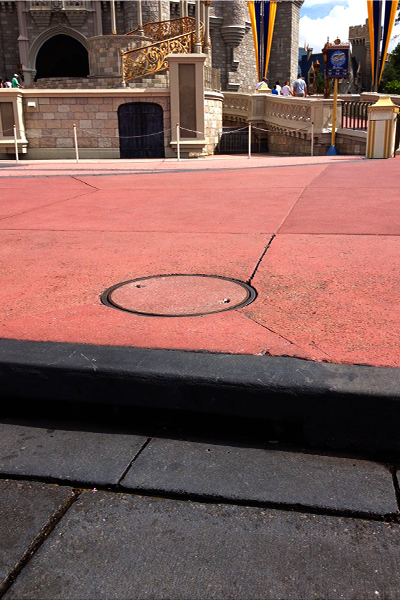 When she stepped on or “into the drainage grate, the subject grate suddenly and unexpectedly collapsed or otherwise failed such that the Plaintiff’s shoe or a portion thereof became stuck within the bars or parts of the grate.”  As a result, the guest claims, she “fell violently to the ground and caused her foot and lower leg to be twisted.” I’m a little skeptical of this one.  The entire area around the Castle is a “walking path.” With the summer deluges central Florida experiences, having storm drains in the area near the Castle is crucial, and probably necessary for guest safety.  Still, the law in Florida, as explained in a published court decision involving a storm drain at Downtown Disney is that

a property owner’s duty to maintain its property in a reasonably safe condition is not limited to detecting and warning patrons about obvious or dangerous conditions. “[T]he duty to exercise reasonable care may extend to taking actions to reduce, minimize, or eliminate foreseeable risks before they manifest themselves as particular dangerous conditions on the premises.”

Some four years ago, the guest alleges, she was “walking on the walkway from the Riverside Mill Food Court leading to the Alligator Bayou Buildings.  After completing dinner with her family in the Riverside Mill Food Court on this date, at or about 8:45 – 9:30 p.m., the [guest] was walking on the designated walkway, pathway and/or sidewalk located approximately 15 feet from the Riverside Mill Food Court.”  As the guest “and her family were going back to their rooms in the Alligator Bayou building” the guest “was caused to trip and fall as the result of encountering dangerous conditions consisting of an extreme height differential between the walkway and the landscaped area immediately adjacent to the walkway, together with inadequate lighting in and around the walkway, that prevented her from seeing or appreciating the foregoing height differential, which created a defective and hazardous condition.”  The guest goes on to assert that “there was a significant, unexpected and dangerous height differential between the walkway and the adjacent landscaped area where the Plaintiff fell.”

I expect Disney to ask the court to dismiss or transfer this lawsuit because the plaintiff filed it in New Jersey.  Disney Parks and Resorts, the corporate entity that operates Walt Disney World, routinely asks courts to dismiss or transfer lawsuits filed outside of Florida on the ground that it does no business in the other states (with the obvious exception of California).  I expect the court will grant the motion.  For example, in 2010, the same New Jersey court transferred (to Florida) a lawsuit which alleged the food at the ABC Commissary (which the complaint oddly alleged was in the Wilderness Lodge) was “not fit for human consumption.”

But my all time favorite Disney fall lawsuit occurred at the All Star Music Resort.

The allegation here is that the guest “attempted to seat at a hammock, which surprisingly flipped over, causing her to fall on her head, in the presence of her husband and her minor child.”  As a result of this accident, the guest’s lawsuit alleged, the family’s “first Disney vacations ever were ruined.”  Without meaning to dismiss the guest’s alleged injuries, I’m just having a hard time seeing how a hammock could surprisingly flip over.  I own a hammock and, frankly, I’m always surprised when the hammock doesn’t flip over.  Perhaps not surprisingly, this lawsuit went no where.  The guest and her husband, both of whom are lawyers (but who are not licensed to practice law in Florida), made two significant mistakes when filing the lawsuit (without hiring a Florida lawyer).  After the court called the mistakes to their attention and gave the guests time to fix them, the guests decided to dismiss the lawsuit altogether, reserving their right to file it again in the future.

These are not the only slip and fall lawsuits brought against Disney in 2012.  Many more are filed in state court.  Also, the photographs shown in this post may not necessarily show the location where the alleged accident occurred.   I also wanted to thank Aaron DelPrince, for taking his vacation time to get me a photo of a drain near Cinderella’s Castle, and Kathy Werling, who drove all the way to All Star Music Resort just to get me a photo of a hammock, only to find no hammocks were out.