The lawsuit Jose Martinez filed against Disneyland alleging disability discrimination when he was stranded on It’s a Small World grew heated in the last few months. Martinez’ widely publicized lawsuit alleges he and his wife were stranded for 40 minutes on Small World just inside the last tunnel when the attraction malfunctioned.  He claims that other, non-disabled guests were removed but that he and his wife (“Buchanan”) were not provided “constructive assistance from any emergency or medical professionals, or Disney employees.”  While a female cast member approached their boat, Martinez claims he “felt his blood pressure rising, explained to the female employee that he was having a panic attack, requested medical attention, and insisted that he needed to exit the ride immediately” but without success.  Martinez claims that despite telling another employee that he needed medical attention, he remained on Small World, “experiencing Dysreflexia” for another 20 to 25 minutes.  Martinez claims he repeatedly requested emergency medical attention but Disney did not contact paramedics until after he exited Small World. 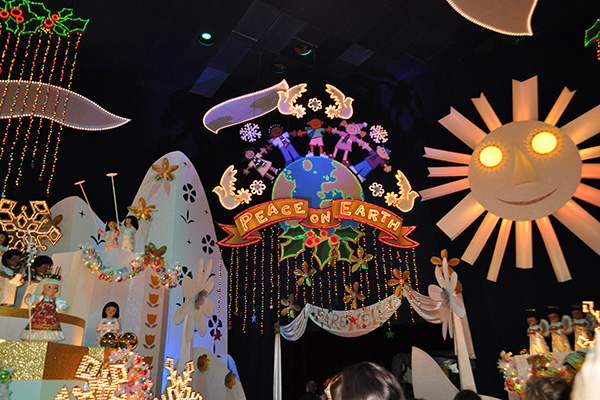 When Disney learned Martinez had settled 41 disability discrimination lawsuits, Disney turned up the heat, referring to Martinez as “an admitted professional plaintiff,” and asked the court to compel Martinez disclose what he received to settle them.  Disney pointed out that Martinez made allegations in several of the prior lawsuits very similar to the allegations he made against Disney.  Ultimately, Martinez dismissed several of his claims, presumably to avoid having to disclose information about his prior settlements.

Not long after that the parties resolved the discovery skirmish, they filed motions asking the court to rule in their favor on the merits.  The point of these motions is not to have the judge decide who will or should ultimately win, but to have the judge determine whether there are factual disputes that require a hearing.  This means the motions finally – over a year and a half after Martinez filed the lawsuit – provide us with Disney’s perspective on the events.  The following paragraphs are from Disney’s response to Martinez’ attempt to have the judge grant his motion (a motion I expect he will lose).

Disney doesn’t dispute It’s a Small World malfunctioned while Martinez was on it, that Martinez and his wife were unable to exit the ride until it resumed and his boat cycled back to the passenger load/unload dock.  While Martinez asserts he was stranded for 40 minutes, Disney’s records show Small World was down for 33 minutes (total) and that Martinez was unloaded from their boat before the end of the official downtime.

We take up with what happened after the attraction stopped. (Martinez’ contentions are in italics while Disney’s response is in bold.  I’ve omitted repetitive assertions.  Some parts of the video Disney refers to can be seen here.)

Martinez began to panic about his situation.

At all times while on the ride, Martinez had with him, in his knapsack draped over the back of his wheelchair, his medication for treating anxiety. . . . Martinez appeared relatively calm throughout the downtime and never exhibited overt symptoms of “panic.”

The Small World theme song was playing loudly over and over again, despite Martinez and other guests’ repeated requests to turn off the music.

I wonder whether Disney’s lawyers might have missed the boat by admitting to this.  Martinez visited Disneyland on November 27, 2009.  By late November, Small World had the holiday overlay, and that means, unless all the YouTube videos of Small World Holiday are inaccurate, Christmas music would have been playing (though I’m not sure 30 minutes of Deck the Halls would be any less intolerable).

Martinez’s anxiety increased as his bladder began to fill and he realized that his anxiety medication and urinary supplies were in his backpack behind him, he believed were unreachable.

Disney employee Pam Tait testified that it would not have been safe for Buchanan to attempt to reach Martinez’s backpack behind him.

Tait did not ask what she could do to help and did not offer to provide any assistance.

Tait spoke with both Plaintiffs during the downtime (as she was trained to do and based on standard protocol), inquired as to whether Martinez took medication for the panic attack that he had mentioned, asked if Plaintiffs had water with them (which they said they did), later offered that the fire department could be called to assist Martinez off the boat in an emergency (which neither Plaintiff accepted), asked Martinez if he wanted medical assistance when he made reference to difficulty breathing and, when he responded that he would like medical assistance, she called 911 to report his medical problem, thereby causing the dispatch of Disneyland nurses and City of Anaheim paramedics to his aid. Tait then returned to the WAV [wheelchair-accessible] boat to inform Plaintiffs that help was on the way.

The paramedics never came to assess Martinez at Small World.

Nurse Geiser was alarmed by Martinez’s blood pressure reading at Small World and knew that Martinez needed to be catheterized immediately to prevent a stroke.  Despite her belief that Martinez was in imminent danger, Geiser did not offer to close off the nearby restroom for Martinez and his wife. Instead, she took Martinez through the crowded theme Park to the first aid center at least six minutes away because that was the closest family bathroom.

Geiser explicitly offered to take Martinez to the Princess Fantasy Faire restrooms, which were less than 100 yards from where she and Plaintiffs were located in front of Small World, so Martinez could be catheterized as quickly as possible.  Martinez declined to go to the nearest restroom, and instead chose to go to the family restroom at the First Aid Station.

After reaching the First-Aid Station, Martinez’ wife helped him catheterize.  When Martinez’ blood pressure remained dangerously high, Nurse Geiser insisted on calling paramedics.  “Martinez declined either treatment or transportation from the paramedics entirely” and his “blood pressure came down.”

Assuming the court denies Martinez’ motion, and the parties don’t settle, the trial is set to be begin March 13, 2013.