Building the Haunted Mansion at Disneyland

There are only a few attractions at Disneyland that can truly be classified as “classic” attractions.  Certainly Pirates of the Caribbean is one of them, and Jungle Cruise too, but the other all time classic attraction is the Haunted Mansion.  It is used as a yardstick by which all other newer attractions are measured.  And although you might not see as long a queue line as Space Mountain, if you poll guests and ask “What is your favorite attraction?” or “If you could only ride one attraction at Disneyland today, what would it be?”, you’d be amazed at how often the Haunted Mansion is named.

Let’s take a look at how this classic attraction came to be.  You can also

1. listen to more about the Haunted Mansion
on our recent episode of the DIS Unplugged Podcast: Disneyland Edition. 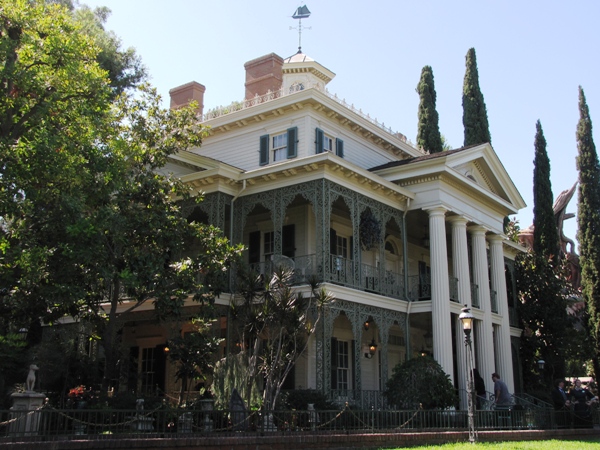 Haunted house attractions have been an amusement park standard for decades.  Even county fairs and state fairs had some form of a walk through haunted house.  Most of the effects took the form of static displays or very rudimentary characters that simply moved back and forth by an electric motor.  For the most part haunted houses were kind of silly, even if they were designed to be serious, and weren’t much more than an addition to the other kinds of amusements that were available at the time. 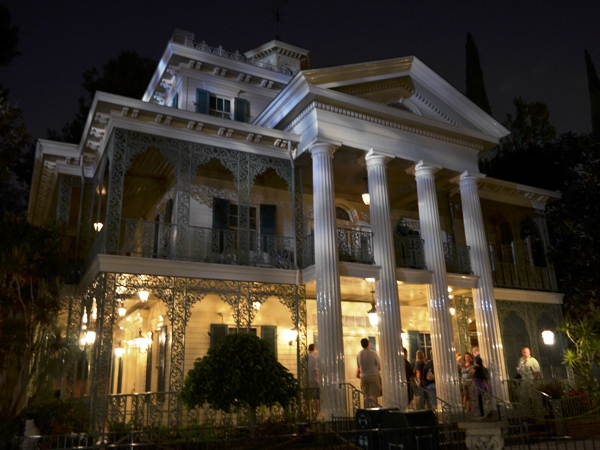 Believe it or not, the idea for the haunted house attraction at Disneyland goes back to before the park was built.  When Walt Disney first put together his team, Harper Goff, one of the early designers, came up with a sketch of an old home on a hill above Main Street.  After Disneyland opened, Imagineer Ken Anderson took the idea that Goff came up with and started designing a new attraction.  By then, the area between Adventureland and the far part of Frontierland was being designed with a New Orleans theme.  A little while later, plans were announced to guests that the area would be called New Orleans Square.  It would include a thieves’ market, a pirate wax museum, and a haunted house walk-through.  Remember that rides were still fairly expensive and walk-through type attractions were less expensive and didn’t require as much development. 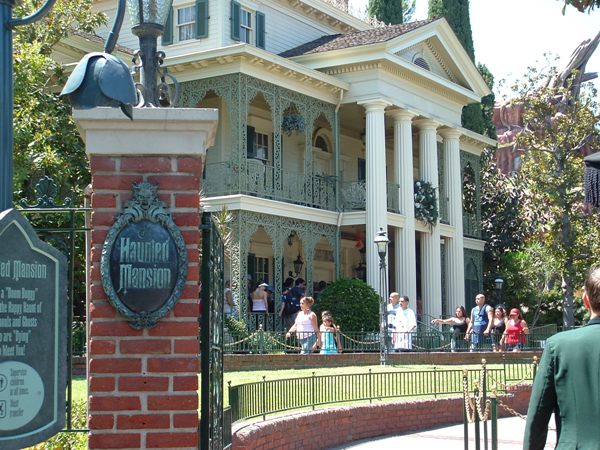 Ken Anderson’s early designs showed a southern style mansion in disrepair with unkempt landscaping.  However the story goes that Walt didn’t fancy the dilapidated look and instead preferred a nicer looking building.  I read one story that suggested that this is when Walt said, “We’ll take care of the outside and let the ghosts take care of the inside.“

Walt visited and was very intrigued with an actual house in San Jose, California called the Winchester Mystery House.  It’s been around since the late 1800s and has a very strange story in itself.  Among other things, the Winchester Mystery House has stairways which lead to nowhere, doors that open into walls, doors that open to a two-story drop, rooms that were said to have ghosts, and a multitude of stories about strange occurrences.  This house and others were some of the inspiration for the Haunted Mansion. 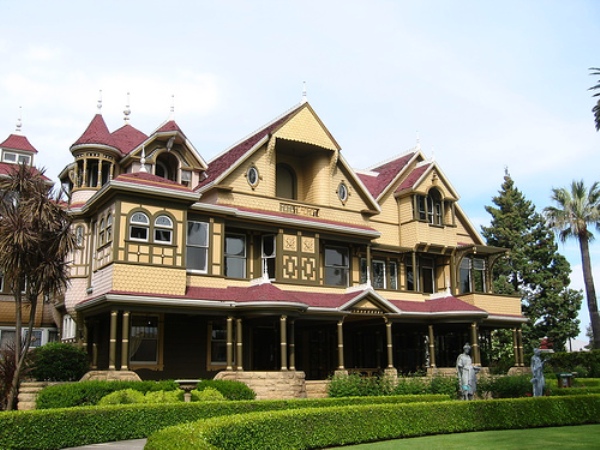 As you know, all the Disney attractions have some kind of back story.  This was extremely important for the Haunted Mansion.  Ken Anderson came up with many stories for the mansion.  One told of a sea captain who killed his bride, another was about a ghostly wedding party that included previous Disney villains, and there were even some stories that included the monsters from Universal Studios.

Two Imagineers, Rolly Crump and Yale Gracey, were tasked with designing the attraction based on Ken Anderson’s stories.  They started building effects in Disney’s studios.  They played with dozens of effects and storylines.

In 1961 it was decided that the Haunted Mansion would be a walk-though attraction housed in an antebellum mansion located in New Orleans Square.  Disneyland guests were told that that new attraction would open in 1963.  Construction began in ’62 and the exterior of the mansion was completed in ’63.  However, the entire Imagineering staff was diverted to work on the New York World’s Fair from ’64 to ’65, which delayed progress on the Mansion. 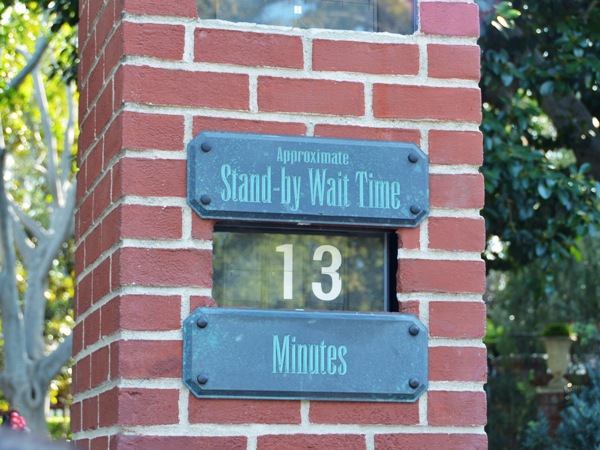 After the Fair, several other Imagineers were involved with the Mansion project, including Marc Davis, X. Atencio, and Claude Coats.  Rolly Crump showed Walt an idea for a “Museum of the Weird” which was to be either a type of queue line entertainment or possibly part of a restaurant which would be located beside the Mansion (similar to the Blue Bayou at Pirates of the Caribbean).  Walt liked the idea, and for a time it was given serious consideration. 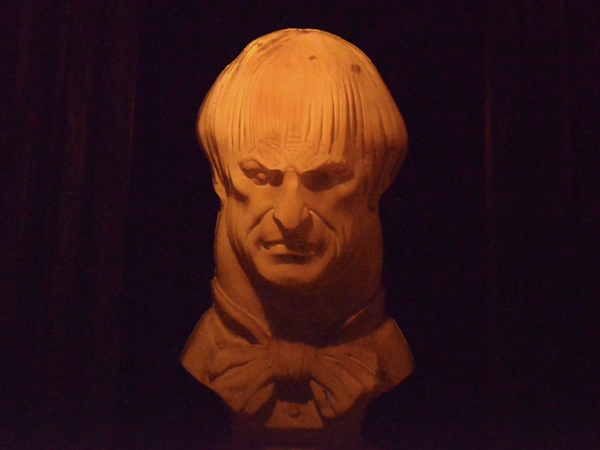 Marc Davis and Claude Coats became the mansion’s main designers.  However both of them had very different ideas about the story and how the attraction would be themed.  Marc designed most of the characters and wanted a funny attraction that was full of gags.  Claude thought the attraction should be scarier, and he designed the scenic areas like the endless hallway, the corridors of doors, and the other more scary scenes.  Eventually, it was X. Atencio who put it all together with the ideas from both designers. 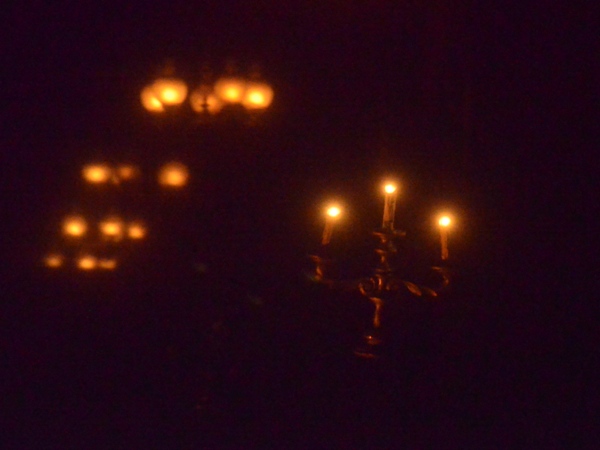 With the success of the new Omimover ride system at the World’s Fair, the Imagineers redesigned the attraction from a walk-through to one using the Omnimover.  This solved several concerns.  First, walk-through attractions traditionally had very low capacity, because guests would take their time in the attraction.  The Omnimovers could handle a much greater capacity.  Also, because you could control the direction the vehicle was facing, it would allow the Imagineers to better direct what the guests in each vehicle would see at any particular time.  The ride vehicles were named “Doom Buggies”. 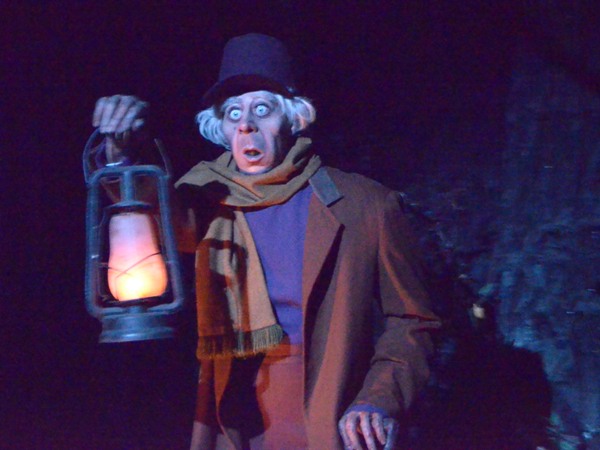 The new Audio-Animatronics characters were utilized throughout the attraction along with an impressive number of new special effects.  Many of the effects had their roots in old movie or stage production effects, but had been stepped up by the Imagineers to a whole new level. 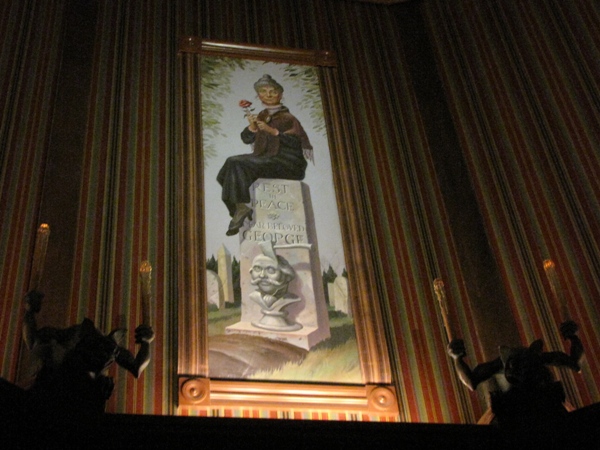 Producing the integrated and synchronized soundtrack was a monumental task in itself.  The Haunted Mansion’s theme song, “Grim Ginning Ghosts” was written by Buddy Baker, but the lyrics were written by X. Atencio.  It takes dozens of music tracks to make up all the different sounds of the characters and effects.  And because the theme song is playing in one form or another throughout most of the attraction, all the tracks have to be synced together.  With the technology available in the late ‘60s, that alone was an impressive effect.  However each particular sound segment throughout the entire attraction is just one minute long.  Your Doom Buggy is constantly moving, so you never notice the repeat.  And the end of each sound segment fits nicely with the start of that same segment, so you never notice where the stop/start is.  It just seems like one continuous track, but in fact it is dozens of separate one-minute long tracks all played at the same time. 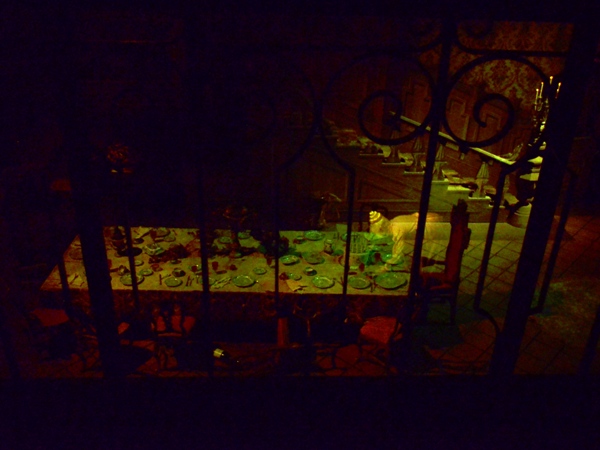 The Ghost Host, who is heard throughout the attraction, is performed by Paul Frees, who is also used in several roles throughout Disneyland.  One of the singers of the “Grim Ginning Ghosts” song and also the voice and face of one of the singing busts in the graveyard is another famous Disney performer, Thurl Ravenscroft. 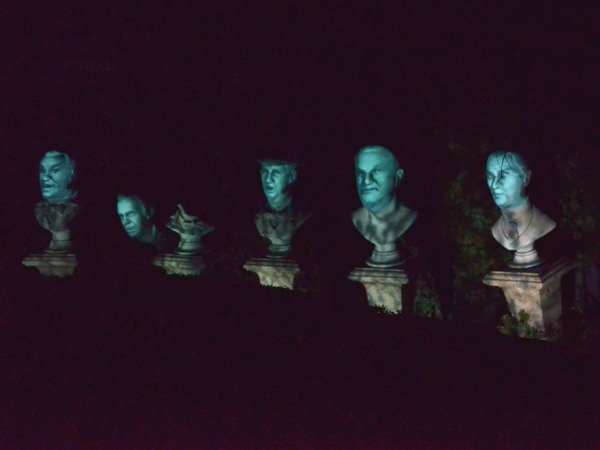 There were many rumors and stories that were circulating near the time that the attraction opened.  Even the opening date is somewhat in question.  According to the schedule, Disneyland had previews on August 9th and 10th, 1969, and there was a press event on August 11th.  The attraction was fully open to the public on August 12th.  But at that time, the term “soft opening” didn’t exist and today Disneyland lists the “official” opening as the first day the public was allowed to enter the Haunted Mansion as August 9th, 1969. 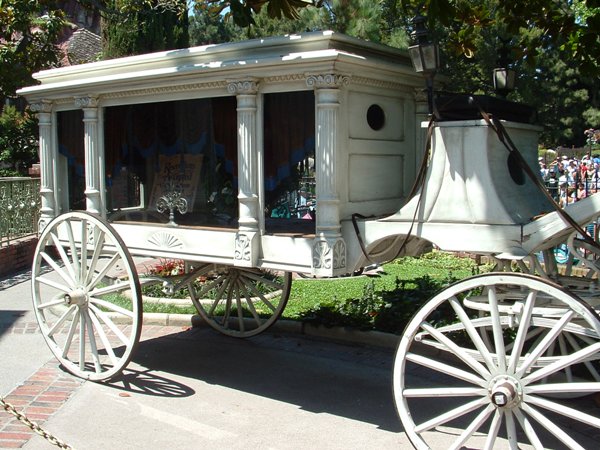 The public response was incredible.  After all, they had been looking at the completed mansion structure since ’63 and now everyone could finally go inside.  In fact, shortly after the Mansion opened, Disneyland set an attendance record with over 82,000 guests (that would be an enormous day even today). 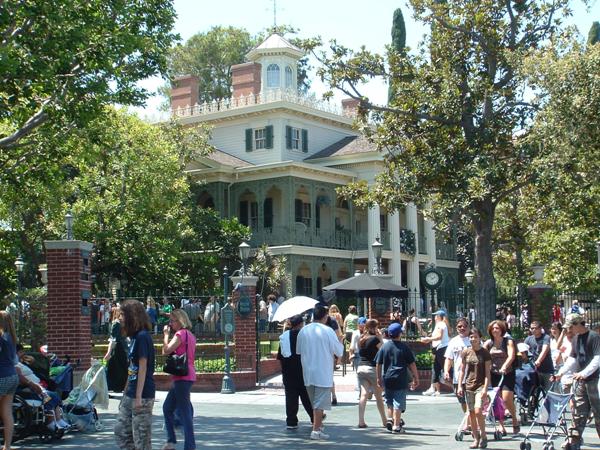 Over the years there have been various discussions about changes and improvements to the Haunted Mansion, including bringing back some of the ideas that Rolly Crump envisioned.  Some Imagineers weren’t too satisfied with how the Mansion eventually turned out, but the overwhelming guest reaction has made the Haunted Mansion one of the most popular attractions in the park, even today. 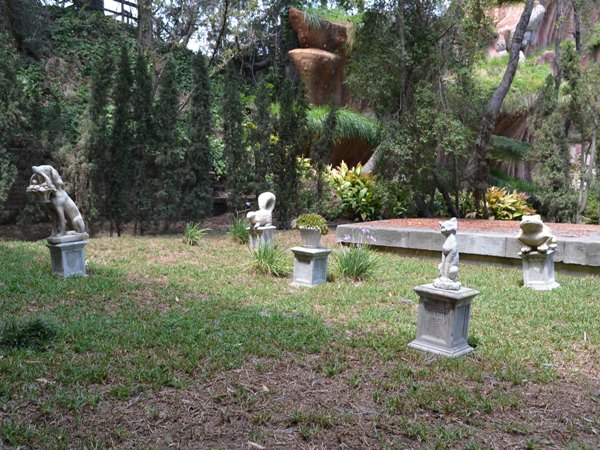 Image: Original pet cemetery (to the right of the current entrance). 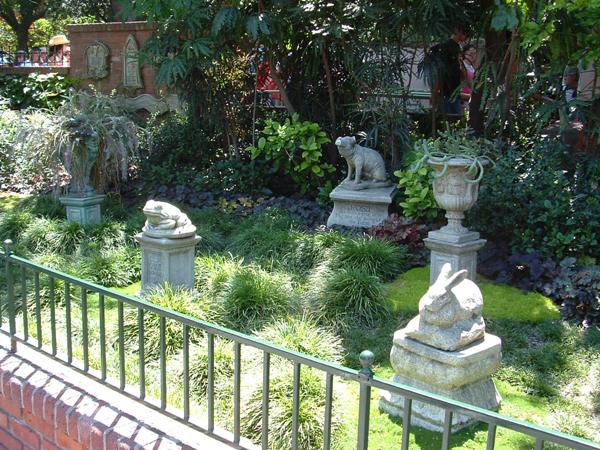 There have been a few technology improvements over the years, but the basic effects and sounds have remained the same. 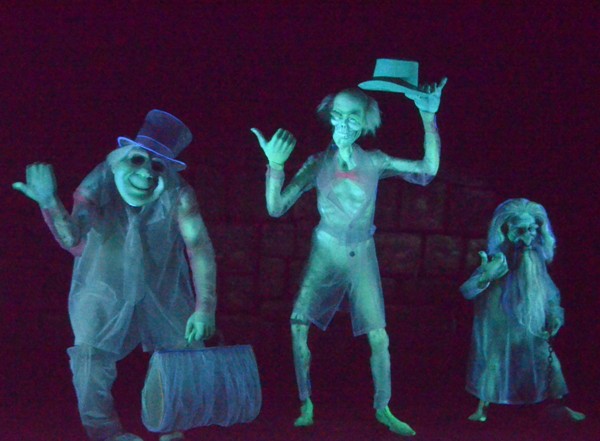 The biggest enhancement to the Haunted Mansion in Disneyland came in 2001.  Following the success of Tim Burton’s film “The Nightmare Before Christmas”, Disneyland premiered the most impressive and expansive “overlay” that any Disney Park has seen to this day – The Haunted Mansion Holiday. 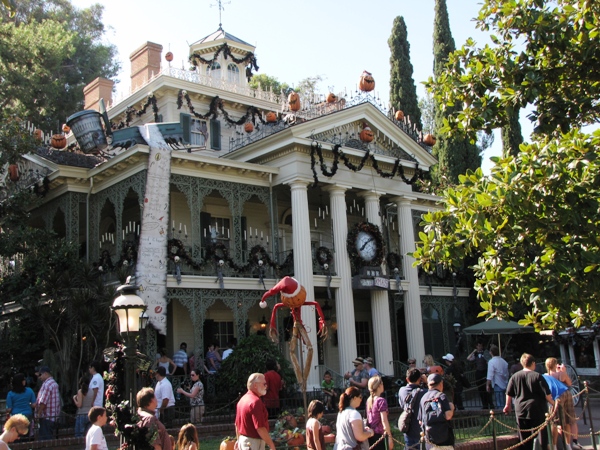 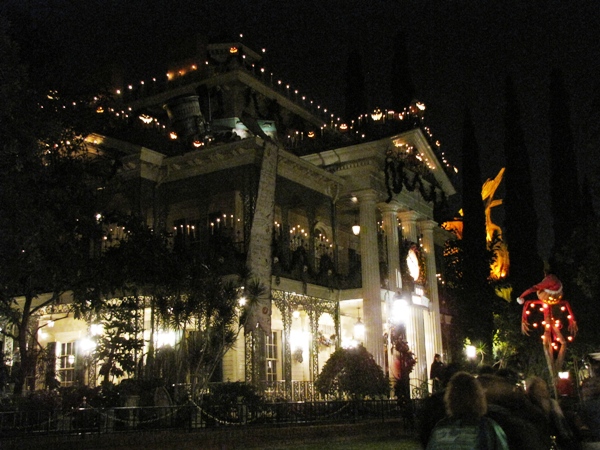 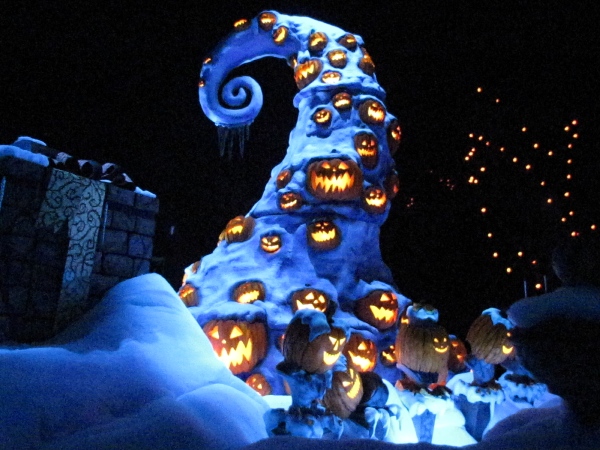 In 2006, there were some improvements to the attic scene with the introduction of a new bride, named Constance.  The changes made to her, and in the attic, help to enhance the story of Constance and her 5 husbands (who unfortunately all met their demise). 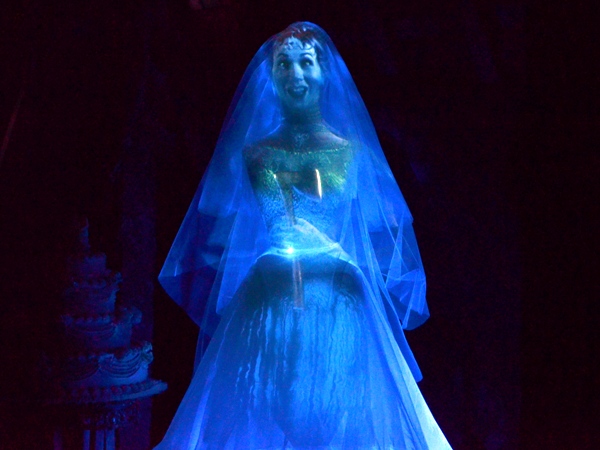 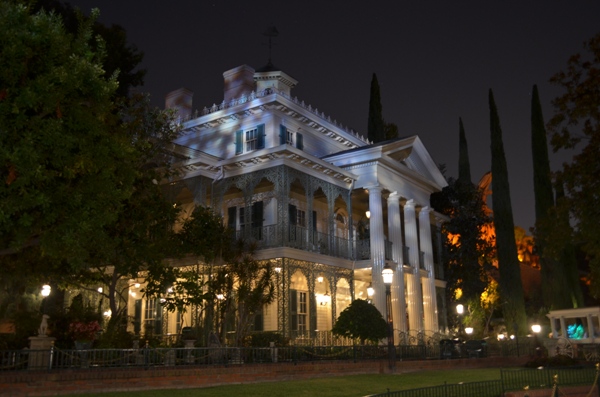