Recently, Adventures by Disney invited The DIS to experience its one-day “Lights…Camera…Magic” tour, so fellow Disneyland correspondent Tony Spittell and I updated our head-shots and resumes and hopped on the bus to Hollywood.  Read on to hear more about our adventures (or listen to Tony and I discuss it on a recent 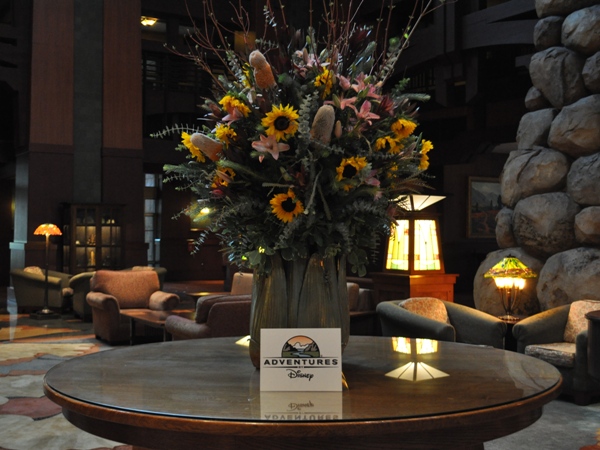 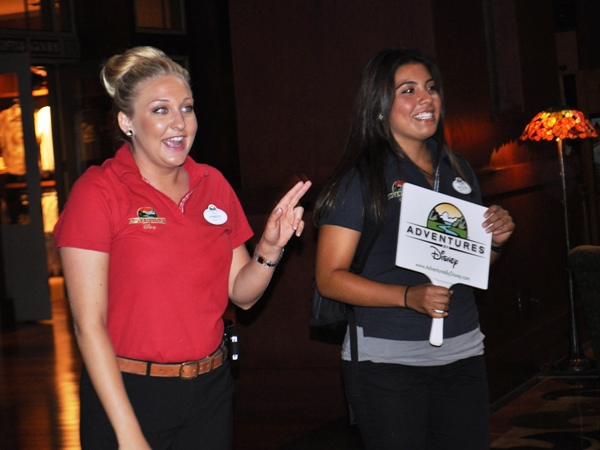 The lobby of the Grand Californian Hotel is the meeting spot for the tour…keep an eye out for the famous Adventures by Disney paddle.  The tour leaves at 8:15am, but if you arrive a little earlier there is complimentary coffee and juice available for adventurers in the Hearthstone Lounge.  Though it might mean getting up even earlier, we suggest you have a hearty breakfast prior to the tour, as lunch isn’t scheduled until 1:00pm.

We boarded a standard charter bus (that included a bathroom and televisions) and headed for Hollywood!  Along the way, our guides Hanneke and Natalia told us a little about themselves, Hollywood and Adventures by Disney.

The first stop was the Hollywood & Highland Center, the home of the Dolby Theatre. 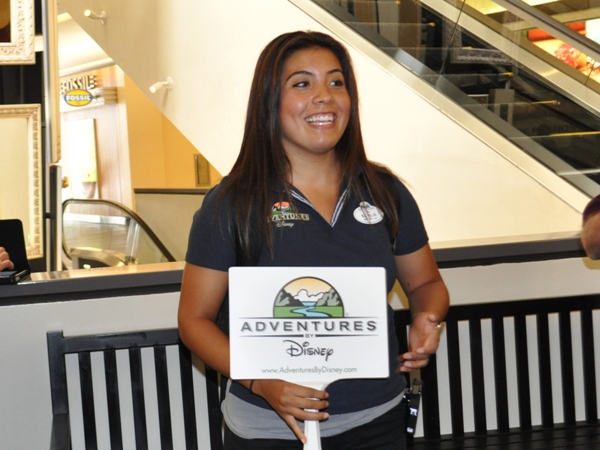 After a quick bathroom break, we headed outside for a look at the Hollywood sign.  Most of the other tourists were crowded in one area to take pictures, but our guides lead us around that to a quiet corner that no one else was using. 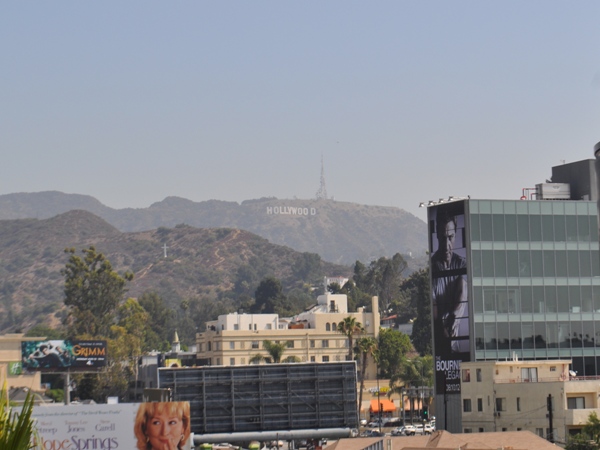 The Hollywood & Highland Center is directly across from several famous venues, including the El Capitan Theatre and Jimmy Kimmel’s studios. 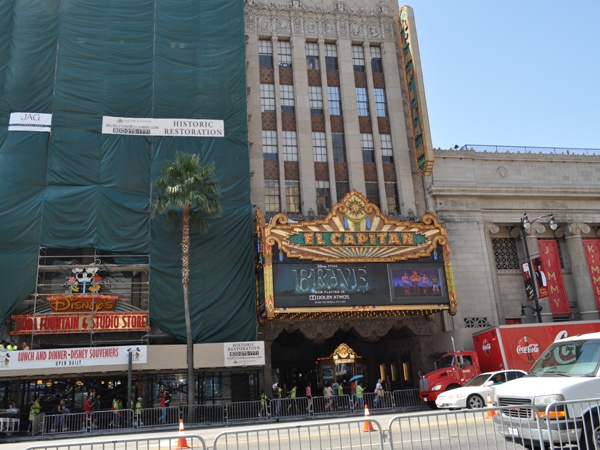 At this point in the tour, you would normally have some free time to explore the area, but we had started a bit late, so we were limited to about 10 minutes.  If there is a particular “star” you want to see, it might be wise to research its location before you head out on the tour. 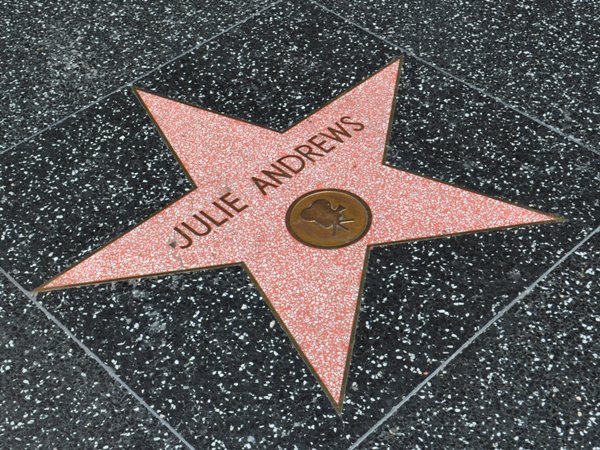 The Center is also near Grauman’s Chinese Theatre, which Adventures by Disney visits when the Dolby Theatre isn’t available. 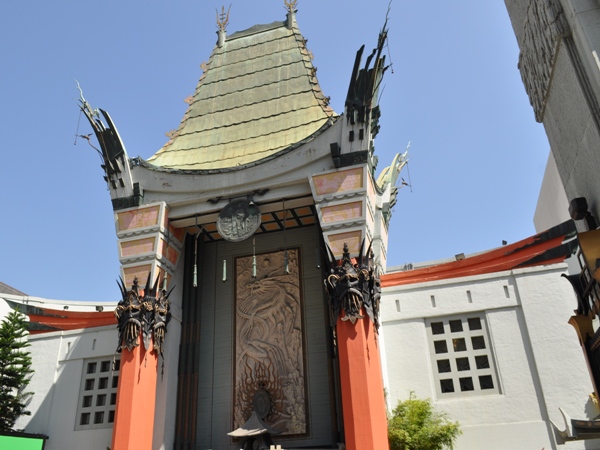 When our free time was done, we made our way to the Dolby Theatre, the home of the Academy Awards and Cirque Du Soleil’s “Iris”. 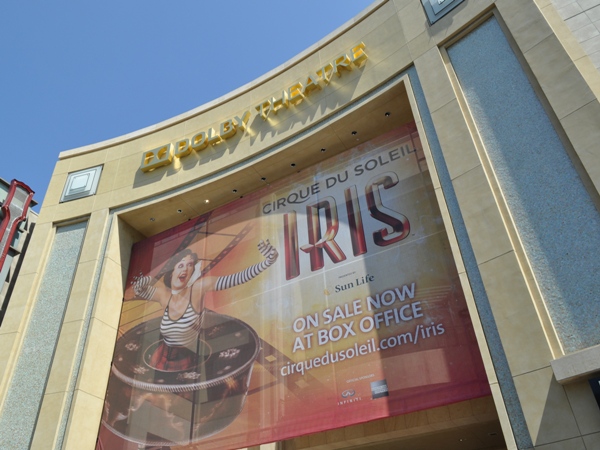 We had our own private tour guide, who also happened to be an usher at the Theatre.  He showed us the lobby of the theatre, the VIP lounge and the inside of the theatre from the second mezzanine, all the while telling us stories about the Academy Awards, including some of his personal experiences as an usher.  There were no pictures allowed inside the theatre, but we did receive a complimentary Dolby Theatre postcard on the way out. 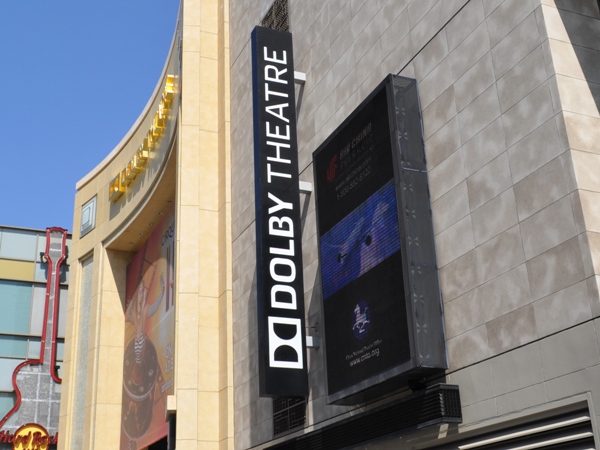 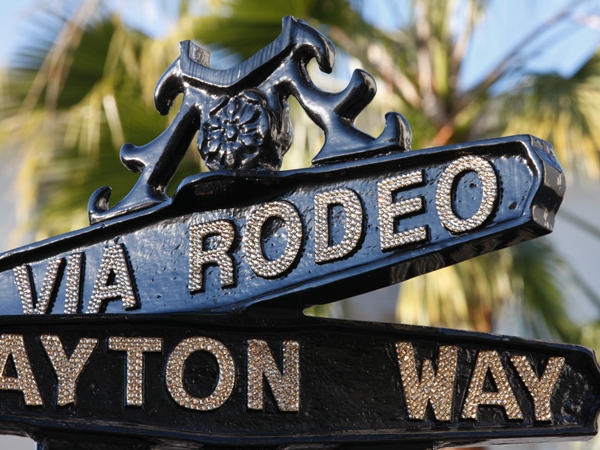 Don, our bus driver, took over the microphone and narrated our tour down Rodeo Drive, through Beverly Hills and down the Sunset Strip.

Our destination was the original Farmers Market, which has now become a huge food court.  We were given a $15 voucher good for any of the eateries in the Market and told we had about 75 minutes to have lunch and to take a quick look at The Grove shopping area that was nearby.  The Farmers Market has every kind of food imaginable, but even the less adventurous should be able to find something (pizza, Johnny Rockets).

We did have a little trouble sticking to our $15 “budget”.  I had a French Dip sandwich (no sides) plus a large soda and ended up with a dollar and some change left over.  Tony had a plate of Greek food plus a bottle of water and had to pay a few cents out of pocket. 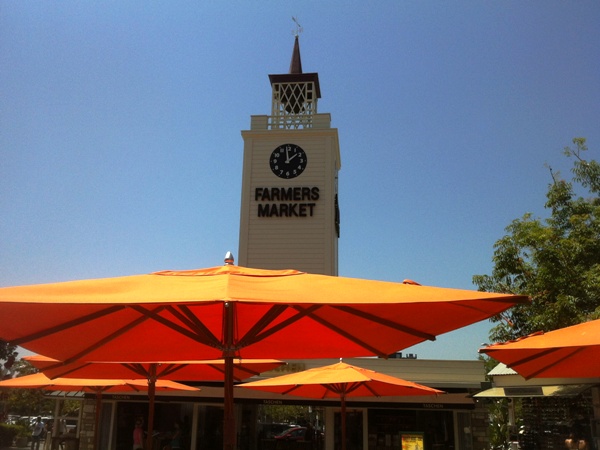 There may have been a little afternoon napping on the bus as we made our way to our next destination, the Walt Disney Studios in Burbank.

The first stop, of course, was Pluto’s Corner, made famous in the film The Reluctant Dragon.  Everyone was given as much time as they wanted to pose and take pictures. 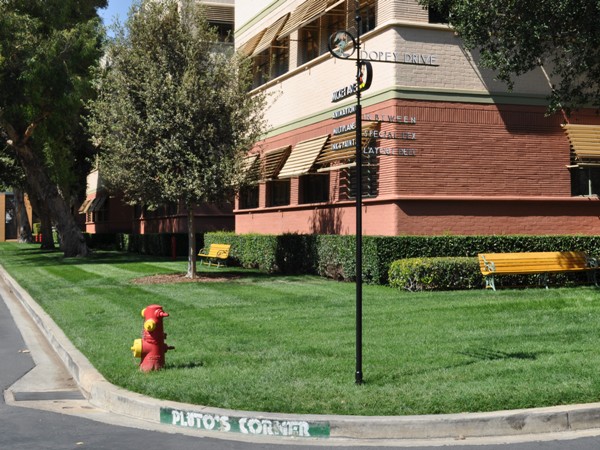 Hanneke then took us into the old Animation building, which no longer houses Disney animators, but offices that are rented out to other production companies.

We walked downstairs through the tunnels that were used to transport the animation cells during bad weather and emerged in another area of the Studios. 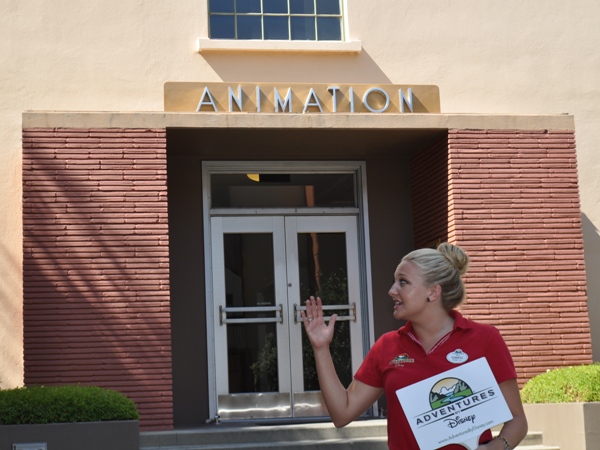 We were then given a few minutes to make some purchases at the Studio Store…basically a mall-like Disney Store, but with a few Walt Disney Studios and ABC items added in.  A few minutes was plenty of time.

Our next stop was Soundstage 2 (the Julie Andrews Soundstage).  One of the stage managers met us there, took us inside and told us a little about the soundstage and how things worked.

Adventures by Disney tries to get guests inside a soundstage on every tour, but it isn’t guaranteed.  It depends on if the soundstage is being used and if a stage manager is available to open it. 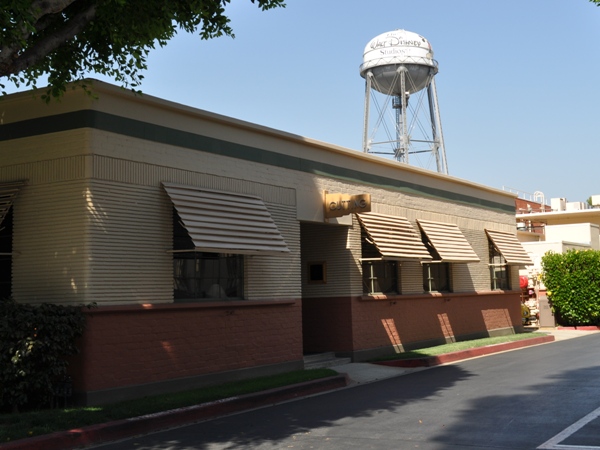 Across the Studios is the Frank G. Wells building, the home to the Disney Archives, and our next stop. 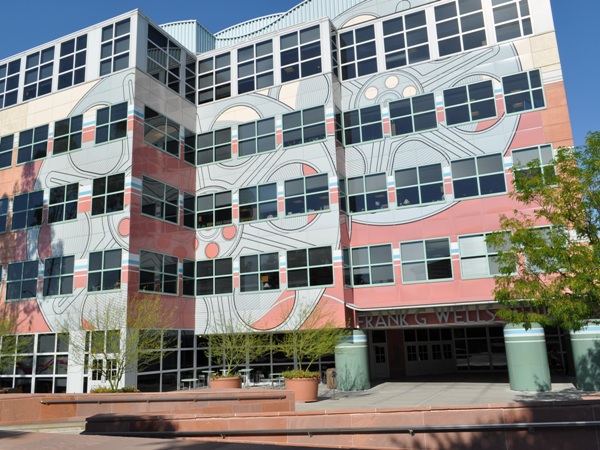 There are several displays from the Archives in the lobby, plus one of three multi-plane cameras made by the Disney company.  There are restrooms available here and there’s also a Starbucks nearby.  Take advantage of the restrooms, but skip the Starbucks, as complimentary beverages will soon be yours….. 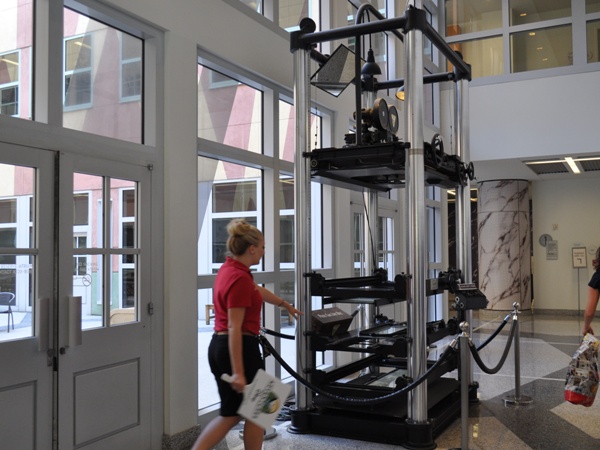 …in the shadow of the seven dwarfs, the Team Disney building and Legends Plaza.  This area contains plaques (most with handprints and signatures) celebrating all the current Disney Legends, plus replicas of the Walt & Mickey (Partners) and Roy & Minnie (Sharing the Magic) statues from the Parks. 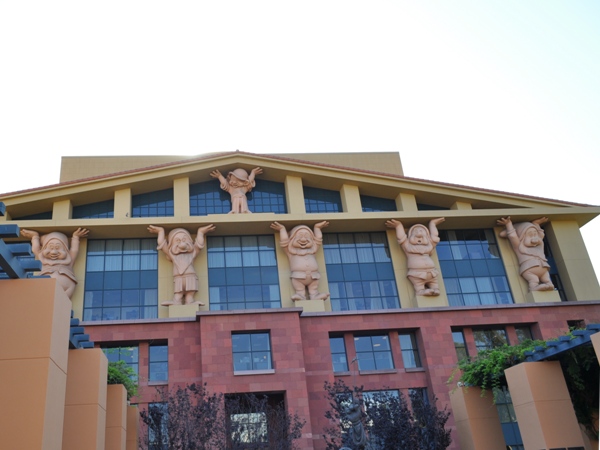 There is plenty of time in this area to take as many pictures as you would like and enjoy a snack plus a soft drink, bottled water, beer or wine.  Unless you’re a very light eater, plan on dinner once you get back to the Disneyland Resort, as this is just a few appetizers.

There are tables and chairs available, so you can chat with your fellow adventurers about their favorite part of their day.

We did receive a couple of surprises during the reception that I won’t get into here (but we did “spoil” on the podcast). 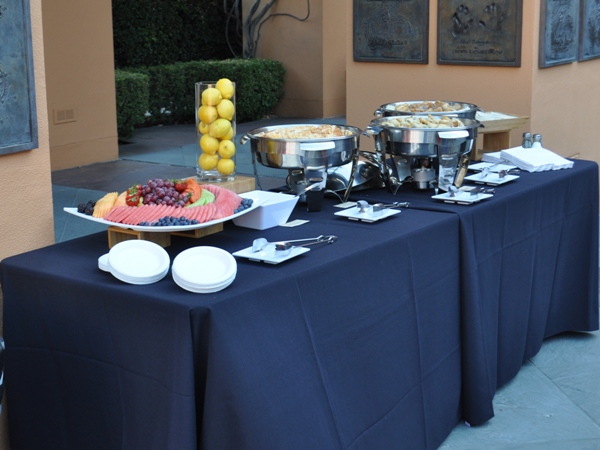 At about 6:30pm, we boarded the bus for the one-hour drive back to Anaheim.  Our Hollywood adventure was now over…and we hadn’t been discovered…or had we?? 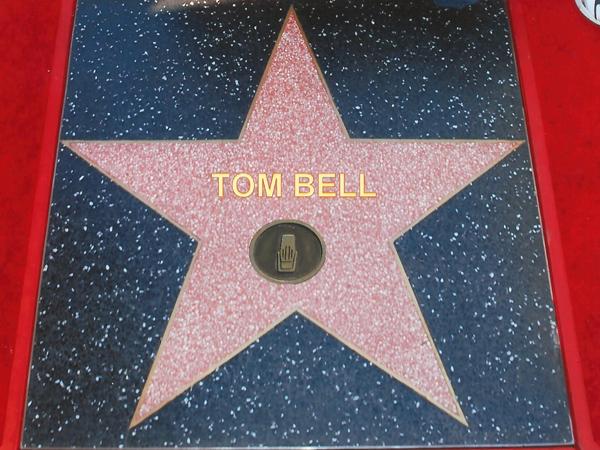