Are you Ready to Conquer the Tower of Terror?

Don’t look now, but we’ve turned the calendar to August.  That means the fall season at Walt Disney World is just around the corner.  This year the folks at runDisney are giving us a treat, or a scare.  I’m not sure which, but it may be a little of both.  This September 29th runDisney is bringing back a popular race to guests and running enthusiasts called the Tower of Terror 10-Miler (sold out).  A race surrounding one of Disney World’s most popular attractions; The Hollywood Tower of Terror.  To learn more about this exciting race and what to look forward to continue through the page break.

With so many guests descending on Walt Disney World at the end of September and early October for the opening of EPCOT’s Food & Wine Festival Disney has seemed to schedule this race at a very opportune time.  In order to bring back the Tower of Terror race runDisney had to move the annual Wine & Dine race weekend to November 9th and 10th.  Not only will we see food everywhere at EPCOT, but we’ll also see birthday candles and streamers as EPCOT will be celebrating its 30th birthday on October 1st.  Over at the Magic Kingdom Mickey’s Not So Scary Halloween Party will be in full swing.  If you like to eat, drink, run, and get scared the Tower of Terror 10-Miler Weekend is certainly the time of year for you.

The Tower of Terror race first debuted at Hollywood Studios in the fall of 2007.  Back then it was called the Tower of Terror 13k.  As many of you running buffs may know a 13k race is a little over 8 miles.  runDisney has upped the stakes for this year’s race giving it a 10-mile distance.  The Tower of Terror 13k races starting back in 2007 were extremely popular making many wonder why they discontinued the race in 2009.  When this year’s 10-mile race was announced many runDisney fans cheered.  Runners took to their computers and signed-up fast selling out this race in a matter of months.  Also part of the race weekend is a morning 5k and a collection of kids’ races at the ESPN Wide World of Sports Complex.

The ToT 10-Miler is a nighttime race (10:00PM) starting in the parking lot of Hollywood Studios and ending behind the races featured attraction the Tower of Terror.  After the race runners, family, and friends can stay inside the park until 3:00AM for an after-race party.  The Disney Villains Hollywood Bash will feature most of Hollywood Studios attractions, bands, DJs, food and drink all throughout the park.  This is a hard-ticketed event and you’ll need to purchase a separate admission ticket if you do not run in the race.

The race course takes runners through a course full of haunted sets, characters in their Halloween garb, and spooky trails.  This year’s course starts at Hollywood Studios and moves runners to Osceola Parkway and eventually into ESPN’s Wide world of Sports complex.  After existing WWoS you head back to Hollywood Studios for a theme park run eventually ending behind the races main attraction; the Twilight Zone Tower of Terror.  This is the perfect race complimenting Disney’s Halloween-themed season and showcasing what many believe to be Disney World’s best attraction.  Like any runDisney event medal designers were busy creating this year’s race finishers masterpiece.  Here’s a look at the medal waiting for runners as they cross the finish line.  The medal features an elevator that goes up and down and glows in the dark.  They should make the after race party a “glowing” success! 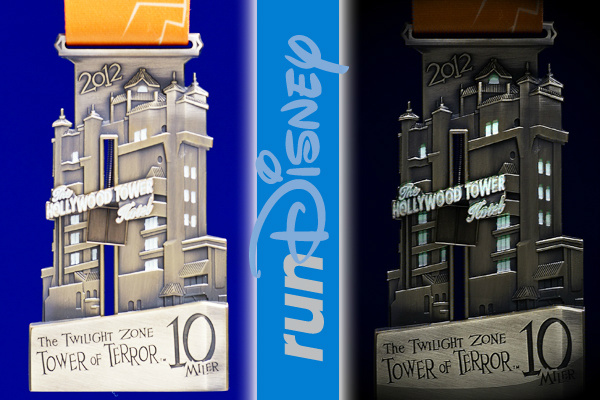 Who’s ready to conquer the tower?  Will you run in the Tower of Terror 10-Miler and hit the attraction after you’ve completed your race?  Just remember to watch your medal around your neck as it floats in the air during your free-fall.  A true Tower of Terror experience. 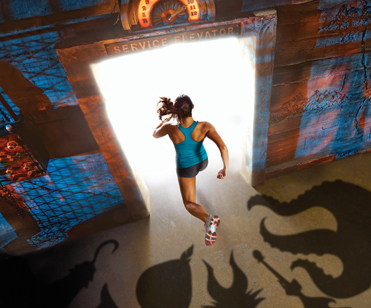 There are always terrific special events going on around October 1st at Walt Disney World.  This year is no exception; the kick-off to EPCOT’s Food & Wine Festival, EPCOT’s 30th birthday celebration, and several Halloween events around Disney property.  The Tower of Terror 10-Miler race weekend is simply icing on the cake, but it’s what runners and race fans are looking forward to most over a weekend full of events.  Well, the food won’t be bad either.  Grab your running shoes, pack your Alka-Seltzer, and bring your Dramamine because it should be a frightful race weekend full of fun and excitement.