Beat the Heat at Epcot’s Innoventions

A lot of guests tend to overlook Innoventions at Epcot when they visit the Walt Disney World Resort.  Admittedly, our family used to be like that too – until one day when we ducked in to get out of the heat for a little while and realized what a gem we had been passing up!  It’s now one of our sons’ favorite places at Epcot!  Read on to find out more about the “Where’s the Fire?” exhibit at Innoventions West. 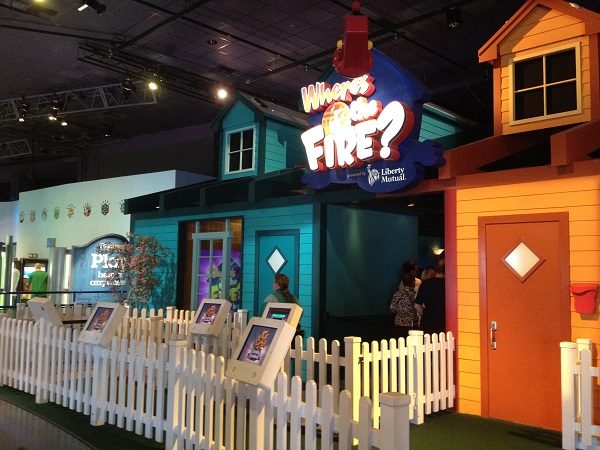 In case you didn’t know, there are actually TWO Innoventions buildings – East and West.  For this blog, we’re going to stay in the West building, but check out this page to read about and see pictures of the East exhibits.  My boys are fascinated with anything having to do with emergencies – ambulances, policemen, fire trucks, etc. – so when we saw this exhibit, we knew this was a must-do.  “Where’s the Fire?” is sponsored by Liberty Mutual and is a great hands-on way to teach kids (and adults!) about fire safety in and around your home.  The learning actually starts while you’re standing in line for the game.  There are 5 touch-screen computers in the queue that allow you to take a quiz called “Burning Questions” about fire safety.  It starts out by showing a Christmas tree catching fire, and you have to answer the questions as fast, and as accurately as you can, before the tree goes up in flames.  It sounds easy, but there were actually a lot of facts that I didn’t know. 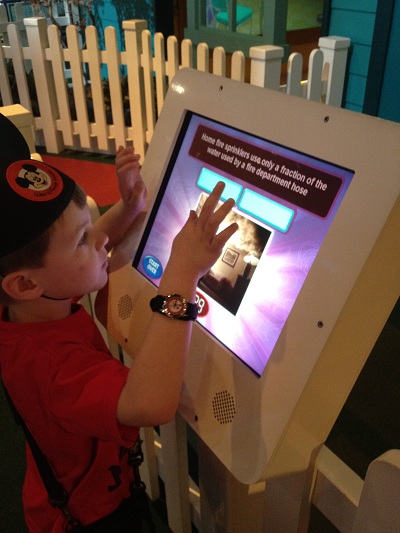 Once it’s your turn, you move inside the “house” to start the game.  To play the game, you work with a partner as part of a larger team.  The object of the game is to use your flashlight to illuminate fire hazards in different areas of the house.  The cast member explains the game, shows you a map of the house, passes out flashlights, and then it’s time to start!  You and your partner have to work together to find potential hazards or you lose and your house catches fire.  On the screen, the flashlights show a blue circle, until you shine it on a hazard.  When you and your partner shine your lights at the same hazard, you click a button and you get a point.  If you click on something that isn’t a fire hazard, you lose a point.  The game is timed, and when you have found all the hazards in a room or have run out of time, you move to another room in the house. 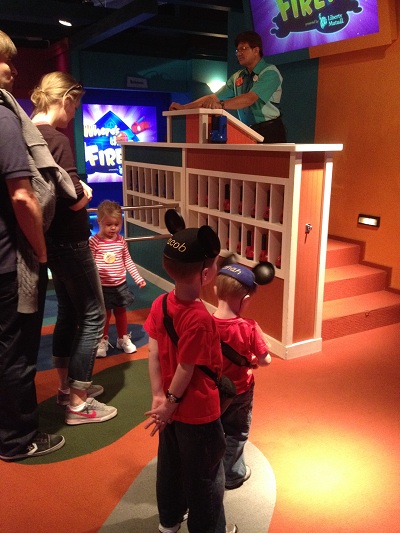 Image: Listening to the rules of the game. 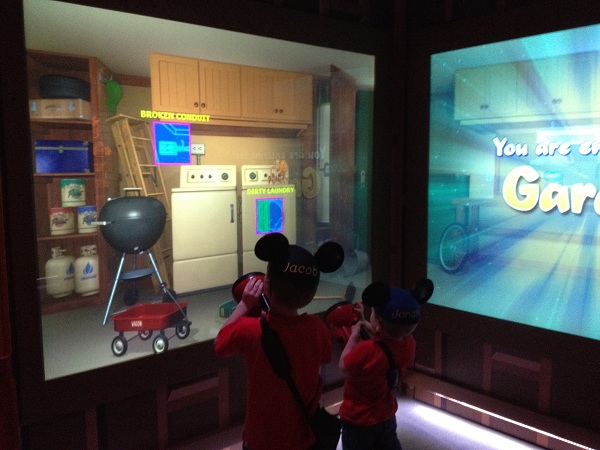 Image: Searching for fire hazards in the garage.

When the game is done, everyone gathers back at the front of the house to hear which team won – the “Findmores” or the “Searchwells”.  In case you were wondering, our team lost every time.  To be fair though, I was working with kids… 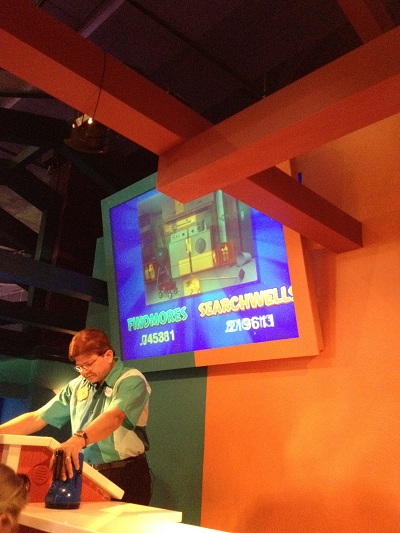 Image: Finding out which team won. 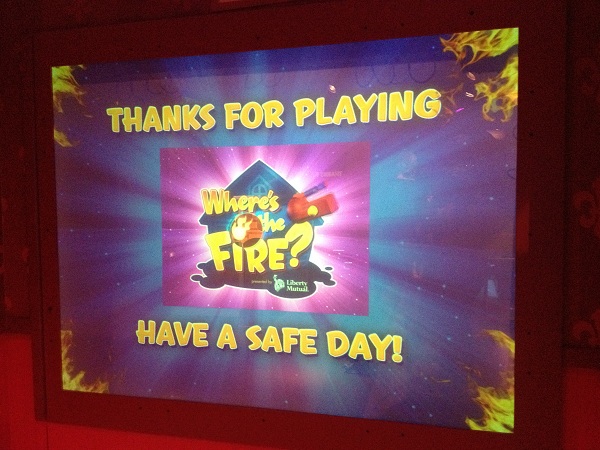 Image: We saved the house!

When you exit the house, you come to the next part of the exhibit – a model house that teaches kids how important it is to have an escape plan in case of fire. 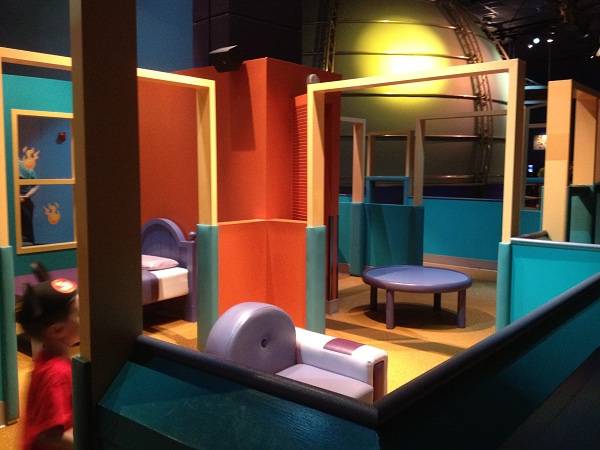 Image: The “Play it Safe” house.

The kids go into the house and pretend to be hanging out in one of the rooms.  A cast member comes and discusses exit plans with them and how the whole family needs to have one central meeting place away from their home.  A fire alarm sounds and lights representing fire shine down into the room.  The kids have to crawl out of the house, avoiding the “fire.”  Once they get out, they run to a sign on the floor that marks the meeting place. 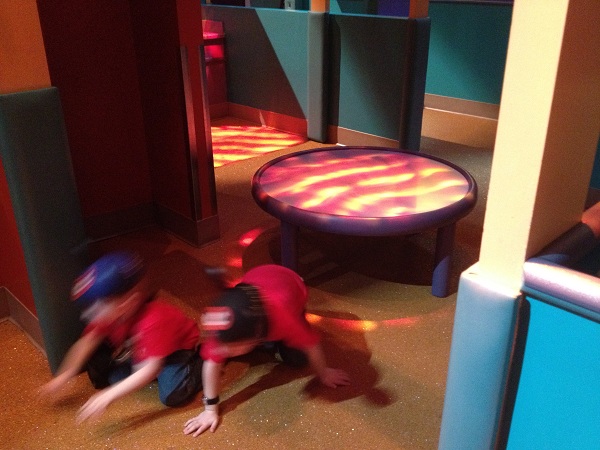 Image: Crawling to escape the fire! 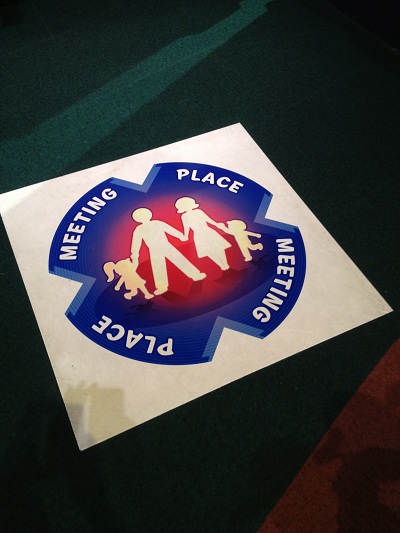 Once you’re done with the escape plan lesson, you can take your picture in front of a real fire truck and email it to your family members back at home. 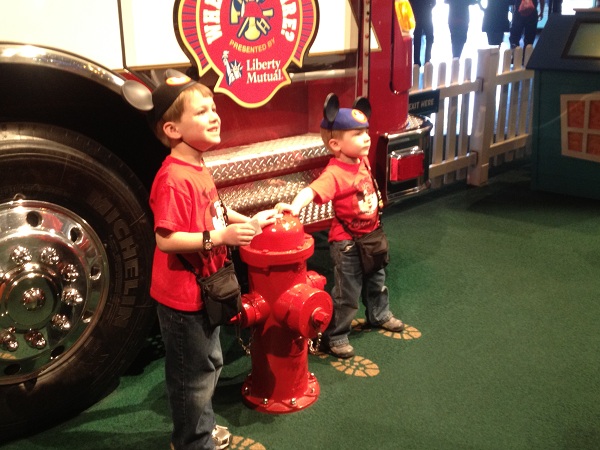 Image: Taking a picture to email to Grandma. 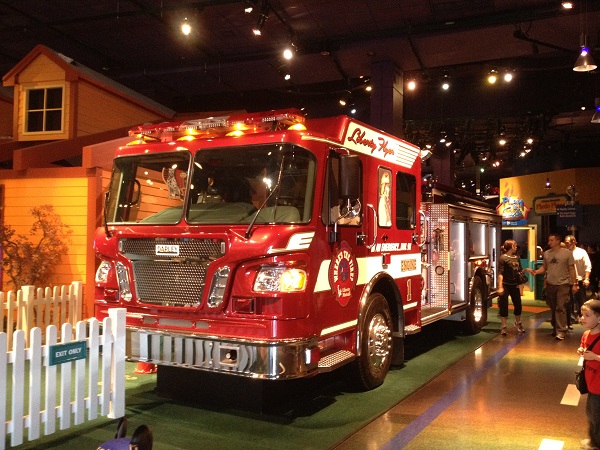 The last exhibit in this area in actually on the fire truck.  There is a large display of actual fire patches from fire departments around the country.  This is really neat to see.  Next to this is a computer monitor that will show you even more patches from all 50 states. 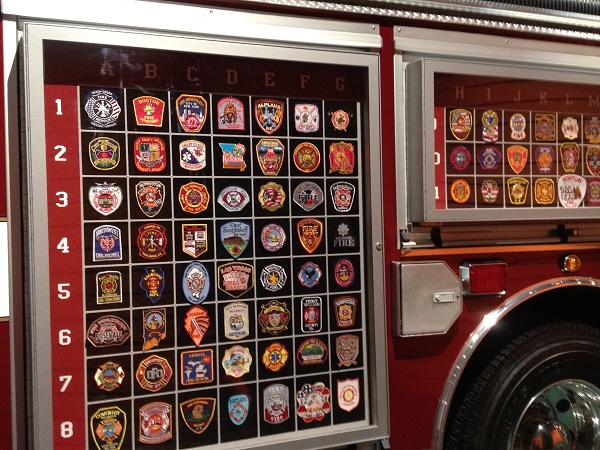 Image: Fire patches from across the country.

We were really impressed with the cast members that worked with our kids.  They were patient (which is no easy feat with a 6- and 4-year old who have LOTS of questions and vivid imaginations), they knew their material, and they made the game fun.  The place was almost empty the day we were there, but they still gave our family just as much attention as if they’d been working with a larger group.

Try to make time in your next visit to check out the exhibits at Innoventions – you may find that there’s more here than just a break from the heat! 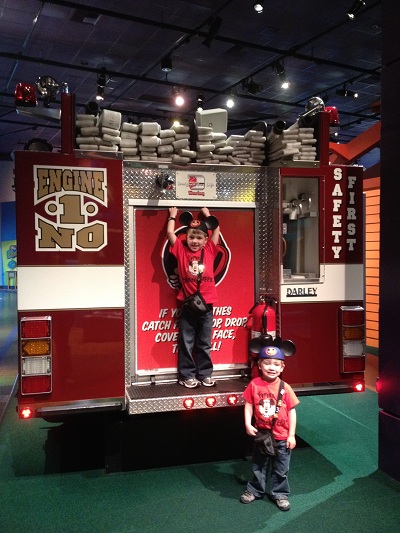 Image: Jacob and Jonah are proud of their fire safety knowledge!