Eclectic, enticing, bizarre, strange, fanciful, fascinating, curiouser and curiouser!  The new tradition of nighttime street parties continues at Disney California Adventure and they just keep getting wilder.  The newest edition is inspired from Disney’s recent film Alice in Wonderland and is called the Mad T Party (as in Alice’s Tea Party).  Taking its design concepts from the Tim Burton film, this street party is far from a calm afternoon gathering.  It features a collection of characters that have not only gathered for a festival, they have all gone totally “mad”!  This is much more than just a street party.  And the best part is… they’ve taken you down the Rabbit Hole with them! 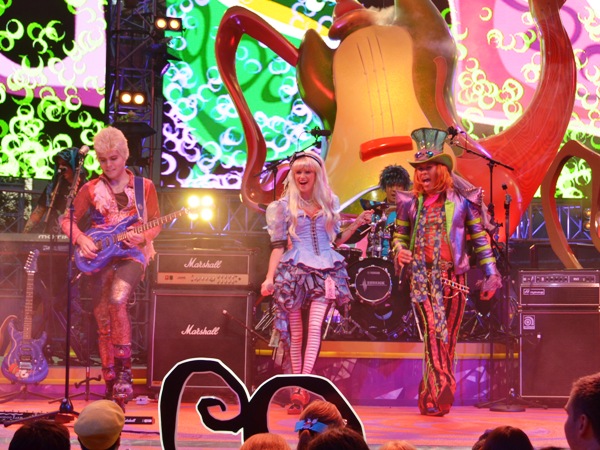 The Mad T Party, like the other street parties at California Adventure is located in the back side of the newly renamed Hollywood Land area.  Like the other street parties, the Mad T Party features lively music, crazy characters, specialty acts and entertainment, food and special “adult” drinks and a few more surprises thrown in.  The entertainment is non-stop and once again you are overwhelmed with sounds and sights as soon as you enter the area. 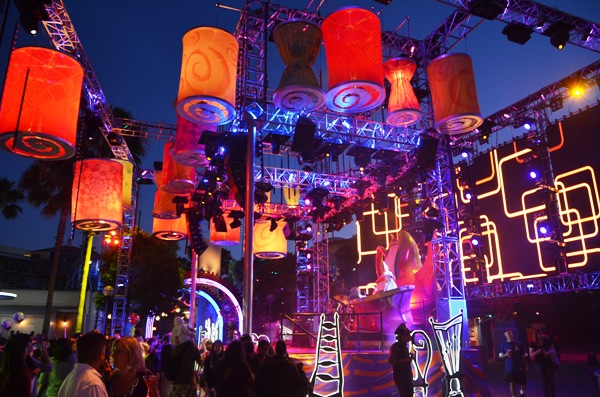 The size of this party is a bit smaller than the previous ElecTRONica street party.  ElecTRONica covered both the main street of Hollywood Land and the back section from Muppet Vision 3D to Monsters, Inc.  The main street is now taken up by the Red Car Trolley (making overhead lighting and sound towers difficult) and so the Mad T Party has been placed into the entire back area.  This means that more folks are concentrated in a smaller area, but they have packed in more facilities, so you’re just not walking around as much. 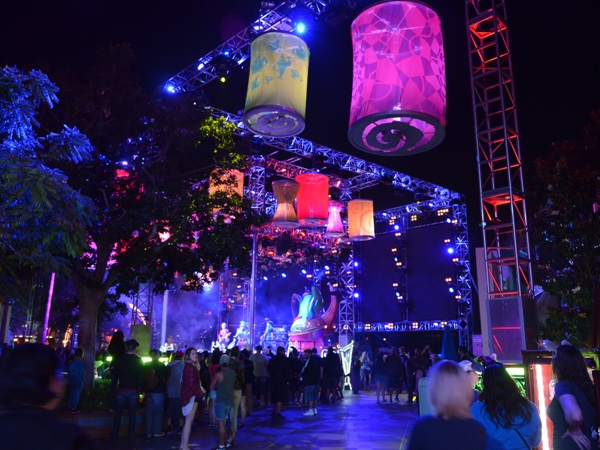 The main entrance to the Mad T Party is a clever lighted archway which represents your descent down into the Rabbit Hole.  There is a little pre-show at the beginning of the event and the iconic Tweedle Dee and Tweedle Dum lead you into the Party.  From the start you know you are entering a bizarre world just by the Tweedle boy’s costumes.  This is representative of all the strange costumes you will encounter throughout the area. 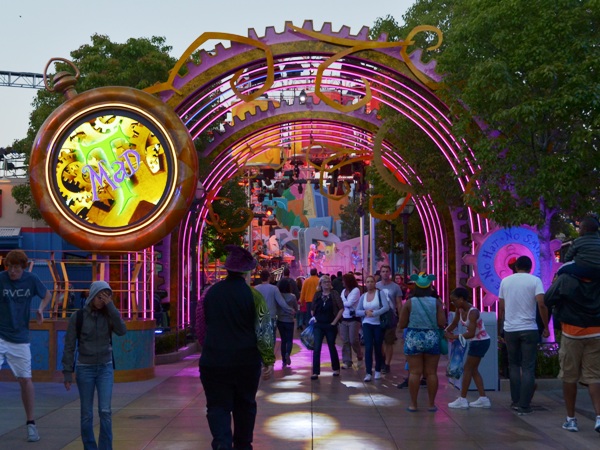 The main performance stage is the centerpiece of the Mad T Party.  Hosted by the Mad Hatter himself as lead singer and performer, each member of the band represents a different character from Alice in Wonderland and each one has an amazing costume.  The Dormouse plays lead guitar, the March Hare is on bass, the Cheshire Cat has the drums, and the Caterpillar is the keyboardist.  Each one is unique and together they make quite a band. 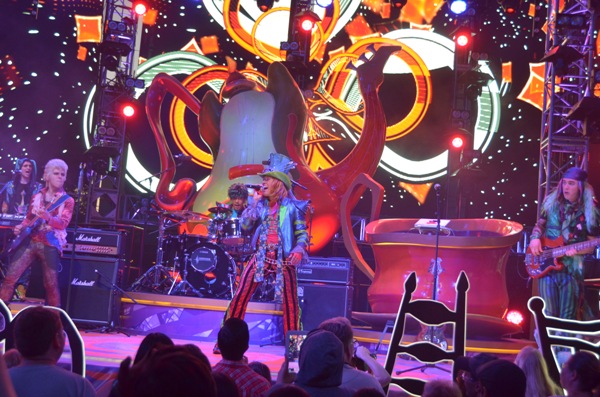 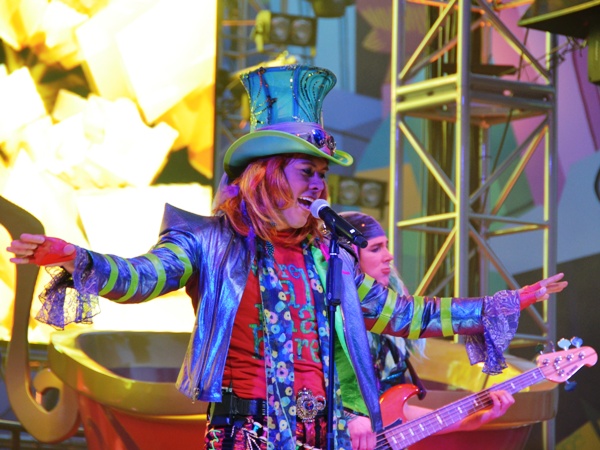 And of course, what band would be complete without their featured solo performer – and for the Mad T Party it’s Alice herself!  Alice is not the shy little girl she once was when she first fell down into Wonderland; she now has a killer voice, a magnetic personality and the biggest smile to light up the stage.  Also dressed in a wild costume (that reminded me a bit of Cyndi Lauper), Alice steals the show.  And judging from the hoots and hollers, the rest of the fans agree (including me).  The songs are a mix of ‘80s to modern, but one of my favorites was the classic Blondie tune “Call Me” with Alice as soloist and accompanied by a flourish of lighting and graphic effects on the stage’s back wall video display. 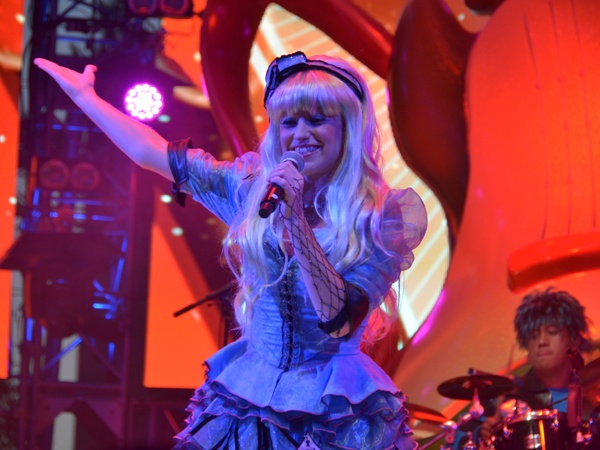 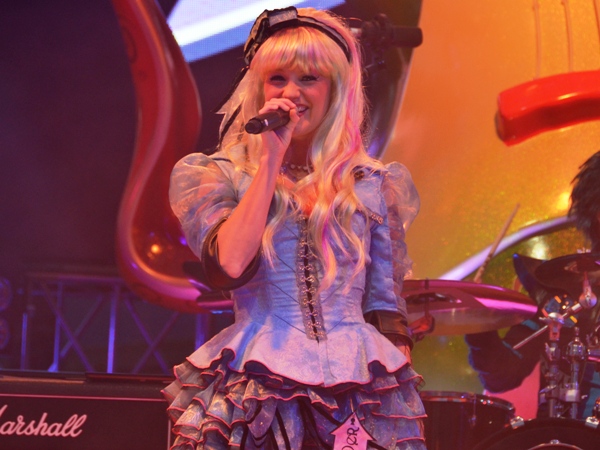 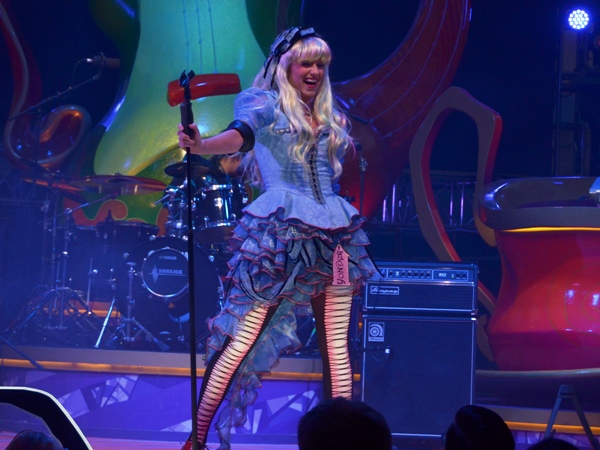 Alice and the Mad Hatter frequently sing together and the pair is perfect.  The rest of the band members also have their solo time.  This concert is a bit different for the street parties (compared to the regular dance music), but it really makes the show and gets a huge reaction. 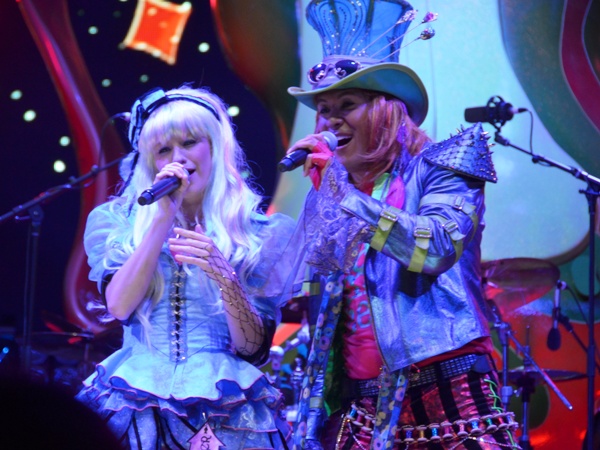 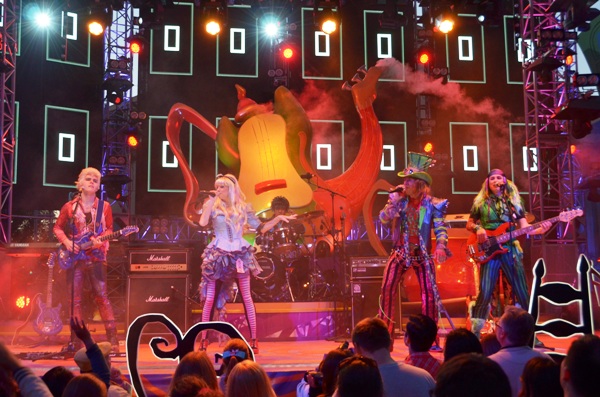 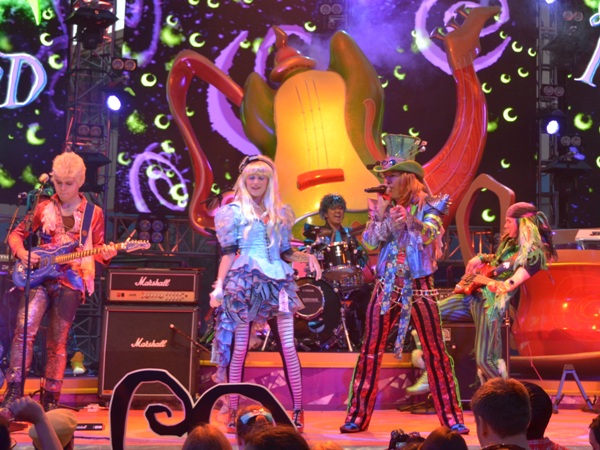 When the band isn’t playing, the tunes are being directed by the master time keeper and “DJ” himself, the White Rabbit with his signature white lighted ears.  Every place you turn you are confronted with another strange character and each one with their own special personality. 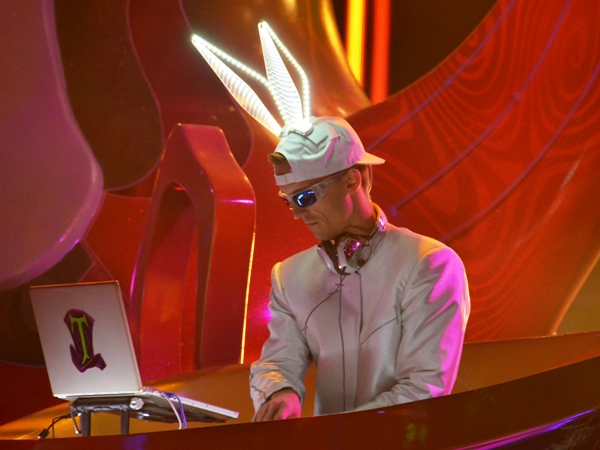 The Mad T Party also has a secondary stage across the way called the House of Cards.  This leaning “A-frame” style structure is very unique and the acts that perform here are just as unique.  Performances alternate from the main stage to the House of Cards stage and back again.  It has the crowd moving as the action and music move. 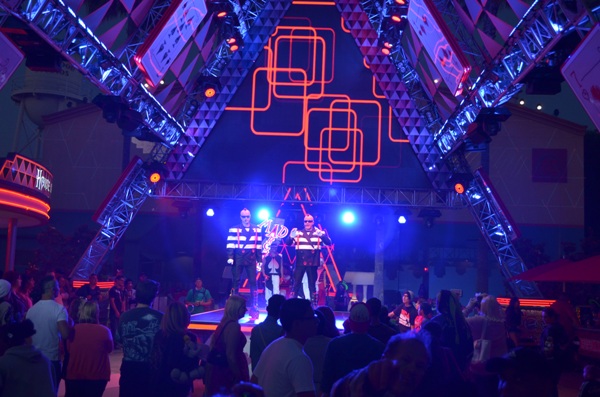 Perhaps the strangest, the most confusing, and the most entertaining specialty acts that performs on the House of Cards stage is what the White Rabbit calls “WHO R U?”  Yes that is the name of this “performer” – “WHO R U?”  And really, that is a very good name because this character is the maddest of all! 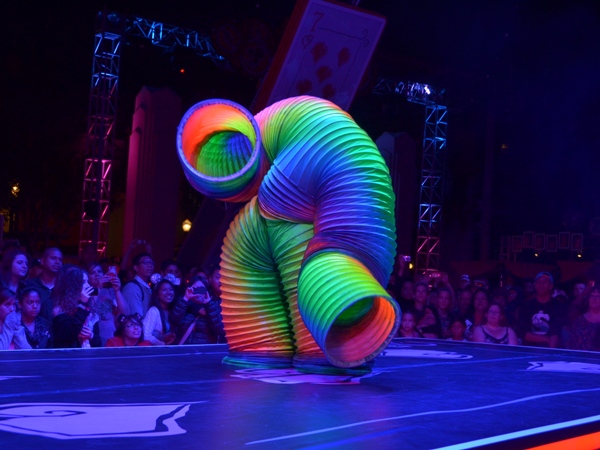 “WHO R U?” can only be described as a moving “Slinky-like” character that takes on constantly changing shapes.  “Dancing” to a music track, “WHO R U?” moves and changes into indescribable twisted positions that have you wondering what in Wonderland are you looking at and what is it doing?  This is truly curious.  It’s hypnotic; it’s peculiar; it’s odd; it’s inexplicable; and I love it!  If nothing else, this one act is worth paying a visit to see the Mad T Party. 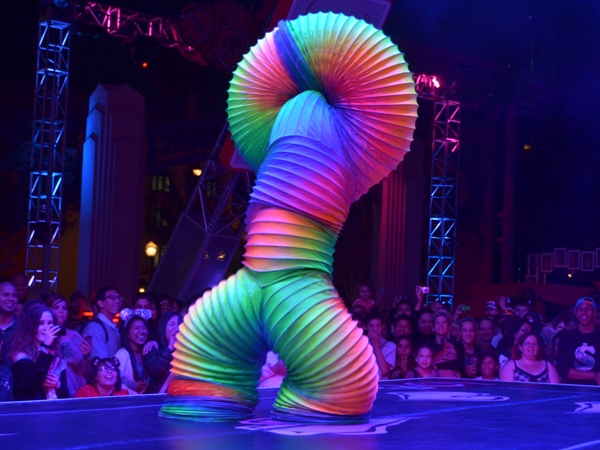 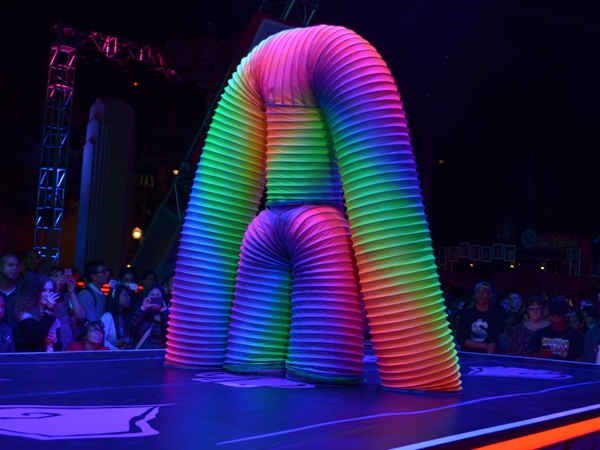 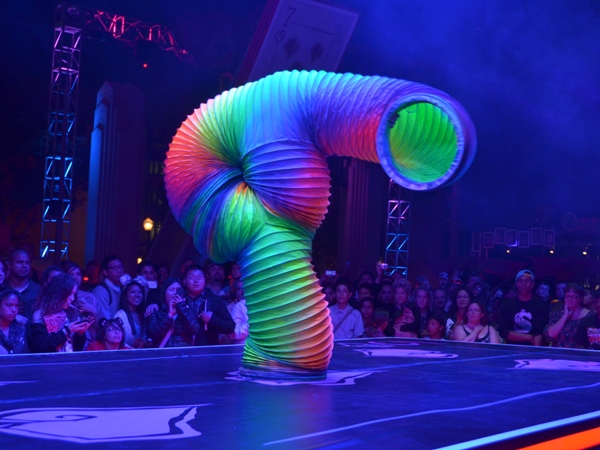 The Mad T Party also has the now familiar alcoholic drinks served from the clever “Drink Me” stand and also from the House of Cards bar.  Snack food is also available in the area. 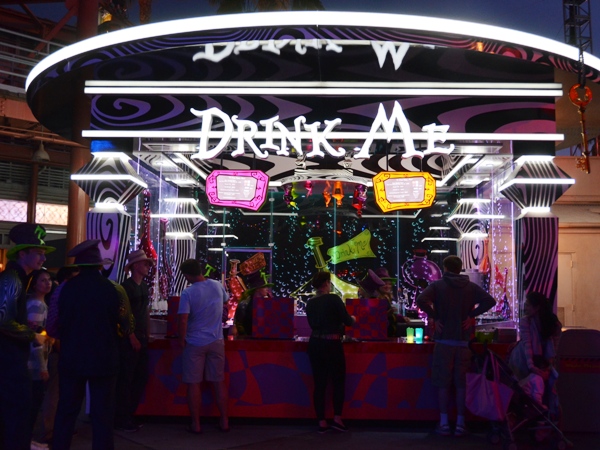 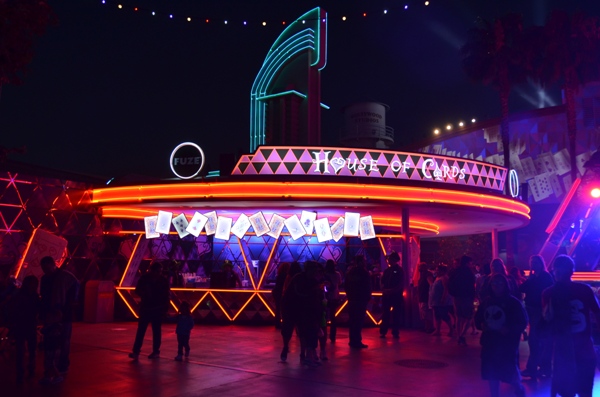 The games arcade returns as the Mad Arcade and features games themed to the Mad T Party.  Be sure to get a couple of the special Mad T Party tokens.  And just outside you can get your face painted in its own Mad style. 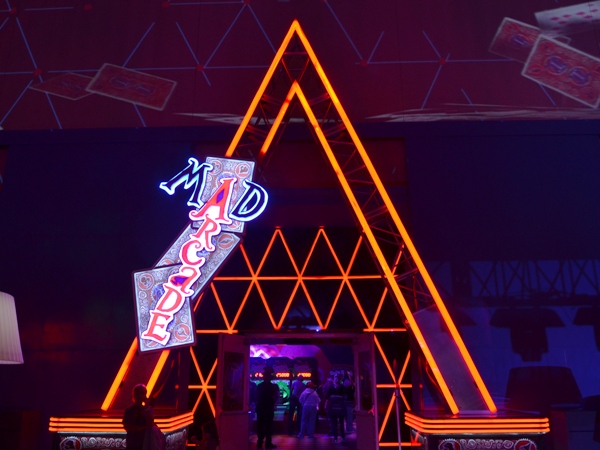 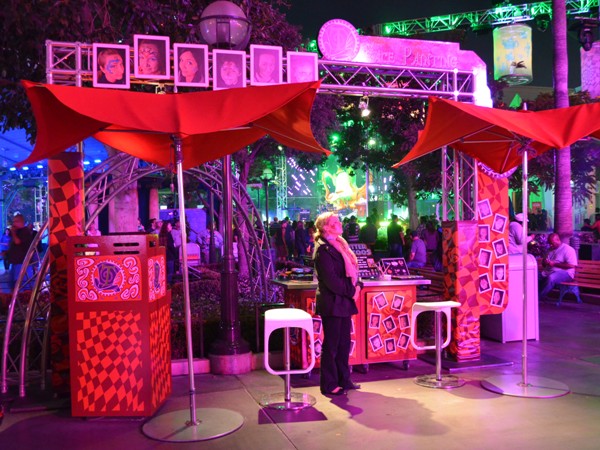 And of course, you can get your Mad T Party souvenirs with some great new clothing and accessories.  I don’t know… is it me? 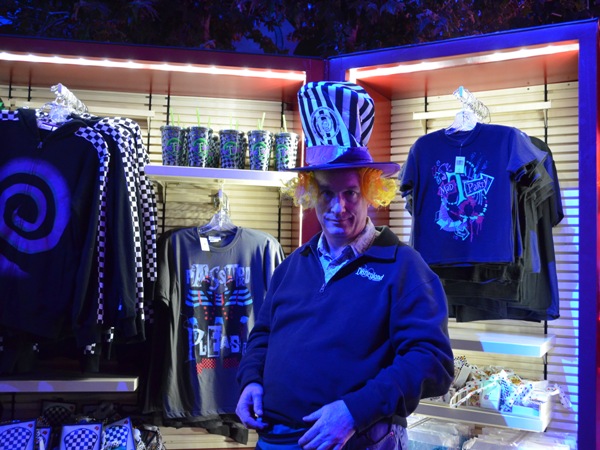 By the end of the night you’ll think you’ve gone totally bonkers, lost your mind, gone round the bend.  But don’t worry… all the best people do! 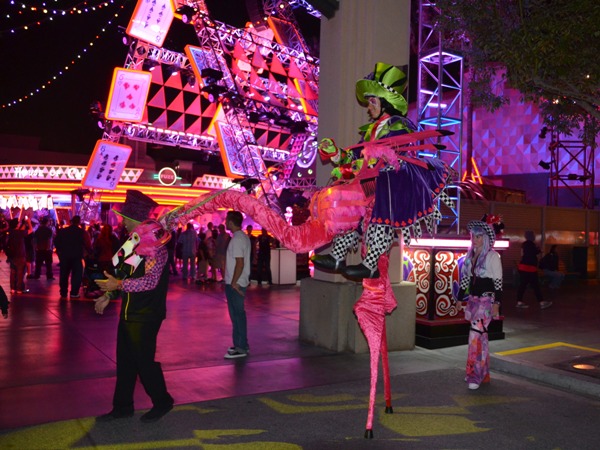 The Mad T Party has had “soft opening” previews which were open to all park guests for a few weekends now, and I was able to attend one of those previews.  The official opening is June 15 along with the rest of the official DCA openings.

I think I will have to return and give some more updates, because there is even more to cover here.  See you down the Rabbit Hole! 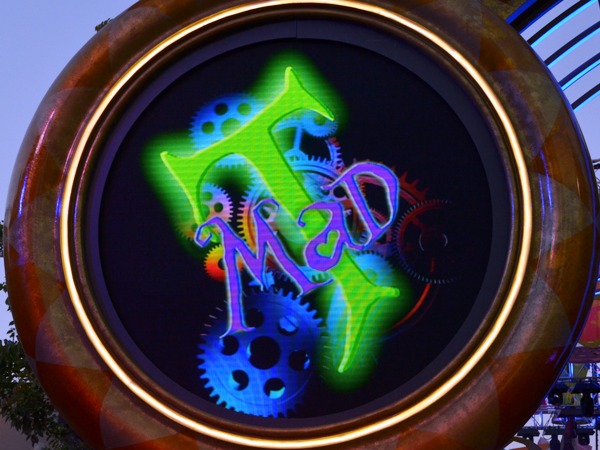