Float out of the new Disney Fantasy Cruise Ship

On the morning of January 8th, we planned to go to Papenburg Germany to the Meyer Werft shipyard for the float out of the Disney Fantasy.  Our day started at 5:00am when the alarm clock went off. To shorten our drive we stayed the night before with family that lives in Leeuwarden. This way it would only be a 1.5 hour drive, instead of a 3 hour drive to Papenburg. We planned to leave at 6:00am, but we ended up leaving at 6:15am which was good by our standards!

We hoped for an experience that would be similar to the one we had with the float out of the Disney Dream. We figured that the best thing to do was to get there early, before the crowds, to get a parking spot nearby. In our opinion we had to arrive just before sunrise, which would be around 8:00am local time. By the time we arrived (7:30ish) it was still pitch black outside and there was literally nobody there. We could park in the parking lot in front of the inner harbor. Shortly after we arrived it started to rain. Even though it was raining we really wanted to get our first pictures, so we got out of the car and walked towards the dock where the Fantasy was floating.

After we took a few pictures, we could see that this float out wasn’t going to be a huge event like when the Disney Dream floated out. When we went to see the Dream there was a fence between the parking lot and the waterside and in between Disney had set up fireworks. This time there was no fence at all which meant no fireworks from the ground.

We went back to the car and stayed in the car while it was raining (it actually started pouring down) and it rained and it rained and it rained. Yvette took a small nap and Emiel played games on his iPhone. In the meantime it became colder and colder in the car. Finally when it became dry outside (this was around 10:00am) we walked to the main area where they had restrooms and snack carts. It was then that we discovered they had set up a huge tent with a heater inside, so it was warm and comfy in the tent.

After getting warmed up in the tent we went outside again because it was 11:00am. The float out was supposed to start at this time. Even though Germans are known for making strict schedules, Meyer Werft is the exception: no float out at 11:00am. Disney cast members however started to hand out Mickey hands with ‘Disney Cruise Line, Disney Fantasy’ written on them. Yvette collected ‘a few’ of these (we now have around 25 of them at home).

Looking back the delay was a good thing, because it gave us the opportunity to take a look at the large tent that was set up at the other end of the parking lot. This tent was overlooking the whole inner harbor. When we approached the tent we saw signs posted stating that there was a private Disney event going on. We were standing there, looking around when we saw Karl Holz, President of Disney Cruise Line, standing in front of the tent. When we asked if we could take his picture he said, “Sure, why not.” Notice the Mickey hand Karl is holding.

After standing there for another few minutes we came up with a great idea! Why not ask Karl to sign a few of these hands and auction them off for the Give Kids the World Power of 10 Fundraiser?! When Karl was walking past us to do an interview with an American TV station Yvette asked him if he could please sign a few of these Mickey hands and he said he would if we could provide a Sharpie or a pen.
So now our next issue was to find a Sharpie…. Of course we didn’t have a Sharpie with us, but with a few hundred Disney cast members nearby the solution was simple. Ask the nearest cast member and he or she will do the utmost to get you a Sharpie or a pen! Eventually one of the cast members found a pen for us (surprisingly none of the cast members were carrying Sharpies either), so when the interview was finished we walked over to Karl Holz again and he signed some Mickey hands for the Power of 10 Fundraiser. 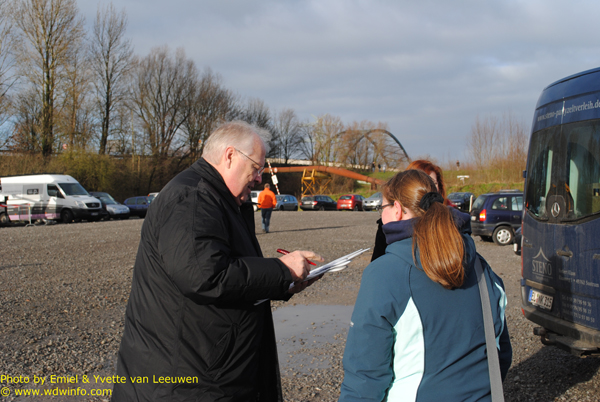 After all of this we decided to get all our Mickey hands out of the way and put them in the car. We passed a few cars that belonged to people attending the private Disney event and because they are VIPs they have credentials to park in the main parking lot even when it’s full for the normal peeps. We saw the credential for parking that stated Disney Fantasy Float Out event January 8th. So we think this means that the Fantasy was never supposed to float out on the 7th. There was no way they could have made new credentials and mailed them out to everybody in time.

We then found a spot a little further away and up a small slope, where we could overlook the harbor and had a perfect spot to watch the float out. Only 10 minutes after we found our spot the Fantasy started to float out of the building dock.

It looked like the Fantasy was anxious to come out of the dock and show herself because she floated out pretty quickly. Of course Mickey and Minnie were also present. When the Fantasy was half way out there was a firework display that came from the ship.

It only took a small amount of time before the whole ship was outside the dock.

After the Fantasy was totally outside they set off another set of fireworks and officially presented the Disney Fantasy to the audience. At this time they also blew the ship’s horn. It made the traditional Disney Cruise Line sound (“When You Wish Upon A Star”).

We walked towards the ship to take a closer look at the Fantasy. By that time the tugboats where still getting her into the right position.

The stern is decorated with Dumbo the elephant and the bow has Sorcerer Mickey.

We grabbed something to eat (a bratwurst and a currywurst) and we tried to warm up a bit in the tent, but that didn’t work, so we decided to leave and start our 3 hour drive home.  When we drove past the Disney Fantasy it was clear that they didn’t want to waste any time because Meyer Werft had already started to work further on the Fantasy. We saw a large crane lifting parts to the upper deck.

We are planning to be at the Ems conveyance of the Disney Fantasy that is supposed to be in about 2 weeks and we will report back then.