On October 7, 2011, The Walt Disney Company filed a report with the Securities and Exchange Commission which formally reported the terms of a new employment contract between the company and President and CEO Robert A. Iger. Mr. Iger’s bonus targets increase significantly in the new agreement but, perhaps more significantly, the new employment agreement is expected to be the last between Walt Disney Company and Iger.

The specific terms of the agreement were not disclosed but the SEC filing summarized the significant changes to the existing agreement.

WDC states that it entered into the 2011 Agreement with “in order to secure access to Mr. Iger’s leadership and experience for an extended period and to provide for a smooth transition of his duties and responsibilities as CEO toward the end of that period.”

The 2011 Agreement provides that Mr. Iger will continue to serve as WDC President and CEO through March 31, 2015.  Next year, Iger will also become Chairman of the Walt Disney Company Board when existing Chairman John E. Pepper retires at the 2012 Annual Meeting.

From April 1, 2015 to June 30, 2016, Mr. Iger will continue to serve as Chairman as an employee of the Company but will no longer be President and Chief Executive Officer. 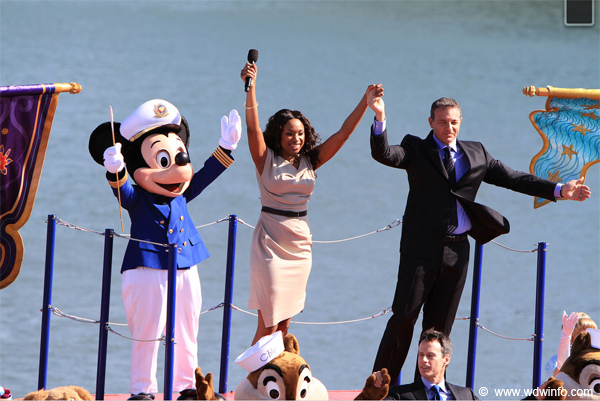 President Bob Iger, Jennifer Hudson and Captain Mickey at the Christening of the Disney Dream

WDC described the compensation terms of the 2011 Agreement as providing Mr. Iger with paid a base salary at an annual rate of no less than $2.5 million, which is an increase of $500,000 per year from the prior Agreement.  While the prior Agreement provided for an annual incentive bonus target of not less than $10 million for each year, the 2011 Agreement increases the annual incentive bonus target to $12 million for each of fiscal years 2012 through 2015, and set at $6 million for fiscal year 2016 (when Mr. Iger is expected to serve solely as the executive Chairman).

Should Iger be terminated without cause, however, he will receive a “lump sum cash payment equal to the base salary that would have been payable had he remained employed through the end of the agreement’s term, and a pro-rated annual incentive payment for the services he rendered through the date of his termination.” Iger receives certain stock option rights should he remain employed by WDC through the end of the 2011 Agreement.