2011 Disneyland Half Marathon – “Fat Drew” Wouldn’t Do This!

Labor Day Weekend meant it was time for the 6th annual Disneyland Half Marathon.  This year, 15,000 competitors lined up to complete the 13.1 mile course, and that didn’t “Sound Dangerous” at all to actor Drew Carey – who was among the sold out field.  Runners and walkers from 49 states (where’s South Dakota? Represent!) and 23 countries wound their way through 2 theme parks and the streets of Anaheim.  Continue after the break for more details as well as Disney’s video highlights of this year’s race. 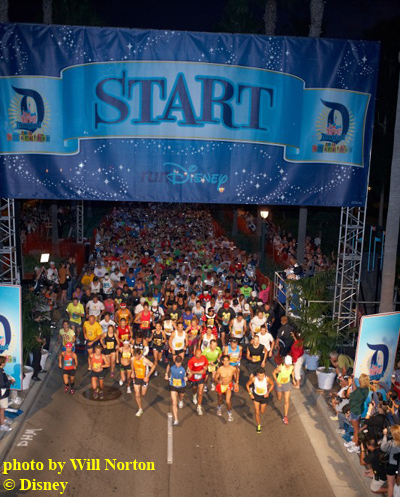 The race started promptly at 6:00 am.  Drew Carey remarked via twitter, “up at 4am to get ready for the Disneyland 1/2 Marathon at 6am.  On a Sunday!  Fat Drew wouldn’t do this.”  He was at the starting line entertaining the crowd as part of the starting line festivities. 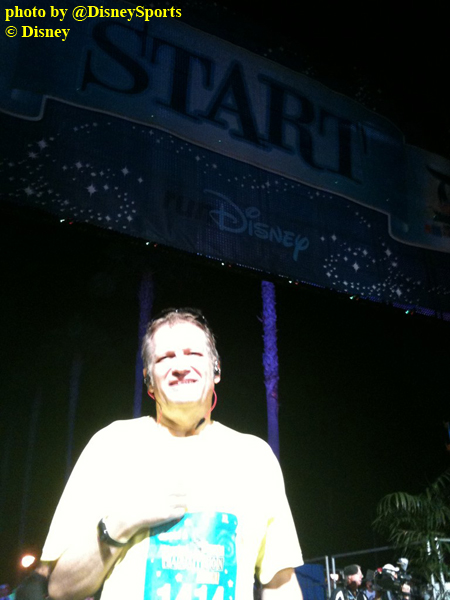 Image: Drew Carey at the start of the Disneyland Half Marathon

Once the national anthem was sung and the fireworks blew, the field was off – starting on Disneyland Dr. near Downtown Disney and the Disneyland Hotel, looping around the theme parks, past the Anaheim Convention Center, and into a backstage entrance for Disney California Adventure (DCA). 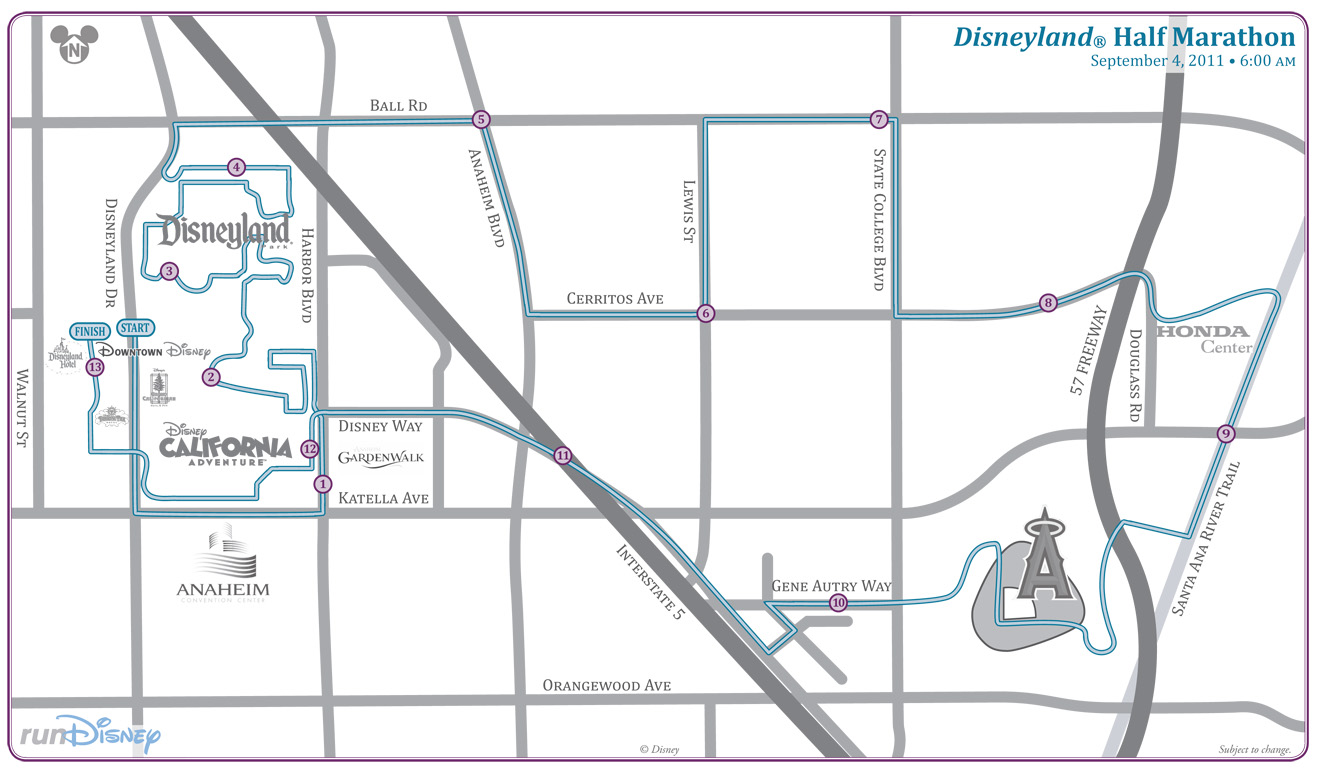 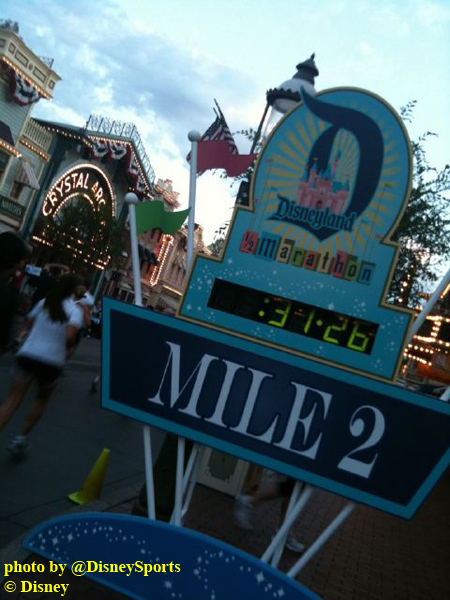 Arguably, the best part of any runDisney event is racing through the theme parks, and the first mile brought the field alongside the California Screamin’ roller coaster.  The course exited DCA, and passed through the esplanade into Disneyland.  Competitors traveled behind Space Mountain, past the Matterhorn bobsleds, and right through the center of the iconic Sleeping Beauty Castle.  From there the course enters Frontierland, goes past Pirates of the Caribbean, around the Rivers of America to Critter Country, and exits the parks to the streets of Anaheim.  After running around home plate at Angels Stadium, the field worked its way back to Disney California Adventure, and entered the park near the Tower of Terror.  After completing 13.1 miles, all finishers received a newly redesigned medal that featured Sleeping Beauty Castle nestled in the Disneyland “D.” 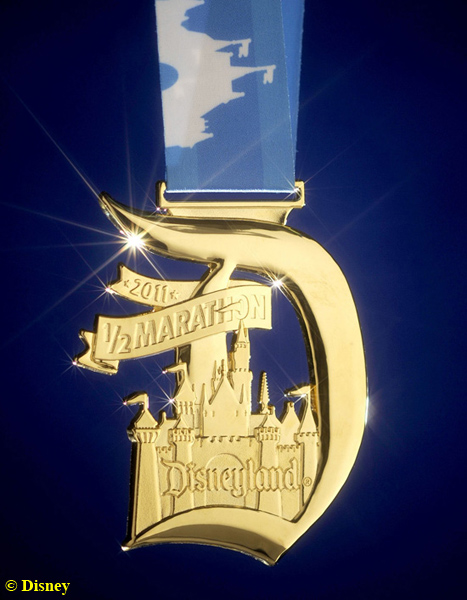 First across the finish line was wheelchair competitor Marc Aten of Moorpark, CA, who crossed the Disneyland Half Marathon finish line with a winning time of 1:02:21 for the wheelchair division on Sept. 4, 2011. 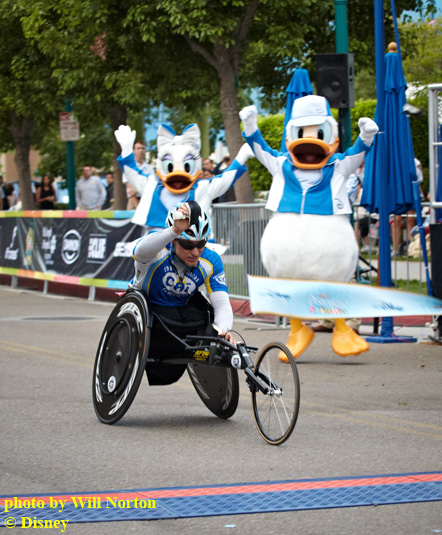 The men’s division was won by Humberto Rojas (27) of Fountain Valley, CA in 1:08:14 or 5:12/mile over the 13.1 mile course.  Upon finishing the race Rojas commented, “it’s like being a little kid when you run in there (Disneyland).  I live a couple miles away and I was like, ‘how cool would it be to run inside Disneyland.’ It’s like a dream come true.” 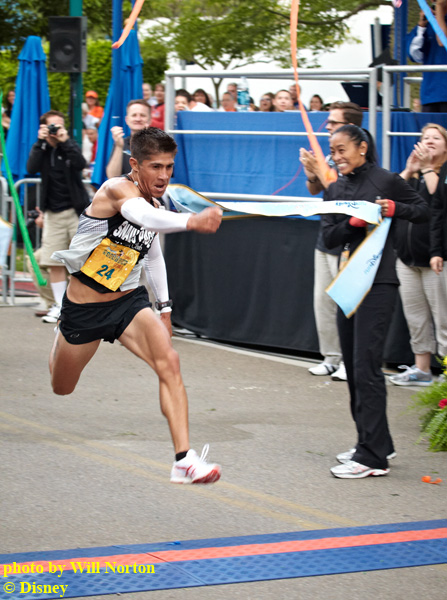 A mere 10 minutes behind the top men’s finisher, Rachel Booth (30) of Mandeville, LA was the first woman (and 9th overall) across the line in 1:18:01 or 5:57/mile pace.  She successfully defended her 2010 victory, and is training for a spot on the US Olympic Marathon team.  Regarding her finish Booth said, “after last year I had to come back and see what I can do. There is nothing better than running through the theme parks, Castle and all the other fun things.” 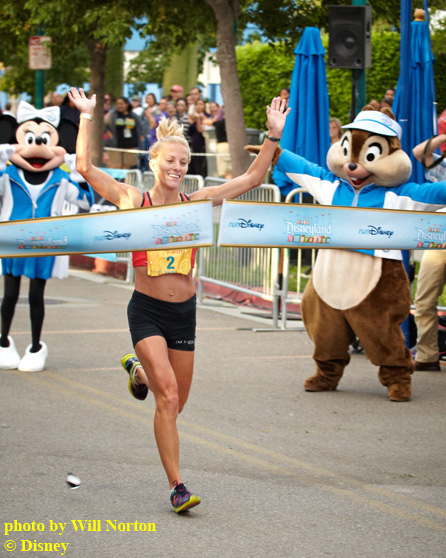 Drew Carey finished the race with a personal best in 1:50:46 (8:26 min per mile), and has clearly dispatched the “Fat Drew” moniker.  After the race Drew Carey tweeted, “loving my day at Disneyland with the family after all that pre-dawn running.”

Next up on the runDisney calendar, the Wine and Dine Half Marathon, October 1, in Walt Disney World during the opening weekend of the Epcot International Food and Wine Festival (and also the 40th anniversary of the opening of the Magic Kingdom).  The next runDisney event held in Disneyland will be the Inaugural Tinker Bell Half Marathon on Sunday, January 29, 2012.  This race will feature DIS Unplugged Disneyland Correspondent Tony Spittell running in a Tinker Bell inspired tutu and fairy wings if he can raise $2,000 for Give Kids The World.

Were you part of this year’s record field of 15,000 competing in the Disneyland Half Marathon?  Please leave a comment below and share your thoughts.