Trying to describe today’s adventure is going to be difficult without sounding like I hit my head and have suddenly turned into some kind of tree hugging hippie. But today is a day I’ll remember the rest of my life – no matter where I go or what I do, I will always remember this experience. 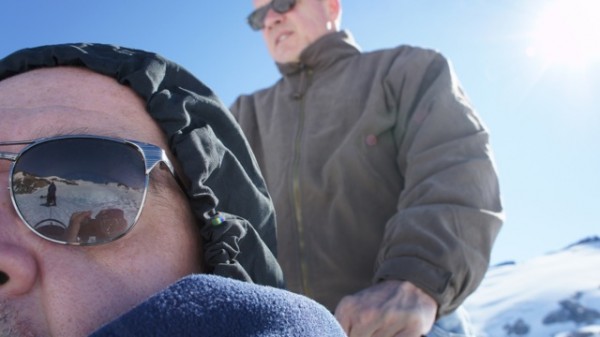 As I opened my eyes this morning, I was overcome with a sense of dread.  Remember that promise I made to myself?  The one about stepping outside my comfort zone and trying new things?  Well, this was the day where I had to put up or shut up.  I hate those days.  The itinerary for the morning involved getting onto a helicopter, flying over mountains, landing on a glacier and riding a dog sled.  There is not a single aspect of that sentence that holds even the slightest appeal to me.  I have a god awful fear of heights, so the thought of getting on a helicopter, let alone taking it over mountains and rivers and glaciers was not high on my list of ‘fun fat guy things to do’.   Second, having grown up in New Jersey,  I despise the cold, and the snow – so the whole ‘glacier’ thing wasn’t giving me any kind of warm fuzzy. The dog sledding – well, to my naive way of thinking this was just animal exploitation on ice.  So, needless to say, this day was condemned to be miserable before I even got out of bed.

Since I knew I would likely spend the morning screaming like a 8 year old schoolgirl, I wanted to avoid any further potential embarrassment – so I skipped breakfast.  I had visions of hurling down the back of the helicopter pilot forcing her to crash land on a glacier.  Donner – party of 6.  (look it up).

The bus ride from the ship to the helicopter was like a slow march towards death for me. My stomach was spinning, my nerves on edge and up until we actually suited up and jumped into the helicopter, I was telling Walter “I’m not doing this”.   As I’m saying this, I’m putting on a life vest and snow boots.  The blue life vests that everyone else was wearing didn’t fit me, so I had to wear the bright orange livestock life vest.  I’m guessing the bright orange color was meant to let rescuers know that this wasn’t a confused whale in the water, just a fat tourist.

We were then introduced to our pilot – a sweet girl of about 9 –  and I proceeded to ask her if she was in a good mood, and if she’d served in Nam – I was nervous enough and didn’t need any VK flashbacks on the way to the dog sledding.  She laughed and said “oh, you’re the nervous one”.  I then informed her that I’d skipped breakfast and in doing so had spared her from having to eat my dead body later on.   The nervous smile on her face told me that she was pretty convinced I was legally insane. 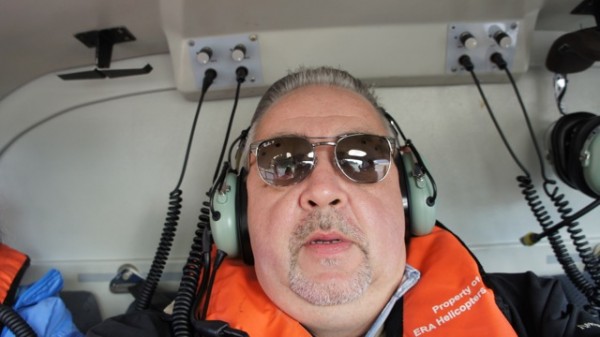 We all donned our headphones (which along with the life vest made me look like a bright orange tick with sunglasses), got a safety lecture which included instructions NOT to open the door during flight.   This was mentioned to us twice, so I’m guessing there have been more than a few ‘jumpers’ on this trip. Then we lifted off and it was finally too late to back out. Our flight path took us over the mountains and above the clouds (which are pretty low to begin with) and provided us with some of the most breathtaking views I’ve ever seen. That’s when I was looking and not crapping my pants. To be honest, the first 5 minutes or so my eyes were shut. Then I thought to myself that if this thing goes down, it’s going down whether I’m looking or not, so I might as well see something pretty before we slam into the side of a mountain. When I eventually opened my eyes, my first reaction was a very real sense of terror.  But then something odd happened.  As I started looking at the view in front of me, I was so caught up in the sheer beauty of it to remember that I was scared.   Even these pictures, which came out great, cannot do this justice. This is something you have to see for yourself in order to really capture the beauty and majesty of it. If you’re like me and have a terrifying fear of heights and flying around mountains in glass jars, its really worth working through the fear in order to experience this. 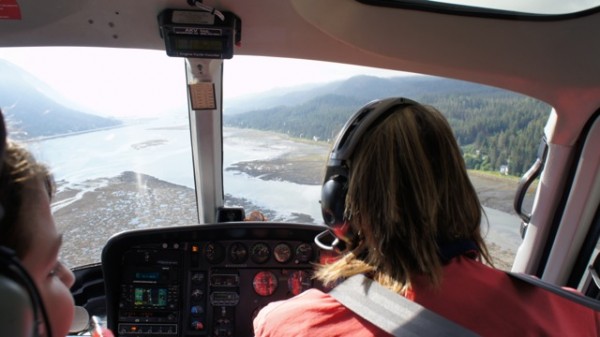 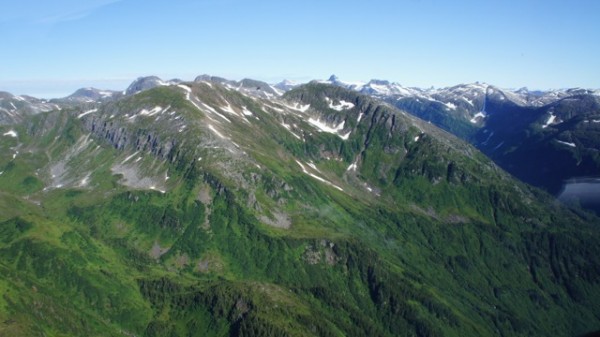 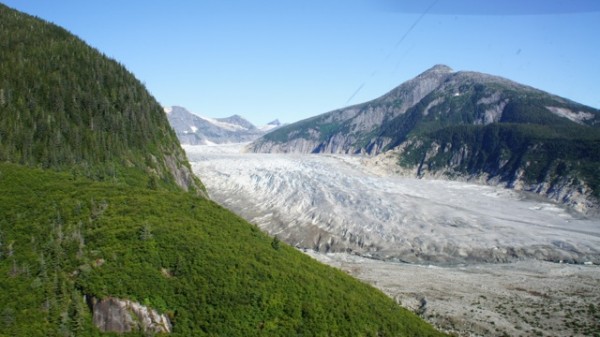 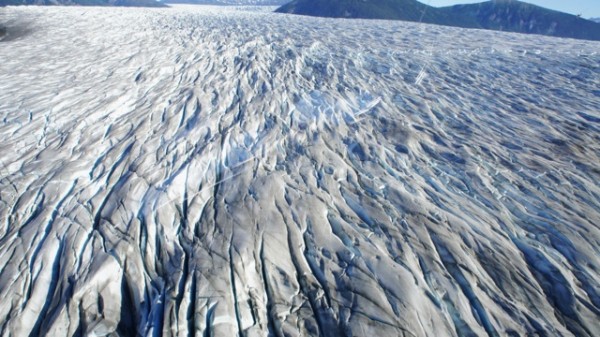 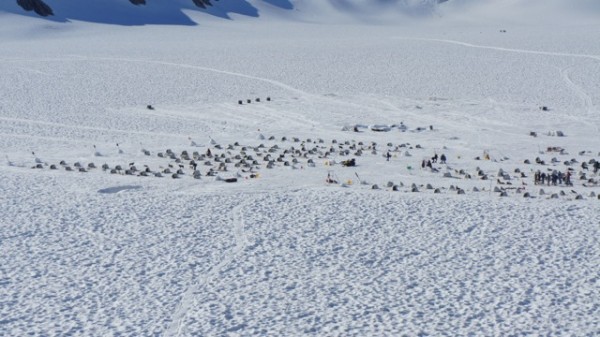 We landed on the glacier right beside what they refer to as “Doggie World”. There are a few makeshift buildings, several small ‘doggie igloos’ and that’s it. I was certain there would be an underwear store or something where you could purchase clean unmentionables, or at least a laundry mat to wash the skid marks out of the ones you were wearing, but no. 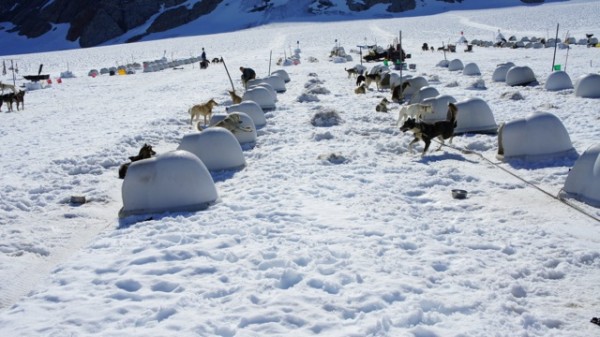 It wasn’t long before we were talking with one of the dog trainers who would be taking us on our dog sled expedition.  She explained to us that all these dogs are Alaskan Husky’s and that they are bred for this kind of work.  She told us that they loved the cold weather – in fact, the colder the better.  Since it was a relatively warm day however, we would have to stop a few times during our trek to let the dogs rest.  They’re used to doing this type of thing during the Iditerod when temps are routinely about 10 below zero.  To prevent the dogs from overheating, they would need to rest and roll around in the snow.   You may notice that the dogs are wearing little ‘booties’.  Since the temps are warmer during the day at this time of year, then drop to freezing overnight, the snow turns into ice and can be very rough on the dogs.  So, to protect them they put the little booties on. 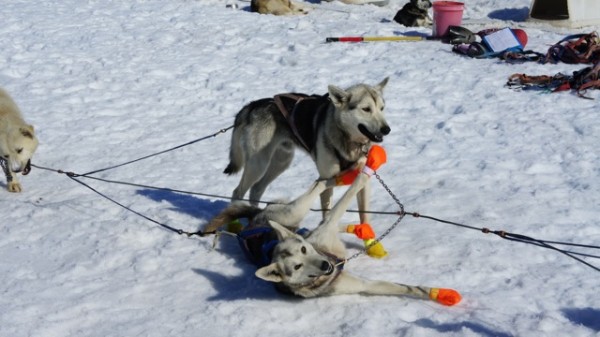 The experience, to say the least, was exhilarating. And as far as these dogs being exploited – well, if they are, they are incredibly well cared for by trainers who genuinely love them. This was evident from talking to the trainer who was with us on our ride. These were all her dogs – all 15 of them. She had raised them at her home in northern Alaska since they were born. She knew every one of their personalities as though she were discussing her siblings.

The ride back on the helicopter from the glacier was much easier for me. I was far less nervous (still nervous, but not ‘crap my pants’ nervous) and was really able to enjoy the view this time.

Once on the ground, the Adventures By Disney tour was going to continue, but Walter and I decided to spend the afternoon in Juneau and just walk around and do some shopping. While Juneau is a lovely town, the shopping is pretty much the same as you would get in virtually any cruise port. Still, it was nice to walk around, do a little shopping, get back on the ship and take a nap.