Mom! Phineas and Ferb have a Show at California Adventure!

You know, the way Disney California Adventure looks right now, it reminds me of the time that Dr. Doofenschmirtz invented the Wall-Inator to put walls up all around the entire Tri-State Area!    Alas, Dr. D has had nothing to do with all of that construction right now, but he would be reveling in the fact that the Pixar Play Parade is on hiatus, touring difficulty is up, and guest morale isn’t quite as high as it should be.

But, wait!  Phineas and Ferb know what they’re going to do today, to help make up for the lack of enthusiasm that the construction walls are bringing!  They invent the A-Little-Too-Young-To-Drive-Inator and are throwing a Rockin’ Rollin’ DANCE PARTY!!!!

One thing California Adventure has always been known for is its interactive entertainment.   There are wandering performances of all kinds to keep folks engaged and entertained in between rides and meals.  Examples of this range from the three High School Musical productions, with their traveling stage, and the Green Army Men in the jeep that took them around Paradise Pier, as well as the current Pixar Pals shows in the Hollywood Backlot area of the park.

The new Phineas and Ferb’s Rockin’ Rollin’ Dance Party aims to take this to a new level.  Since this show grasps the hearts of such a wide age range – from easily distracted small children to thoroughly engaged parents, Disney is aiming at a more thorough audience than the High School Musical shows ever did.  You could tell by the excitement of the crowds as they drove around Paradise Pier and to the show’s performance area in front of Ariel’s Undersea Adventure.  Heads all turned and kids dining at the new Paradise Garden Grill and Boardwalk Pizza and Pasta area were immediately drawn out of their seats as they heard those familiar tunes pass by.  My girls and I were no exception to that either! 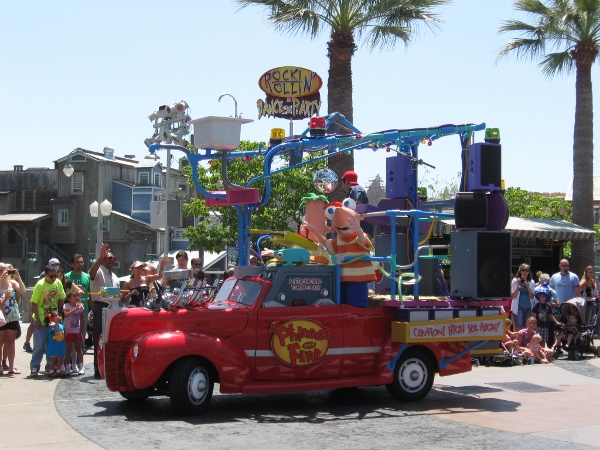 Leading the boys into the performance area are a pair of trustworthy associates from Isabella’s Fireside Girls troop.  The Fireside Girls are always by the boys’ side to help with any of the exciting projects of the day, be it building a fun house, repairing a time machine (according to their manual), or even flying a VW van through the air off a roller coaster in an abandoned amusement park.  Their guts, poise, and determination ensures that every job will be accomplished and this show is no exception.  In fact, I’m sure each one of these Fireside Girls has completely earned their “Teach Complete Strangers How To Dance” badges! 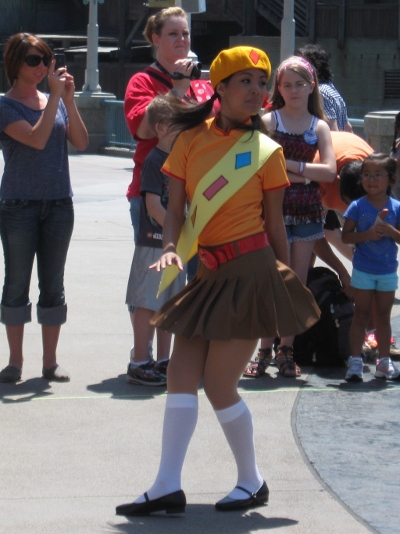 Coming along to help Phineas and Ferb out is a colorful host and DJ, who we found to be pretty entertaining.  He does his best to assist the Fireside Girls in teaching the dance moves, while introducing and spinning the tunes.  In this case, he was certainly getting his Gitchy Gitchy Goo on!  “Bow Chicka Bow Bow – that’s what my baby says!” 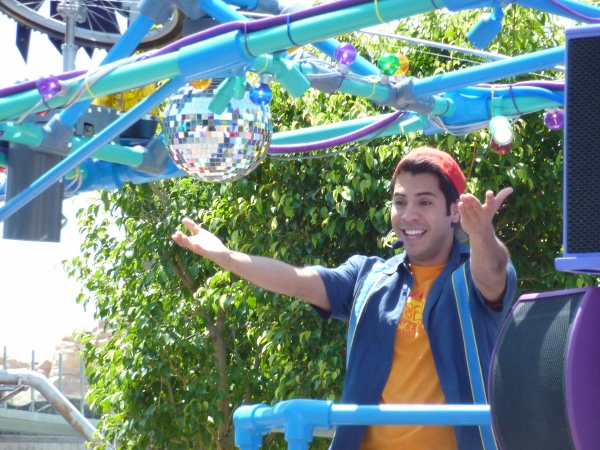 Perry is even on hand to keep an eye on the festivities.  Just because Dr. Doofenschmirtz is nowhere to be seen, doesn’t mean that Perry might not be needed.  I know some of you are disappointed that Perry isn’t up and dancing with the kids, but I ask you – does he ever do that on the television series? See what I mean.  So, I am assuming that would be your answer as to why this doesn’t happen in the show. 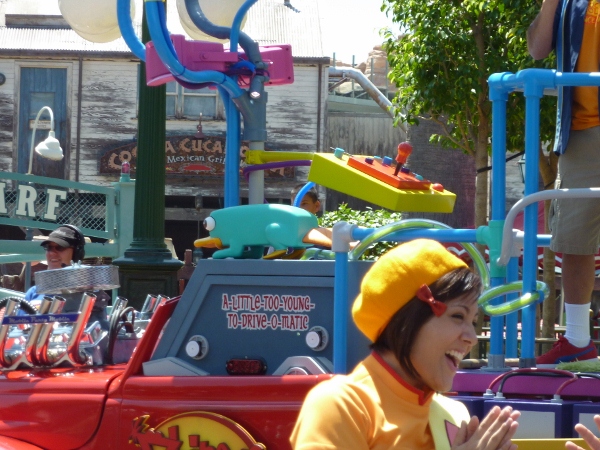 The details of having Perry as part of the moving performance vehicle is just one example of the great attention to detail the show has.  The Dance Party relies on the show’s extensive range of songs (which are written to showcase almost every possible music genre) and the corresponding easily-animated dance moves to teach the joy of dancing and movement to the audience.
In fact, the primary job of the Fireside Girls is to teach the audience how to do the dances that accompany each song. Depending on the size  and enthusiasm of the crowd, some guests may find themselves getting a personalized lesson! During our show, there seemed to be a lack of outgoing volunteers, so there were some pretty lucky kids. 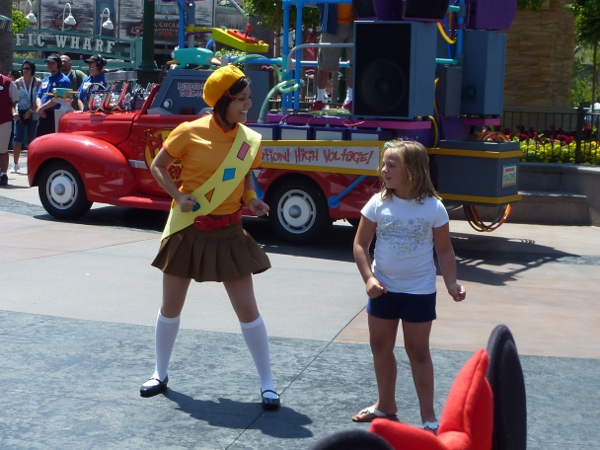 One thing to be prepared for is that with the way the choreography runs, Phineas and Ferb don’t have much time to really dance one-on-one with the kids.  It seemed like it was even a bit difficult for them to mix the steps and simultaneously interact when they did have the opportunity too.  I blame it on their animation style. It’s possible that this will improve or modify as the show goes on, but you should probably be prepared for the fact that these characters have a different interaction pattern that the older and more traditional characters, such as the princesses and Mickey, do.  You can kind of see that from these photos of the ever-popular Phineas and Ferbots routine. 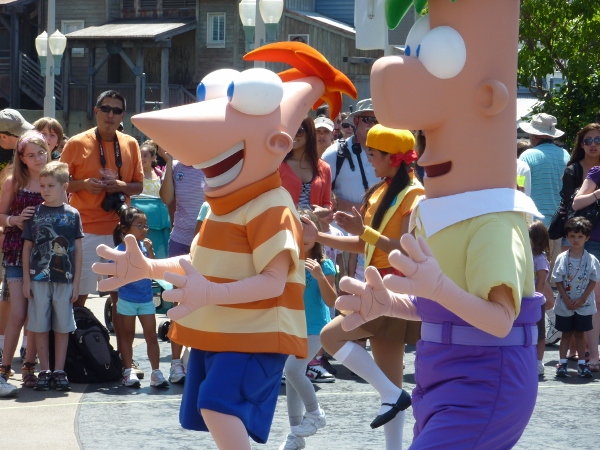 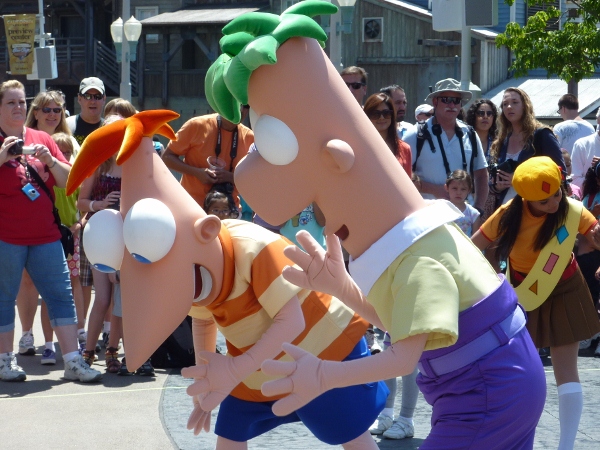 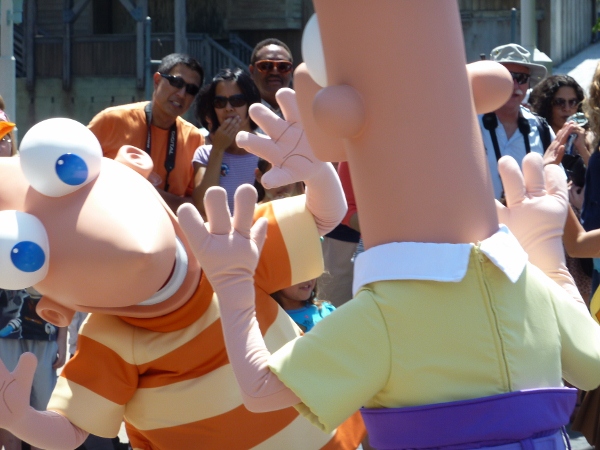 Of course several of your favorite songs are part of the show, and I’ll leave most of them as a surprise.  However, you can’t have a “greatest hits”party without Candace’s classic S.I.M.P. (Squirrels in  My Pants for those of the uninitiated crowd) and you can’t perform S.I.M.P without the most critical element of the song and dance – the squirrels!
Phineas and Ferb made sure they brought a few along, that “pop up” at just the right time! 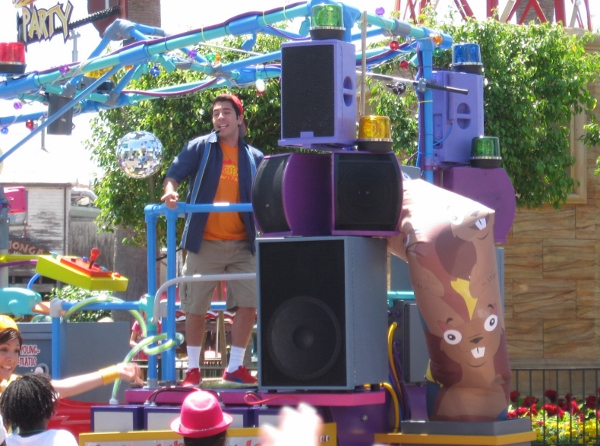 And can I just say that in taking Candace’s place on the dance floor, Ferb can completely bust a move on this number…. 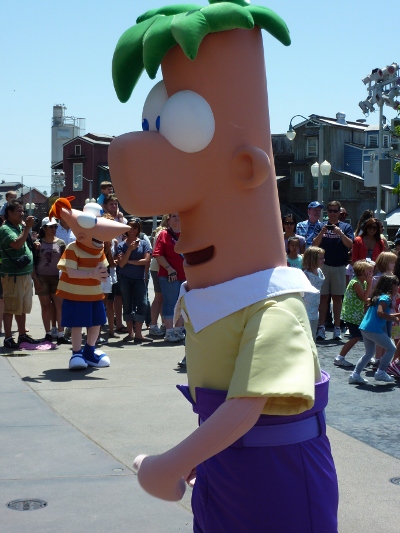 I think one of the things that worked really well in this show was how they took advantage of the diversity of musical stylings that the show uses.  This made for a really nice mix of dance numbers and gave everyone something that they could enjoy participating in.  Even parents got involved in some of the numbers – this mom could really hula-hoop! 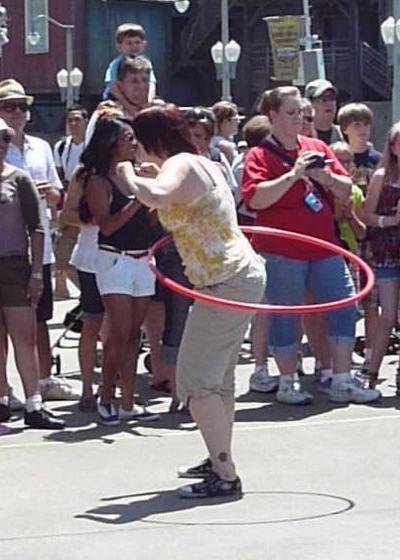 Of course, it seems like Disney interactive event or show can ever occur without certain formulaic elements….. enter the LIMBO…   It makes the Backyard Beach number extremely popular with the kiddos!  This was possibly the song that drew the most kids from the audience! 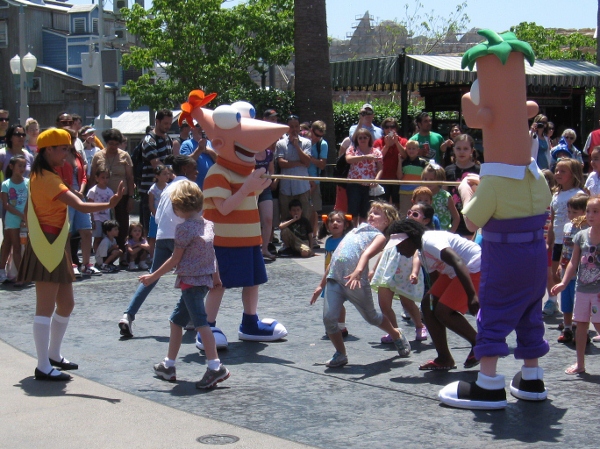 At the end of the dance party, Phineas and Ferb gather everyone together for a group photo.  Since there is currently no official Phineas and Ferb meet and greet, this is really the only chance to be photographed with them.  They do call out a warning to parents to “Get your cameras ready for a photo with all of our new friends!” 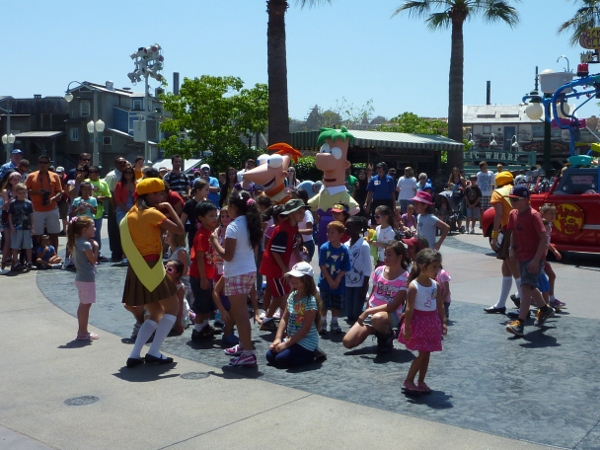 Of course, all good things must come to an end.  With the ringing tones of Candace’s “busting” cry, Phineas and Ferb head the A-Little-Too-Young-To-Drive-Inator off down the Pier, secure in the knowledge that they did exactly what they set out to do today! 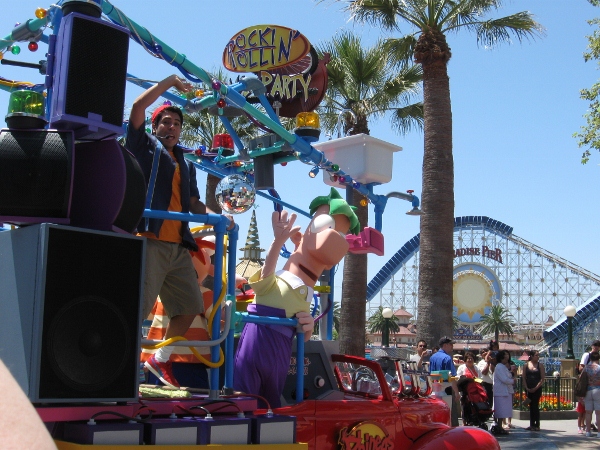