Mother’s Day rolls around every 2nd weekend in May.  Since we would be at Walt Disney World the following weekend, we decided to give Mom a special treat this year – a spa day for her Mother’s Day present.  We were staying at the Walt Disney World Swan; so I called up the Mandara Spa located in their sister hotel, the Dolphin.  After talking with the agent, I reserved facial and massage treatments for my wife.  The woman on the phone said, “Your wife’s a very lucky woman.”  Continue after the break to learn just how lucky she was. 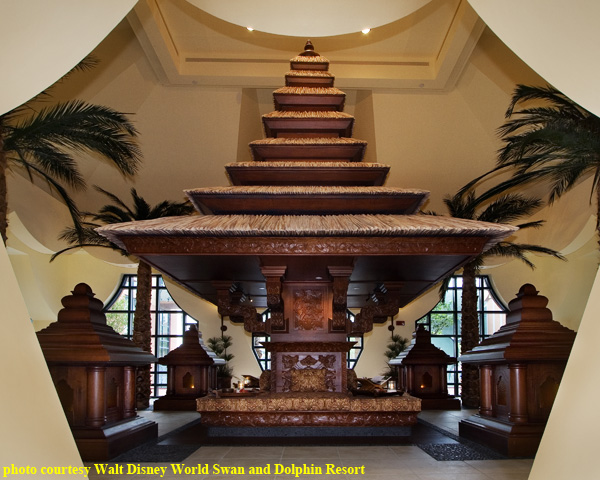 The Mandara Spa is an Asian-inspired retreat using carved woods, art, and architecture to immerse guests in the look and feel of the Indonesian island of Bali.  The spa transports its clients to a place far away from Walt Disney World.  Within the spa are both tea and meditation gardens overlooking the causeway between the Swan and Dolphin hotels and Crescent Lake.  The tea garden contains a hand-carved replica of a traditional Balinese bale (pictured above), a thatched-roof open pavilion used for relaxation.  The meditation garden features a 25-ft Meru sculpture centerpiece (similar to a pagoda), surrounded by stone lanterns and thematic rock gardens. The meditation garden at the Mandara spa is the only spa in the country to feature an authentic Meru temple. 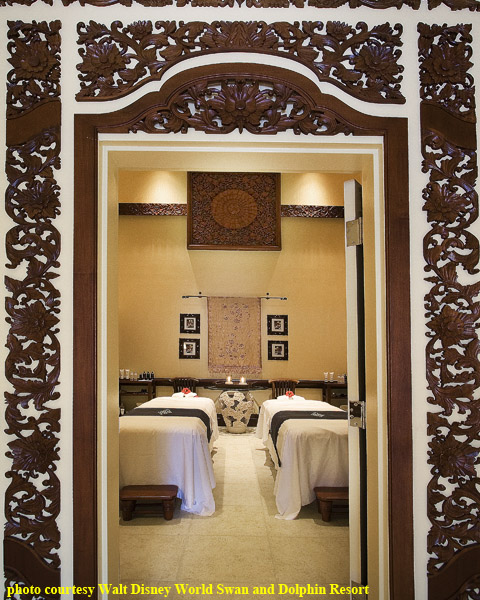 Upon checking in, my wife was escorted to a private changing area, stripped down to underwear, and draped herself with the robe provided.  She slipped into the spa’s complimentary sandals (hard plastic and a little uncomfortable – she recommends bringing your own), and entered the serene meditation garden.  The room was calm and relaxing.  However, the carved wooden chairs, while pleasing to the eye, were a little uncomfortable for sitting, but soon she was ushered in for her treatment. 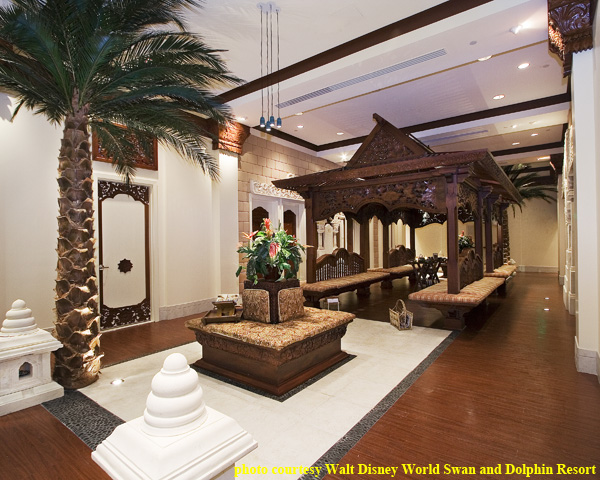 First she was booked for the spa’s signature Balinese massage.  She was led into a private massage room, the therapist left while she disrobed, and lay face down on the table.  The treatment’s description says it “incorporates stretching, relaxing movements, and elements of shiatsu.”  My wife said, “Yeah, sure… all I know is it felt very, very good.”  The long strokes used for the Balinese massage were particularly relaxing. 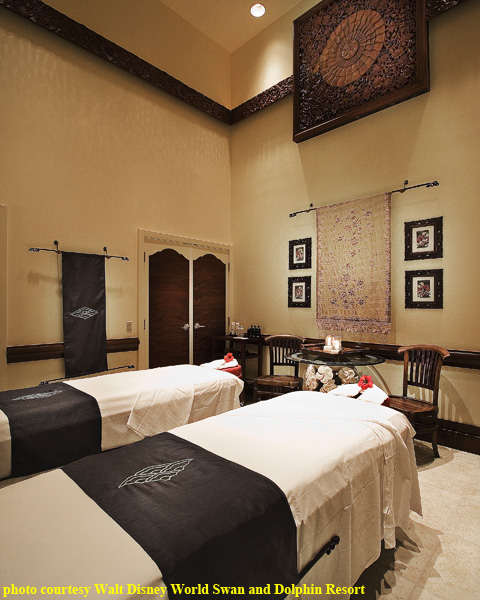 The therapist is responsive to your needs.  My wife remarked her legs were bruised from the previous day’s ride on Big Thunder Mountain.  No problem, during the massage the therapist made sure not to press too hard on those sensitive areas.  My wife relaxed deeply, almost fell asleep during the procedure, and said the 50 minutes passed much too quickly. 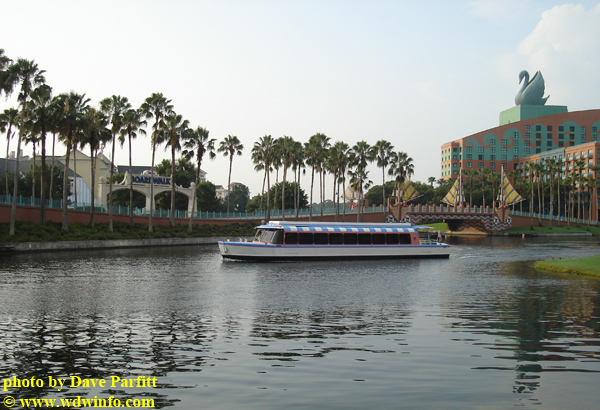 Following the massage, she was led into the meditation room, overlooking the fountains and breezeway outside.  There were other people in the room, but plenty of personal space for everyone to sit and relax without being on top of one another.  My wife said she was in such a state of relaxation, her sense of time was altered, and everything slowed to an easy pace.  She waited maybe 5 min or so for the next treatment while sipping on tea and water. 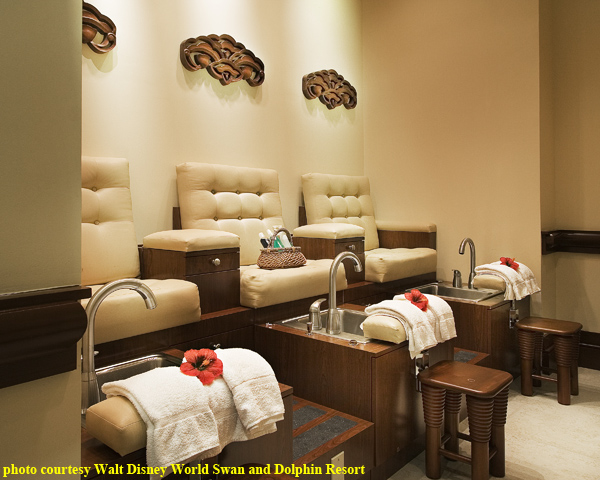 Next up was the Elemis skin specific facial.  The therapist entered, asked about skin type, and starting cleansing and putting on product.  My wife described this treatment more “clinical” rather than relaxing, and felt as though she was in a medical office.  A piece of advice, be clear what type of experience you are looking for – my wife had never received a facial before, and was looking for more relaxing experience.  She had prepared herself for a head, neck, and face massage, and was not expecting the pain involved with the extraction of blackheads, etc.  If you want to walk out of your spa day feeling like a bowl of jello, have the massage come last.

There was no high-pressure sales pitch to buy products from the Mandara Spa.  My wife did end up purchasing a product.  However when she remembered the bottle contained too much liquid to take on the plane, they were more than happy to exchange it for a smaller size and refund the difference. 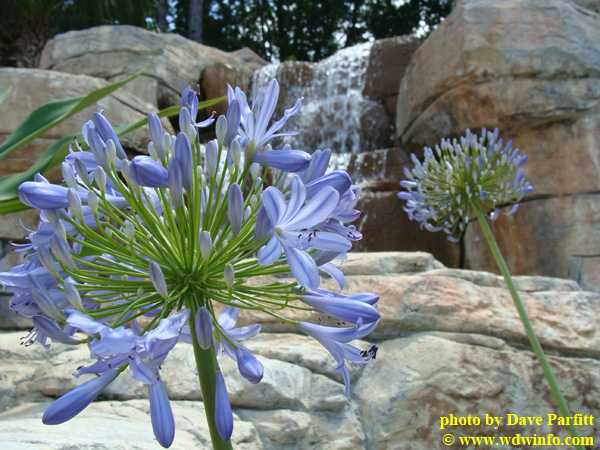 All and all, this year’s Mother’s Day present was a big hit.  While she may not have been so thrilled with the facial, she loved the massage and said next time we could book her a longer one (hint, hint…).  Plus, while my wife was kneaded into a bowl of jello, the girls and I whiled away the afternoon splashing under the waterfalls of the Swan/Dolphin Grotto Pool.  It was a relaxing day for us all, and a great way to give Mom the pampering she deserved.