SeaWorld Has Passion For Turtles With New Film And Reef Opening

Taking a page out of Disneynature’s book, SeaWorld launched a new initiative called SeaWorld Pictures.  The first film released by the division is “Turtle: The Incredible Journey”, which premiered in 3D on Tuesday, June 21 at SeaWorld San Diego.  The film’s premiere also corresponded with the grand opening of the new Turtle Reef exhibit also at SeaWorld San Diego thus kicking off the “year of the turtle.”

Update July 25, 2011: This film will be available for home viewing via DVD and Blu-ray on November 15, 2011.  The suggested retail price for the DVD will be $14.95, and could be available for less than $10 with discounts and promotions.

Continue after the break to watch the trailer for the film, and read and listen to my interview with Nick Stringer, Director of “Turtle: The Incredible Journey.” 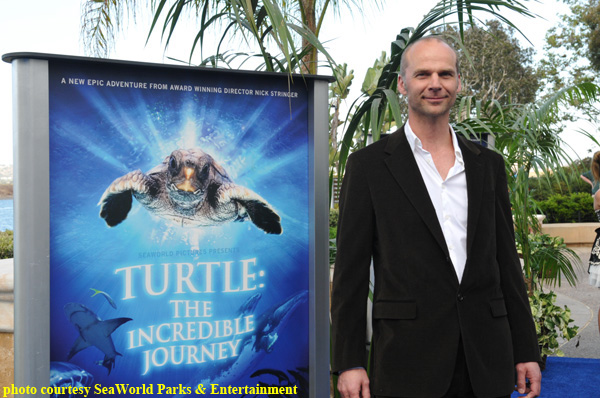 1. Click here
to listen to the interview with Director Nick Stringer.

Nick Stringer is one of the leading independent filmmakers for wildlife documentaries.  He’s worked over 17 years creating films for National Geographic, Animal Planet, PBS, and the BBC.  His films have been featured for many years on National Geographic Explorer, where he won an Emmy Award for an episode titled “Body Snatchers.” 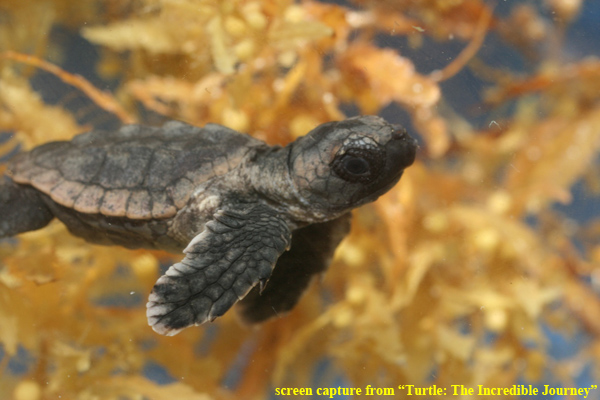 “Turtle: The Incredible Journey” follows the story of a little loggerhead turtle from the time of hatching from its egg, to emerging onto the beaches, and beginning its 9,000 mile trek.  The journey begins the day it’s born, and the 20 year odyssey will eventually circle the entire North Atlantic Ocean – starting and finishing at Florida’s Atlantic beach.  Stringer says the story’s an important one because sea turtles are in decline, and he is committed to educating the public about the threats turtles currently face. 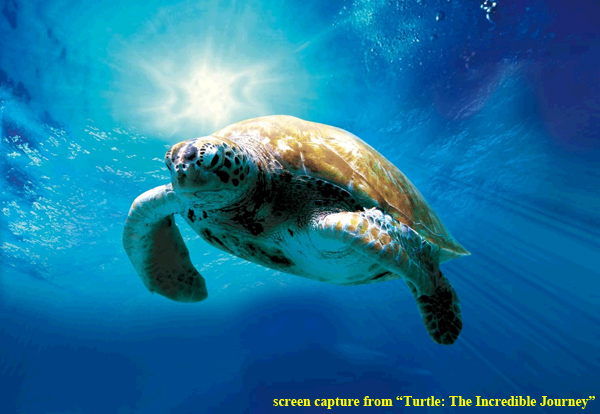 Nick Stringer’s team took 2 years to document the story of the loggerhead turtle’s migration, and one of the biggest film-making challenges was the ocean itself.  “It can throw anything at you from storms, to swarms of jellyfish, to sharks – and actually finding the turtles in the ocean itself – are all huge challenges,” Stringer explained.  Not only was finding the turtles in the ocean difficult, but finding a turtle exhibiting the desired behavior was even harder.  For example, Stringer wanted to document a loggerhead couple mating.  The crew searched for a mating pair, but it wasn’t until the last hours of two long years of filming they finally located and filmed a pair of loggerheads in the act.  Despite those difficulties, Stringer insisted on immersing himself and the audience into the turtle’s world.  He wanted to “be the turtle” he said, and bring the turtle’s reality and vision to life. 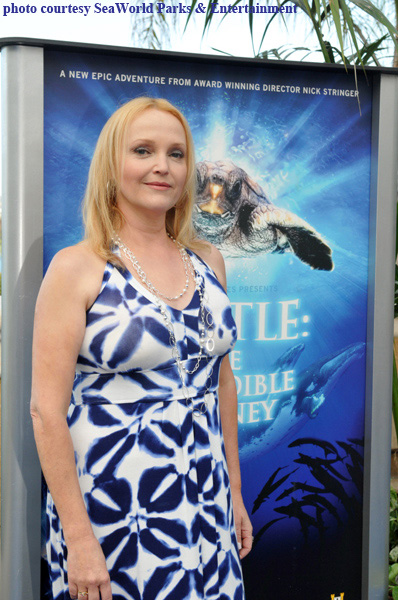 “Turtle: The Incredible Journey” was initially released in 2009, and received many awards from a number of prestigious film festivals.  For a variety of reasons the film had its own incredible journey before SeaWorld Pictures picked up the film to distribute in the US.  Of course, 2009 was also the year “The Cove” was released, which would win the 2010 Academy Award for best feature documentary.  “The Cove” was highly critical of SeaWorld, and I asked Nick if he had any concerns or hesitations when SeaWorld approached him to release “Turtle: The Incredible Journey.”  Stringer replied,

“Of course it’s something you have to think about.  Basically SeaWorld does a lot of work with marine turtles.  They rehabilitate and rescue them, and they probably save more turtles than any other organization.  I was actually delighted that they were interested in the film, and that they loved what the film was trying to do.” 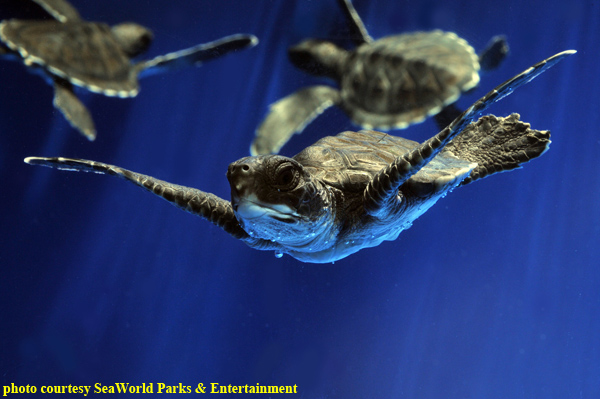 In a separate conversation, I spoke with Scott Helmstedter, Chief Creative Officer for SeaWorld Parks & Entertainment about the new Turtle Reef attraction at SeaWorld San Diego.  The focal point of this new exhibit is a 300,000 gallon aquarium with an underwater viewing gallery featuring over 60 hawksbill and green sea turtles.  In addition to the sea turtles, the aquarium contains thousands of tropical fish, interactive exhibits, and a new ride called Riptide Rescue. 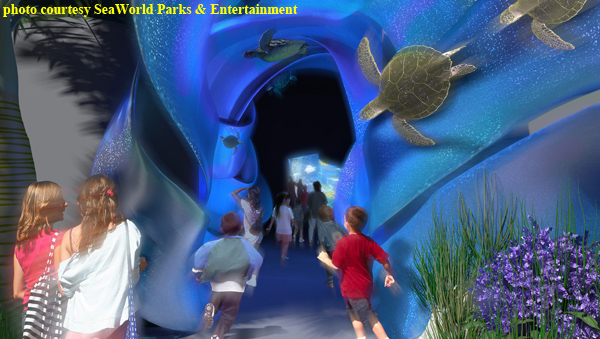 SeaWorld has demonstrated a commitment to endangered and threatened sea turtles throughout its 40 years, and have rescued over 1,500 injured or sick sea turtles.  Those sea turtles that cannot be released back into the wild have a permanent home at the park.  SeaWorld has also donated $400,000 to sea turtle conservation programs through the SeaWorld and Busch Gardens Conservation Fund.  In the Turtle Reef exhibit, guests will see first-hand the impact of SeaWorld’s conservation effort by tracking rescued, tagged, and released sea turtles on an interactive touch screen map called Turtlelink.

A large part of the conservation message in Turtle Reef centers on the dangers of marine pollution on sea turtles.  For example, plastic garbage bags are often mistaken by sea turtles for one of their favorite foods – jellyfish.  To raise awareness of this issue, SeaWorld San Diego is eliminating the use of plastic bags in the park.  Scott Helmstedter explained, “SeaWorld Pictures is just one of the ways the company is expanding, creating new experiences, and sharing the SeaWorld mission.” 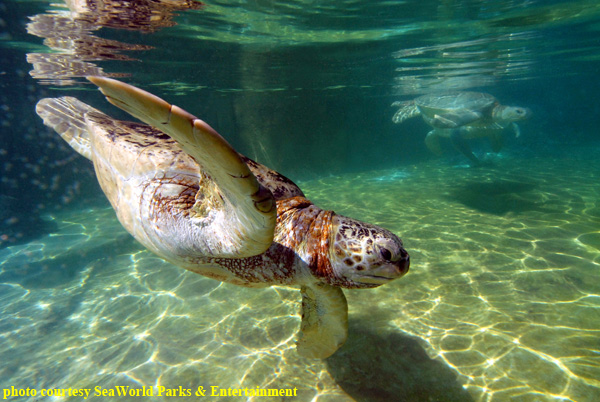 For its inaugural film, SeaWorld wanted to focus on an animal they are particularly passionate about.  The message of “Turtle: the Incredible Journey” encapsulates SeaWorld’s mission in terms of conservation, protection, rehabilitation, and rescue.  The film gives people a way to learn more about the turtle, and the exhibit allows them to go to SeaWorld San Diego and see the turtles up close.

I want to thank both Nick Stringer, Director for SeaWorld Pictures’ “Turtle: The Incredible Journey”, and Scott Helmstedter, Chief Creative Officer for SeaWorld Parks & Entertainment, for taking the time to chat with me.  “Turtle: The Incredible Journey” is open now in New York, Los Angeles and in theaters near the 3 SeaWorld locations: Orlando, San Diego, and San Antonio.  The film opens nationwide throughout July and August.  SeaWorld San Diego’s new Turtle Reef attraction is now open to the public.