I’ve said it before, many times “less is more” when it comes to a Disney vacation.  At Walt Disney World, it’s important to slow down, relax, and soak in the details – instead of always rushing from attraction to attraction.  The same holds true for the Disney Cruise Line.  There are so many opportunities to enjoy simple pleasures with your family that you may not have time for at home.  Continue after the break for one such simple pleasure – Behold, The Mickey 200. 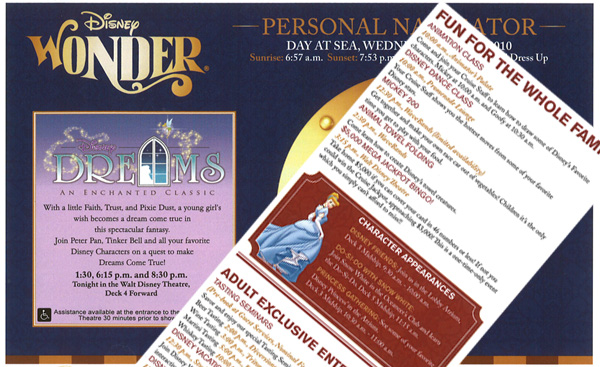 Our family took a 4-night cruise on the Disney Wonder, and each night of the cruise our girls (ages 9 & 12 at the time) would pour over the Personal Navigator left in our stateroom by the attendant.  The Navigator is a daily newsletter that gives cruisers important information for the next day such as shows, activities, restaurant hours, drink of the day, etc.  On this night, one activity caught the girls’ eye – “Mickey 200.”  The listing was simple and said:

Mickey 200: 12:30 pm, WaveBands (limited availability)
Get together and make your own race car out of vegetables!
Children, it’s the only time you get to play with your food.

Now I’m not sure if it was the magic words limited availability… or, the idea of playing with their food… or, just doing something with vegetables besides eating them that made this activity seem extra special.  Whatever it was, the Mickey 200 rocketed to the top of our Must-Do list for the next day. 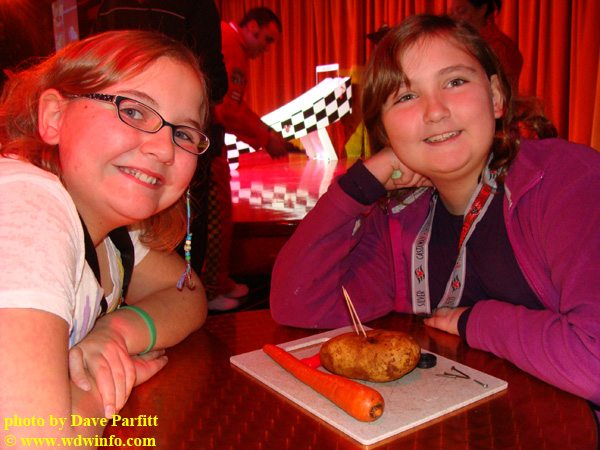 The event was scheduled for 12:30 pm in Wavebands, the dance club in the Route 66 Entertainment District of the ship, and we promptly showed up around noon.  [Hey, what can I say?  It was listed as “limited availability.”  Plus, I was a Boy Scout, and raised to show up early.]  Needless to say we were the first (if not only) ones there.  We received our car components: a potato, a carrot, 2 toothpicks, 4 wheels, and 4 nails – and were handed our tools: a knife and cutting board, and we set to work to create some sort of vehicle. 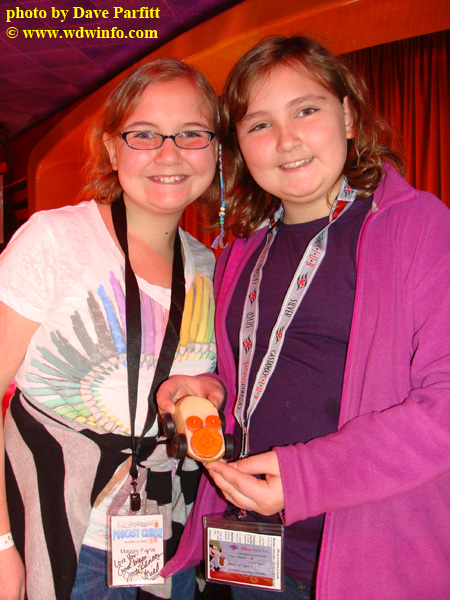 The family huddled together to come up with a plan.  “Let’s shave a little from here!  Let’s use the carrot for a steering wheel!  Make sure the wheels can roll!”  Little by little the car emerged: we used the potato for a chassis, weighed down the front with carrots, and decorated it with a “hidden Mickey.”  Now it was time to see what this tater could do… 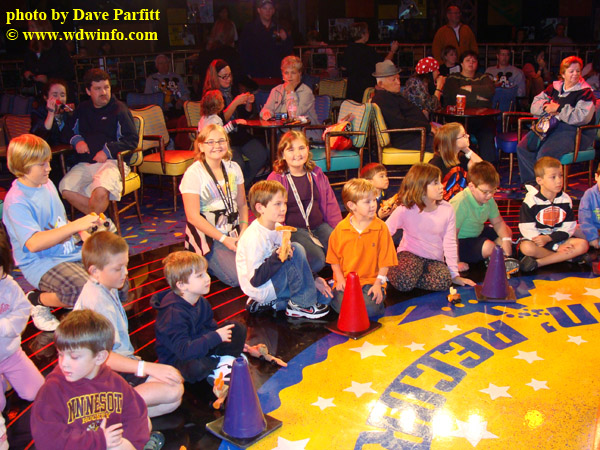 The race track was an elevated hill similar to a Cub Scout Pinewood Derby.  Race cars were randomly selected and pitted against each other at the top of the hill – while the kids eagerly awaited the outcome.  Whoosh… the potatoes rolled down the hill.  Well, some whooshed… others thudded… and still others just got stuck in their lane.  At the bottom of the hill, winning cars were placed on one side and the losing cars set aside on the other. 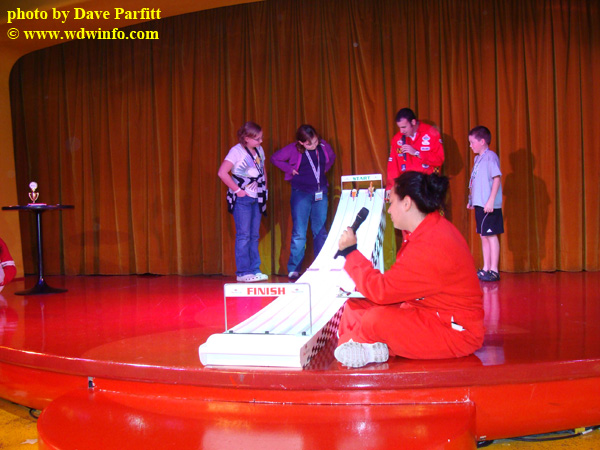 Race after race went by until everyone had competed once, and, lo and behold, our car actually won its race!  Next, winners faced winners until only one car remained victorious.  Heat after heat, the girls’ “hidden Mickey” car kept winning.  It was the last car standing!  Until… the Pen of Destiny came into play.  What?!?  Pen of Destiny?!?  A twist you say?!?  Yes, one previously defeated car was selected by a random spin of a pen to race for the ultimate Mickey 200 championship.  Who would it be? 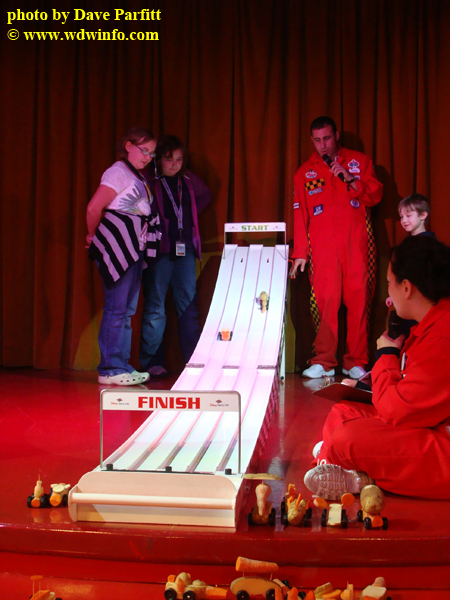 The Pen of Destiny spun and landed on the same car the girls’ easily defeated in Race #1.  Oh, this would be a piece of cake… the coveted plastic trophy would be ours!  But wait, our competitor modified his design since the first race.  He’s corrected the engine… I mean, vegetable… trouble from before.  Maybe this ultimate race for the plastic wouldn’t be as easy as the first time.  What has the Pen of Destiny wrought?!?  The cars took their position at the top of the hill.  The lever released.  The potatoes hurtled down the track, and our… potato… finished… LAST!  The horror, the shame, the uneaten veggies. 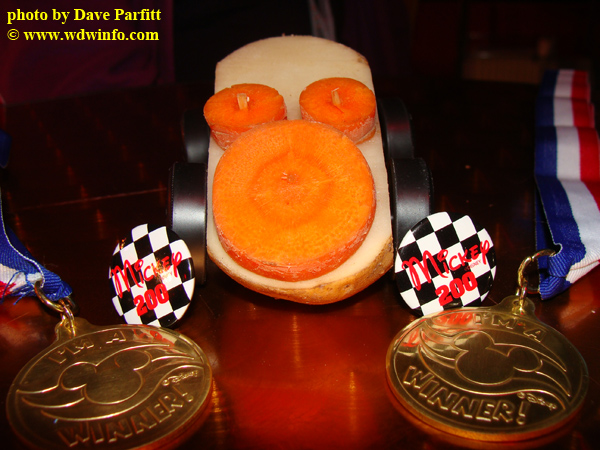 Instead of taking home the plastic trophy, the girls settled for plastic medals instead.  No matter, it was all in good fun, and that’s what I meant about slowing down and taking time to savor what you find.  We didn’t go on a Disney Cruise to compete in the Mickey 200, or take home a plastic trophy (or medal for that matter).  We went on a Disney Cruise to spend time together as a family – to laugh, to cry over lost trophies (OK, there was no crying involved, but it flowed nicely), to just enjoy each others’ company.  You never know what particular experience will form that family memory.  So don’t force it – slow down, savor, and “Let the Memories Begin.”