It never ceases to amaze me the power and generosity of the Disney fan community.  On Sunday, May 22 a breakfast meet was held in Disney’s Hollywood Studios to raise money for Give Kids The World (GKTW) via our Power of 10 campaign.  There were over 120 guests registered for the event, and helped to raise nearly $2,500 for GKTW.  The breakfast was discussed on the

1. May 25th edition of the DIS Unplugged
.  However, please continue after the break for a couple of my own thoughts and perspective on organizing the event. 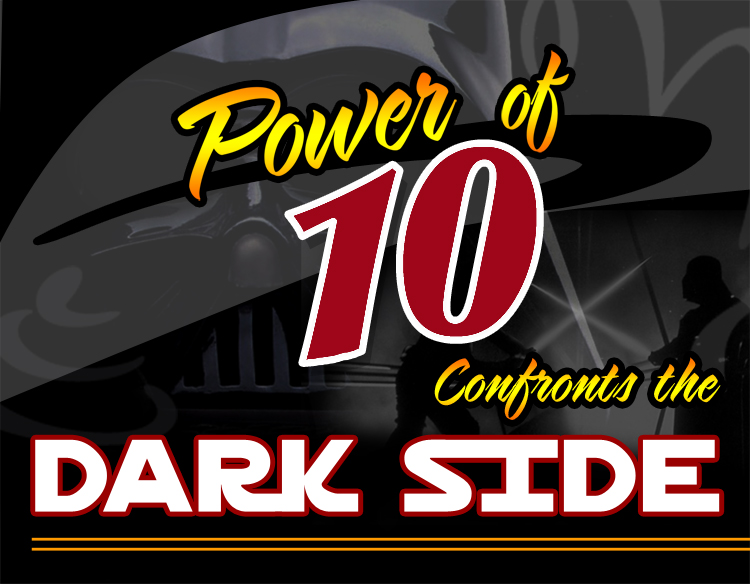 As a hard core Star Wars fan, I couldn’t wait for the opening of of Star Tours: The Adventures Continue.  It occurred to me, “Wouldn’t it be cool to have breakfast, inside Disney’s Hollywood Studios, next to Star Tours, before the park opened?”  That way, once the park opened, we’d be right there and able to ride before the line got too long.  I checked with Disney, and reserved the Backlot Express (next to Star Tours) from 6 until 9 am.  Whoa… to be honest, I wondered if anyone would come at such an early hour let alone pay an additional $50 for our GKTW breakfast. 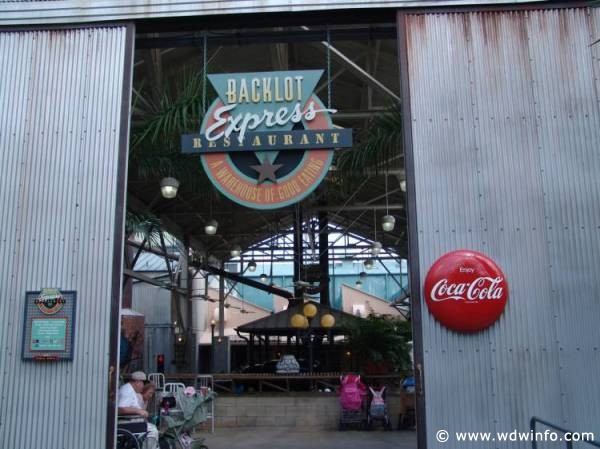 I never should have doubted such a giving and supportive community.  People did not hesitate to sign up, and we had widespread support across the Disney fan community.  There were many different Disney podcasts, over 10 different Disney blogs, and at least 2 different travel agencies represented.  The Star Wars community also pitched in donating signed books and memorabilia for a silent auction held during the event.  Once I knew we would have a group, I turned my attention towards lining up some special guests.

I reached out to Anthony Daniels, the actor who portrayed C-3PO in every Star Wars film, and donned the gold suit once again for the new Star Tours attraction.  Imagine my surprise when I received the following reply:

“I think it is possible, briefly.
One of the projects I have been advising on at the Carnegie Mellon University Entertainment Technology Center, earlier this year, is the Star Tower at GKTW.  So I am happy to reconnect with the whole thing.

I was over-the-top excited.  At one time I owned a “Story of Star Wars” record, narrated by Anthony Daniel’s C-3PO himself, and played it over and over again on the record player in my room.  Now, that person I listened to day after day as a child was coming to our event! 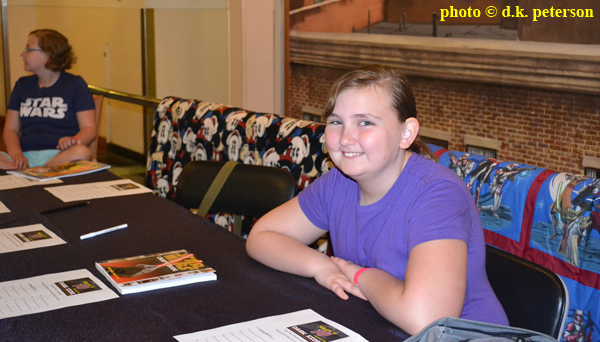 Sunday morning came, and my family and I awoke around 4am to make it to Hollywood Studios by 6 am.  Not an easy task to get my wife and two daughters (ages 10 and 13) up and out the door at that early hour.  We made it to the park, and the girls (all 3!) were so helpful in getting the silent auction set up.  The guests were escorted back to the Backlot Express and dug into the hearty breakfast.  The room buzzed with conversation and excitement. 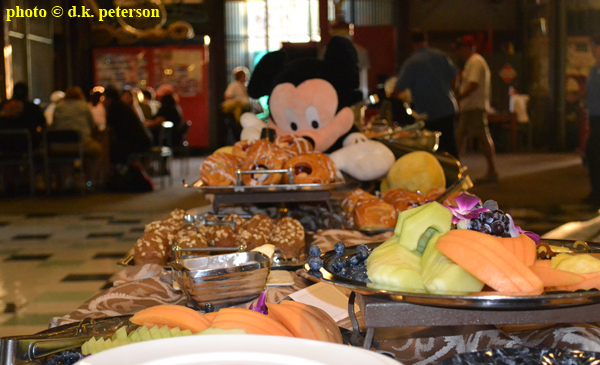 It was interesting to see the ebbs and flows of the morning.  People rushed in, grabbed seats and breakfast, and ate.  Word quickly spread that the park opened early.  Some left, got Fast Passes, and even took a spin or two on Star Tours.  However, as it crept closer to 8 am, the ending time for the silent auction, people wandered back, and hovered next to the coveted auction item.  Everything sold and raised $725. 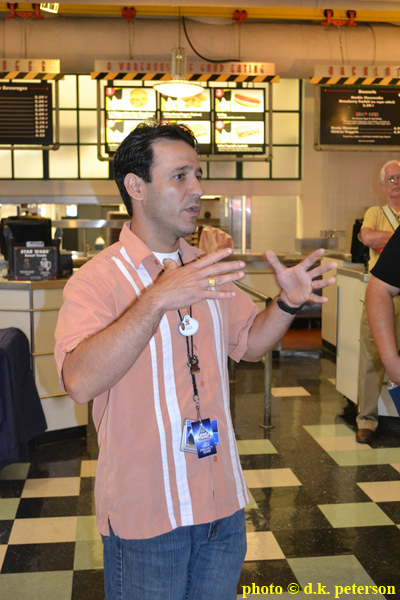 Next, I had a surprise for our guests.  Walt Disney Imagineer Diego Parras, part of the Star Tours project team, entered the restaurant.  We touched base a couple weeks earlier, and he said he would attend.  However, knowing how busy he would be with the opening of the new attraction, coupled with the early start of our event, I didn’t want to announce to our guests his appearance – in case he couldn’t make it.  Once Diego arrived, a circle quickly gathered around him, and people peppered him with questions.  From what I heard, he was getting nitty-gritty questions from all the Disney podcasters and bloggers in attendance.  Diego was so incredibly generous with his time, stayed well past end of our event, and answered every question asked of him.  We had our own “breakfast with an Imagineer!”  [Diego, I owe you a dinner the next time I’m in town.] 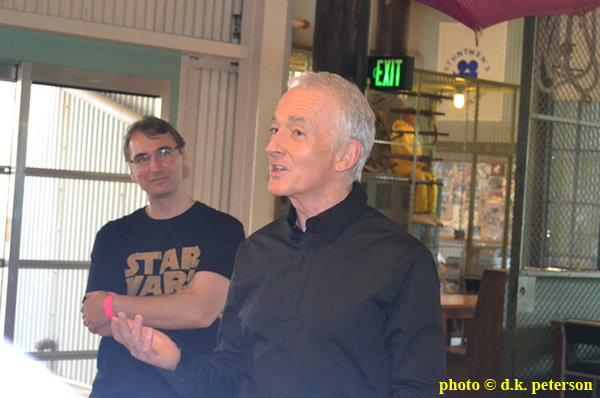 9:00 am – Anthony Daniels arrived.  I was quickly pulled aside by his VIP Guide and was told Mr. Daniels does not handle photos well.  I replied, “No problem, I’ve already told people there was no time for photos or autographs.”  Anthony Daniels was such a professional and commanded the room.  He told us about his personal connection with GKTW and then exclaimed, “Who would like a photo?”  He posed for photos with everyone who wished to have one.  He then gave a story about each of the items he donated to the auction, including original set pieces from “Star Wars Episode II: Attack of the Clones.”  Afterwards, we found a quiet place for the auction winners to have their items signed, and have a private meet and greet with Anthony Daniels.  Once again, Mr. Daniels exceeded all of my expectations. 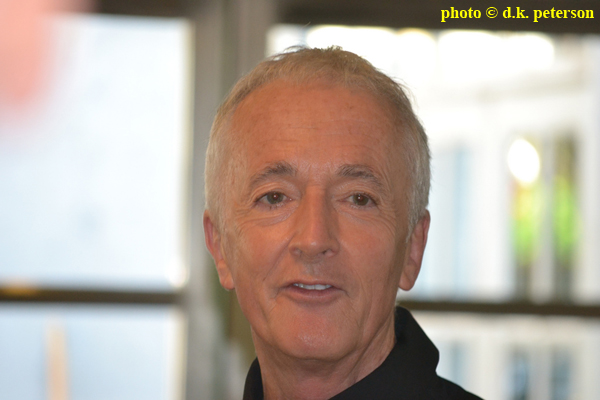 All and all, I would say the breakfast event was a resounding success, and without a doubt the highlight of my weekend.  I met so many friends I had only interacted with previously online, and made even more friends as well.  However one family in particular made a big impression on me.  Rusty, Michele, Mary, and Aiden all showed up in matching purple GKTW 20th anniversary t-shirts.  They were a former WISH family, and both children had received trips to GKTW.  They supported our event as a way to give back to GKTW.  As excited as I was to meet Anthony Daniels, as thankful as I was for Diego Parras to share his time, it was this family that reminded me why we’re doing this fundraiser.  As I counted down to close our silent auction, I heard a little squeal of excitement when I reached number 1.  It came from the girl in this family.  She was thrilled she won a handmade Disney quilt.  That happy squeal gave me goosebumps and made all the planning and work worthwhile. 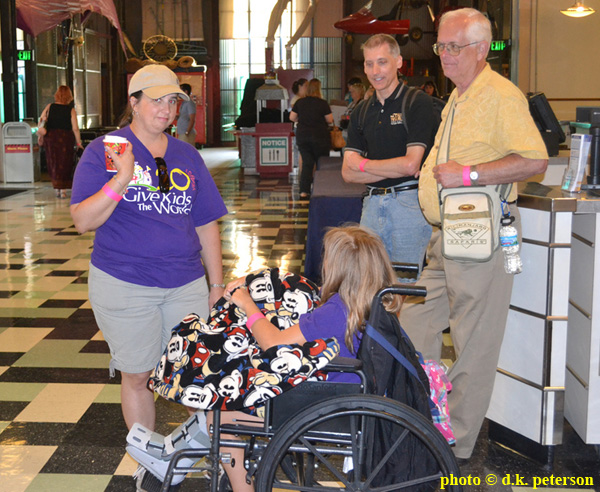