Some of my fondest memories of our visits to Disneyland throughout my younger years include those of going to the Golden Horseshoe Revue.  Back when we used to buy individual tickets to get on various attractions this was one of the few that were sponsored, and so this E-ticket worthy show was free to watch.  I never missed an opportunity to go watch the Golden Horseshoe Revue, even after Disneyland started using the unlimited attraction pass.  One of the highlights for me would be when Wally Boag would come out to entertain us.  He was so naturally funny that the whole audience would continuously break out in laughter.  I still chuckle today remembering his antics during the show.  Read on to hear more about this Disney legend. 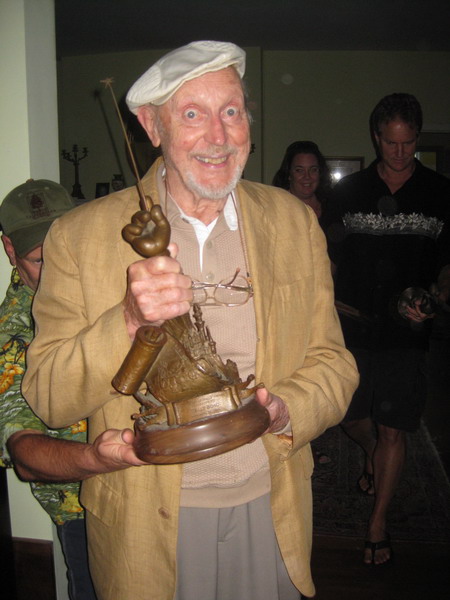 Image: With a twinkle in his eye, Wally poses with one of his Disney Legend awards.

There was one act where Wally would come out as Pecos Bill and would sing with Slue Foot Sue.  She would “punch” him in the face during the song.  He would then spit out the “teeth” she knocked loose –  one at a time.  This would go on for quite awhile, and just when we thought he was finished he would spit out another one.  I used to laugh every time I saw the Pecos Bill routine.

Not too long ago, one of our regular posters on the Disneyland DISboards forum, Cheri, let us know that she would be visiting Wally Boag at his home.  Wally’s son is a friend of hers, and generously offered to let us visit, too.   I was so excited to be able to partake in this opportunity. A group of us met at Disneyland, and drove out to his home in Santa Monica.

When we arrived, his son, Laurence, greeted us at the door and led us to Wally Boag, who was waiting in the living room and looking forward to meeting us, his fans.  He was happy to meet us, and we were beyond excited to meet him.  I can still picture him there with a big grin and that twinkle in his eye.  We were all just a bit awestruck to be in the presence of a Disney legend.  We all surrounded him, and he told us stories of his days at Disneyland, and spoke fondly of Uncle Walt, as he called Walt Disney.

We heard about his interview with Walt Disney, and he gave us a mini-performance of the traveling salesman.  He told us about his part in developing the famous Enchanted Tiki Room show, and how he was the voice of the lead macaw, José.  To our delight, he changed his voice, and we heard José live.  Now, whenever I go to the Tiki Room I think of our afternoon with Wally and his rendition of that famous macaw.

Here is a picture of Cheri with Wally.  She was able to spend the night with the Boag family, so she heard many more stories and saw his copy of the Main Street window that is dedicated to him. 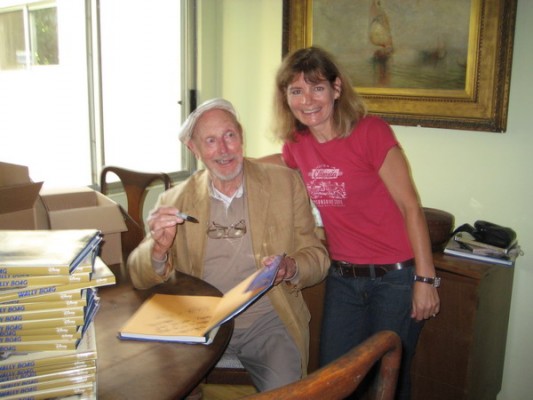 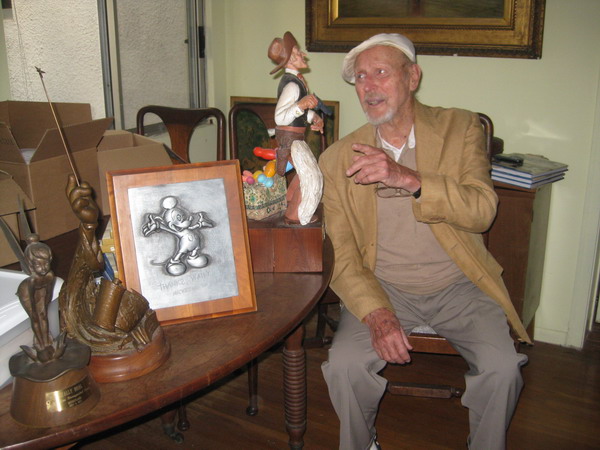 Image: Wally and his various Disney Legend awards.  The Tinkerbell one is for 25 years of service. 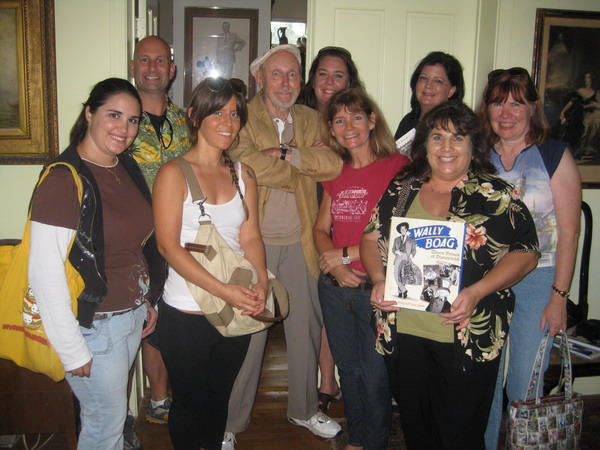 Wally Boag was so gracious and funny.  He autographed his books for us, shared some of his Disney memorabilia, and gave us a glimpse into his life as a true Disney legend.

Laurence also entertained us with stories of growing up at Disneyland as the son of Wally Boag, waking up in his dad’s little apartment over Aunt Jemima’s Pancake House (now the Riverbelle Terrace), and hearing the Mark Twain’s bell on the Rivers of America.  He had us laughing at his story about being Goofy’s special friend, having a certain crush on Snow White, and a mishap that involved the King Arthur Carrousel and Goofy being dragged by his foot. 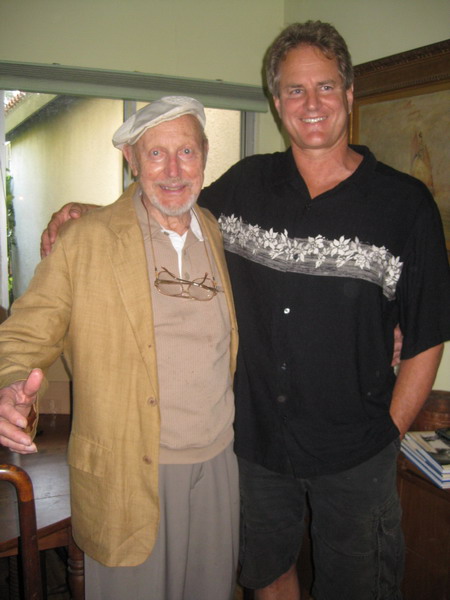 Image: Wally and his son Laurence

Here is my signed book:  “Wally Boag, Clown Prince of Disneyland,” with instructions on making balloon animals, and the carton that the balloons and instructions would come in.  Pretty cool. 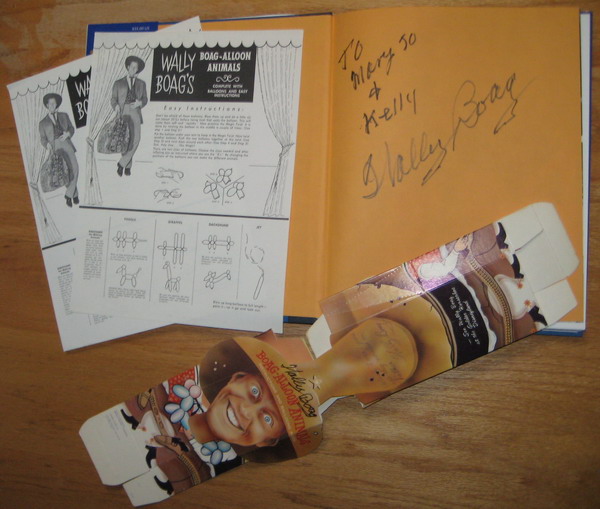 Next time you are on Main Street at Disneyland, look up at the windows just past the Blue Ribbon Bakery. You will see the special window dedicated to Wally Boag.  Every time I visit Disneyland now, I give a little nod to Wally’s window. 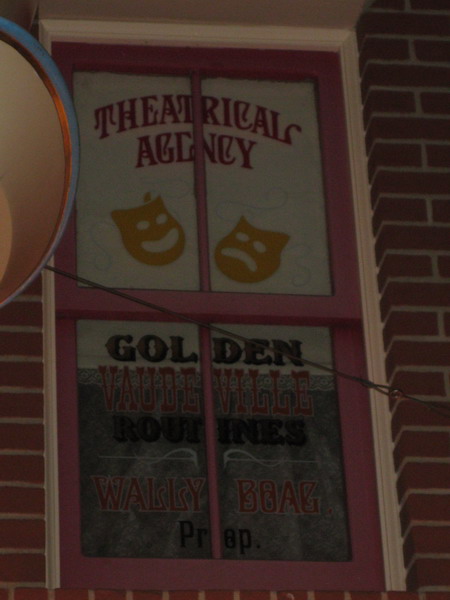 That afternoon stands out as a special event in my life, and I know that the others feel the same way.  Thank you, Laurence, for letting us meet your dad, and thank you, Wally, for spending time with us.  Especially, thank you so much for the pure enjoyment you gave us throughout your many years with Disney. 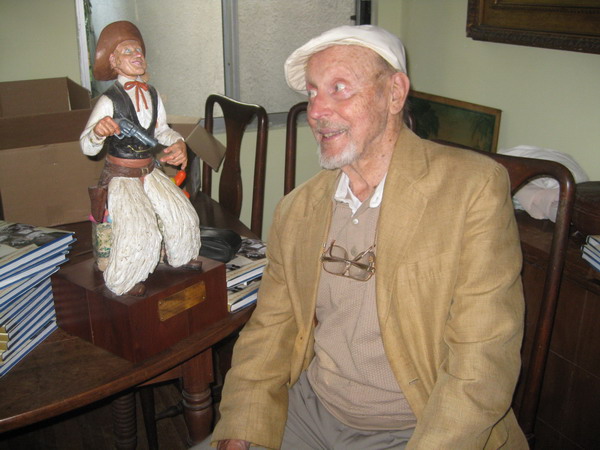 Image: Wally Boag with a model of himself performing as Pecos Bill

Wally Boag passed away on June 3, 2011.  The world, and especially Disney fans, lost a wonderfully talented legend that day.  Those of us who were lucky enough to see him perform live can smile wistfully at the funny memories.  Thanks to his website and Youtube, we can see clips that show some of his very funny acts.

If you would like to learn a little bit more about Wally Boag, I recommend getting his book. It is full of stories and photos, and is a wonderful read.  Steve Martin dedicates the book, and credits Wally with inspiring him to become a comedian. You’ll have to get the book to read just what kind of inspiration he was.  There is a Wally Boag website with pictures and fun anecdotes.  You can also purchase his book from this site.