Soundsational?  Is that actually a word, and, if it is, what does that word mean to you?  Well Disneyland feels that the “Sound” of its famous music creates the basis for a “Sensational” parade, so if it wasn’t a real word before, Disneyland has made it one now!  We were on hand for the first two public performances of the new Mickey’s Soundsational Parade and I was able to get photos and videos that really connect with the vibrant color and feel of this new parade!  Come and have a look! 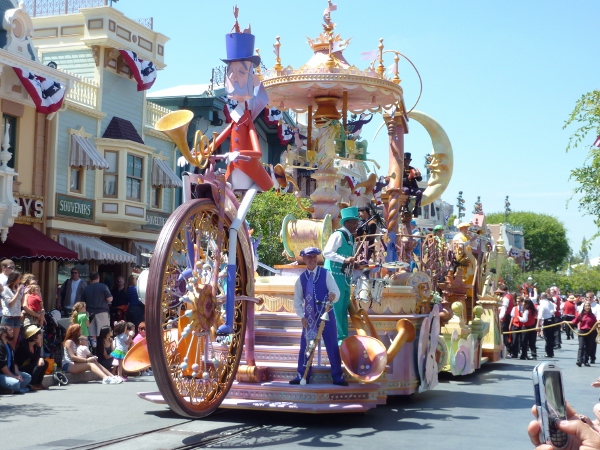 The theme of this parade is classic Disney music, but, interestingly enough, you won’t be hearing the original versions of these classic songs.  Instead, a lively new tune provides a background, while the featured music is intertwined with new rhythms.  It also brings a return to the traditional style of parade – the one that moves continuously down the route.  No stationary “performances” unless something happens, such as an excited child running out to join the characters or a float or costume malfunction.

The first thing I noticed about Mickey’s Soundsational Parade is that you don’t hear it very far ahead of its actual appearance.  What I mean by that is that the normal looping, background theme music for Main Street played as it normally would.  The parade was almost to the first buildings of Main Street before we could even notice its presence.  Several storefronts later, not a melody, but a rhythm began to reach us.  My guess is that it was designed that way to highlight its opening stars – an amazing, energetic drumline! 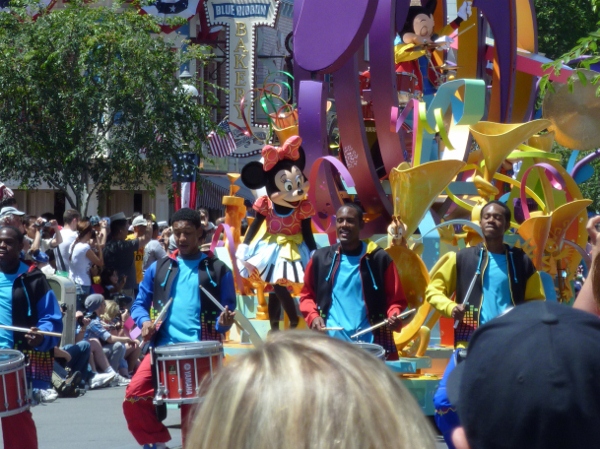 Due to the large amount of crowd noise and the fact that they are using snares, their amazing rhythms don’t carry far enough to generate that excitement level that comes from having pre-“parade themed” music coming from the loudspeakers.  When the drumline comes past you though, their skills and energy really shine – especially when their talent reminds you of such great squads like Morehouse, Alabama State and Morris Brown.

The first impression for frequent Disneyland guests is that the colors and costume styling of the drumline and of Mickey’s Float are reminiscent of the scheme used in last year’s Celebrate parade.  I think, for the folks who liked that parade (which also made use of live drummers), it makes a nice transition.  For others who are expecting the big change that comes with designing a new parade, it may seem like a bit of an odd choice.  However, you start to notice the differences.  The colors are softer and not as primary-based.  The costumes have a bit more flow and animation style.  Then, you hear that the music for this float is a hipper, percussion-based version of the “Mickey Mouse Club March“.  This parade isn’t so much about dance, like Celebrate – it’s about how music plays a big part in each of the featured movies. 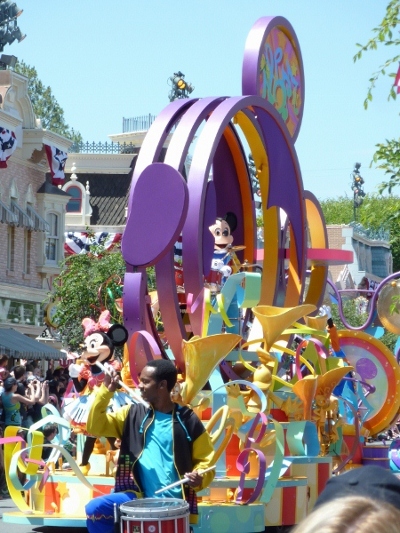 Following Mickey’s lead, Goofy comes along with his own small float that is really a large drum.  Chip, Dale, and Pluto escort him along, as he takes time to join in the rhythms. 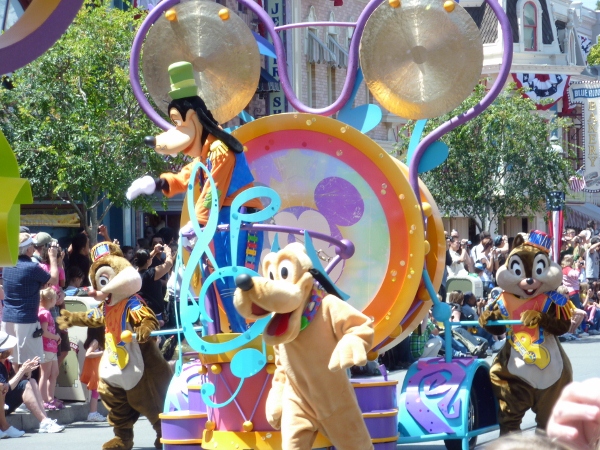 The marching tune fades away as the next float approaches.  Exotic Arabian dancing girls, including a golden one, even wearing brass lep on her hands (those are Thai folk dance finger nail extensions – I had a heck of a time Googling them…).   Each of the other dancers has cymbals on her wrists, to give an interesting twist to the percussion sounds.   Aladdin rides atop a large drum, with Genie in the shape of a gong as his backdrop.  The music changes to his movie’s parade song, “Prince Ali“. 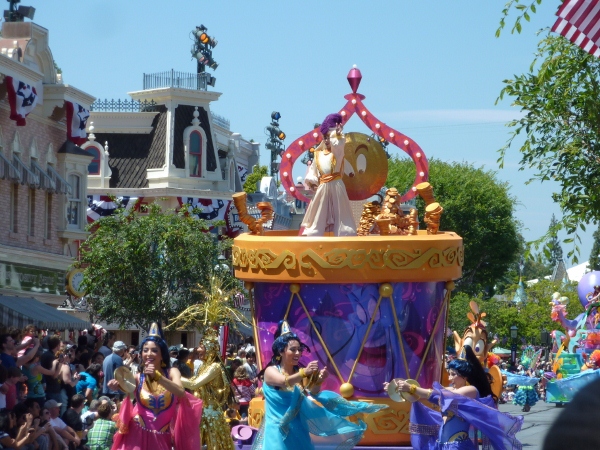 To complete the show, Abu and his cymbals follow along – with a little help from a colorful turbaned aide. 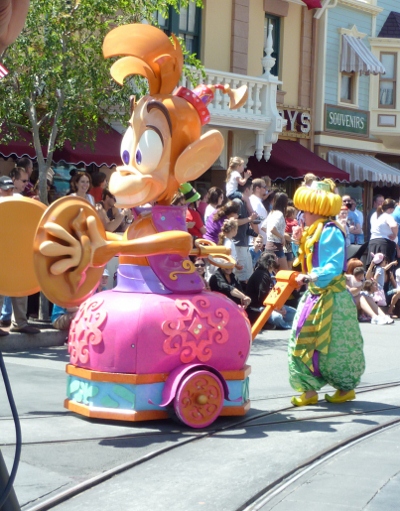 The Soundsational music returns as the next float comes into view.  We frequent Disneyland guests always come to expect extremely creative costuming to accompany The Little Mermaid’s float and this parade is no exception to that expectation. 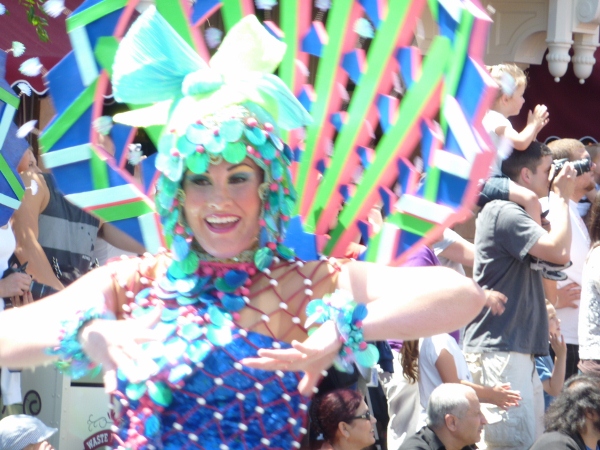 Colorful scallop shells and jellyfish glide down the route to the calypso music of “Kiss the Girl“.   Sebastian and his gallant aquatic steeds lead the procession, as Ariel rides above, “swimming” as the “hot crustacean band” plays! 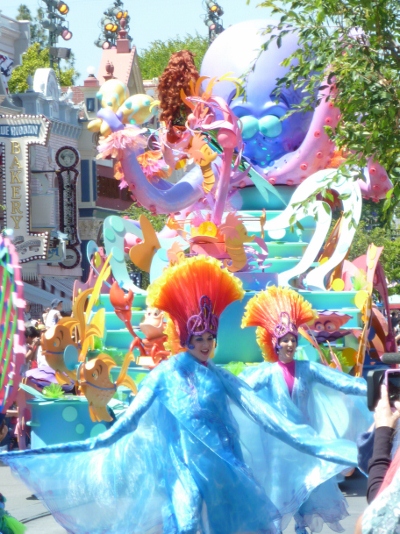 Ariel is always a crowd-pleaser, as she loves to interact with guests along the route.  I’m wondering if this version of her tail might be one that King Triton gave her when she “came back to visit”.  It’s not nearly as elegant as her original one…. 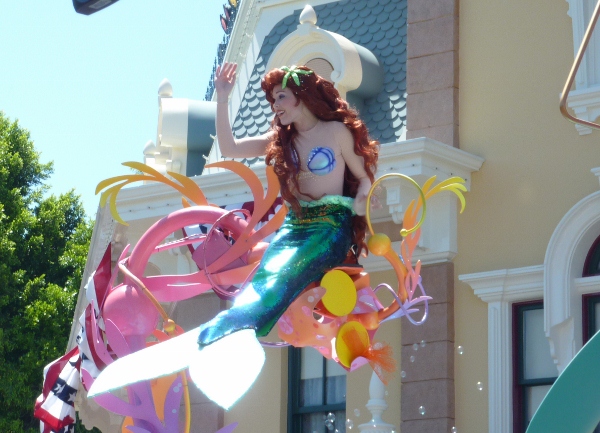 Chasing after the band, is a delightful hermit crab with a large pair of maracas!   I thought this was the most creative use of traditional parade technology I had seen in a long time.  He spun so fast that this isn’t the greatest photograph, but he is just the cutest little guy ever! 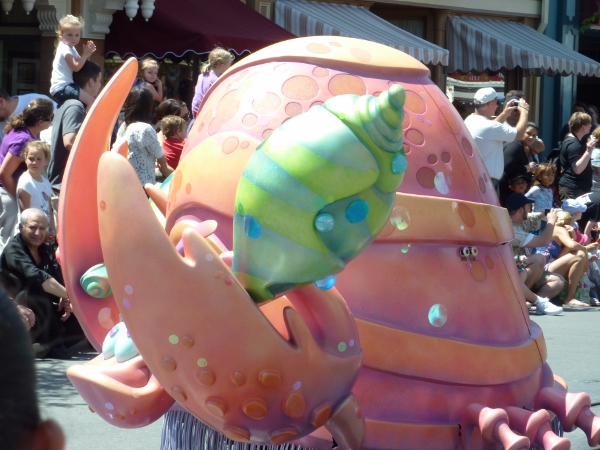 After one of those spacings (basically a planned break to help cast members allow guests to cross the parade route) and some more of that difficult to understand theme song music, we see the next drum come our way.  The theme music plays with the addition of maracas and oles, giving tribute to The Three Caballeros.   José Carioca (the parrot) and Panchito Pistoles (the rooster) join Donald Duck 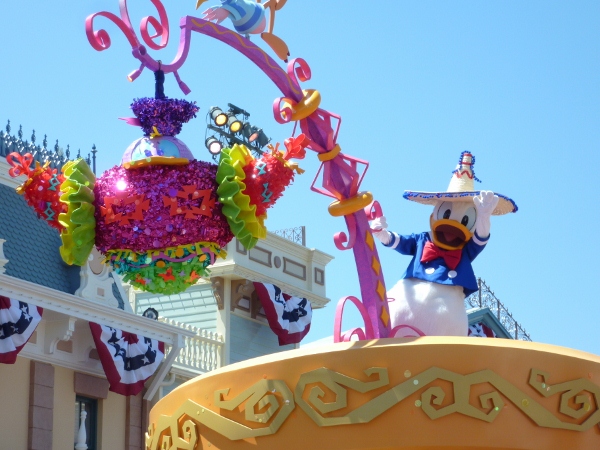 in a festive piñata party.  Now, it took me basically an entire day and watching the video I shot of the parade about 7 times to realize that the creatively-dressed performers in front of Donald’s drum were in reality dancing pinatas!  Now, I’ve saved you the trouble of trying to figure that out… 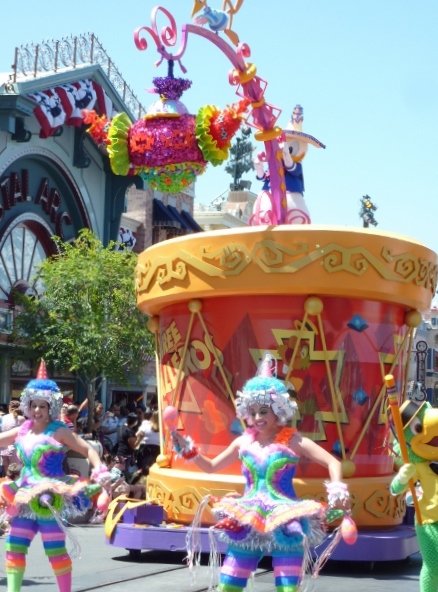 My favorite touch was the addition of festive Mexican dancers bringing up the end of this segment.   Their dresses were so amazingly airy.  (Although a fabulous photo of the skirt as she turns, I must admit that I see “watermelon” when I look at this performer.) 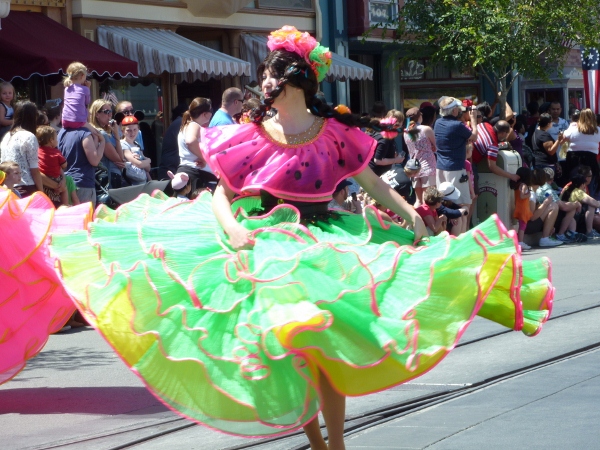 More ladies in voluminous skirts now come into view – attendants to the Princesses‘ Float.  With Cinderella‘s staircase and clocktower (which shows that it is almost midnight) in front and Belle’s town fountain in the back of the float, Rapunzel’s garlanded Tangled tower rises up the middle.  Along with Snow White, Aurora, Belle, and  Cinderella, Rapunzel royally greets the crowd to the tune of “I See the Light“.   I was thrilled to see this change from the traditional princess float.  It creatively mixed elements from several of the movies, while giving the new princess her place in Disney’s royal family. 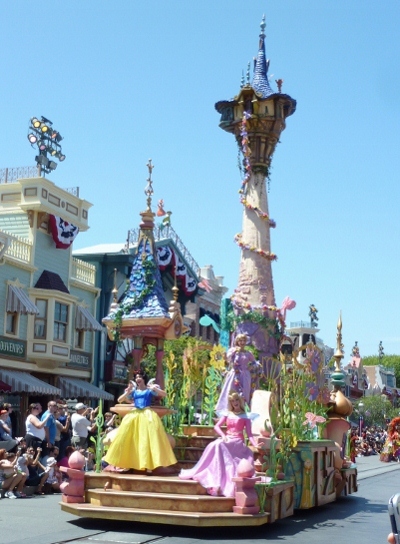 The music transitions to “The Circle of Life“, welcoming another drum carrying Simba, star of The Lion King.  Turk, King Louie, and a passel of monkeys take the lead with an amazingly costumed African dancer, whose creatively interpreted dress is on wheels!   It’s never a Disney parade without stiltwalkers and the African drummers in the rear are not a disappointment! 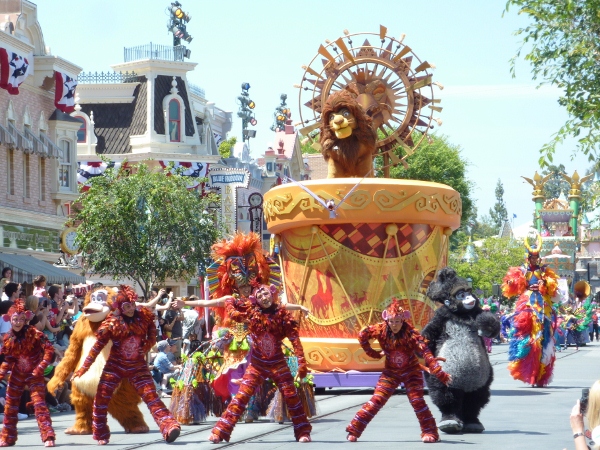 As they pass, the refrains of Princess and the Frog’s anthem, “Dig a Little Deeper“, bring a colorful group of New Orleans riverboat passengers 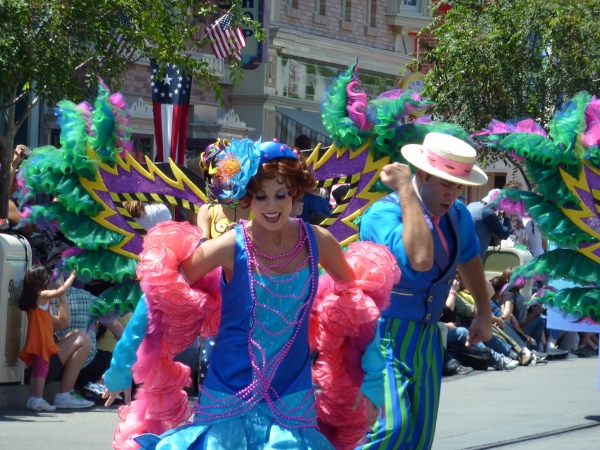 and a pair of extraordinarily large Mardi Gras masques dancing toward us. 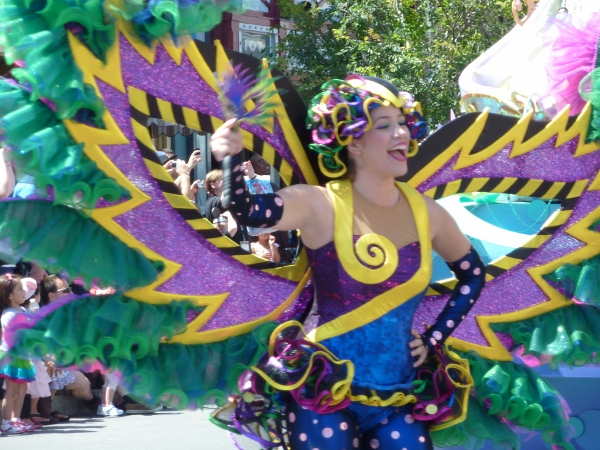 Looking up, we see Ray leading  Princess Tiana’s parasoled skiff through the bayou lilypads.  Louis is not far behind, playing “Gonna Take You There” on his trumpet on the bow of a gilded riverboat – complete with trombones on the sides and a paddlewheel on the back! 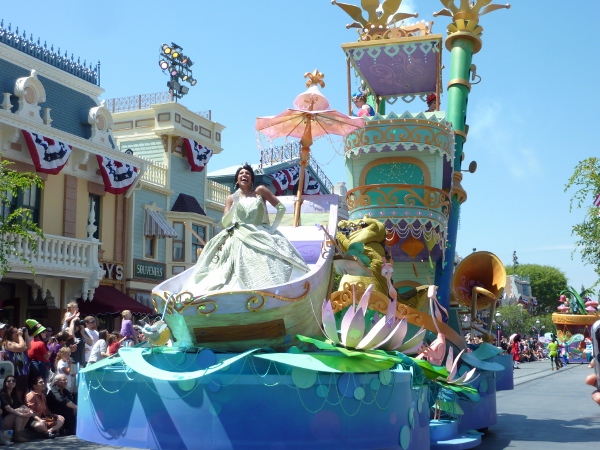 From the serenity of the bayou, we are taken to the adventures of Neverland, by Peter Pan, Captain Hook, and a crew of scruffy pirates to the tune of “You Can Fly!” 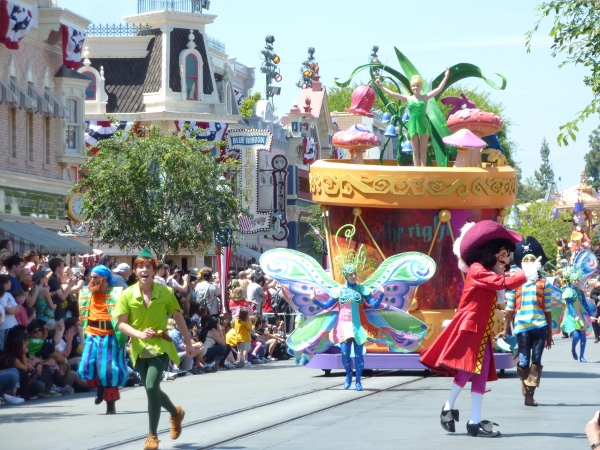 Of course, Neverland is not complete without the presence of Tinkerbell and some beautiful butterflies.  The details on these performers (such as the custom dyed wings and appliqued scrollwork) were elegant and some of my favorite costumes. 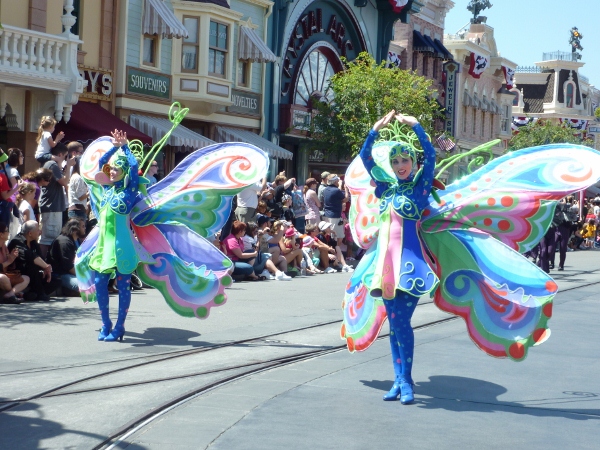 Fittingly enough, we were then brought the last float.  Rightly so, the chimney sweeps usher in possibly the most famous muscial collection in Disney’s history – the Sherman Brothers songs that make up the classic musical, Mary Poppins. 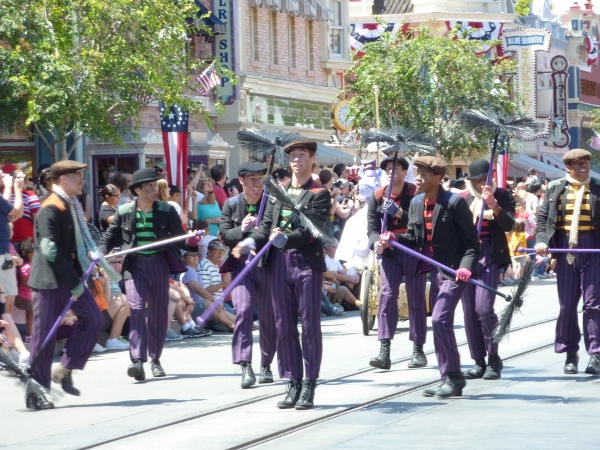 “Step in Time” was woven into the theme music and the choreography of this regimen was as impeccable as that of the movie.  Following the sweeps is none other than Mary Poppins herself, accompanied by Bert on free-wheeling carousel horses.  I thought this was an excellent use of basic transportation technology! 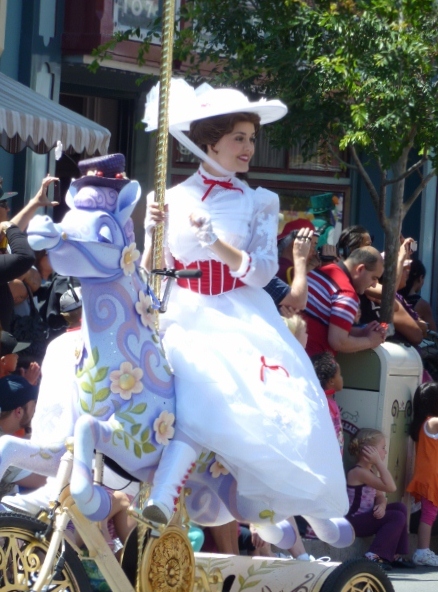 Of course, Mary and Bert are followed by Disneyland’s one and only Pearly Band, travelling in style under the power of a magnificent velocipede! 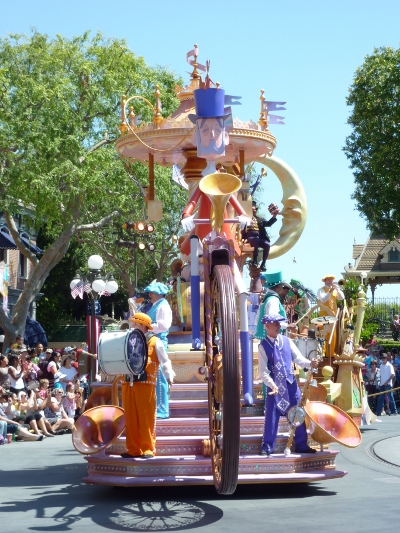 Behind them, more chimney sweeps croon on the rooftops, under the light of the moon, while the Pearly horn section accompanies them. 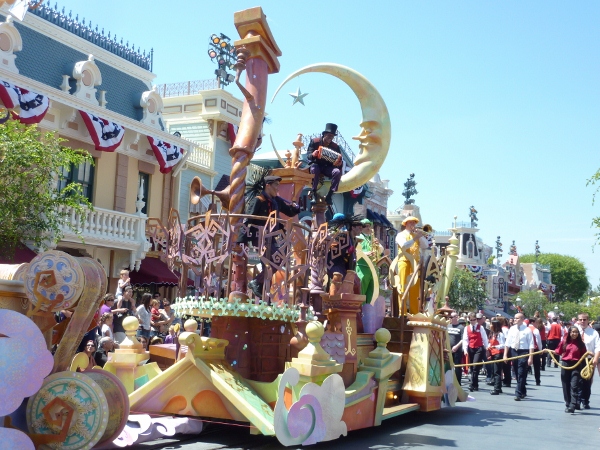 The sounds of this sight draw the conclusion of Mickey’s Soundsational parade!

My overall impression was one of playful color, cast members having fun, and lots of music.  I felt the floats really progressed in scope and quality of entertainment as each one passed!  The theme music even grew on me a little.

In some ways I wish that there was a bit more of a finale or “kiss goodbye”, perhaps.  Just something other than the final rope following the float so closely.  Maybe even just a simple set of chimney sweeps waving to the adoring crowd – kind of like Dopey did in the Parade of Dreams from a couple years ago.   Who knows?  Maybe one time we might just see that!