Blue Sky.  That’s how high you should think, dream, and live in Disney Imagineering terms.  In fact, that’s how high of a vision the folks who have been redesigning Disney California Adventure have.

Now that the new year has begun, the Blue Sky Cellar in California Adventure has reopened with all new exhibits on what to expect in the coming year and a half.   I’ve taken the liberty of photographing many of the new exhibits and bringing you the video shown below, so here’s a sneak peak of what’s behind the construction walls that are causing so much concern!

Now that you’ve watched the video, let me show you some details of what to expect.  Let’s start with the most exciting project – with the least information! Cars Land! 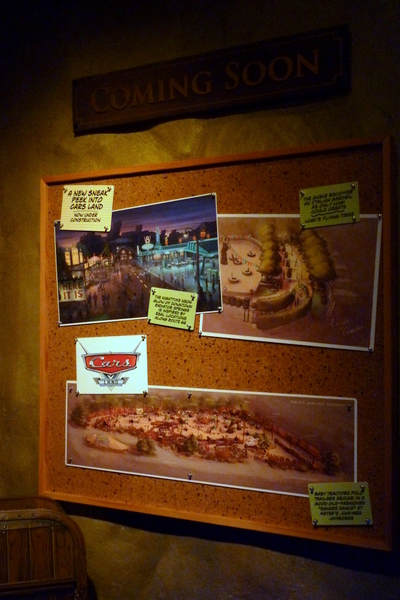 The meager exhibit shows glimpses of Luigi’s Flying Tires, Flo’s Diner, and Mater’s Junkyard Jamboree.  I’m glad the video had the demonstration of the Radiator Springs ride vehicles, because there wasn’t much detail of the other attractions to come.  I’m sure we will see more of this as other projects are completed.

Now on to other details.  This photo is interesting, as it shows overhead, aerial shots of the park in two construction stages – the most current status is the top photo, marked with pins. 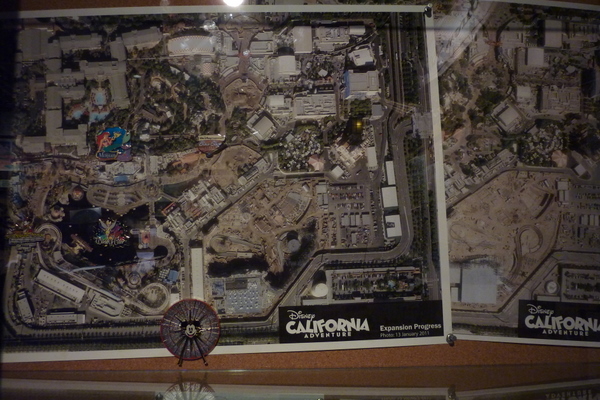 You can see that there is significant progress being made on the Car’s Land Structures, as well as other construction zones.  Of course, that leads to a discussion of the newest zone that has gone up – the Main Entrance/Buena Vista Street.

Those beautiful letters have gone from the main entrance – the CALIFORNIA that Tom showed us in his California Adventure 10th anniversary blog.  The large, reflective sun is gone as well, replaced by walls and the temporary ElecTRONica stage.

Like it or not, while temporarily chaotic, it’s what must be done to start the process of building Buena Vista Street as the new park entry attraction.   I predict that these changes will be the source of the most complaints.  Here is a look at the ideas behind the controversy! 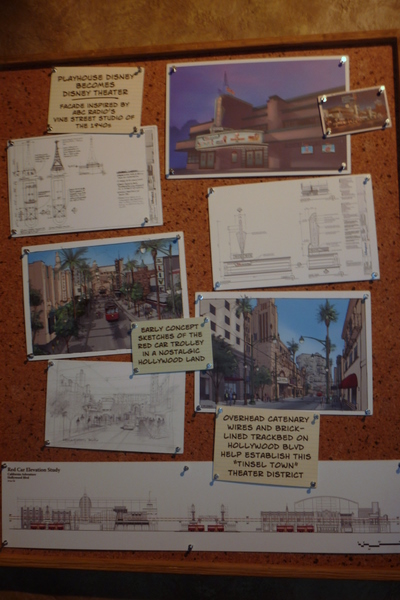 Notice the inspirations and architectural drawings… 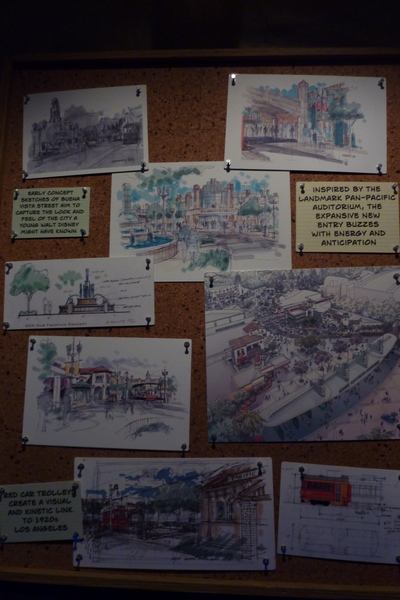 The new street will have shops, a Red Car Trolley line, and the crown jewel – the replica of the Carthay Circle Theater – home to the groundbreaking premiere of Snow White.  These additions are still a year in the making, but I think they will really add some cohesive theming to the park (a big complaint of many when the park opened).

Now let’s talk about things that will actually be opening this year.

Goofy’s Sky School is the retheming of the old Mullholland Madness roller coaster.  As you can see by the display below, the existing ride is being “slightly” modified so that Goofy can teach you how to” fly” over and around his little corner of Paradise Pier.  The new theming seems to make this coaster a cross between the theming of the “recently-retired” Barnstormer at Walt Disney World’s Magic Kingdom and the track design of Primeval Whirl at Animal Kingdom.  It certainly seems to feature several similar elements, including new “airplane” theming of the cars, a barn, and (rumor has it) chickens! 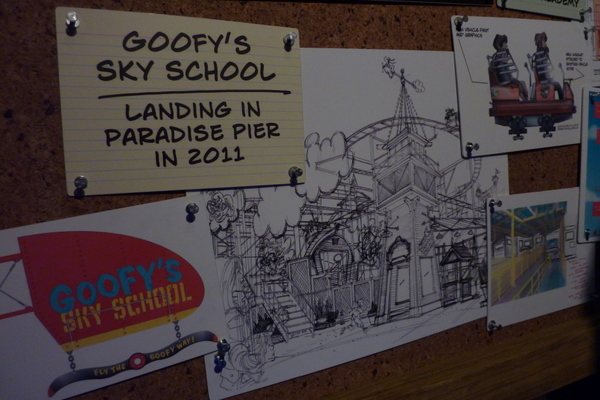 Next door to the Sky School, the old Burger Invasion and Pizza O Mow Mow eateries are being transformed into a new venue that is reminscent of the garden atmosphere of many LA restaurants  To me, the designs shown make it feel quite a bit like the famed “Los Angeles Farmers Market” – and if you see the “story” notes on the board, you can tell I am not far off.   The LA Farmers Market is noted for the wide variety of immigrant chefs who have opened small open kitchens for customers, who eat at tables around them.  From the exhibit, you can see that some of the restaurant names being considered are Boardwalk Pizza and Pasta and Paradise Garden Grill. 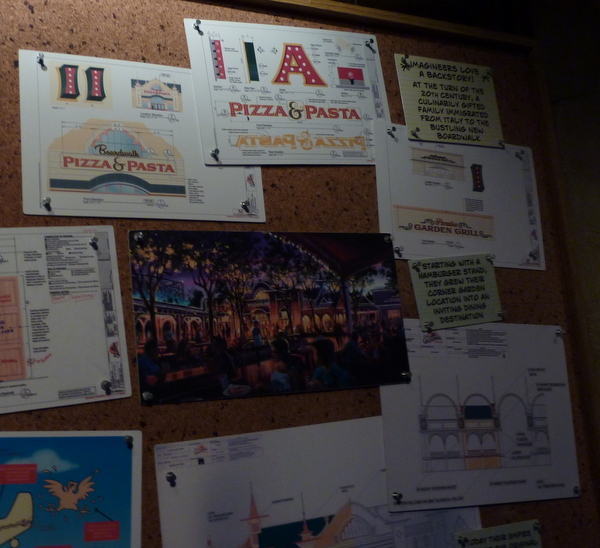 Now that I’ve talked about all of the things that are coming in the more distant future, let’s talk about the excitement for this spring.  It will even give a bit of a glimpse into what the folks at the Walt Disney World Resort might see in their Fantasyland Rehab….  The Little Mermaid – Ariel’s Undersea Adventure! 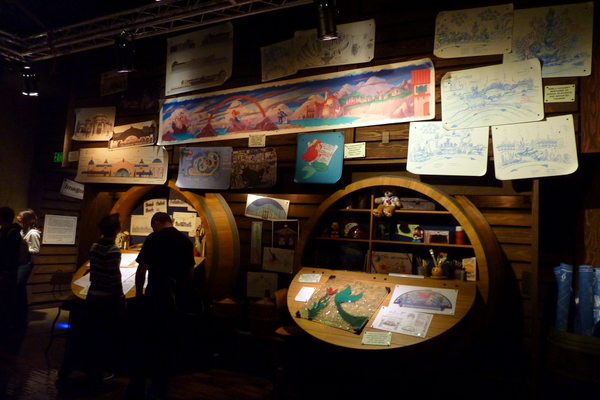 The room is full of details that give quite a tease into the new attraction, from blueprints of the building, 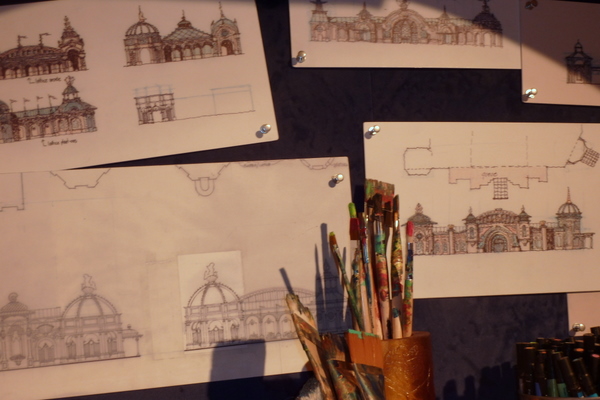 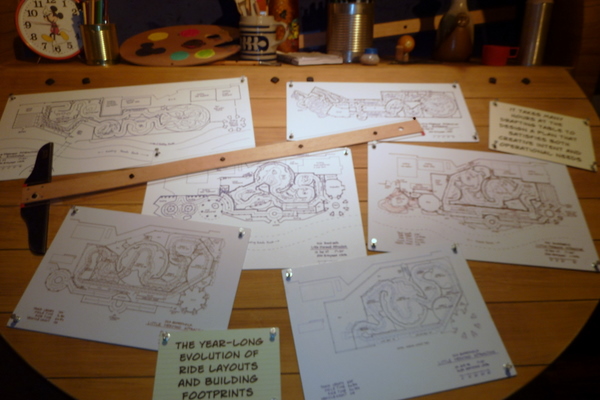 to samples of the artwork, 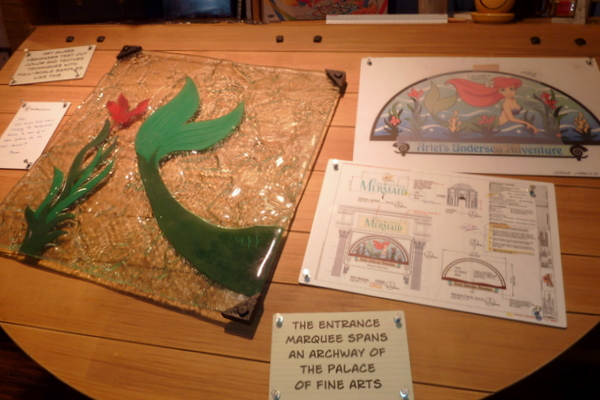 to a scale model of the actual ride. 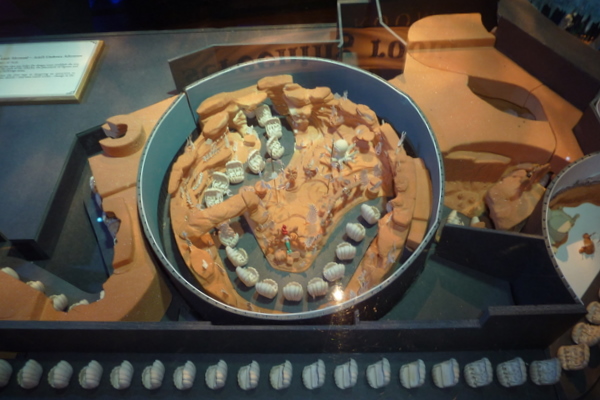 For someone that is a “How does it work?” fanatic, I thought this was one of the most interesting parts of the exhibit.  While a normal part of many architectural models, for those of us who aren’t trained in working with that level of creative detail on a daily basis, I thought it gave us an extraordinary glimpse into the minute details of building an attraction.

For instance, here is a glimpse into the grotto, where Ariel and Eric almost kiss…. 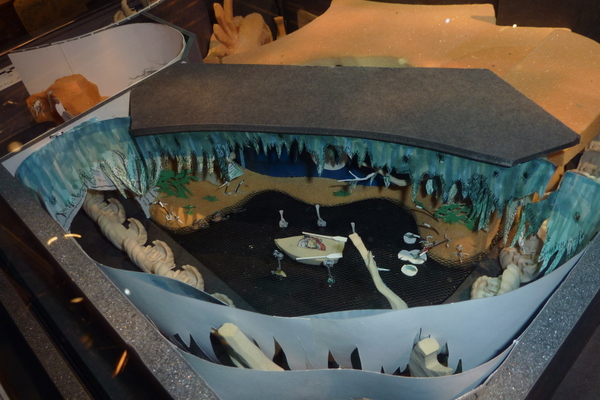 and another glimpse into Ursula’s lair. 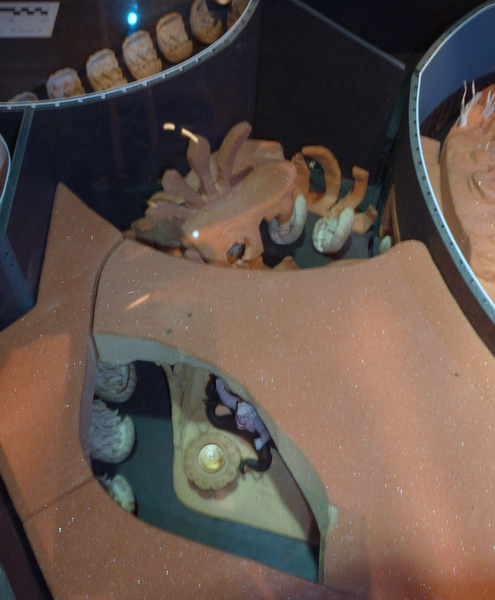 One of the additional treats was to see a mock up of the blacklight painted scene, to demonstrate a sample of how they use the special paints and lighting to create that unique Disney feel. 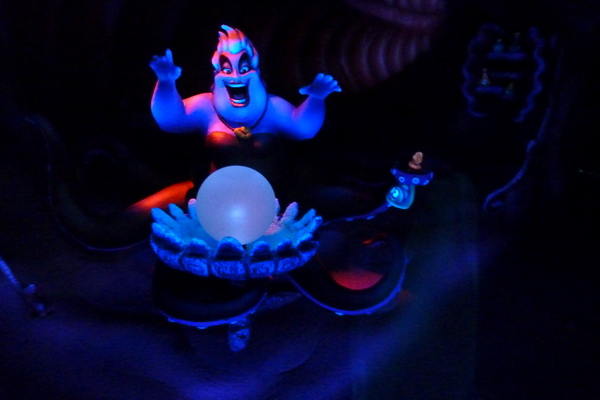 I know my girls can’t wait for this attraction to open.  Each time we are in the parks, they ask if it’s ready yet!

I would be remiss, if I didn’t end this blog with a final photo of that wonderful interactive map of the park.  From the video, you could see that it has several wonderful surprises.  I could have stood there for quite awhile and still not have seen them all! 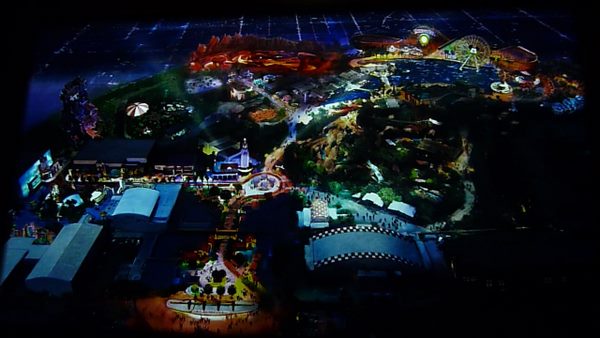 I hope you’ve enjoyed your tour of the recently re-opened Blue Sky Cellar.  Whenever I see those construction walls, I try to always think about what’s coming up from behind them and how exciting it will be for the visitors that will get to see the final products!

Photos and video by N. Johnson