I’m very excited.  Last July, I talked about the design and development of Disney Vacation Club’s newest destination resort , Aulani, in the Ko Olina resort area of Oahu, Hawaii.   Now, here it is February – just 7 months or so from opening day!

Thanks to our DIS Unplugged friend, Ros Tobe, who visited the facility in late January, we have a great look at the construction in progress.  There are photos of the exterior construction, as well as images from model rooms in the Aulani preview center.  Come along with me as we take a look at the new resort! 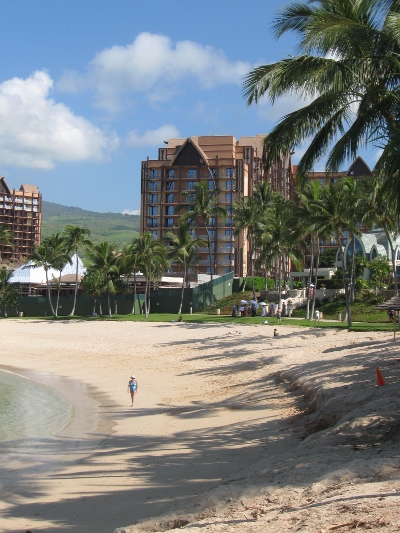 When on Oahu, it’s great to take advantage of visiting the preview center, because it allows you to see both the model villas, as well as get a sneak peek at the exterior construction. 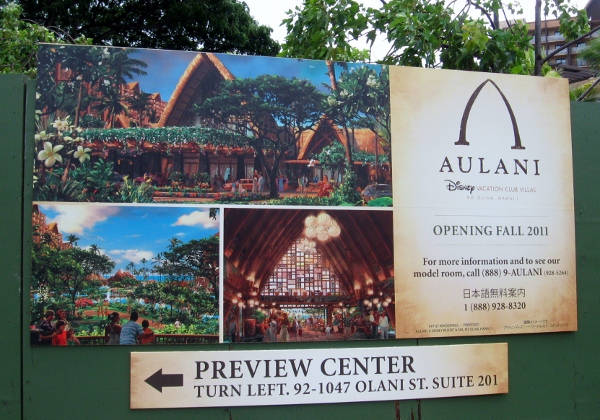 I thought it might be fun to compare the photos I took of the resort’s scale model with the actual construction angles.

Let’s start at the front, with the model of the Hale House or the resort lobby building. 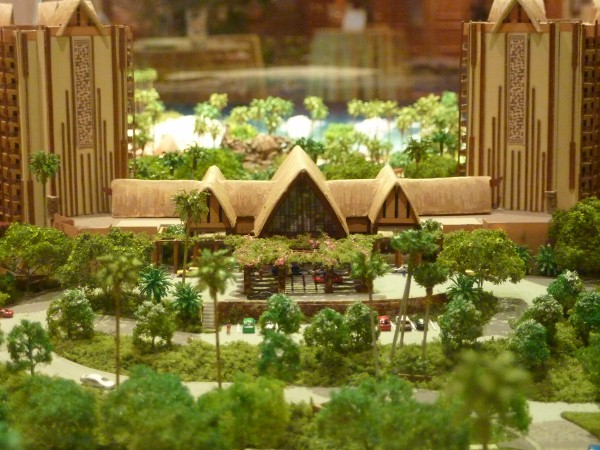 And here’s the current exterior.  While there is still a lot of work to do, you can see how it’s shaping up like the model above. 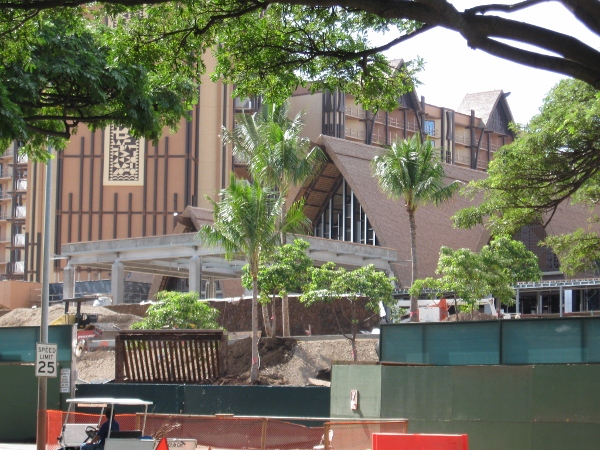 As we move around the side of the resort, toward the display villas, let’s take another look at the model. 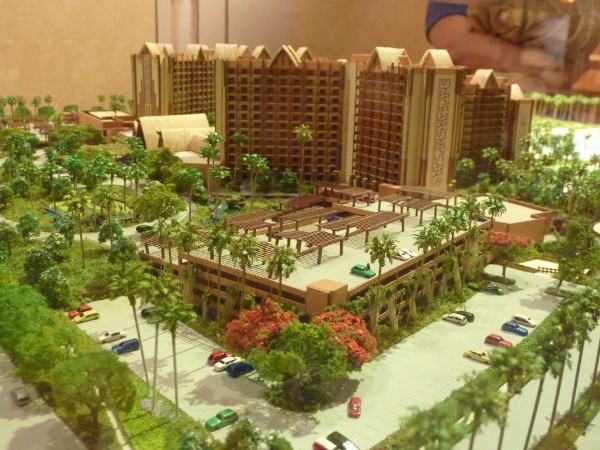 Here’s that very same parking structure, well on its way to completion. 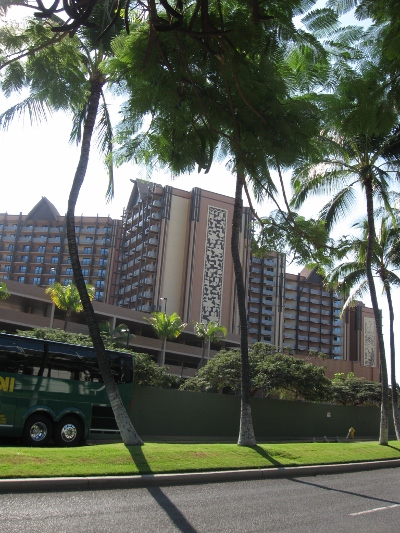 This detail photo, taken from the northern beach access road, shows some of the amazing detail of the hapa cloth-inspired designs on the front tower ends, as seen in the right side of the model.  The shorter building at the bottom left is the new Ulana spa. 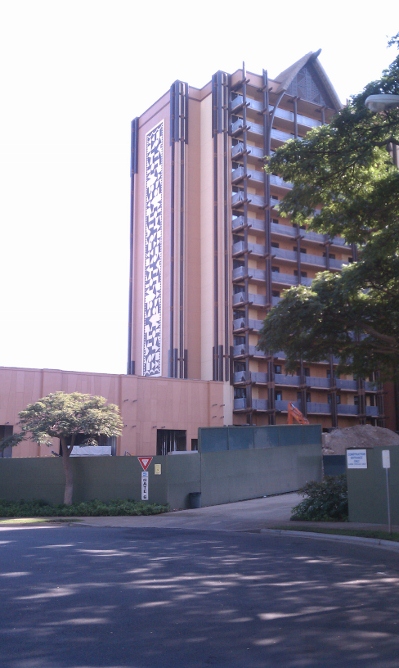 Now let’s move to the rear of the resort, with its most picturesque perspective. 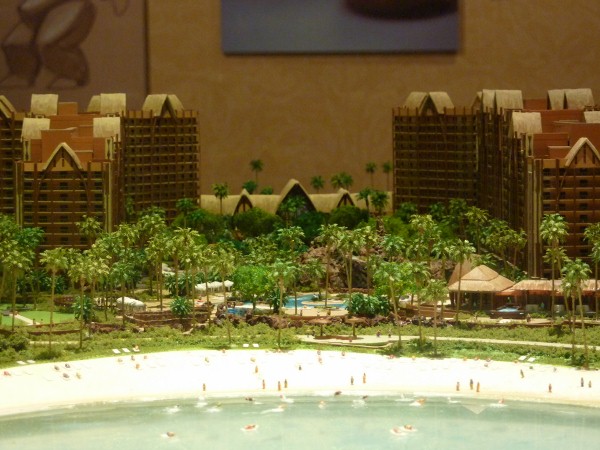 While we can’t get this same great view of the model without a helicopter, we can get this… 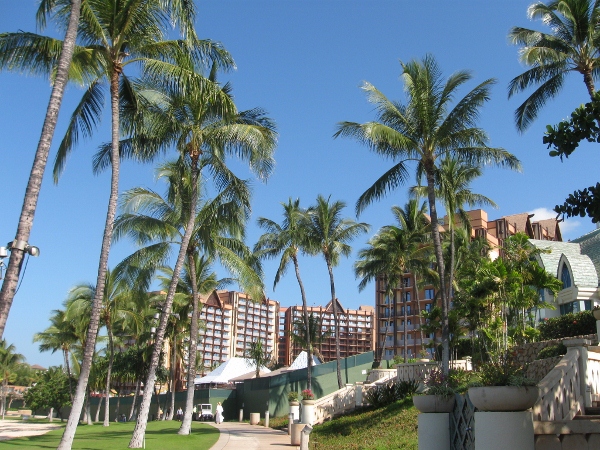 When you come to the preview center and come out onto the public access beachfront walk, you are greeted by the following vista of the resort.

A closer inspection shows the distinct wings of the northeastern or “windward” towers.  The stairs lead up to the existing Ko Olina Wedding Chapel and garden.  Just behind the green walls, you can see that construction on the roof of the new buildings that will house the ‘AMA ‘AMA Beachside Restaurant, the One Paddle, Two Paddle quick service location, and the Off the Hook bar/eatery  is well underway. 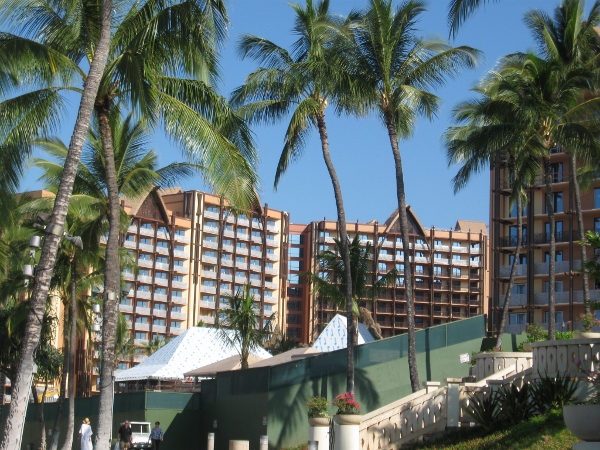 Here’s another view of the same construction area – notice the amazing artwork on the exterior perimeter walls of this wing.   Each tower has a different story/design on it, adding to the richness of the resort’s theming. 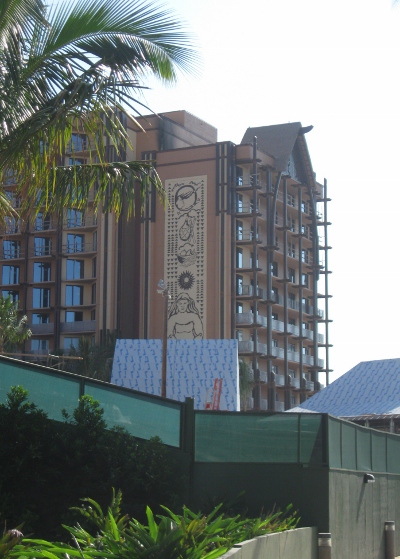 Moving more to the interior of the resort, you can also see the progress being made in the construction of the pool’s rockwork.  The pool areas – the Waikolohe Pool –with its body slide, the Waikolohe Stream – with its twists and turns, the Menehune Bridge water play area, and Rainbow Reef saltwater lagoon are being landscaped with “natural” lavarock formations and lush native plants. 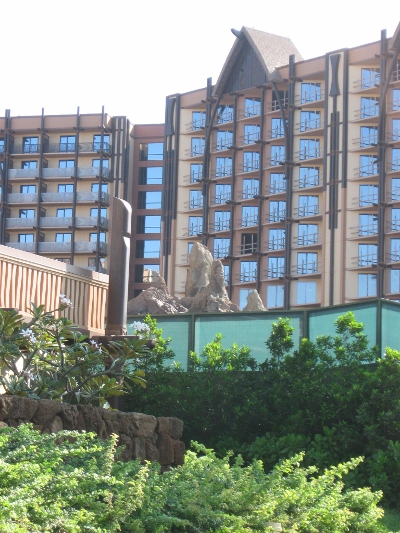 Now for the view you’ve all been waiting for – the Kolola Lagoon. 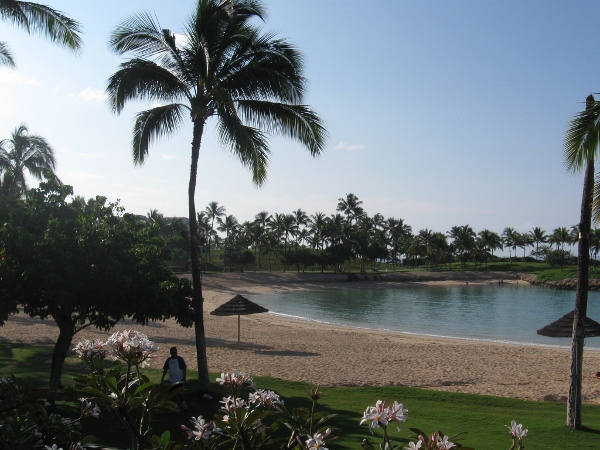 Now that you’ve taken a few moments of tranquility with that photo, let’s move on to the interior spaces, namely the resort accommodations.  Ros gave us some great insight into the room decor.

Since the studio accommodations are more like a standard hotel room, let’s start with the one and two bedroom units.  The design layout is very similar to that found in the newer Disney Vacation Club units, most notably the Villas at Disney’s Grand Californian Resort and Spa, Disney’s Saratoga Springs Resort, and at Disney’s Animal Kingdom Lodge.  It has the rectangular room layout, with the kitchen at the entrance. 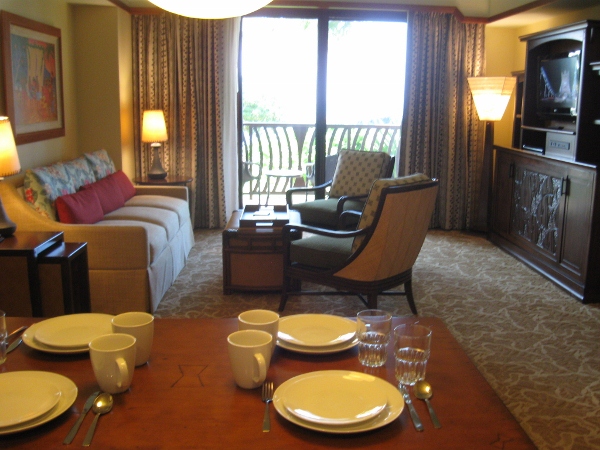 The colors and furniture style are very indicative of relaxed island design. 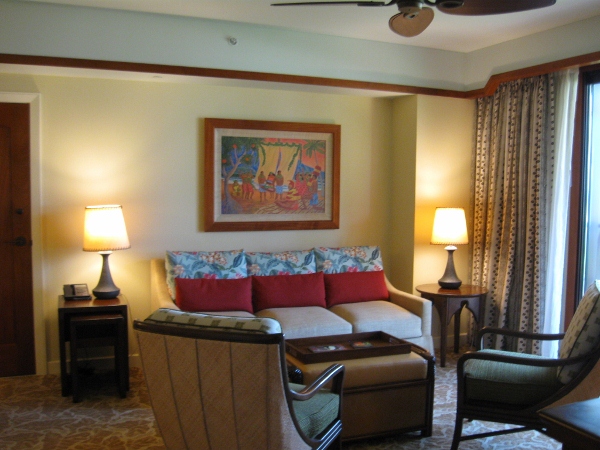 On the other side of the room, you find a feature that was first found in the Grand Californian villas – the pull-out Murphy bed, which allows a one-bedroom unit to sleep 5 people. 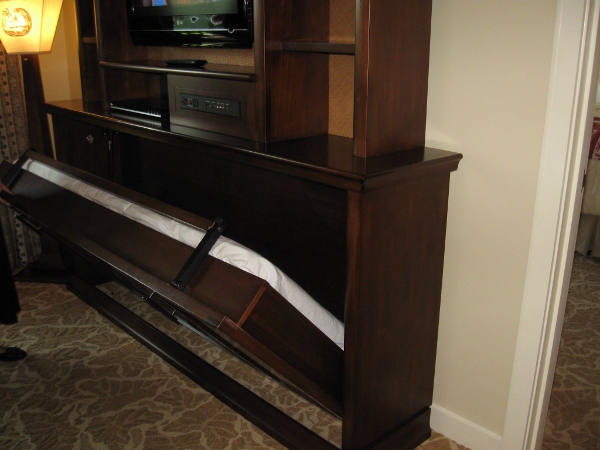 As you turn to the side, you find the slightly smaller kitchen, akin to Saratoga Springs, with a banquette dining area.  In this design, the table is more prominent, instead of up against the wall. 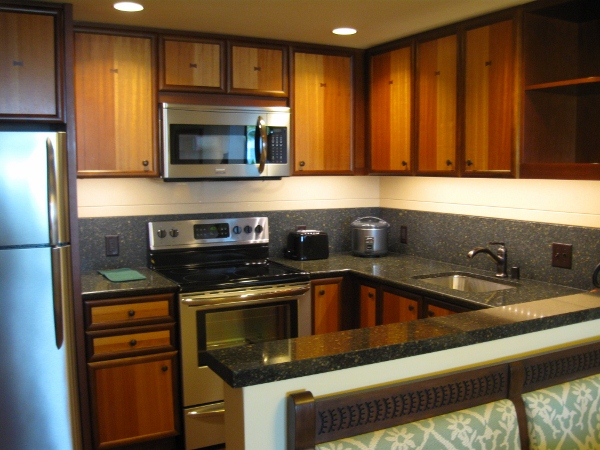 I like this change, as it makes it more of a table than the other resort layout designs and more a part of the room to  allow for more family interaction.  Notice the Disney touches in the upholstery. 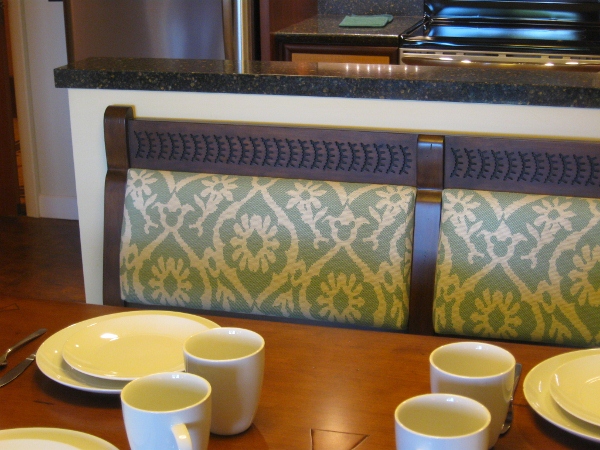 Moving on to the bedrooms, they have a real touch of island style, right down to the beautiful, traditional Hawaiian quilts on the beds – which include a special Disney touch. 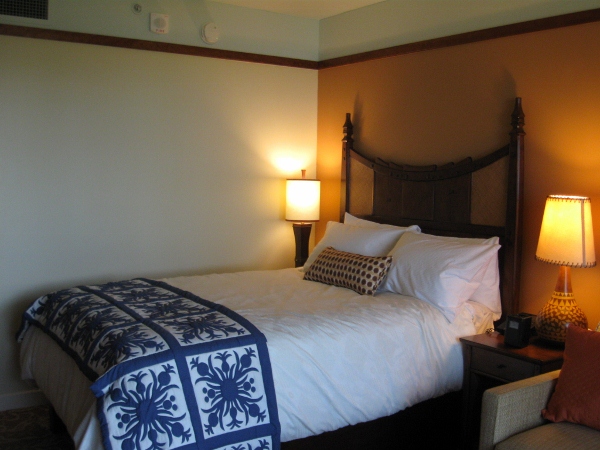 This is the queen bed found in the studio villa, which also features a seating area with pull-out sofa. 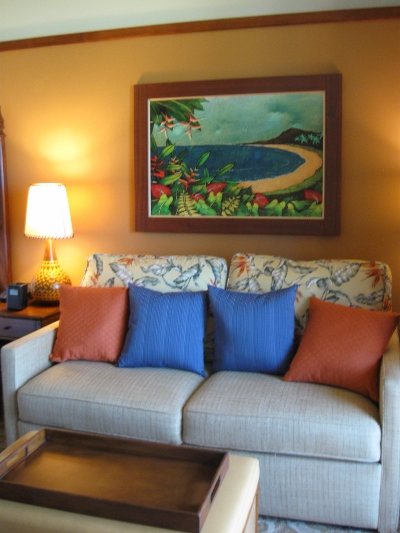 The one and two-bedroom units feature a king-sized bed in the  Master Bedroom, with a slightly different color scheme and more extravagant headboard. 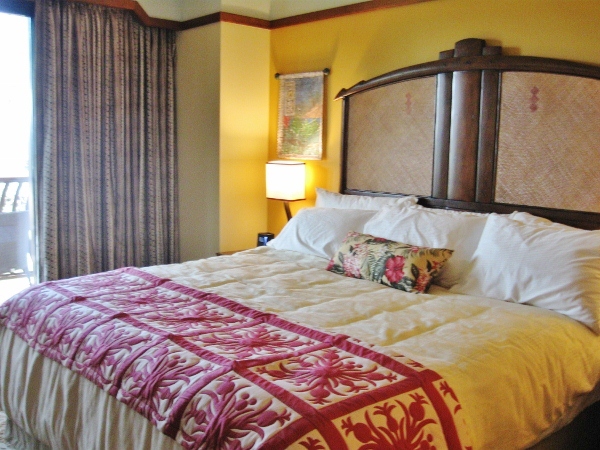 On particular item that will be of interest to bathroom snobs is the presence of two shower heads – one being a rainforest head…  in ALL of the villas, not just the one and two-bedroom units. 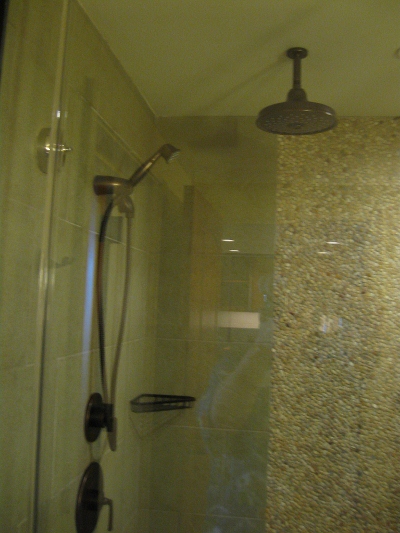 And of course, in the one and two-bedroom villas, they made sure to add the favorite view of the Master Bedroom – the Jacuzzi tub that can view the ocean…. 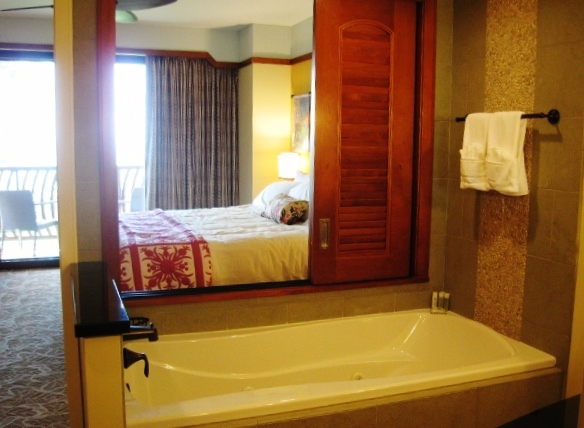 Now, let’s talk about that lanai, or balcony that you will have.  They are certainly spacious enough for a lovely cup of coffee or tea in the morning. 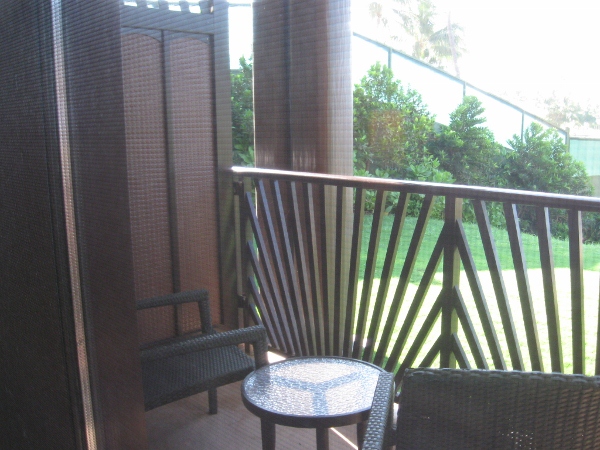 While there is no guarantee that you will have the most perfect or pristine ocean view, I think the fact that you will see this at some point in your trip will make the whole experience of visiting Aulani worthwhile!!!! 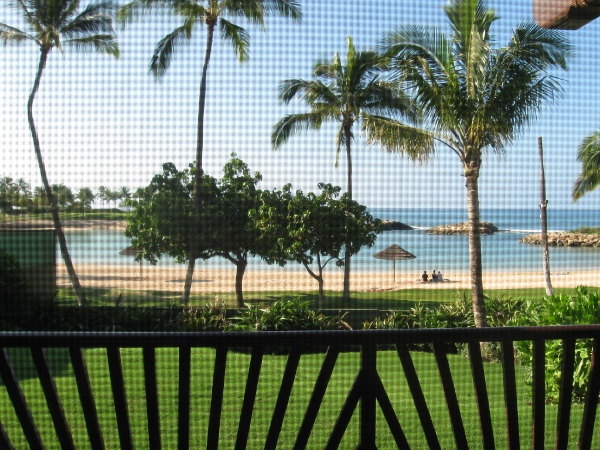 Thanks for touring the most recent images of Aulani with me and maybe I’ll see you on the beach at Kolola!