Have a Wall! Fun at Disney California Adventure!

Wally, Wally Wally, get your construction here!  Oh – my bad.  Schoolhouse Rock is playing on my mental jukebox now…. 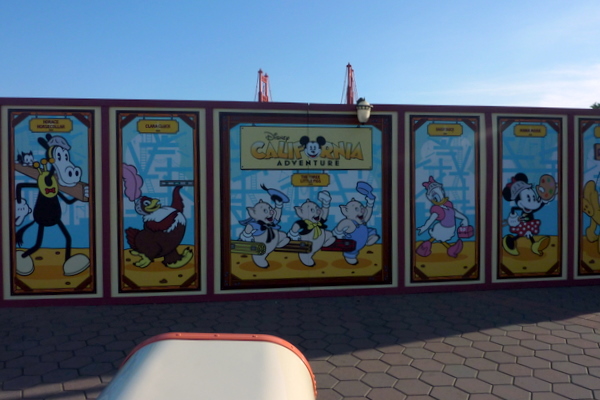 The little beauty in the photo above is the wall that currently disguises the construction area for the new entrance to the park.  The images (clockwise from top left) show the new “hub” of Carthay Circle, an overhead of the new Buena Vista Street – named for the current Burbank home of the Walt Disney Studios,  the majestic Carthay Circle Theater, the new street, complete with Red Line Trolley, and finally the new entrance to the park. 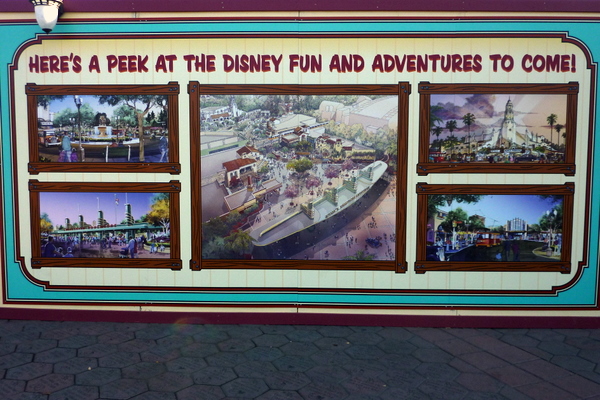 Here’s an enlarged version of the new Buena Vista entrance…

Once inside the park, you reach the second major wall, which surrounds the construction zone for the forthcoming Carthay Circle Theater.   I love the unique twist that the Imagineers have come up with to bring the new features of Buena Vista Street to life.

What make this wall unique is the fact that it is comprised of a variety of 1920’s style advertisements for some of the local businesses coming to Buena Vista Street.  If you do a little research, you’ll find that the other minor advertisements have quite the history to them.

Therefore, the new Carthay Circle Theater receives a nod from a poster for showing its most notable feature! 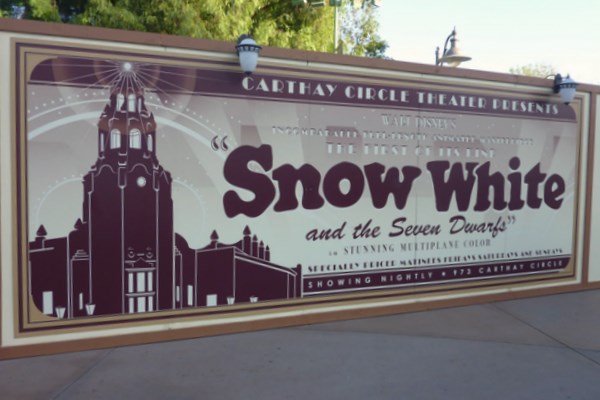 The next several posters are for shops coming to Buena Vista Street. 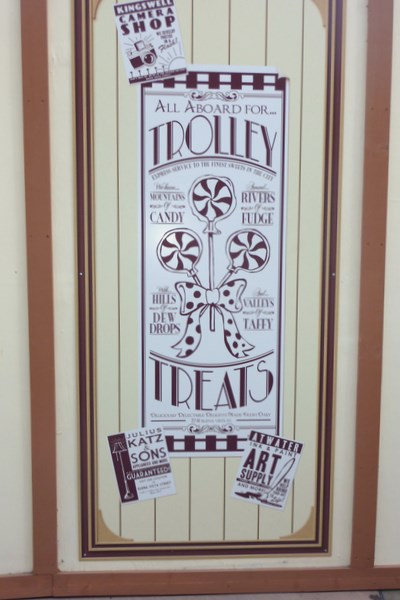 Here’s another for Oswald’s Filling Station – which will be on the left as you enter the new gates.  Oswald is a reference to one of Walt’s most famous original characters – Oswald the Lucky Rabbit! 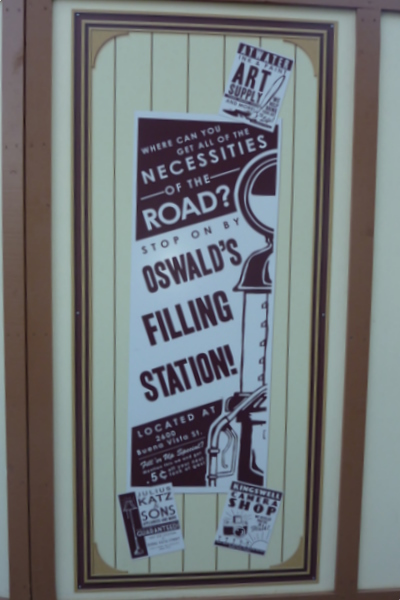 And another for Clarabelle’s Ice Cream Parlor… 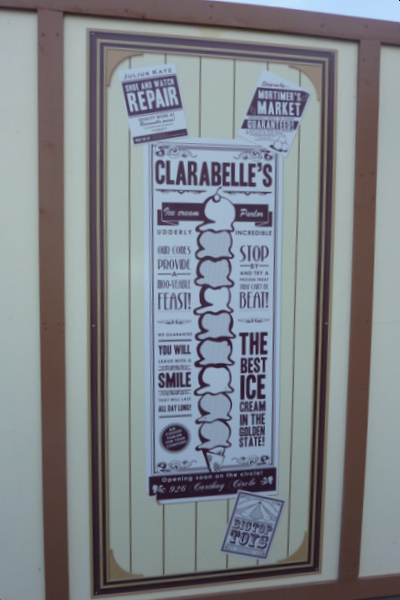 and one for the Fiddler, Fifer, and Practical Cafe.  These two eateries will be located in the same area as the existing Bur-r-rbank Ice Cream and the Bakersfield Bakery. 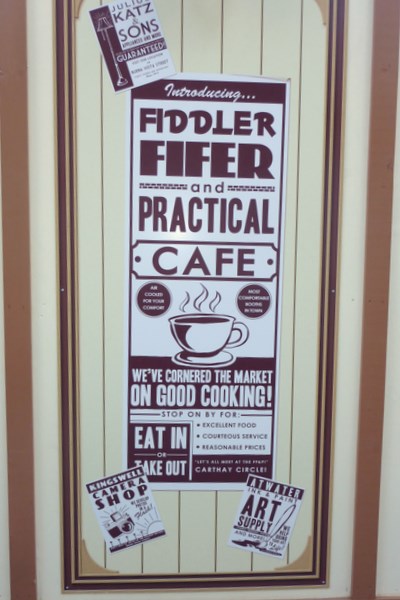 The next advertisements show the shops that will be taking up residence in the current Greetings From California location.

First up is the Los Feliz Five and Dime.  Los Feliz is the Los Angeles neighborhood where Walt first owned a home.  It is found in the hills, on the Hollywood side of Griffith Park and is the exit on Interstate 5, where Walt could go west to access the neighborhoods of the old Hyperion and Kingswell Street Studios, as well as east, to his favorite restaurant in the Atwater neighborhood.  (Did you notice those names in the small ads?  Hmmmm…)

Julius Katz (currently the very non-Disney hero of a series of modern detective novels) continues the references to Walt’s early creations.  Julius the Cat was one of the animated stars of Walt’s earliest claim to fame – The Alice Comedies.  Julius Katz and Sons will be under the monorail, next to Atwater Art Supply!

Kingswell Camera Shop is a reference to Walt’s first Los Angeles studio, so that could possibly be a new name for the PhotoPass stand. 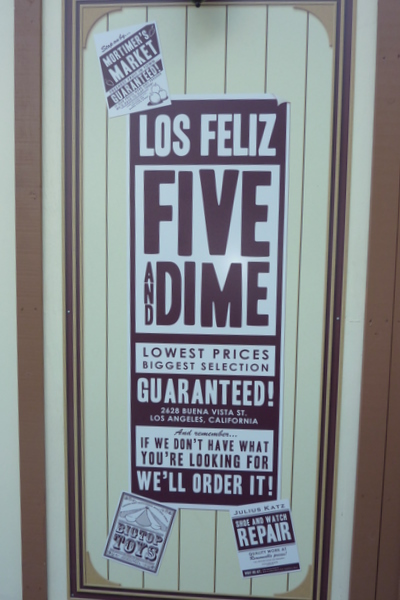 The small ad for Big Top Toys indicates another shop moving into the same section of the street.

The final poster is for the largest of the storefronts – Elias & Company Department Store.   Trivia buffs know the obvious reference here, but I’ll say it anyway – Elias was Walt Disney’s father, as well as his middle name. 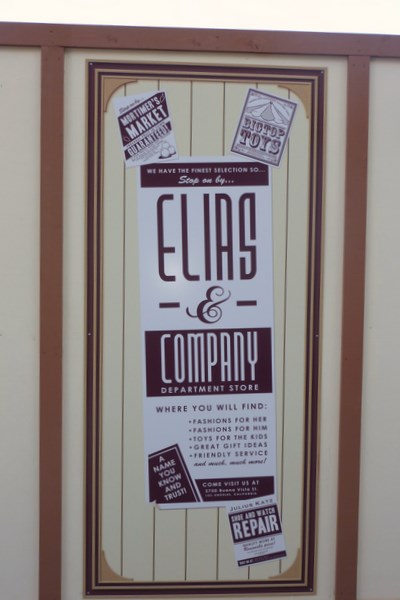 Mortimer’s Market, with it’s “freshest fruit”, sounds like it is a possible fruit cart/grab and go snack location.  Mortimer was the name of a slick mouse who also vied for Minnie’s affections.

Well, that is pretty much it for the fun facts I have for you now.  Hopefully now that you’ve taken a peek at some of the hidden meanings in the artwork that graces the walls of California Adventure, you won’t mind them quite as much!