I thought it was time again to take the trip up to the top of Mickey’s Fun Wheel of Death (okay, just Mickey’s Fun Wheel to folks who don’t have height issues) to bring you our first 2011 update on the continuing construction at Disney California Adventure.   I consider this a small, personal sacrifice to give you guys some awesome views of what is going on.    Keep in mind that the aerial photos were taken from a red, stationary gondola, on January 29, 2011, so things will even be farther along, when you have your visit! 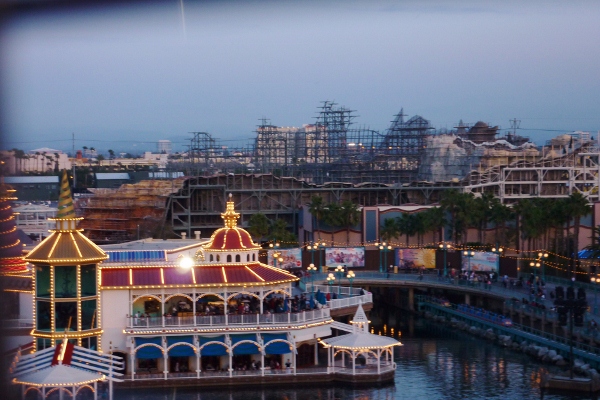 The construction is noticeable from the time you enter the park, so I want to stop there for just a few seconds and show you what is happening down there, before we hit the air.

They are currently working to build the new (and temporary) park entrance, so you need to walk around a few walls to enter the turnstiles.  Once you get there, you will go under the Golden Gate Bridge and take a look.  It’s pretty vacant, except for a few walls and this… 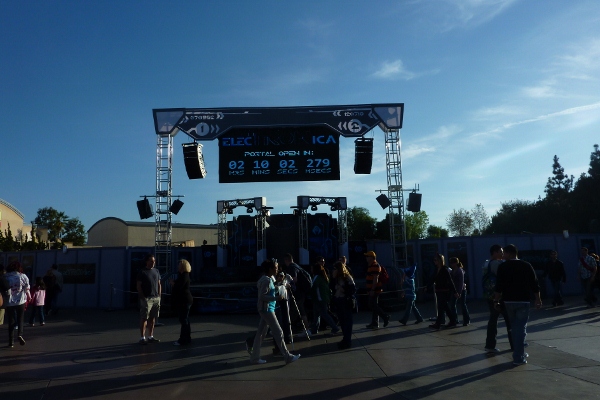 The Electronica Countdown stage – which will be around through April.  Not exciting, but alas – this construction area has just finished its demolition phase.  The Radiant Sun and its fountain are now officially a memory.  I’ll be excited when I start seeing the bones of the Carthay Circle Theater growing up from behind that stage, since I lived in that neighborhood when I first moved to Los Angeles.

If you turn around and look behind you – toward the entrance, this is your view… 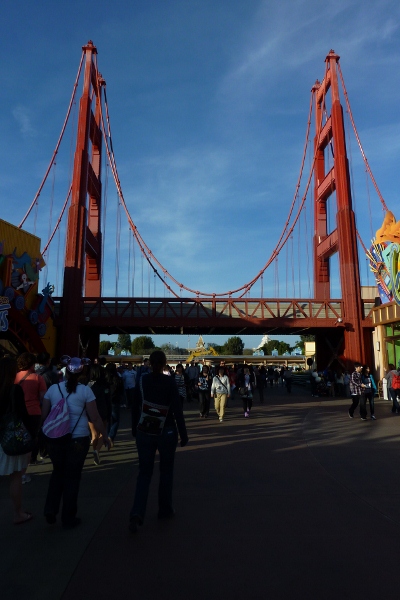 The Golden Gate Bridge will be leaving in the near future, but most notably – it’s barren in the front.  Somewhat of a tan wasteland with that beautiful tile mural of the mountains removed.  Cool thing is that we won’t be looking at it for long, once the alternate entrance opens up.

Now that I’ve completely depressed you, let’s head toward Mickey’s Fun Wheel and start brightening up this story!

I stopped off at the Blue Sky Cellar and found this little map of the Car’s Land main drag – from directly opposite the actual location.  Therefore, I did a little “You are Here →” photography for you with the next two photos.  The actual location is in the top photo, with the map below – just how you would see it if standing there. 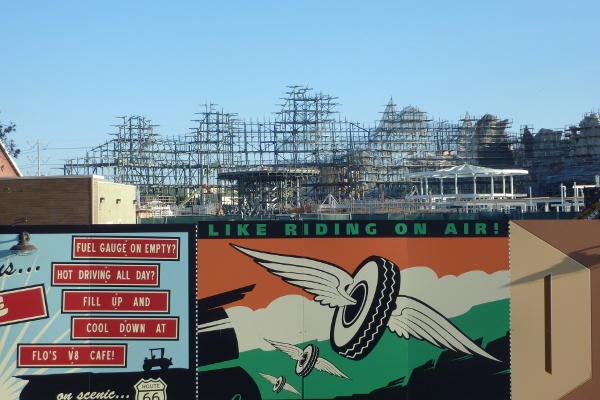 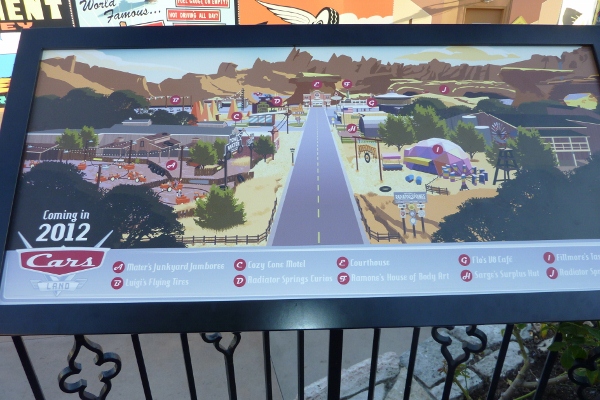 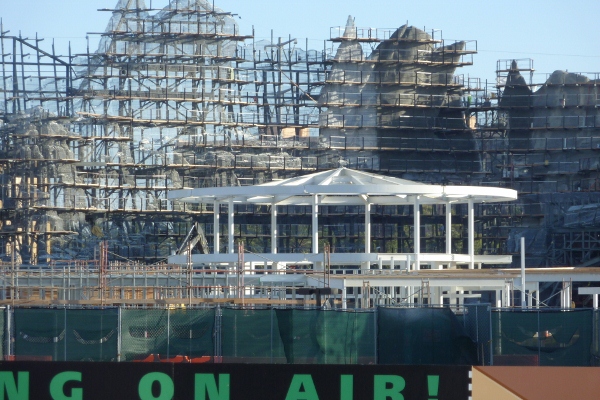 Now that we’ve seen it from the ground, let’s head up into the sky! 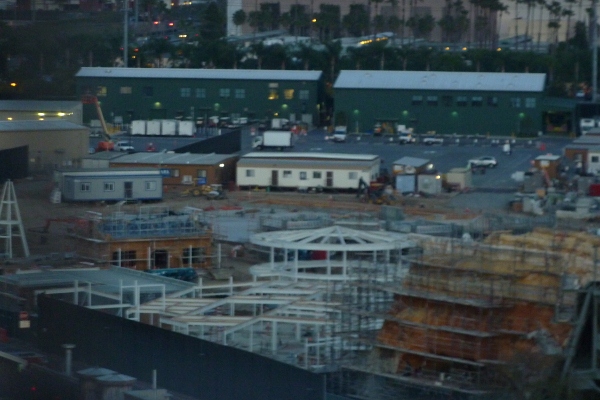 That circular area looks like they have the foundations for either the JunkYard Jamboree or Luigi’s Flying Tires in place.  Can’t completely tell with all of the construction trailers in place.

Let’s look over to the south… 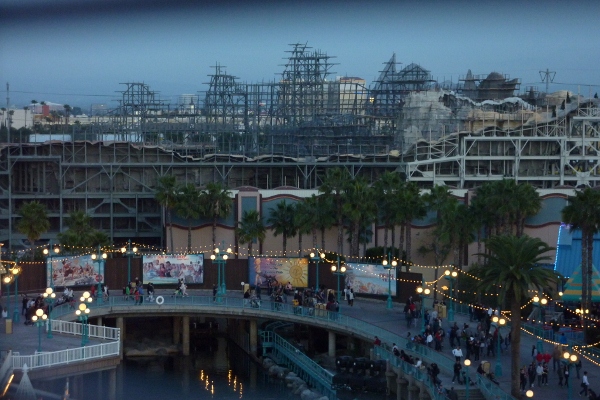 The rockwork that makes up the backdrop to the Radiator Springs Racers is taking shape quite nicely.  If you check out our upcoming blog on the new Blue Sky Cellar exhibits, you can catch a glimpse of the ride testing in progress!

Now let’s move on to the two projects that will be coming sooner than you think!

First stop – The Little Mermaid.  Due to open in Spring of 2011 (keep watching for the actual date…), the exterior of the building is getting close to being completed.  They’ve already started working on the interior sets and installing the vehicles! 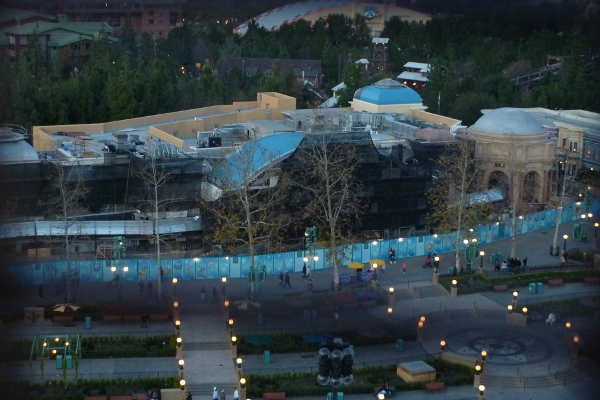 I love the brilliant color of the building – especially here at dusk.  I think it will be a beautiful backdrop to Paradise Park.

Last but not least, turn your eyes to the corner of the park and the retheming that is going on there.  Soon to come are new eateries, as well as Goofy’s Sky School.

Let’s talk eateries first.  According to the Blue Sky Cellar, the new area promises Boardwalk Pizza and Pasta and the Paradise Garden Grill – all in an outdoor garden atmosphere that kind of reminds me of the LA Farmer’s Market.  This is all going into the old Pizza O Mow Mow and Burger Invasion area. 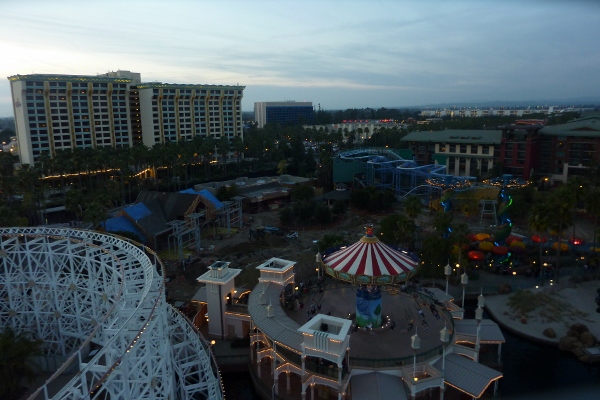 That squiggly blue coaster in the background is the old Mullholland Madness coaster.  (Yes – I, too, see the similarity between that one and a stripped down Primevial Whirl in Animal Kingdom at Walt Disney World…)

Let’s look at it closer, with its shiny new blue coat of paint… 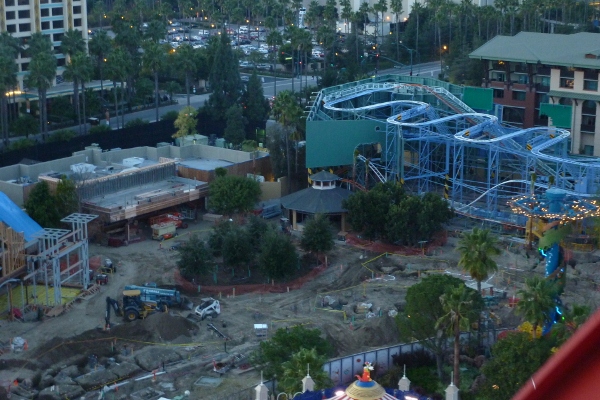 This coaster is being transformed into Goofy’s Sky School – a story that is quite similar to the old Barnstormer from Walt Disney World’s Magic Kingdom.   There will even be chickens….

On that note, I’m going to leave you pondering the fun we’ll have over the course of the year – keeping you updated with all of the progress. Thanks for peeking over the fence with me!

Punxsutawney Phil Spotted at Universal Orlando
Magic Kingdom and Disneyland in One Day!