Following the Christening Ceremony on Wednesday, January 19th, the Disney Dream sailed away to Disney’s private island in the Bahamas: Castaway Cay.  Continue after the break for a selection of sights and sounds from the Disney Dream.  Sounds?  Yes, sounds. Well sort of… 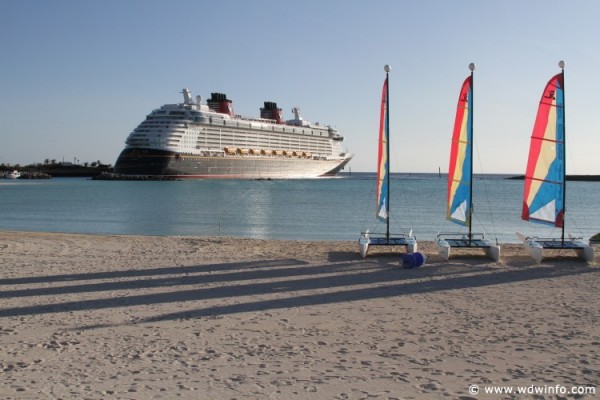 Dinner that first evening was in the redesigned, upscale signature restaurant Palo.  New to the Disney Dream’s version and adjacent to the restaurant is the Meridian Bar, where guests can enjoy drinks before or after their fine dining experience. 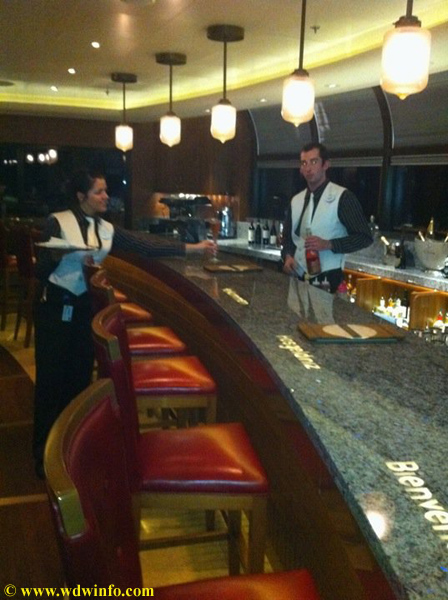 Unlike other meals DIS Team members have enjoyed at Palo on the Disney Magic or Wonder, during the Christening Cruise of the Dream they were seated next to actor John Stamos joined shortly by host of The View, Whoopi Goldberg. 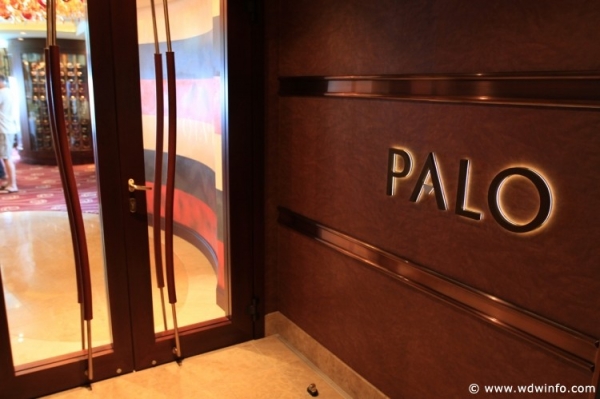 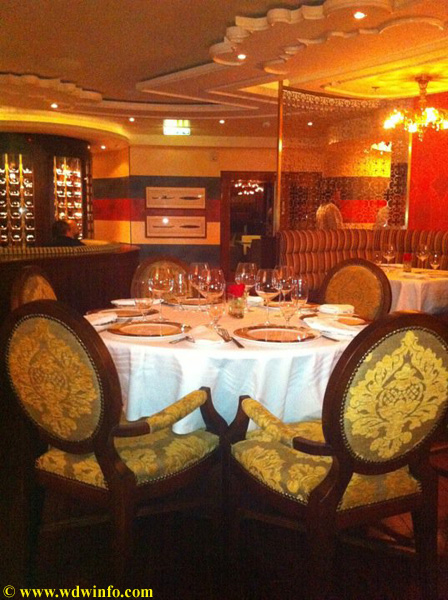 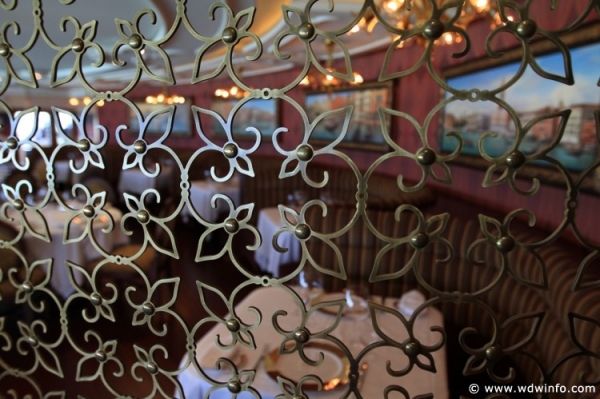 New restaurants in the dining rotation also include: The Royal Palace – heavily themed to Cinderella. 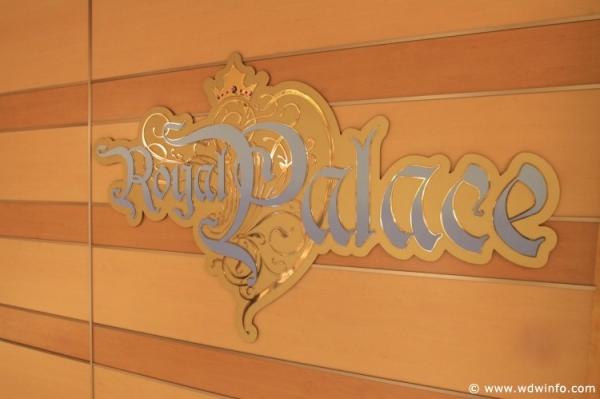 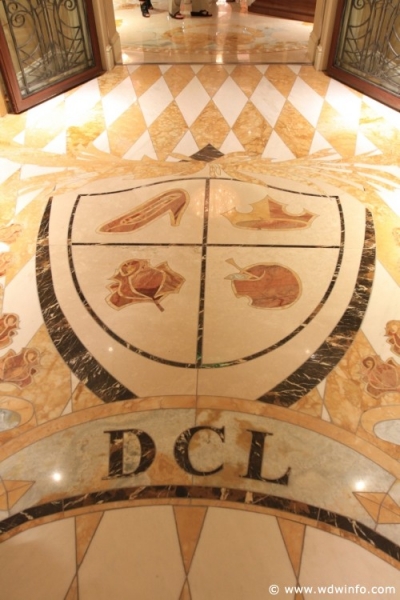 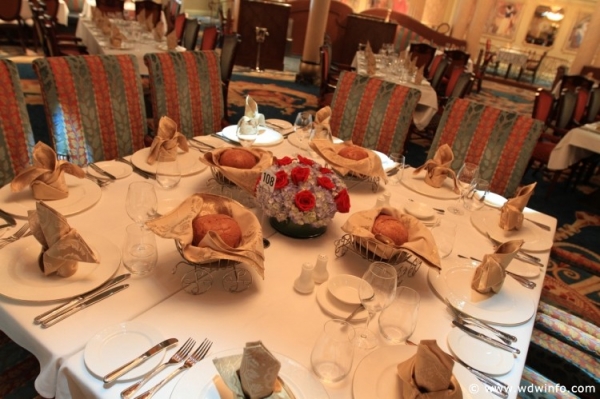 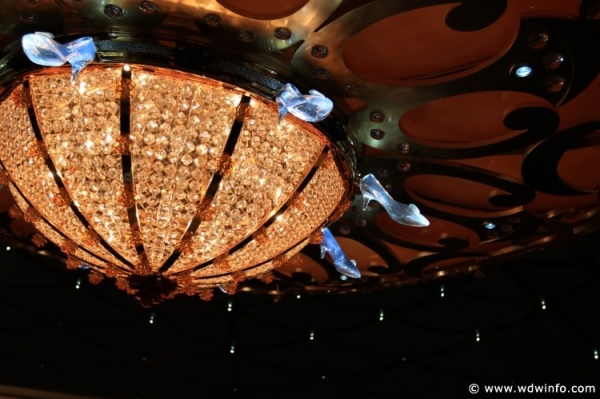 Another new restaurant in the dining rotation is “The Enchanted Garden“, a venue that changes from day to night over the course of your meal. 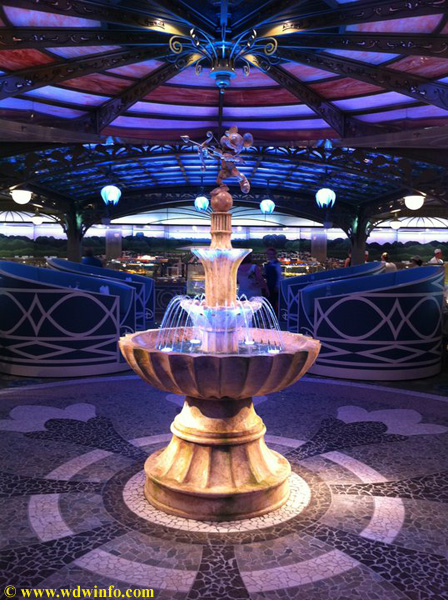 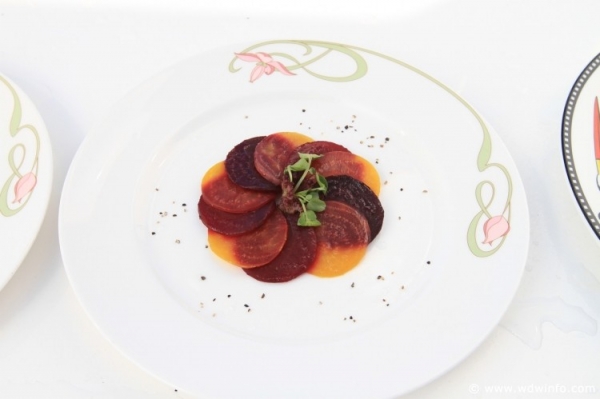 For photos of all the dining spaces (and some of the food) on the Disney Dream including: Animator’s Palate, Royal Palace, Enchanted Garden, Palo, Remy, Cabanas, and Flo’s Cafe, click here.

En route to Castaway Cay Wednesday evening, there was time to explore different aspects of the ship.  “The District” is an adults only entertainment area made up of different bars, lounges, and clubs.  The first area is the “District Lounge” containing a full service bar and live piano music. 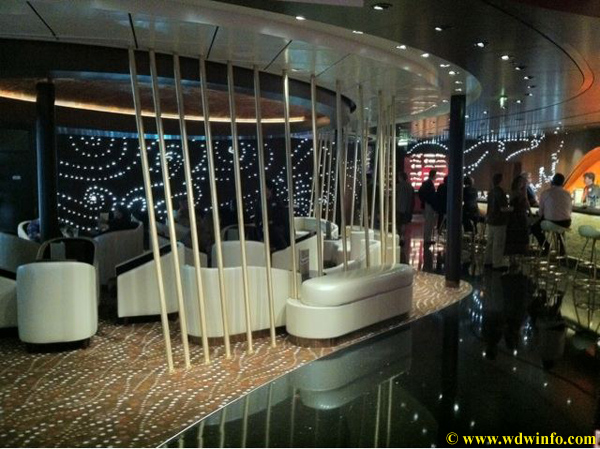 “687” is a sports bar named after the block number of the ship.  687 was the vessel number assigned to the Dream in the Meyer-Werft shipyard, and stamped on every block, every piece of steel used to build the ship.  Here you can find a variety of beers, wine, and cocktails, and a large number of high definition, flat screen TVs to watch live sporting events. 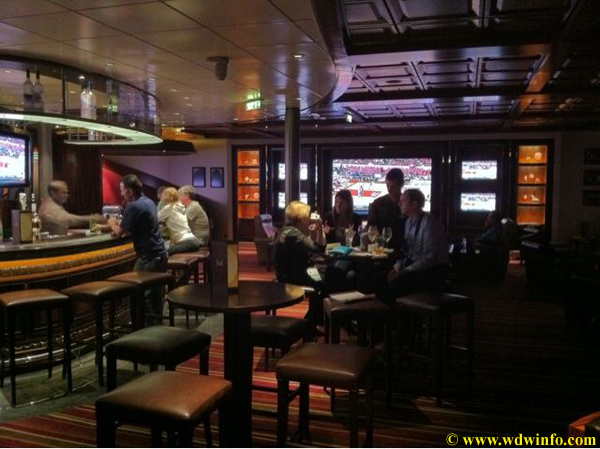 “Skyline” is a club with a rotating backdrop containing scenes of the Hong Kong, Paris, Rio de Janeiro, New York and Chicago skylines. 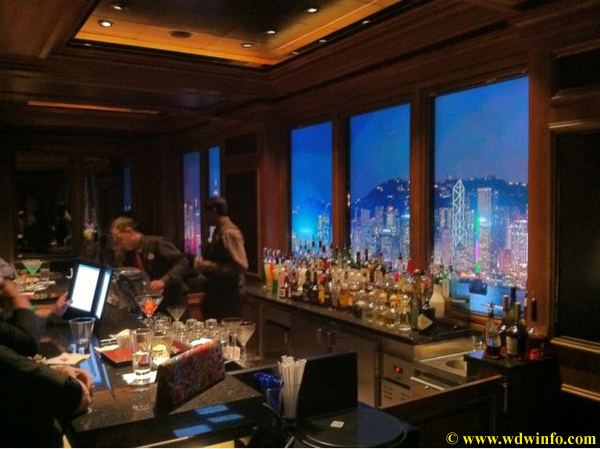 “Pink” is the upscale cocktail lounge in the District.  The name is meant to represent bubbly champagne and is inspired by the pink elephants in Dumbo dancing in bubbles. 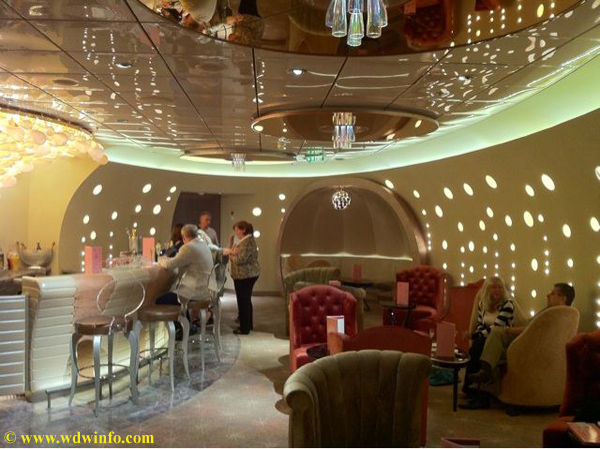 The signature club in The District is “Evolution” – an ultra-modern dance lounge where adults can see cabaret and comedy acts, attend dance parties, and other live performances.  The name is in reference to the metamorphosis of caterpillar to butterfly, and the butterfly motif continues throughout the space. 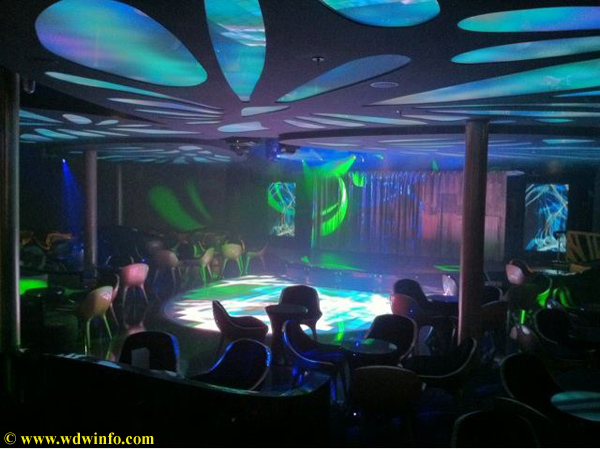 More photos of The District can be found here.

Once the Dream docked at Castaway Cay, there was time to try out the Aquaduck watercoaster, one of the signature features of the new ship.  Below is a point of view video illustrating the ride.

Following the ride on the Aquaduck, more areas of the Dream could be explored. 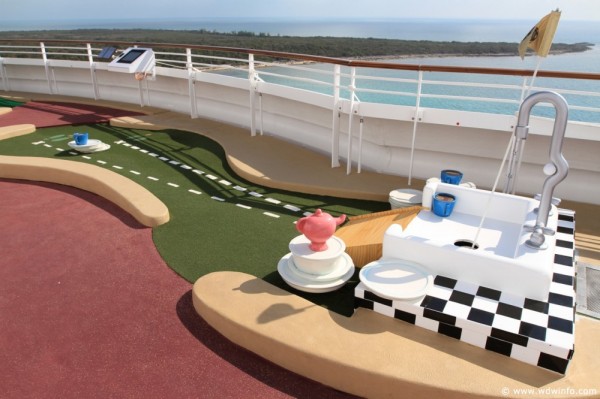 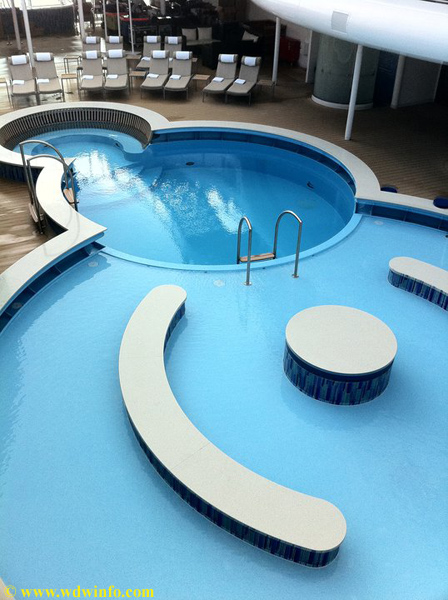 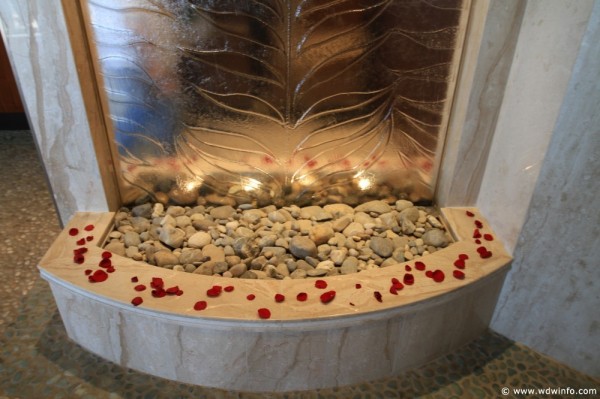 Some of the spaces on the Dream are familiar, and yet different, altered, and improved.

The art deco styled Walt Disney Theatre seats over 1300 guests, spans 3 decks, and includes orchestra and balcony seating along with opera boxes.  The theatre is equipped with modern technology to showcase Disney stories with Broadway-style effects. 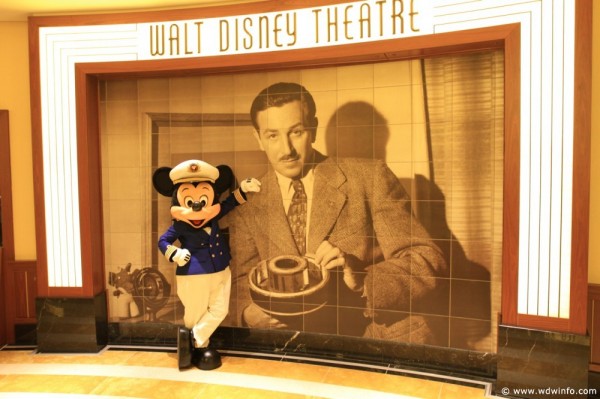 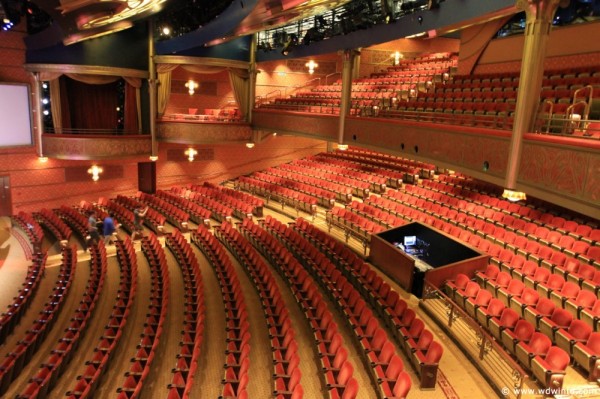 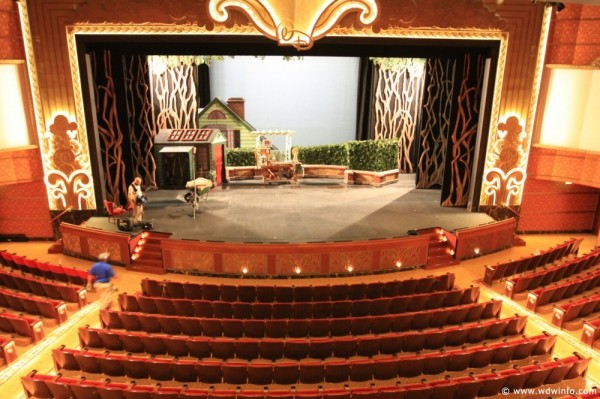 The headliner performance in the theatre is “Disney’s Believe”, and the DIS Team reports the show is not to be missed. 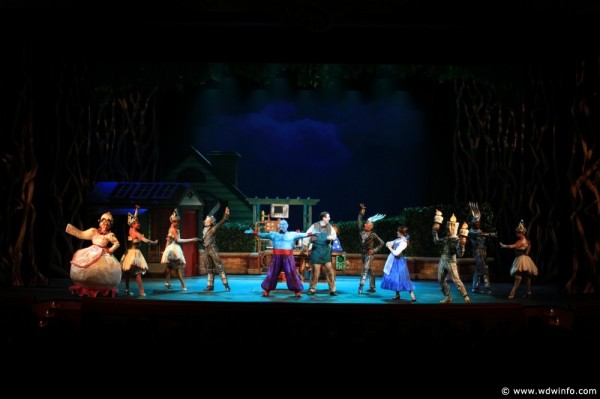 The nearly 400 seat Buena Vista Theatre shows first-run movies, including films in Disney Digital 3D, throughout the day from morning to night. 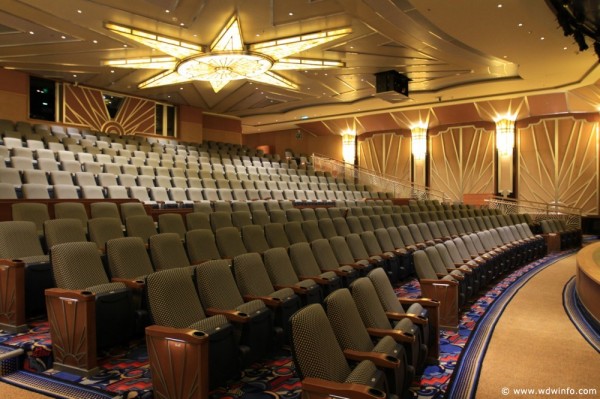 A favorite restaurant on the Wonder and the Magic is Animator’s Palate.  This interactive show dinner changes from black and white to the Wonderful World of Color right before your eyes.  The restaurant returns on the Dream, but is plussed with video monitors that act as windows to the undersea world. 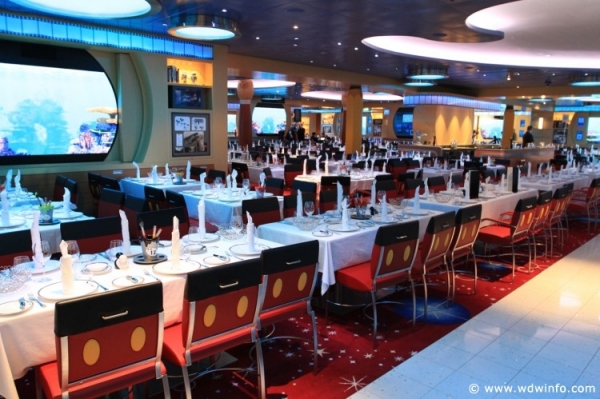 The star of the show is the sea turtle Crush from “Finding Nemo” who swims from window to window chatting with guests ala Epcot’s “Turtle Talk with Crush.” 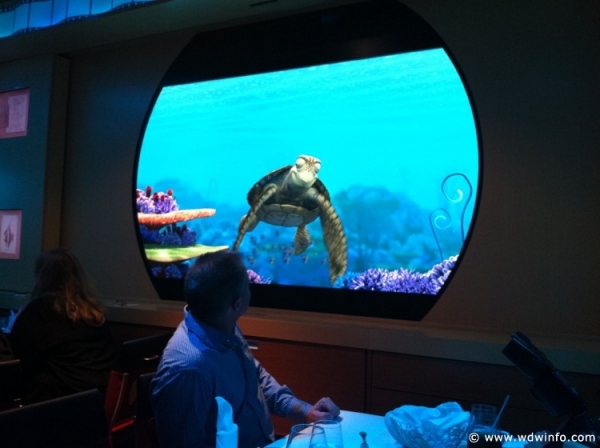 Now for the sounds mentioned at the beginning.  Once everyone was back on the ship from Castaway Cay, the Cruise Director announced that the Disney Dream would play all melodies on the ship’s horn. 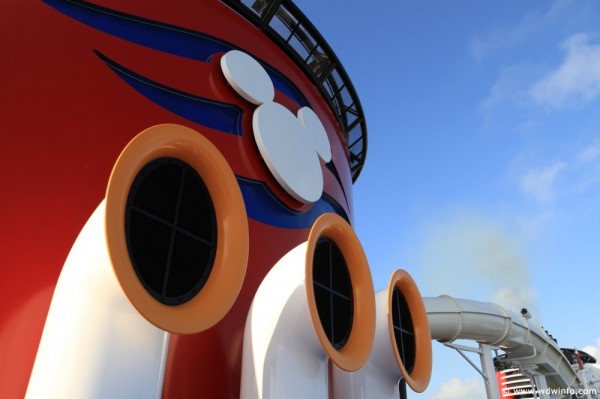 The melodies included classic Disney songs such as:

The short preview cruise was capped by the “Buccaneer Blast” – Disney’s fireworks extravaganza at sea. 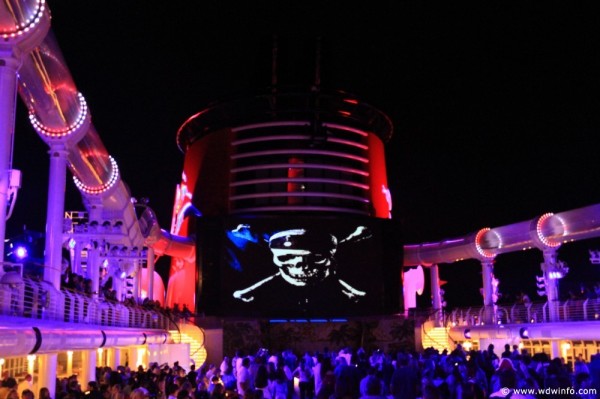 Disney boasts they are the only cruise line to feature this type of fireworks show. 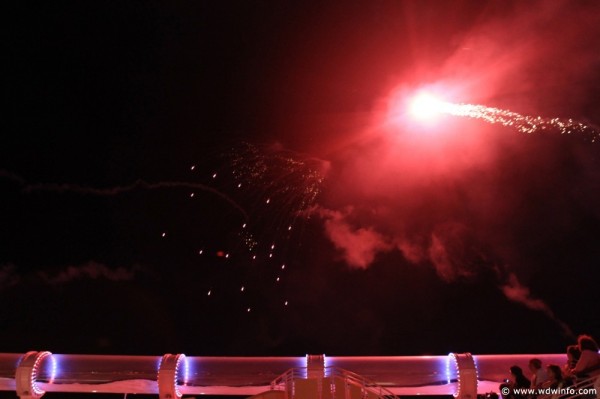 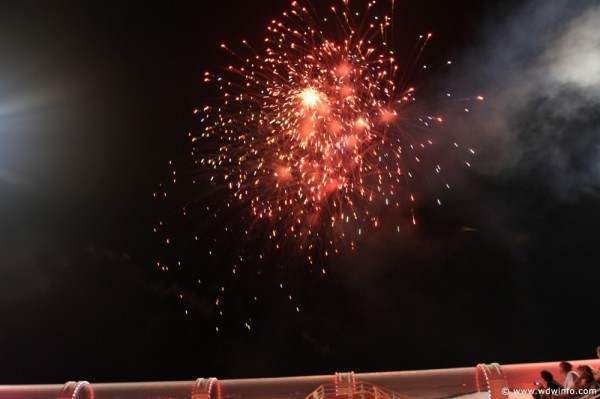 And with the conclusion of the fireworks show, it was time for the Disney Dream to steam back to its Port Canaveral home.  The all-too-short preview cruise had come to an end, and it was time for the media members to disembark and make way for paying guests.

Let the Memories Begin! starts at Walt Disney World
The Toys Are Back! Best Picture Nomination for Toy Story 3