Construction rolls on for the stand alone Disney Vacation Club property Aulani in the Ko Olina resort area of Oahu, Hawaii.  Back in August, the 53 contestants for the Miss America pageant visited the Magic Kingdom, and during the visit Disney asked Jalee Fuseller, the current Miss Hawaii, her thoughts regarding the coming resort and spa.  After the break is Disney’s video where Miss Fuseller shares her excitement for Aulani. 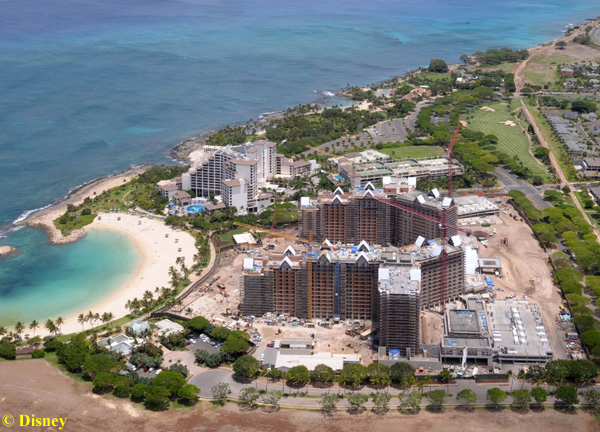 Miss Hawaii is a great spokesperson for Disney, Hawaii, and Aulani.  She describes her island state as “one big ‘Ohana”, and says she’s glad Imagineers are working to capture the true Hawaii and not just a stereotype.

Aulani is scheduled to open August 29, 2011 on 21 acres of oceanfront property in western Oahu.  The resort and spa will feature two 15-floor towers, extensive pools and garden areas, two restaurants, access to a 9-acre lagoon, and an 18-hole golf course.  Reservations are currently open for hotel and vacation packages.

Are you excited about this new Disney resort in Hawaii?  Will you be planning a trip to visit the resort anytime soon?  Log in with your DISboards username and password to leave a comment below.

Celebrate the end of Celebrate!
Disneyland Gems: Holidays at Disneyland!