Welcome back to Part 2 of my continuing series, The New Disney Store.  Like I said – I’m taking you guys on a journey with this one.    Today, I want to give you the opportunity to listen to Jon Endicott, Director of Global Design and Construction for The Disney Stores.    Jon sat down with me to talk about the creative process that inspired the design of the new stores.  As Jim Fielding said in my last interview blog – The New Disney Store Part 1, all Disney Stores (worldwide) will be receiving this makeover!  Join me as I continue to learn more about  the Making of The New Disney Store! 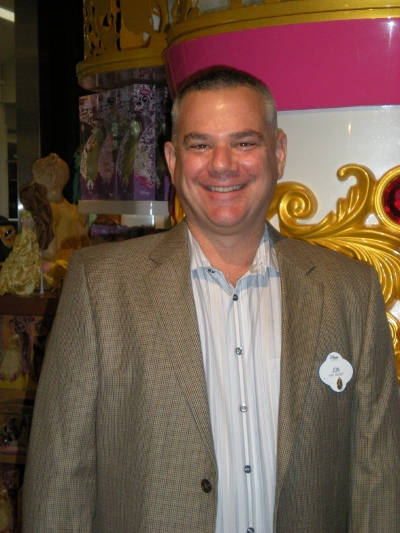 Jon started out with the Disney Stores in 1994 – the year of The Lion King, when he said they had a lot going on in terms of color, activity, etc.  You knew you were at Disney, but the store tended to overwhelm the product they sold.  It was hard to really distinguish the newness of the products.  Then, in 2001, they went the opposite direction and made it almost not “Disney enough”.   The new stores are designed to be a flexible and happy medium between the two extremes and John was kind enough to discuss that with us, along with several other facets of design.  He even gives us a sneak preview of the highly anticipated New York City Times Square store and some of the challenges they faced.

Join me now, and listen to Jon discuss his passion.  I want you to hear his own words about the aspects of design, so I’m not going to transcribe it in detail.

1. Click here to listen to the Director of Global Design

If you would like further information and photographs, please make sure to check out my story on the opening of the Montebello, CA store by clicking here, as well as my interview with Disney Stores President, Jim Fielding – click here.

Here are some of the highlights of Jon’s conversation.

The key element to the Store is the design and purpose of the Pixie Dust Trail, as seen below.   The path really does sparkle, as it guides you through the store! 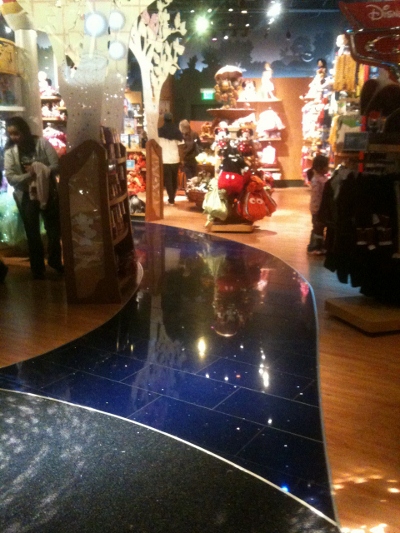 We also talked a little more about the Projection Trees.  The one below has a hint of Buzz Lightyear in it! 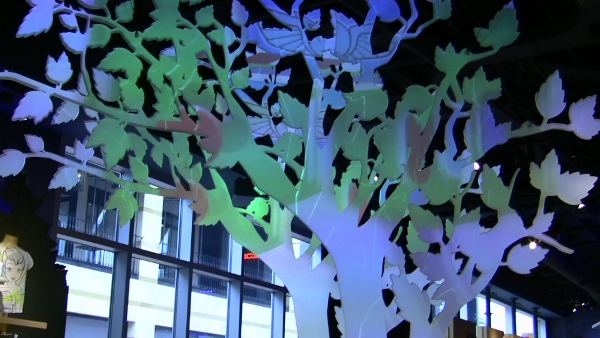 We spoke about the “Storytelling Neighborhood” concept and what they call “The Hero Fixtures” – which are the principal design fixtures for each neighborhood, such as the Castle and its Magic Mirror. 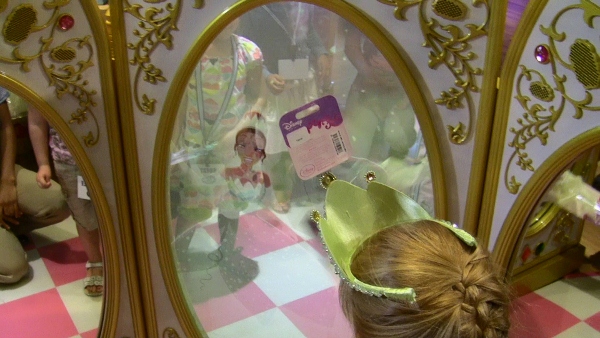 We also discussed how even standard retail fixtures can be part of the story due to the detail in their design – such as the inspiring quotes on the fixture shown below. 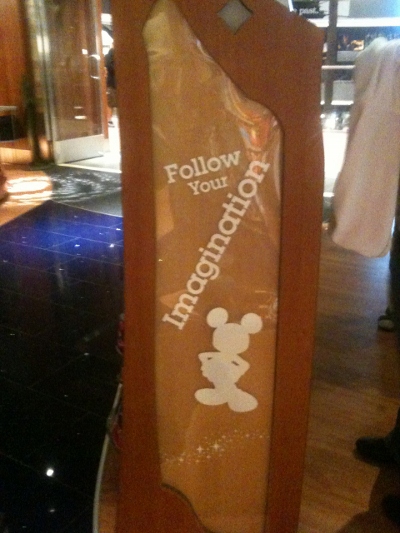 We discussed how the Skyline (the decorative wall border up above the tops of the wall fixtures) helps to add to the storyline of the “Neighborhoods”, such as the castle above the Pre-school Neighborhood shown below.  The buildings in the skyline are the homes of some of your favorite characters.  Subtle, yet a classic way of setting the scene. 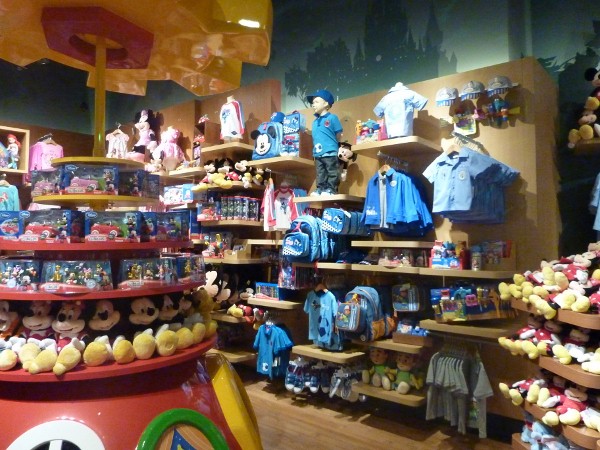 We also discussed the tone of the fixtures themselves.  The Plush Fountain is a great example of what Jon describes as allowing the product to tell the story, by displaying the characters in neutral tones.  You can see that contrast in the photo below, where the actual plush product on the second tier (and even on the wall in the photo background) “pops” into your vision, while the sculptural Mickey and Minnie are muted. 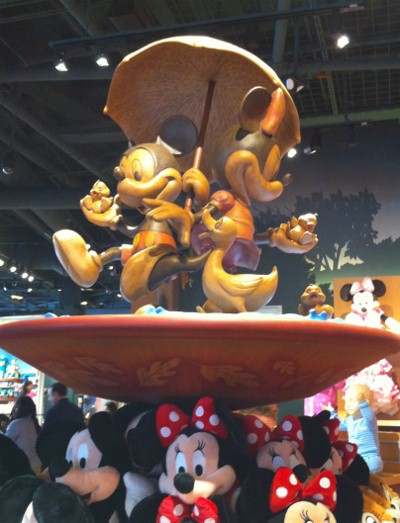 Jon impressed upon me how critical the Theater is to the design as the gathering place of the store.  Not only do its outer walls serve as a feature product display zone…. 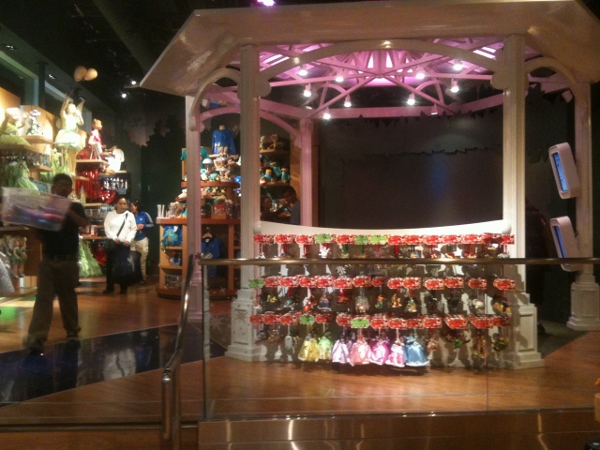 but it’s the community heart of the store.  The interior allows guests to gather for events, such as the “Build a Perry the Platypus Inaction Figure” event we attended in the photo below. 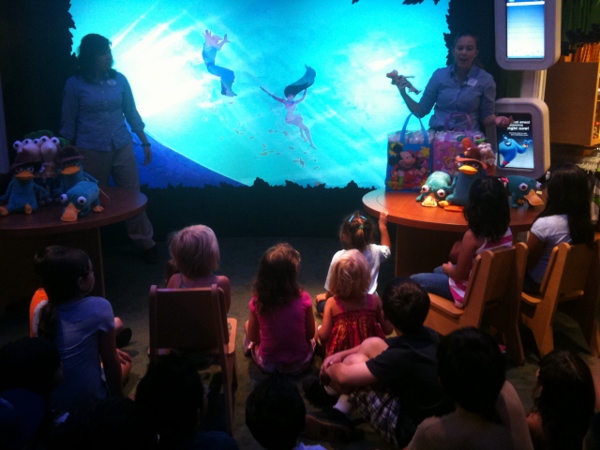 One of the things I really enjoyed about my conversation with Jon was that we discussed how these elements tie together the new vision of retail that The Disney Stores will be laying out over the next several years.  With the new design, Disney hopes to keep a dynamic and fresh experience for guests and create wonderful memories that will last a lifetime!

What’s New at Disney’s Hollywood Studios?
Rapunzel Lets Her Hair Down in Her New Cottage at Disneyland