As many of you know the first weekend of October 2010 saw the introduction of a new night race at Walt Disney World, the Wine & Dine Half Marathon.  One of the things many runners were looking forward to was the Finish Line Party to be held in Epcot’s World Showcase from 10:30 pm until 3:00 am the following morning. 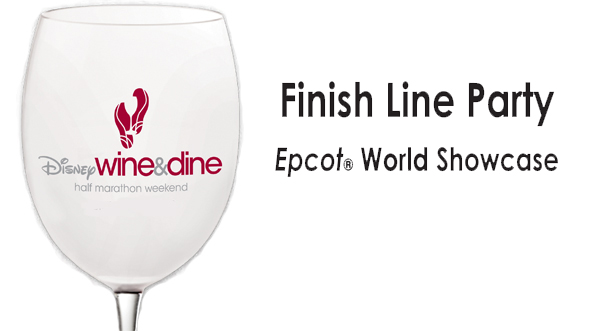 Anyone who ran either the half marathon or the half marathon relay got a wristband that acted as their entry ticket.  Friends and family could order a ticket through RunDisney for admission to the party if they wanted to join in the celebration.  All of the kiosks that were participating in the Food & Wine Festival were opened and the runners who completed either race could chose one free food item and one free drink with a ticket they received at packet pickup.  Anyone could also purchase any of the items the kiosks had for sale.  Two pavilions were opened, Mexico and Norway, and both were running their ride (Gran Fiesta Tour and Maelstrom respectively). 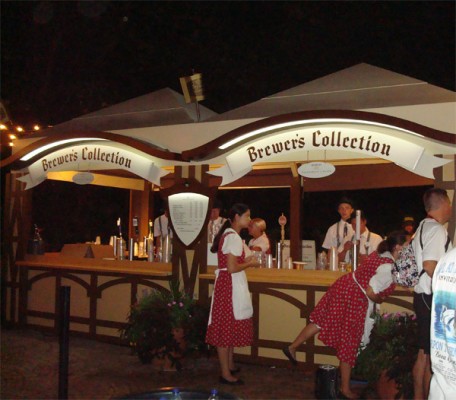 During the Finish Line Party there were also two things going on in the America Gardens Theatre.  Mulch, Sweat, and Shears played at three different times and the award ceremony for the overall winners of the marathon and relay took place there.  The top three overall for the men’s and women’s open division and the first overall for the wheelchair and relay division all received a wine glass, carafe, and embroidered chef’s hat. 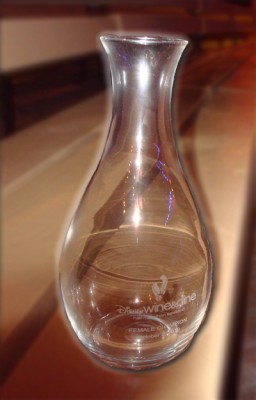 The award winners were:

Unfortunately the party turned out to be very crowded once the bulk of the finishers started coming in.  The finishers emerged from backstage just to the east of the United Kingdom and there was a very large crowd of spectators waiting for them there.  At first, the party had short lines once you got out of that immediate area but as the night progressed the lines at the food kiosks became very long.  The line for most kiosks were easily as long as they were earlier that day when the entire world was allowed in to sample the food.  The lines for the two opened rides didn’t seem to get too long, at least not when I was there.

Another nice thing about the Finish Line Party was it gave the runners an opportunity to get back together with their friends and celebrate (or commiserate) their finishing of the race.  For people who were from the south the weather was quite good for running considering what it could have been, but for the people who came down from the north the heat and humidity took their toll.  There were a lot of finishers who were experiencing some stomach distress of one form or another, way more then I have seen at other races I have done.  I would have to chalk the large number up to not only the weather but, more importantly, the night time start and the fact that Disney lures so many first time runners down for their races.

Just as with the half marathon itself, there were some lessons to be learned here for both RunDisney and the runners themselves.  First, they really have to limit the amount of people who could go to the party.  Anyone finishing near the back of the pack really had very little time to get anything with their “sip and snack” coupon.  Not only did they have the shortened time window because it took them longer to finish but they had to wait a long time for their checked bags (longer then they should have) and the long lines meant they had very little time to actually get the food or drink.  Allowing each runner to bring only one guest is what I would suggest.  The party needs to be more exclusive and a higher percentage of the people there should have to run to earn admission.  They may also want to think about extending the party a little so the runners finishing later have a longer window to enjoy it.  Opening more pavilions, including some in Future World, might also be a good way to disburse some of the crowd.

As for the runners, many of them learned the hard way that whatever their plan was for their first nighttime half marathon it would have to be tweaked.  Maybe they would have to change what they did earlier that day, maybe change what and when they ate, and maybe change the pace at which they run late at night.

Just as with the race some problems are to be expected with first year events and the Finish Line Party was not immune to this.  I am holding out hope that the issues that can be fixed will be for next October.