A new event popped up on the runDisney race calendar this year.  The Inaugural Wine & Dine Half Marathon took place Saturday, October 2, 2010 coinciding with the opening of the 15th Epcot International Food and Wine Festival.  The starting gun fired at   10:00 pm, and competitors wound their way from ESPN Wide World of Sports through Disney’s Animal Kingdom and Hollywood Studios before ending at Epcot where runners were promised an after-party in the World Showcase.  Check out the video after the break for highlights of the unique course. 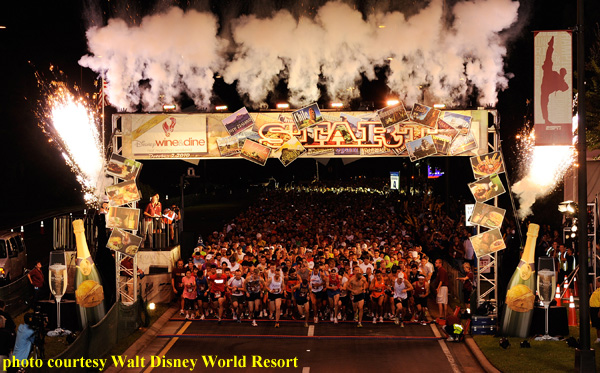 Earlier Saturday morning I ran the Inaugural Mickey’s Halloween 5K with my daughter through the Magic Kingdom, and was therefore attempting a daily double running the half marathon later that night.  The video captures my journey through the race including my favorite sights: a gauntlet of lit “tusks” at the entrance of Animal Kingdom and a sneak peek at the Osborne Family Christmas Light Spectacle on Hollywood Studio’s Streets of America.

For more details on the Wine & Dine Half Marathon, be sure to read Frank Chahulski’s perspective from the front of the pack, and his summary of the after-party where participants sampled the offerings of the Epcot International Food and Wine Festival.

Disclosure: As of December 2009, the Federal Trade Commission requires disclosure of any payments or considerations.  runDisney provided complimentary race entry to the Wine&Dine Half Marathon for Dave Parfitt.