A Behind-the-Scenes, Performer for the Day Experience

When I was in high school, I performed in Epcot with my high school band. As part of that trip all 200+ high school “bandies” took in a show at a dinner theater in Kissimmee. I vividly remember clanking my pewter mug with my band mates cheering on the knights. Fast-forward 25 years… I was in town for the U.S. Travel Association’s International Pow Wow, and representatives from the Orlando area dinner shows attended the media brunch. I met the folks from Arabian Nights (along with one of their horses), and wanted to learn more about this attraction. Executive Vice President Audrey Padgett proposed creating a behind-the-scenes adventure for my girls [Maggie (age 12) and Evie (age 9)] to experience it through their eyes. Continue after the break for the full story complete with video to see how they treated our family like royalty… errr princesses… no, SULTANS of Orlando!

For full disclosure, we did not pay for this “Performer for a Day” experience. Therefore, I will not review the show, but, instead, report on our day. This experience is something Arabian Nights is considering offering, and Audrey wanted to know if our girls would act as guinea pigs to test the concept. Audrey proposed to have the girls receive a stable tour, groom a horse, learn some tricks, have a riding lesson, get dressed in costume and makeup, greet arriving guests, and perform in the opening act of the show. My girls, Maggie and Evie, took approximately 3 seconds to consider Audrey’s proposal before agreeing to it. No, wait… on second thought, I think they agreed to the idea the second I uttered “horses”. 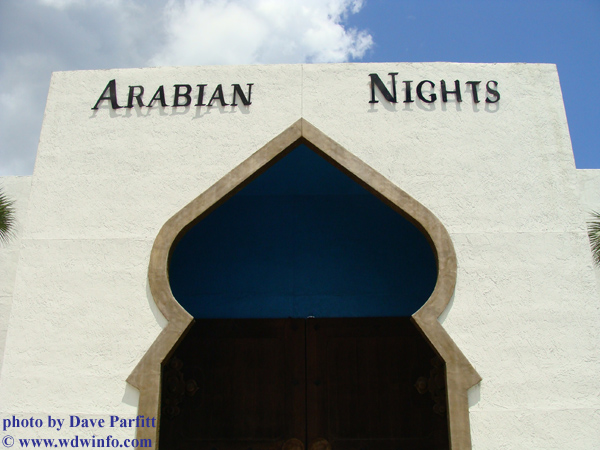 We arrived around 1:30 pm and cowered under the shade of the large wooden entryway to protect ourselves from the unrelenting Florida sun. Audrey fetched our family, ushered us inside the dark, cool, Middle Eastern themed castle, and told about Mark Miller (founder and owner) and the history of Arabian Nights as depicted on large murals painted on the entryway walls. She led us to the costuming shop where the girls were fitted for their evening’s costumes, and then into the arena/dining hall where a fresh, yummy chicken finger lunch was already waiting for us. Audrey wanted to make sure we all had energy for the day’s activities. SCORE! Did I mention Evie is a chicken finger connoisseur (similar to a sommelier – but for chicken fingers)? While we ate lunch, the girls sat on the edge of their seats as Audrey gave an overview of the day. 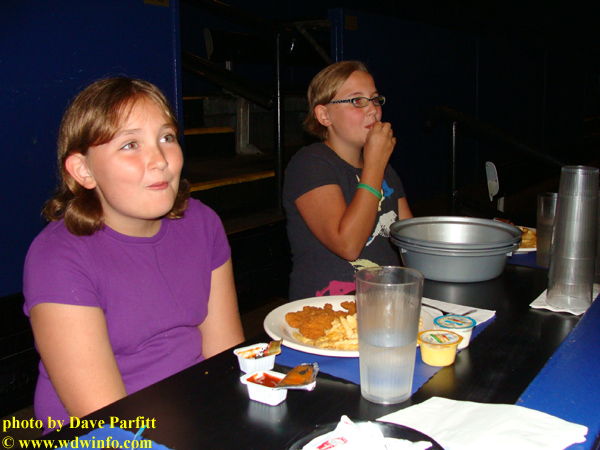 After lunch, barn manager Ashley Fluke gave a stable tour. We saw the 50+ horses kept on property – everything from the smallest Shetland ponies to huge draft horses. Ashley gave tons of insight into everything that goes into maintaining the herd. There’s grooming, care, feeding, health checks, training, and exercise for all the horses every day – in addition to the daily cleaning of the stalls and barn! The horses are rotated through the show so they do not have to perform every night. I was so impressed with how much goes into the behind the scenes aspect of the show, and made me think about how these dinner show productions are so much more than what you see in the arena. I understand why ticket prices for attractions like this are what they are – it’s not just dinner and the 90 min show, it’s everything you don’t see behind the scenes that goes into the care of the horses. As we walked through the barn, you could tell how close Ashley and all the staff were to the horses, there was much affection and praise lavished on every horse we met. 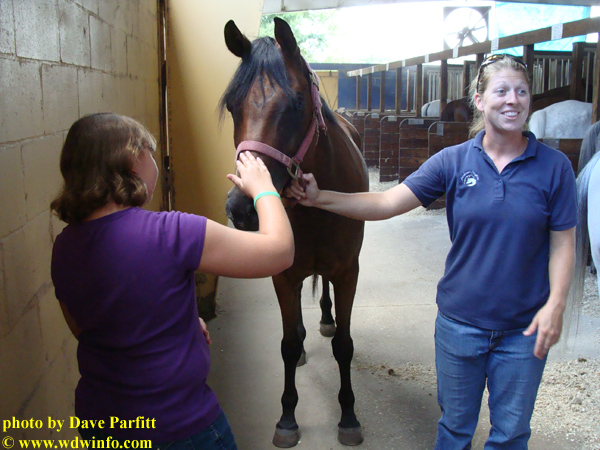 Towards the end of the tour Arabian Nights trick rider Melody McCray joined us, and Maggie and Evie were each assigned their own horse to prepare for the evening’s show. Melody helped Maggie with a white horse named Sailor, and Ashley and Evie worked with a sleek, chestnut horse called Tempt-a-Star (T-Star for short). 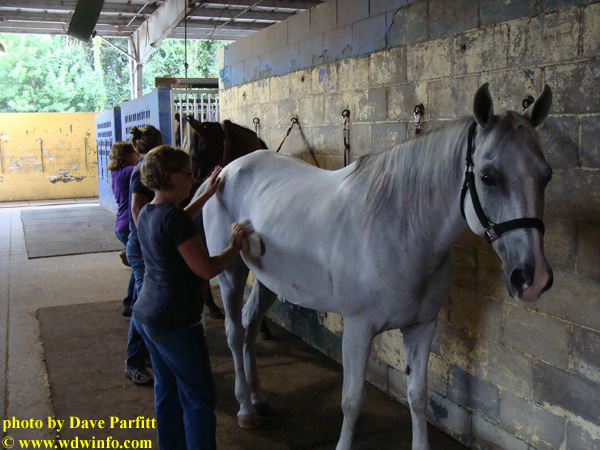 They curried their horses, and delighted in brushing out the tails and manes – just like playing “My Little Pony” except with real horses. Next, Sailor and T-Star received baths, and were shampooed and rinsed. 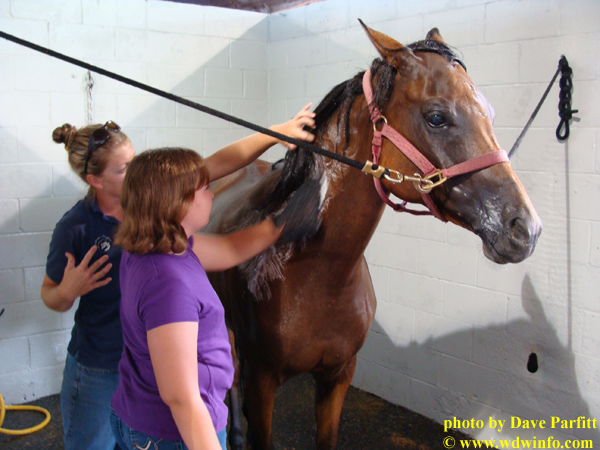 While Sailor and T-Star dried, Maggie and Evie were taught some acrobatics and trick riding in the arena with principal show performer Csaba Szilagyi and Kerry – a large American Cream draft horse. The girls stood in awe of this massive horse wondering exactly what was expected of them – so Melody demonstrated. The blonde rodeo champ climbed up, stretched out on her belly, and with a huge smile proceeded to flip and kick her legs high in the air. Maggie and Evie stood agog, but Csaba and Melody assured they would be safe and comfortable before the horse ever started moving. Evie squeaked, “The horse is going to move!?!” Everyone laughed… everyone but Evie… 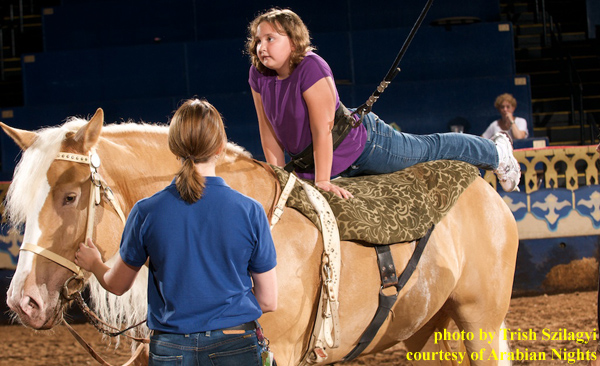 Principal performer Csaba Szilagyi is an interesting fellow; a compact Hungarian born firecracker who came to Arabian Nights in 2003 with no horse experience whatsoever. Instead, Csaba was a circus acrobat, but now his apparatus is horses. Every night he dangles, stands, and flips from their backs, sometimes even jumping through a fiery ring. Csaba was incredibly patient with the girls, and they trusted they were safe under his supervision. 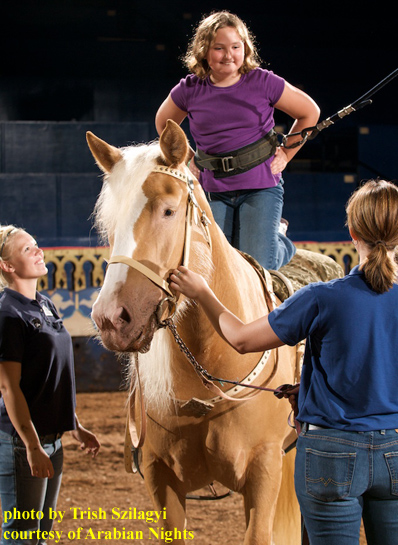 Maggie and Evie each took their turn cautiously mounting Kerry, tenuously lifting their legs in the air, and doing a “cobra” yoga position while Kerry lazily sauntered around the ring. After a couple circuits, Evie had her fill, but Maggie wanted to try more. With Csaba’s help, Maggie stood on Kerry’s back. You would think her face would crack from a smile so large. 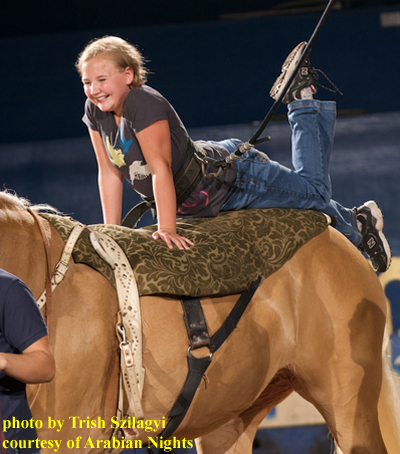 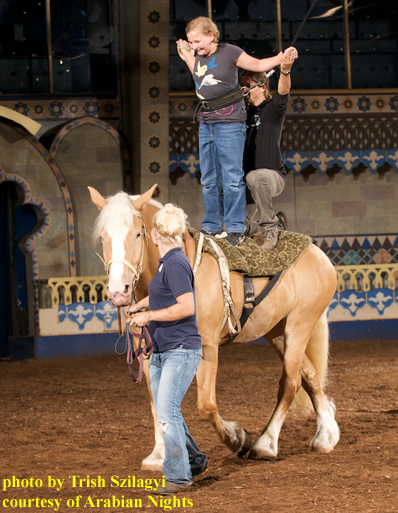 With the acrobatics class over, it was time to attend to Sailor and T-Star, tack them up, and go for a ride. Each horse was dressed with western saddles and led to the arena. 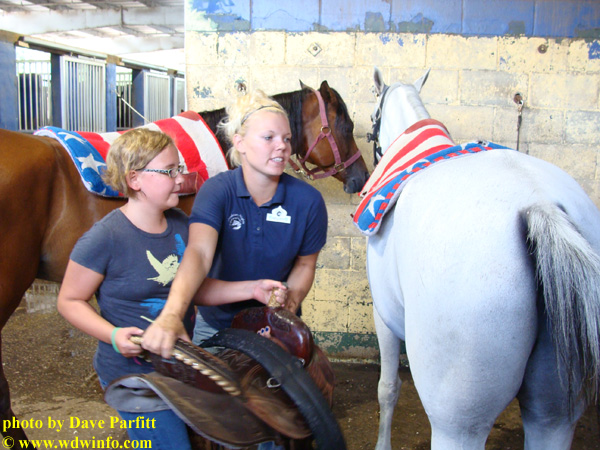 Both girls couldn’t be happier getting to take the horses they groomed earlier out for a ride. The girls were fitted with helmets, helped into the saddle, and taught how to hold the reigns, ride, and turn. After a few laps and turns around the ring, the girls were then shown how to make their horses bow and lie down. 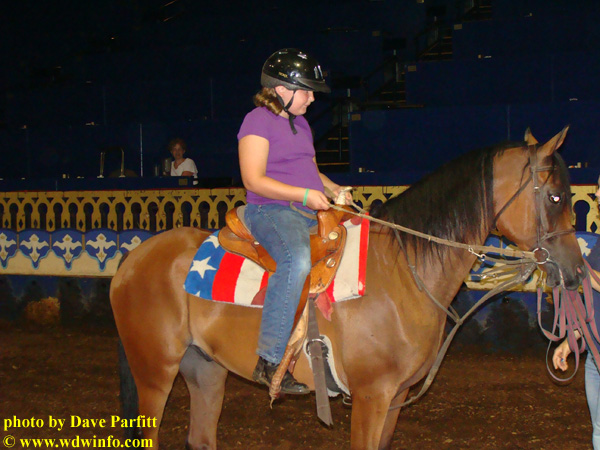 At this point, it was close to 4:00 pm – three and a half hours had flown by in a wink, guests were due to arrive at 5:00 pm, and the cast needed to get ready for the show. That meant one thing… MAKEUP!!!!! I followed the girls to their dressing room with Melody, and Mom remained in the arena to watch Csaba show off with the horses. Hmmmm, maybe I should have stayed in the arena… 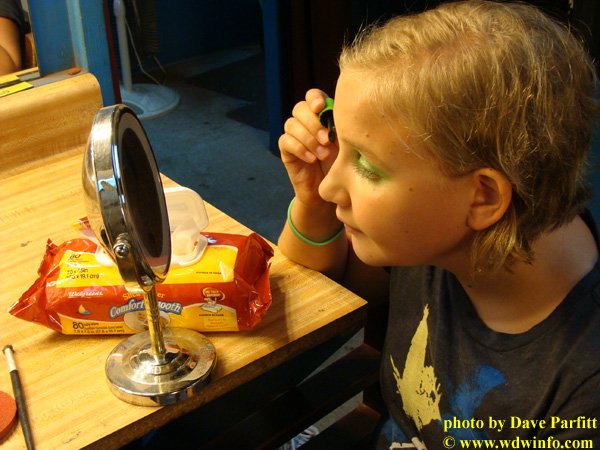 Melody helped the girls pick and apply their makeup. They could choose whatever colors they wanted for their eye shadow, and Melody painted and dusted them with sparkly glitter like the little sisters she never had. Maggie selected green eye shadow to go with a smoldering red wig. Evie picked out a gold eye shadow and an auburn hair color. Cries of “Pretty, pretty!” were exclaimed by the cast as the girls were done up, but Evie didn’t agree and the wig was quickly removed. Backstage in the dressing room, Maggie and Evie were adopted into the Arabian Nights cast family. Everyone pitched in to help and made them feel like long time family members. Glitter and jokes flew through the air, and the “boys” in the show pranced and posed in the wigs discarded by the girls. The girls emerged with green, flowing Bedouin gowns and headdresses for their costumes. It was now 5:00 pm, time for the first guests to arrive, and I needed to see if my wife had ridden off bareback with the Hungarian. 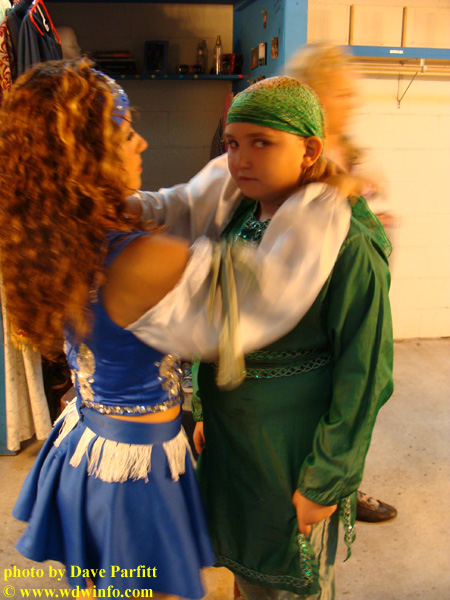 Showtime was at 6:00 pm. However, guests can upgrade to the VIP Experience (for an additional $12-$15) and watch the “Parade of Breeds” pre-show where the horses are marched out and displayed prior to the show. Maggie and Evie entered the arena in costume riding Kerry, the large, gentle American Cream draft horse. After the parade, 4-5 horses remained in stations in the arena. VIP guests can go to each station, learn about and pet the horses, pose for pictures, and meet the performers. The VIP guests also receive a souvenir bag with bracelets and posters, and many of the children asked the performers to autograph their poster. Maggie and Evie were both asked to sign autographs, and Evie meticulously wrote using her best cursive. Note: my children have now officially signed more autographs than I ever have or probably ever will. 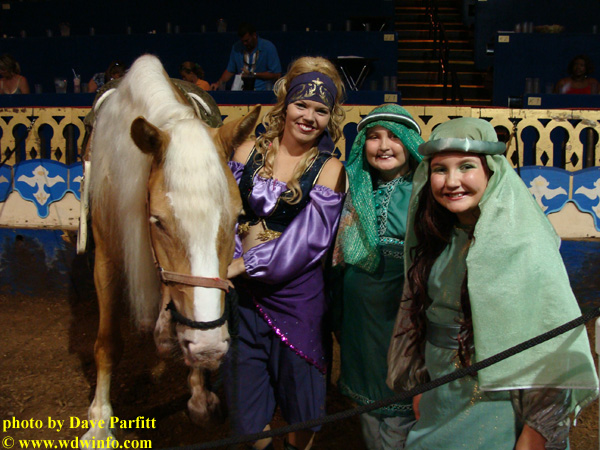 After the VIP Experience, the cast gathered backstage. As Maggie and Evie were now part of the cast, they attended the pre-show meeting, and I was ushered to my seat to join Mom in the arena stands to enjoy the performance. The show opened with a Prince directing an intricate dance with the mysterious Arabian Black Stallion. Next, a caravan of Bedouins wandering the desert entered the arena – Maggie and Evie were part of this troupe led by Melody. 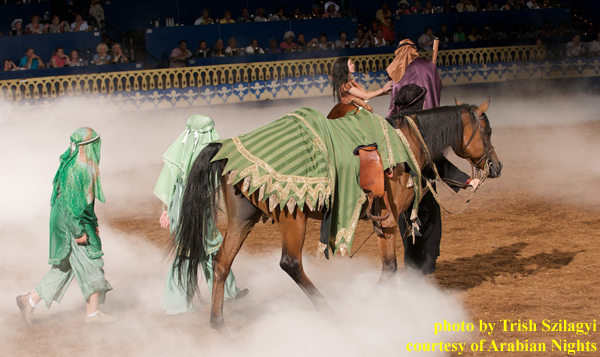 The Bedouins set up camp in the arena, gathered around a campfire, and listened with rapt attention to a tale of a Princess and her Genie. 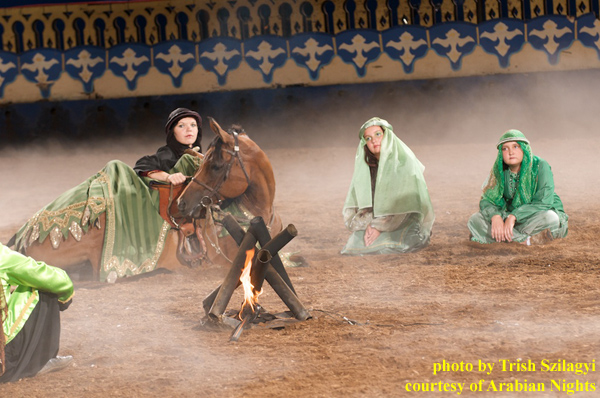 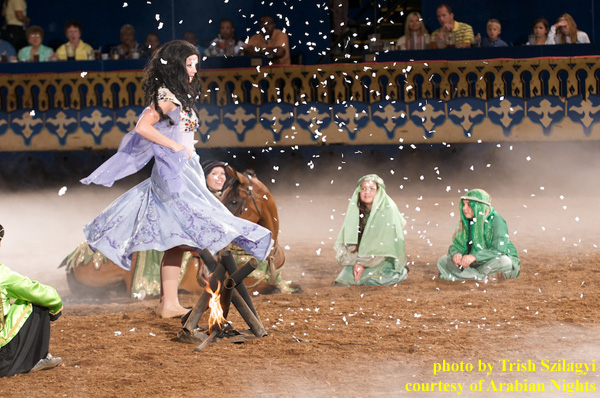 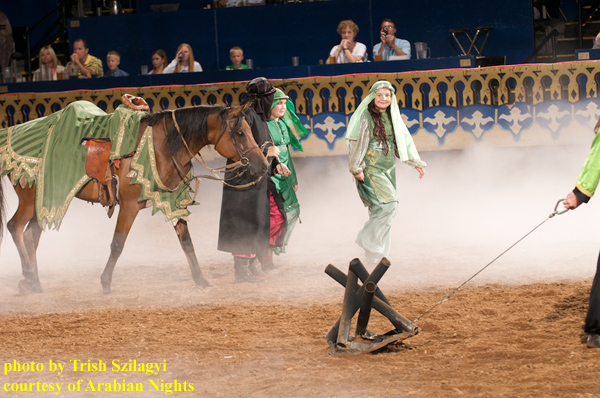 After Maggie and Evie exited the stage, they quickly changed out of their costumes, and joined us in the audience to eat dinner and watch the rest of the show.

The girls were totally mesmerized by the show, and more so because they were a part of the cast from their day backstage. During the show they whispered to each other, “Melody’s in this act…” or “there’s Csaba!” When Melody rode around the ring standing on the back of one, or sometimes two, horses, she would give special smiles and waves to Maggie and Evie – who waved back and cheered for their new friend.

The cast, crew, staff, and horses of Arabian Nights are one huge family, and they welcomed us into their family. From our brief experience backstage, it was clear how much love and respect they have for their horses. Everyone takes immense pride in the show, and bent over backwards to show us all the hard work that goes into making it happen every night. Since we returned from our Orlando, Maggie and Evie continue to say the day at Arabian Nights was their favorite part of the vacation, and they are already asking to see the holiday show in December.

For more photos from our performer for a day experience at Arabian Nights, you can check out this photo gallery.

Disclosure: As of December 2009, the Federal Trade Commission requires disclosure of any payments or considerations. Arabian Nights provided this customized “Performer for a Day” experience to David Parfitt and his family at no charge.