A Total Recall of his Forbidden Journey
Part 3 of 3: Wizard of Universal

In Part 1 of my interview with theme park designer Thierry Coup, Vice President of Creative Development for Universal Creative, he discussed his early years as a theme park attractions designer with Walt Disney Imagineering.  In Part 2, he described his work developing Universal’s Islands of Adventure, particularly “his baby” the Amazing Adventures of Spider-Man.  Continue after the break for the final installment, where Thierry Coup describes how Universal worked with author J.K. Rowling to bring the Wizarding World of Harry Potter, the most anticipated expansion to a theme park to life. 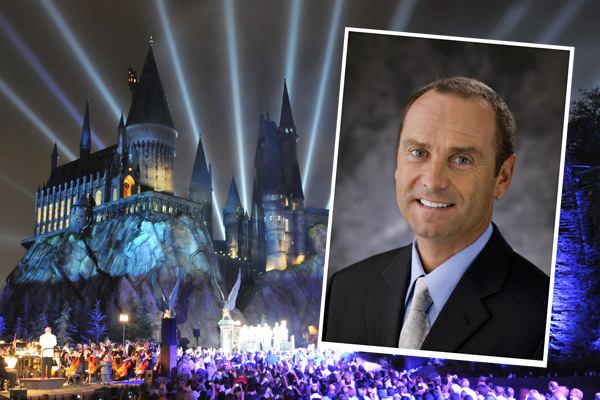 Thierry Coup was the brains behind the new land’s signature attraction Harry Potter and the Forbidden Journey – billed by Universal as a “game-changer” for theme park attractions.  The goal for Coup and his team was to take inspiration from their Spider-Man attraction, go to the next level, and place the guests in the middle of the action.  With Spider-Man, the action is brought to the guests in the ride vehicle, but now with the robotic arm ride system used in Forbidden Journey guests are transported into the scenes themselves.  Coup described it in this way:

“It really makes you feel like you’re able to fly and fly freely into all these incredible environments that people have seen in the Harry Potter films, and get so close to the action and close to these great sets and creatures… there’s nothing like it.” 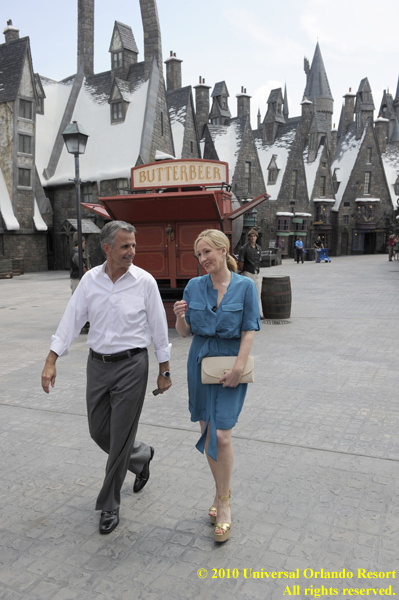 Thierry Coup and his team worked closely with J.K. Rowling, author of the Harry Potter series, in the creation of the new land and its signature attraction.  He described Rowling as very supportive and involved with their work, and they traveled to Scotland many times to meet so she could review the evolution of the concept from beginning to end.  “She was very involved,” Coup said of Rowling. “It was one of the things that makes Wizarding World of Harry Potter so magical and unique.”  Coup noted that Rowling was not the only one involved, but also the film makers and actors of the Harry Potter series as well.  Coup continued,

“It just goes from beginning to end, we really haven’t left anything behind as to making this as true and authentic to what the fans would expect, and even beyond expectations.  It’s an incredible level of authenticity and detail that’s put into this park, and, in the Wizarding World of Harry Potter, it’s all there, and we’ve taken it [the detail] to the highest possible level.  We had the help of J.K. Rowling, the filmmakers for the Harry Potter films, and the people at Warner Brothers – the studio involved in Harry Potter as well.  It was a very rich experience putting this together, and the product, and the experience shows.” 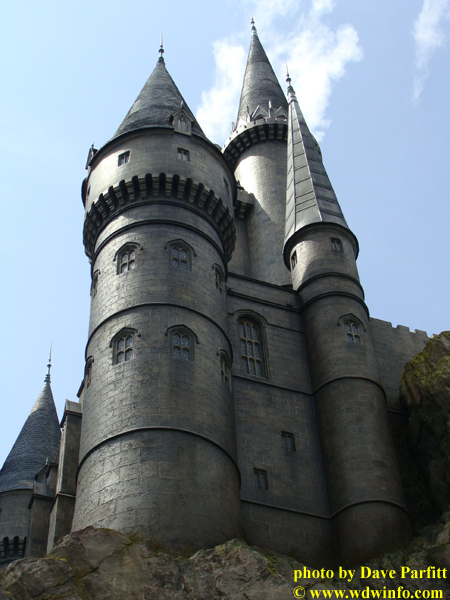 However, as thrilling as this new ride is, it has had criticisms.  One of the most common is in regard to the size limitation of the attraction, and riders with large frames not being able to secure the over-the-shoulder restraint harness.  Coup has heard these criticisms, but asserts size restrictions are common for theme park attractions, and Forbidden Journey is no more restrictive than any other attraction guests experience at Universal Orlando.  “Funny enough, the Forbidden Journey is probably less restrictive than some of the roller coasters and other rides we have,” Coup claims.  He then described his experience on opening day riding Forbidden Journey next to a 6’11” professional basketball player from the NBA’s Orlando Magic.  Coup noted this person was certainly beyond the norm as far as scale and he fit comfortably in the ride vehicle.  Coup expounded:

“It’s very common to our rides in general in making sure the guests are obviously very safe and the system is designed to accommodate that safety while it delivers a great experience.  So, it’s not unlike many things common to theme parks or attractions – it hasn’t really come up as a problem.”

There are no plans at this time to offer modified/larger seats in order to accommodate larger framed riders.  However, Coup noted a couple of things they have observed and are considering revising. 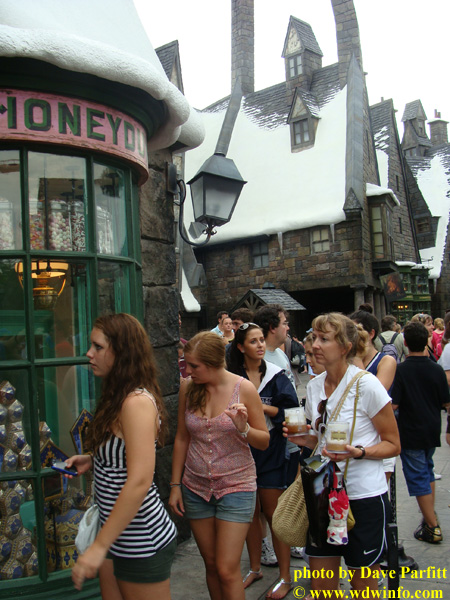 Coup said they have been surprised at the level of passion for the Wizarding World of Harry Potter, “to a point where there are lines to get into most of the retail shops whether it’s Zonko’s or Honeyduke’s… there are lines…” However, Coup went on to say these retail shops are attractions unto themselves, more like “mini-shows”; the retail shop with the longest queue all Summer has been Ollivander’s Wand Shop where it is not uncommon for guests to wait 1-2 hours to experience the 5 minute show. 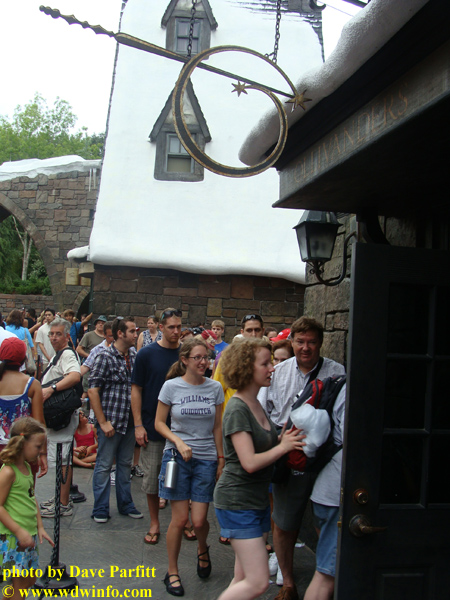 Regarding the long waits for Ollivander’s Wand Shop, Coup said the following:

“It was very important for us, for the author, for everyone involved to make this an intimate experience like it was in the films with Harry Potter going to Ollivander’s to get his wand.  So certainly, the amount of people that can go through the experience is limited, but it’s one of the things that makes it authentic and true.  There are long lines to get into Ollivander’s, but it doesn’t seem to be an issue at all whatsoever because the experience is so wonderful that the smile on every guest that gets to go in Ollivander’s is worth the wait.  It really is.” 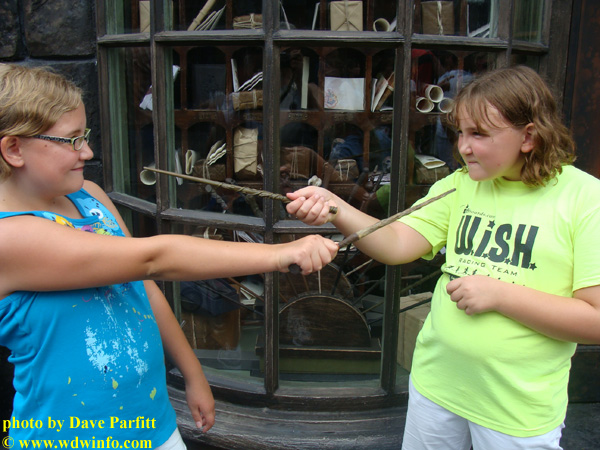 The popularity of the Wizarding World of Harry Potter have led many fans to speculate that Universal will expand the new land into the remainder of the Lost Continent area of Islands of Adventure, and Thierry Coup did not rule out the possibility of future expansion:

“Certainly we want to make sure we learn from what we have opened today and we watch and see how the fans and guests really experience it and there’s certainly some time before we decide to do anything else.  But, you know, it makes sense in the future to expand, but at this point no decision has been made. 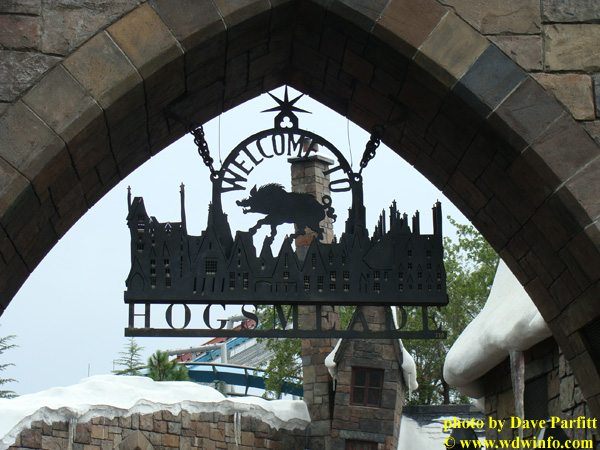 In closing, Coup said they have all been thrilled beyond expectations to the guest response to the new land and with the reliability of the Harry Potter and the Forbidden Journey attraction.  Coup said it is unheard of for a brand-new ride with cutting edge technology to deliver flawlessly on its first month of operation.  However, it would seem what Coup enjoys most about the new land he created goes back to what he first talked about when he described his love for theme park design.  Coup ended with this: 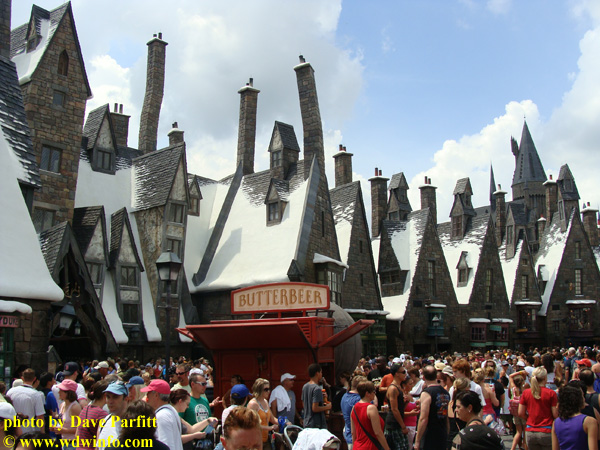 I appreciate Thierry Coup taking the time to talk with us, and giving us insight into the planning and technology that goes into creating a new land and attraction such as The Wizarding World of Harry Potter.

To listen to my full interview with Thierry Coup,