Via Napoli Press Event at Epcot

The DISUnplugged was invited to attend the media/press event for the new Via Napoli restaurant in Epcot in the Walt Disney World Resort, Florida.

Usually Pete Werner and/or Corey Martin will go to these media events and cover them for the DISUnplugged blog and podcast, but since this one was one ‘food related’ it was decided that Kevin Klose and I would attend; Kevin being our restaurant reviewer and me, well, I just like to eat. 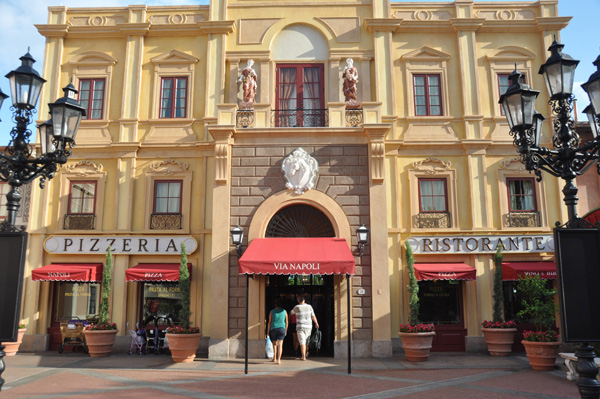 The event was scheduled to begin at 11 AM on Thursday morning August 5, 2010.  Knowing that we would have to be at the back of Epcot early, and that we are not fast walkers, and that the temperature in Florida has been roughly the same as the surface of the sun, we gave ourselves ample time to make it to the event.  We arrived at the turnstiles at Epcot at 10 AM and headed back to the Friendship Boatlaunch.  Feeling good about our timing, we sat in a shady spot and waited for the boat to pick us up.  After about 10 minutes, it dawned on us that World Showcase doesn’t open until 11 AM and the boats wouldn’t start running until then.  So much for being Disney experts.

As the temperature started to head above 90 degrees, we gave in to the idea of having to walk around World Showcase back to the Italy Pavilion for the event.  We knew we could make it there in time even with stopping to rest.  Well, we got to Norway and we were stopped by a troll.

OK, not a troll.  More like a rope across the walkway with a sign that read “World Showcase Opens at 11 AM” and a perky young cast member with a great big smile.  But wouldn’t it have made a better story if it were indeed a troll?

Anyway, we explained to the Cast Member why we were there and why we had to get into World Showcase early.  She was very sweet and very nice but would not let us in until she spoke with a supervisor.  She called someone on her radio and we waited.  After about 10 minutes of waiting for a supervisor to appear, up walks our friend Jason Garcia from the Orlando Sentinel armed with his invitation to the press event as well.  We exchange pleasantries with Jason and now, feeling our position is bolstered by the presence of the print media, we explained our need to enter World Showcase early again to the Cast Member.  After a few minutes a manager appeared on a Segway and we were allowed to enter World Showcase and make our way to the event. After a few minutes of walking together, Jason realized we were just slowing him down so he left us behind like dead weight and went ahead.

When we arrived at the Italy Pavilion, we found a decent sized crowd outside of the new Via Napoli restuarant, and watched the last few minutes of the opening ceremonies.  Apparently people spoke, confetti filled the air and Mickey and Minnie were there to help cut the ribbon.  To be honest I was hot, sweaty and mad so I wasn’t really paying attention. 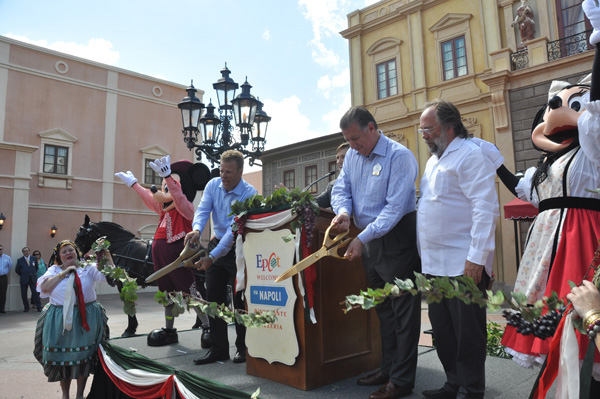 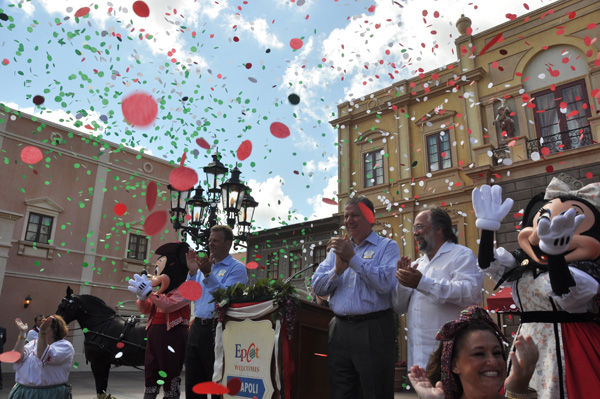 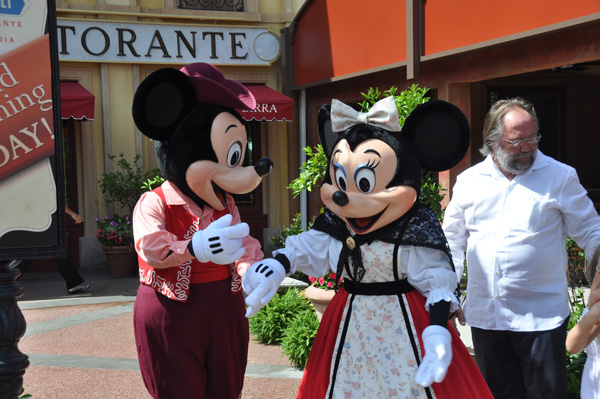 We were then invited into the restaurant.

Kevin and I entered quickly and found a table to sit and try to cool off.  We were hot and tired from our long trek and all we could think about was trying to cool down.  That’s when we spotted our fellow Podcaster Kathy Werling.  She looked cool and dry and chipper.  We said hello and I told our tale of trying to get here in time and then she said the most evil sentence I have ever heard, “How come you didn’t take the shuttle?”  It turns out there was a press check-in area at the front of Epcot where press could ride a shuttle back to the event. At that point I think all of Epcot heard me yell, “There was a freaking shuttle!?!?”

As I stewed about the stupid shuttle we could have taken, I finally started to cool down and that’s when I noticed the beauty of Disney’s newest restaurant.  It is light and open with tall ceilings and wonderfully painted frescos on the walls.  This is by far the most open and bright restaurant in Epcot.  One side is an open kitchen/prep area where diners can watch their pizza being made.  The most remarkable part was the wall of pizza ovens, you just have to see them in person to appreciate how awesome they are. 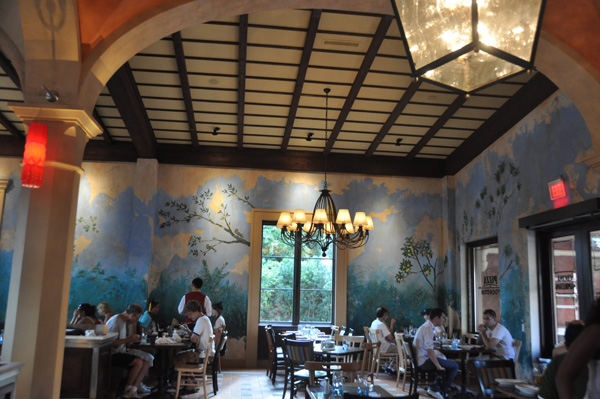 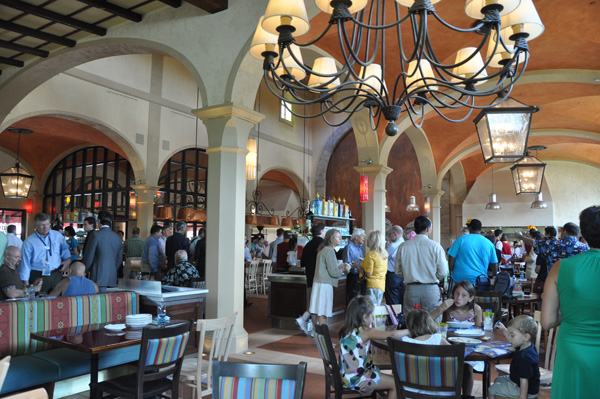 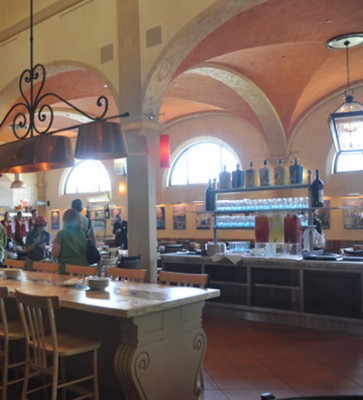 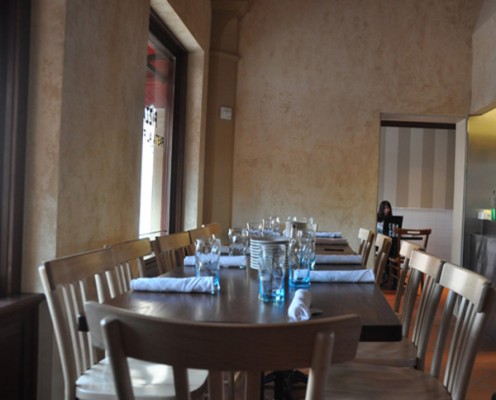 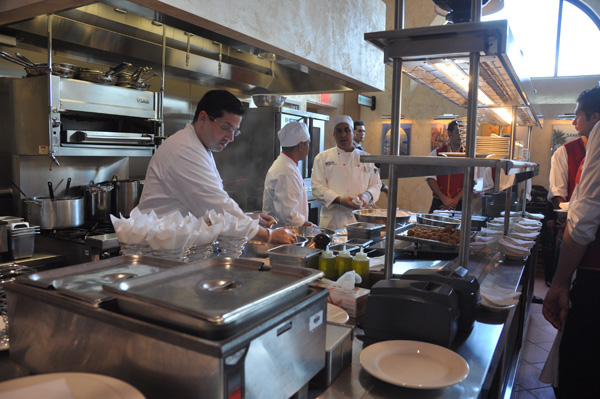 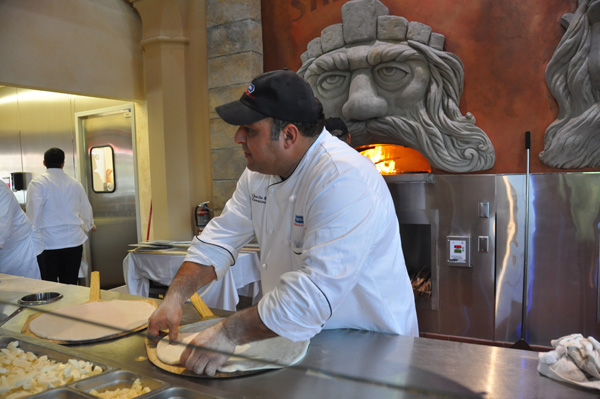 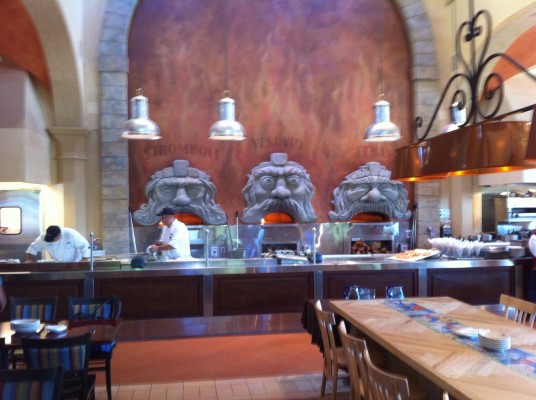 And then the waitstaff appeared with drinks and food for everyone to sample.  While there is no way to review this restaurant based on what we tried, I can say the samples were, for the most part, spectacular.

Glasses of Acqua Panna (seasonal fruit juice coolers) were offered in three flavors; Limonia, Blood Orange and Strawberry.  I could become addicted to these light and refreshing drinks (until I saw they were $5 per glass on the menu).

Sample portions of their Calamari Fritti and fried zucchini were offered up in crisp white paper cones and were absolutely delicious. 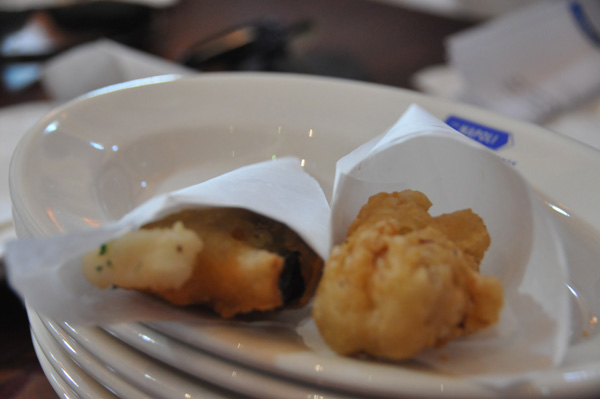 Arancini (fried risotto balls with mozzarella and meat ragu) came around by the tray full.  They were perfectly fried and seasoned, I think I ate a dozen. 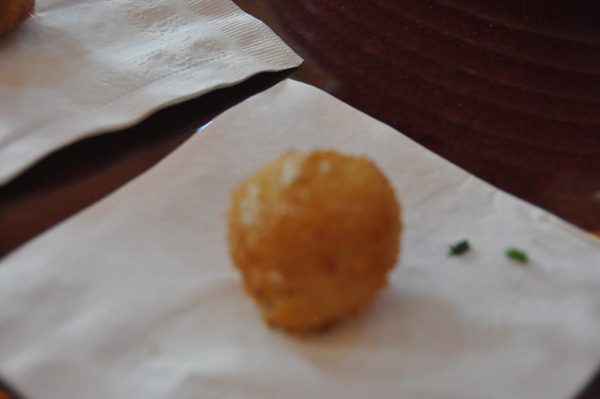 The only misstep was the pizza, and in all fairness I just think that by the time it got to us it was cold and soggy.  Kevin was brave enough to try to the cantaloupe and prosciutto pizza but all I saw was cantaloupe on pizza sauce and decided to skip it. 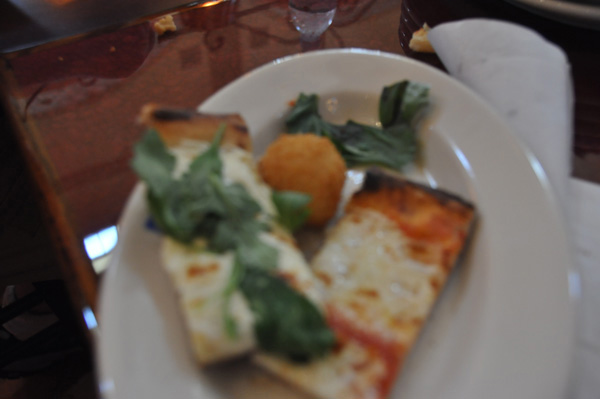 Based on what I heard from other guests, and what the pizza looked like when it was fresh, I would be willing to give this another try when we do return for our official review of the restaurant. 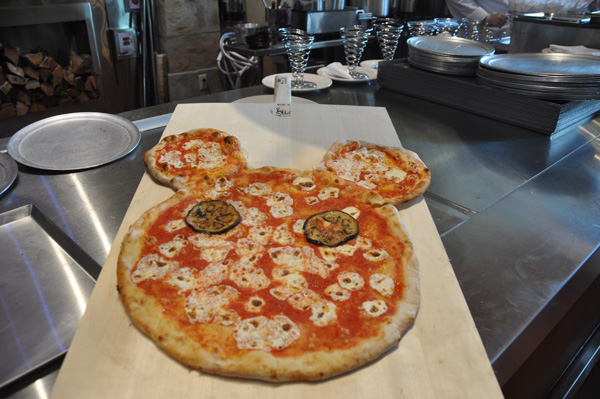 Lastly a sampling of desserts were passed around; Tiramisu, Gelato and a fruit cup all seemed to hit the spot with everyone who tried them. 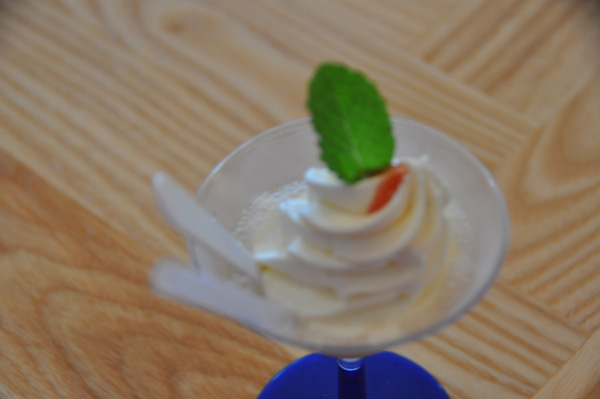 After getting our fill of food we had a chance to speak with some of the key players involved in opening Via Napoli. Nick Valenti, CEO of Patina Restaurant Group and Executive Chef Charlie Restivo were very happy and excited about their new restaurant and seemed to enjoy the crowd’s enthusiasm about their food and decor.

We even had a chance to speak with Dan Cockerell, Vice President of Epcot, about his Dad, Lee Cockerell, who has become a good friend of the DISUnplugged.

As we left the event we were handed a ‘goodie bag’ with the menu, a press kit about the restaurant and a pizza cutter branded with the Via Napoli logo. 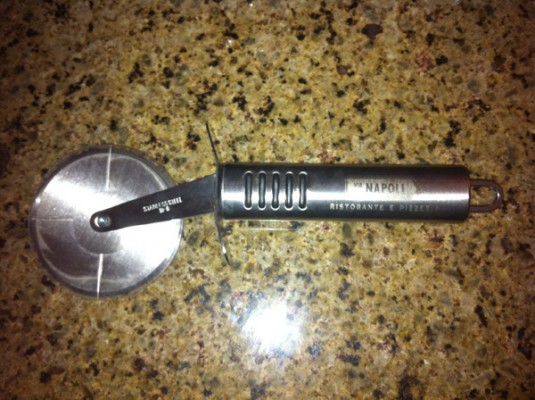 We also left knowing that we would return to Via Napoli to try the rest of their menu, just on a day that was not quite so hot.