As a Disney fan, you may also enjoy Star Wars, maybe due to attractions in Disney theme parks such as Star Tours, Jedi Training Academy, and the Stormtroopers atop the gates of Disney’s Hollywood Studios for Star Wars Weekends.  However, you may wonder what Star Wars Celebration is all about.  Is it worthwhile to use part of your Disney vacation to venture off property to check out the event August 12-15 at the Orange County Convention Center?  One of the event organizers, Steve Sansweet – Head of Fan Relations at Lucasfilm Ltd., addresses just that question for us Disney fans.  Continue reading after the break to learn more. 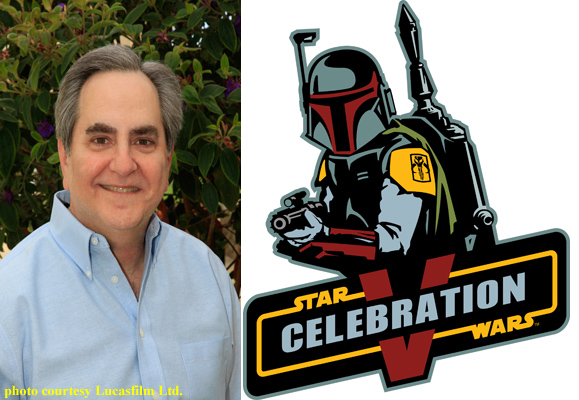 Orlando was specifically selected for Star Wars Celebration V due to Lucasfilm’s close relationship with Disney.  Sansweet commented, “George Lucas LOVES the Disney Parks, and visited them frequently – especially as a Dad when his kids were young.”  Lucas’ enjoyment of the theme parks developed into a relationship with top Disney executives; they decided to collaborate, and thus, the original concept for Star Tours – a joint venture between Walt Disney Imagineering and Lucas’ Industrial Light and Magic – was born.  Eventually, the collaboration grew into Star Wars Weekends at Disney’s Hollywood Studios which allowed fans to engage in Star Wars in a different, more interactive way; very similar to what occurs at Celebration events – but bigger… much, much bigger… think Star Wars Weekends on steroids. 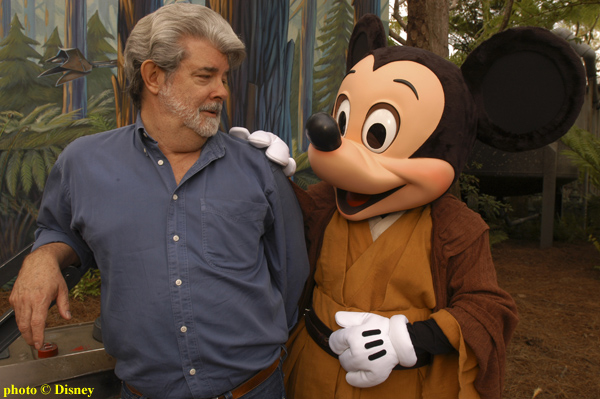 At the last U.S. event in 2007, over 34,000 fans descended upon Los Angeles to celebrate the 30th anniversary of the first Star Wars film.  They are predicting at least that many (maybe closer to 40,000) will attend Orlando’s event.  Sansweet said Celebration V will be similar to spending the day at a theme park – except it’s all Star Wars instead of Disney, but there is a lot of Disney included in the event.  Disney’s Jedi Training Academy has been a staple at the celebration for a number of years.  Disney merchandising developed an entire line of exclusive Disney/Star Wars cross-over products only available at Celebration V.  Steve Sansweet gave us some more details on the exclusive merchandise.

“There are all kinds of really cool pins and pin sets like you might see at Star Wars Weekends, and an exclusive action figure: Donald Duck as a Stormtrooper on a numbered backer card.  And a sneak-preview of the StarSpeeder 1000, the redecorated craft that’s going to take you on your journey to wherever it is you go when Star Tours reopens next spring.  This has the deco and some of the sounds of the new ride plus lights, and that’s a limited edition that will stop being on sale when the new Star Tours opens.”

Plus, there is a major, private party (separate ticket required) on Saturday, August 14th at Disney’s Hollywood Studios called “The Last Tour To Endor” with a final ride on Star Tours before its shut down for renovation, themed Star Wars shows, a Death Star Disco, and a special themed fireworks show set to the Star Wars score titled “Symphony in the Stars.”  In a recent interview with StarWars.com, Disney Imagineer Jason Surrell, Senior Show Writer and Show Director, described the Star Wars fireworks spectacular as something he waited his entire career to create.  Surrell said, “Everyone who has listened to our soundtrack has had a strong emotional reaction to it based on their love for the Star Wars films, so I can only imagine how fans are going to react when they see this show unfold before them in the skies above Disney’s Hollywood Studios.”

Update: After publishing this article, the DisneyParks blog announced details of a special “Hyperspace Hoopla” performance during “The Last Tour To Endor” party.  This dance party is one of the most popular features of Star Wars Weekends, and should be a great edition to the private party.

If you enjoy the celebrity appearances at Star Wars Weekends, then Celebration V is the event for you with over 40 guests slated to attend.  On Saturday, August 14th “The Maker”, George Lucas himself, will be interviewed by unabashed Star Wars fan Jon Stewart in what’s been billed as “The Main Event.” Nearly all the cast of primary characters from the original trilogy including Mark Hamill (Luke Skywalker; in his first ever U.S. Celebration appearance), Carrie Fisher (Princess Leia), Anthony Daniels (C3PO), and Peter Mayhew (Chewbacca) will be in attendance.  Other Star Wars fan favorites to attend include: Ben Burtt (2x Academy Award® winner for sound effects editing), Gary Kurtz (Producer Star Wars and Empire Strikes Back), Warwick Davis (Wicket the Ewok), Daniel Logan (young Boba Fett), Jake Lloyd (young Anakin Skywalker), Temuera Morrison (Jango Fett), Ray Park (Darth Maul), Jay Laga’aia (Captain Typho), David Collins (Audio Lead and Voice Director for Lucasfilm), and Pablo Hidalgo (Managing Editor StarWars.com) just to name a few.  However, one member of the original cast not scheduled to attend is Harrison Ford (Han Solo).  I asked Steve Sansweet whether Harrison Ford might appear, and he gave me the following reply.

“You mean that carpenter guy? Yeah, there’s the famous story that Harrison was in the studio while George was doing the tryouts for the original Star Wars, and they asked him to read against other actors they were interviewing and Harrison was just so obvious and so good that they OK, yeah, we need you as Han Solo. We would love to have Harrison Ford, and we certainly invited him and we talk to him a lot, but Harrison has a filming job that’s come up, and that’s going to preclude him from coming.”

So if you are a Disney fan who also enjoys Star Wars, then I think you would definitely enjoy checking out Star Wars Celebration V, which promises to be “the biggest party this side of the galaxy.”  Steve Sansweet ended our conversation by saying he hoped Disney fans would consider attending because “it’s going to be a great time, and they are going to get a lot of Disney out of it as well as a lot of wonderful Star Wars experiences.” 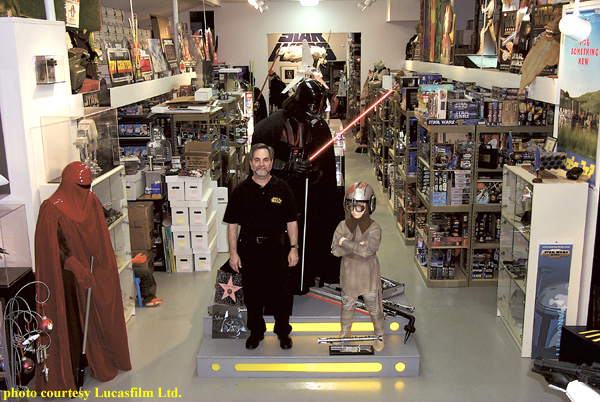 For more information about Steve Sansweet, he is not only Lucasfilm’s Head of Fan Relations, he’s Director of Content Management.  Sansweet has authored numerous official Star Wars books including The Complete Star Wars Encyclopedia (2008), but probably first and foremost, he’s a Star Wars fan.  He’s the owner of the world’s largest collection of Star Wars memorabilia, who got involved in the Star Wars fan community, and ultimately gave up a 26 year journalism career at the Wall Street Journal to accept a plum position at Lucasfilm.  As Steve Sansweet described his position, I could not help but think of Dave Smith, Creator and Chief Archivist of the Walt Disney Archives – Steve Sansweet, the Dave Smith of Star Wars.

A Sneak Peek at the Disney Dream Mock-up Room
Adventures By Disney Is Going to Egypt in 2011, Would You?