Happy 55th Birthday Disneyland!!  If you’re at Disneyland today, you might want to check out some of the festivities going on around the resort.   If you can’t make it, rest assured that The DIS Unplugged will be there and will bring you a full report.   Be sure to check out Disneyland Correspondent Nancy Johnson’s blog that takes a look back at the construction and opening day of Disneyland .

In celebration of the 55th, I’ve asked some of your favorite DIS podcasters, bloggers and moderators to share their memories and pictures from 55 years of Disneyland. 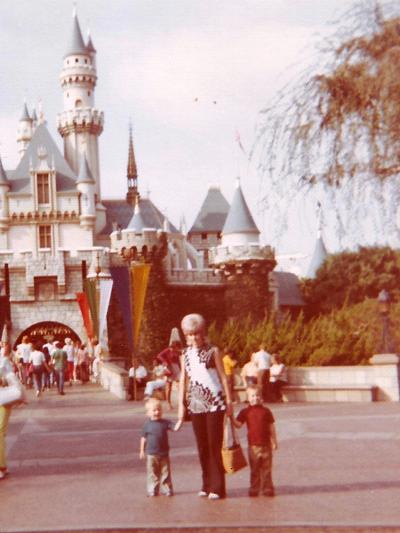 That’s yours truly from one of my first trips to Disneyland (circa 1973).  Read on for more classic pictures and memories from the DIS family. 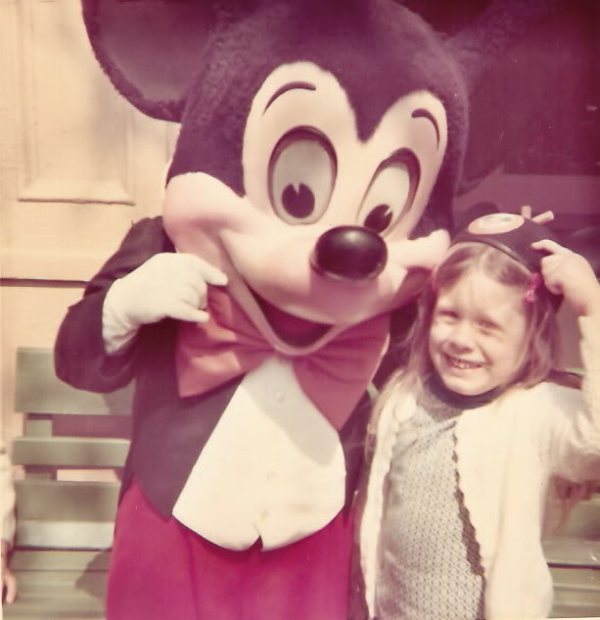 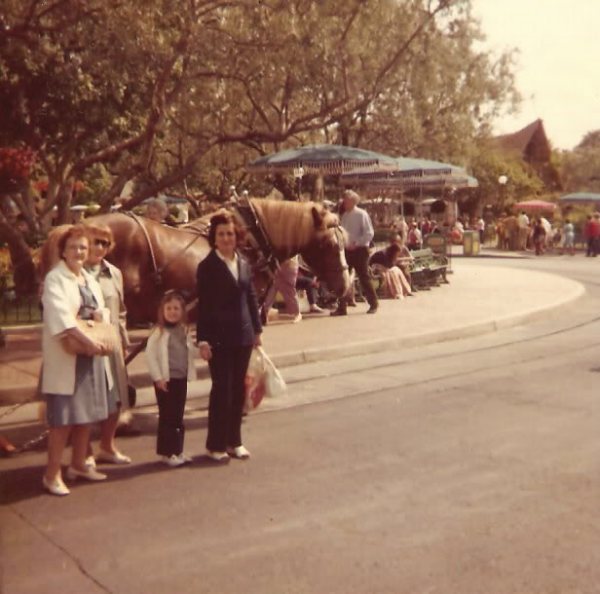 “The photos on Main street from the ’70s remind me that some of my first rides at Disneyland were on the horse-drawn carriage and the other Main Street vehicles, because my grandmother (who was usually with us on those trips) was terrified of riding anything else. These were about the only things she would get on except for It’s a Small World, and even that was a challenge.”

“As someone who only visited Disneyland as a child of 6, the beautiful white and gold facade of It’s a Small World was my enchantment.  We went back to Missouri with my prized souvenir – a record album of the attraction.  I once could sing that song in 6 languages and I’ve never forgotten that record or the attraction’s message.” 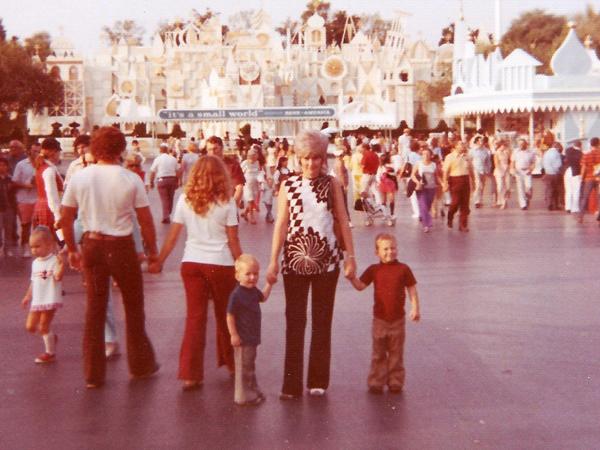 “That’s me on the right, Mom in the middle and my brother Randy on the left.  Love the wig Mom!”

“I was born in Los Angeles, but we moved when I was 2 years old so I don’t remember it.  In 1980, I was in 6th grade, and my parents announced we were going back to California for a week in December to visit their old friends and see the sights.  We spent a day in Disneyland that had me mesmerized.  I remember entering the park and getting the typical family photo taken at the Mickey flower display in front of the train station.  The detail of the Sailing Ship Columbia totally impressed me.  I remember climbing the steps of a Swiss chalet to enter our Skyway tram car, and gaped in awe as we rode through the Matterhorn into Tomorrowland.  Probably my favorite attraction I rode during that trip was the Submarine Voyage.  I was captivated going “underwater” in the submarine, but then ruined the magic for myself by looking up and realizing I could see the surface of the water.  When I rode the “Nemo subs” again this past June, I forced myself not to look up.” 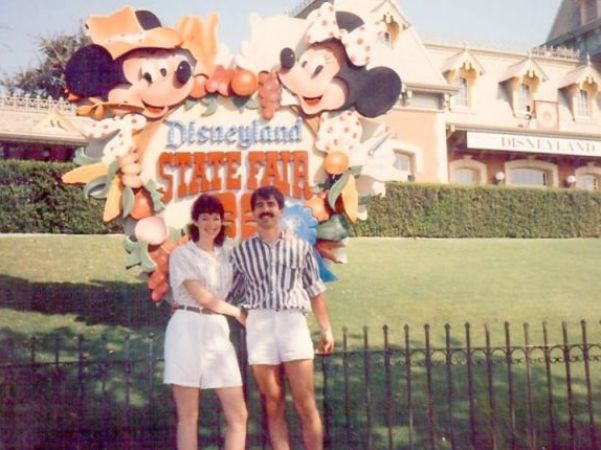 “[This picture] was taken the year we got married…they had a ferris wheel in main st plaza, so we rode that, and carnival games lined small world plaza.” 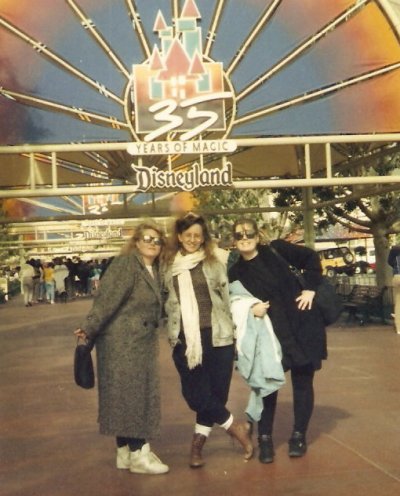 “Here is a photo in front of the 35th anniversary sign, from December 1990 – this was that incredibly cold winter day, where it reached only 40-ish in the daytime and 30 at night. Brrrrrr. This was during the time when Disneyland had that big prize wheel you could spin to win things, and I won a Mickey watch on this trip. I’m on the right in black, my friend Jenni is in the middle and my friend Mandy is on the left.”

“My wife and I had only been dating for a month, back before the days of California Adventure and Downtown Disney, we were driving back to Los Angeles from a day in San Diego.  As we approached the exit for Disneyland off the 5 freeway, we decided to eat dinner at Disneyland.  In those days, that meant the Disneyland Hotel.  We headed over to the Monorail Cafe for an all American tasty meal.  While we were eating, we came up with the crazy idea of riding on the Monorail, which could be done for only $3.00.  We purchased our tickets for our little taste of Disney.  At the time, I worked three hours north of Disneyland and visiting was definitely not a regular occasion.  As if we thought riding the Monorail was crazy, the two of us struggling new graduates came up with an even crazier idea, what if we bought…passes.  Of course this was before every single Southern Californian owned one.  We tried to figure out a plan to make it a wise economic decision, which it wasn’t.  But we bought the passes anyway.  We began to visit the park more and more, eventually got married, moved to Orange County, and started our family.  It was that dinner and Monorail trip that helped foster not only our love of each other but Disneyland.  Who knew $3.00 could lead to a lifetime full of memories?” 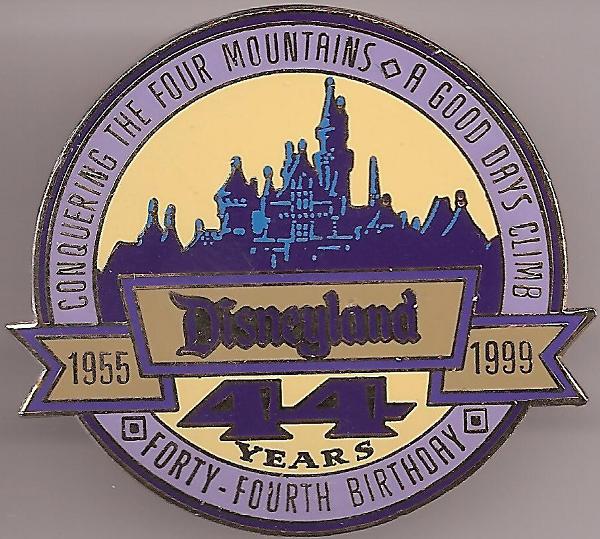 “A free pin celebrating Disneyland’s 44th Birthday as we walked through the gates!  Imagine that.”

“I have been going to Disneyland since I was a young girl back in the early 60’s.   Since that time, Disneyland has always been special, with its own special magic.  At a young age the characters were so real to me.   On one particular trip when I was younger, I was convinced that I danced with Bert from Mary Poppins.  I was so excited that BERT danced with me. Later, as I grew older, I began to appreciate the magic in Disney as I watched family and friends experience it for the first time.  I will never forget watching Fantasmic with my cousins from Spain. They didn’t speak English, but after the show my 13-yr old cousin turned to me with shining eyes and exclaimed, “QUE GUAY!” (How Cool!).  Another time, we were watching Fantasmic, and after the Peter Pan fight with Captain Hook, my 5-yr old cousin asked, “Where’s Tinkerbell?” I assured her she would see Tink in a bit.  During the fireworks, when Tinkerbell flew through the sky, I glanced at my cousin, and she sat there with wide eyes, mouth opened in an “O” and her hands to her cheeks, full of wonder.  It is moments like these that I love, and Disneyland evokes this spirit in people everyday.  That is one of the reasons why I just love Disneyland.” 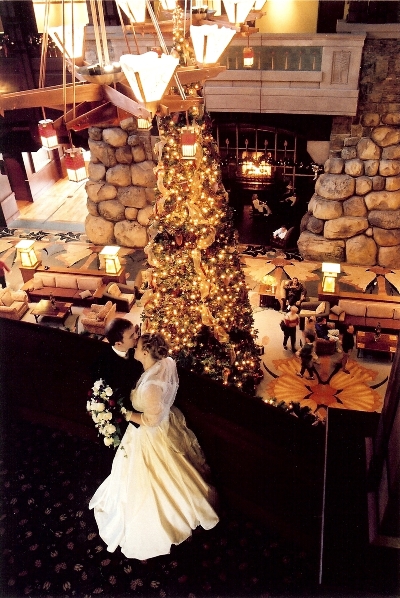 “I lost sight of Disney until adulthood.  When I moved to Los Angeles, I got to introduce Disneyland to my future husband.  He wasn’t in to Disney, but warmed up enough to seal the deal there at our wedding at Disney’s Grand Californian Hotel – Christmastime, 2001.  Disneyland is a magical place for the holidays, but having a wedding there is truly magical.” 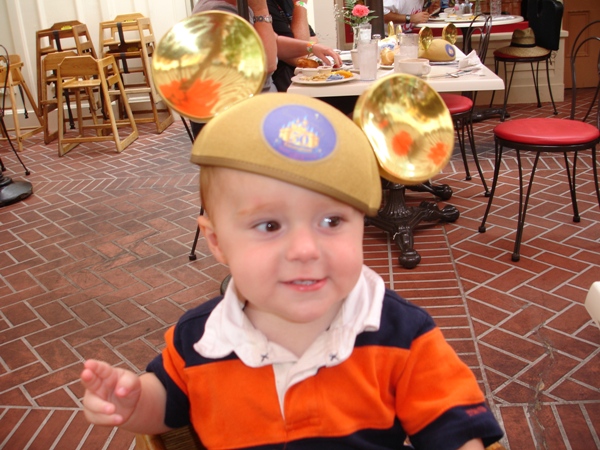 “When Disneyland’s 50th came around, we knew we had to be there.  I even skipped my class reunion to be there.  We drove down the day before and spent a brief night at the Candy Cane Inn before getting in line in the wee hours of the morning.  It was still before dawn when they let us in to California Adventure, where we received our free gold ears.” 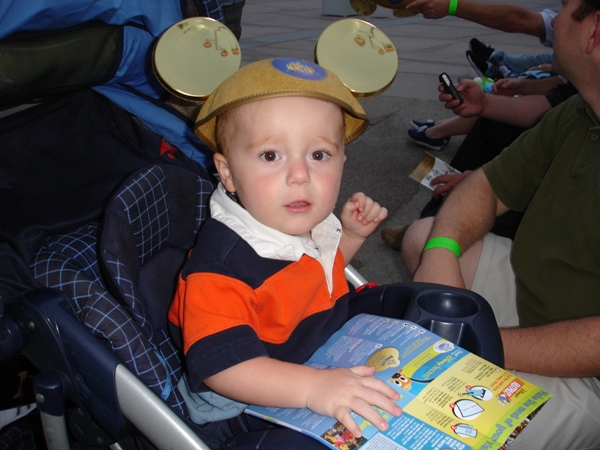 “We waited there until Disneyland openend, then we were led through the esplanade, which by this time was packed full of people, and into Disneyland.  Throughout the walkway they created in the esplanade and well into Main Street, there were Cast Members lined up on either side, clapping and cheering and wishing US a Happy Birthday.” 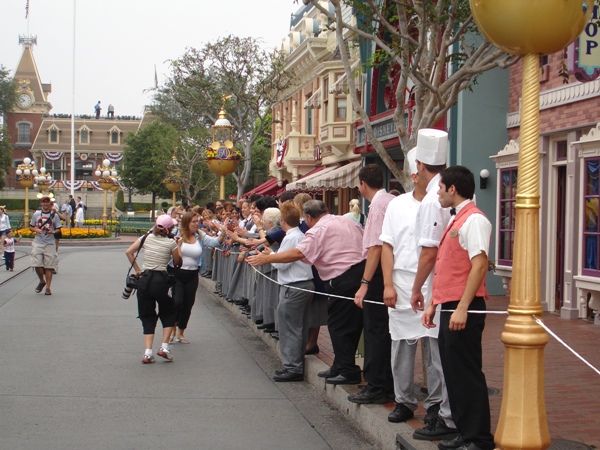 “With the size of the crowds, we knew we weren’t going to get much done (one ride, in fact), so we took it easy and started with breakfast at Carnation Cafe.  That’s where we had our first free cupcakes of the day, and met Oscar, Disneyland Class of 1956.” 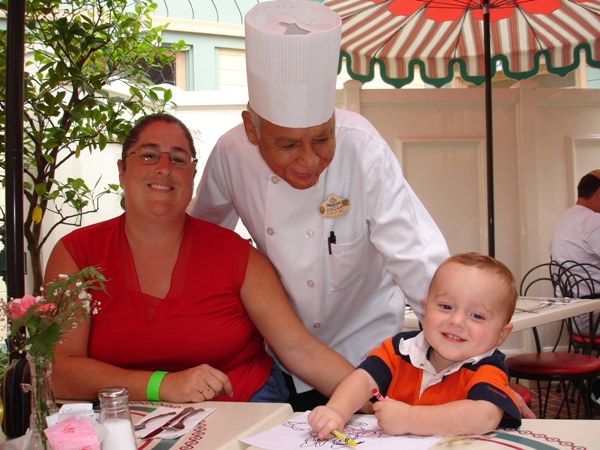 “Standing there watching the [50th birthday re-dedication] ceremony had me in tears and I had goose bumps.  Very moving.  I just thought for the first time I went how familiar the park seemed to me.  I could almost imagine Walt walking around the park.” 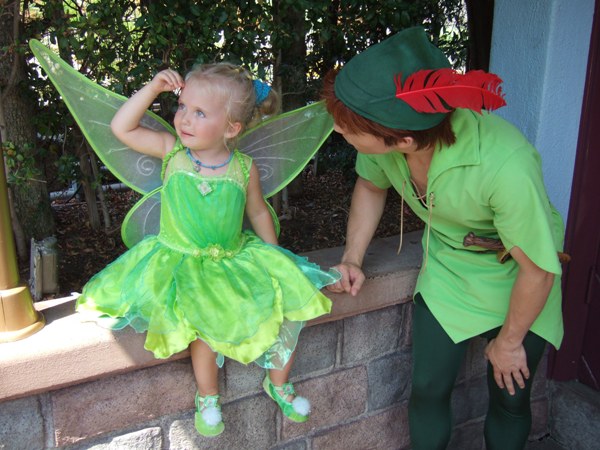 “This was the first time our daughter Zoe ever dressed up to go into the park, and she specifically went to find Peter, as he is always on the go and chooses his own meet and greet spots (although they are usually somewhere behind Dumbo).  We had to wait a while, but he finally appeared and was completely enchanted by her.  They spoke for quite a long time about pirates and fairies and adventures and he asked her to look to the sky and find Neverland with him.  We were able to catch that instance with our camera.   As adults, it takes a moment like this to fully realize the power that character interactions have in our children’s world – and this was the ultimate example.” 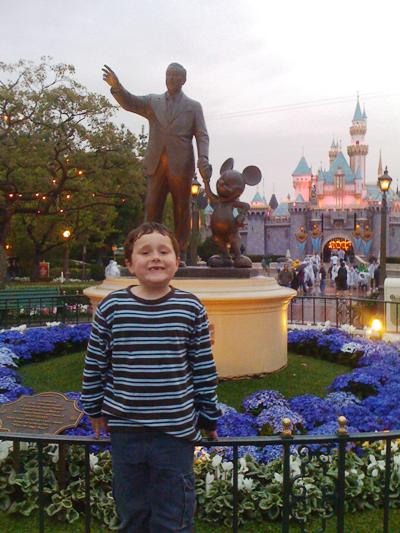 “My son, West, in front of the ‘Partners” statue, which reads: ‘I THINK MOST OF ALL WHAT I WANT DISNEYLAND TO BE IS A HAPPY PLACE…WHERE PARENTS AND CHILDREN CAN HAVE FUN, TOGETHER. –WALT DISNEY'”

I’ll leave you with that thought.  Thanks again to everyone who participated in this trip down memory lane.

“Weird Al” Yankovic Performs At Universal Orlando’s Hard Rock Live
Video: Give A Scoop Of Hope By Having Ice Cream For Breakfast