Nancy Johnson | June 9, 2010 | 7 Replies
Something has been bugging me for weeks now.  I’ve been afraid to talk about it.  I’ve finally decided to spill my guts.

Disney’s California Adventure Park is about to unveil possibly the biggest and best thing that has happened to that park in its history.  The opening of World of Color is of epic proportions – bigger than a a measly roller coaster opening.  You think I’m exaggerating?   No.  It’s as big as when they introduced Illuminations to the guests at Epcot in Walt Disney World.   California Adventure now faces newly expanding crowds, new chaos, and a vibe of eagerly-awaited anticipation that can turn angels into screaming, impatient monkeys.  For the first time in my Disney-loving life, I was afraid of attending a big Disney event!   As much as I may regret it, I’m going to say it…..  As a parent with small children, I’m not looking forward to facing those crowds on opening weekend at all – actually, not even for the first few months. It’s daunting.  I have no clue how minimize the stress of the event on myself and my family.   I want to make sure I go into this as prepared as possible.

I need a plan. 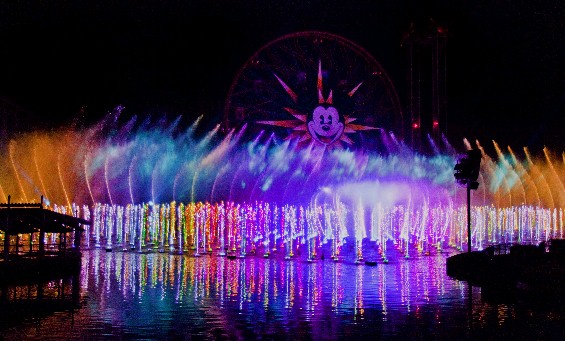 World of Color, as viewed from the Paradise Pier Bridge

So I’m sitting down, putting on my big-girl panties, and I’m starting to think about how I am going to do it.    I thought I’d ask you to bear with me, simply hold hands and travel through the planning process together….

I used to be a die hard, on the go, Disney fan.   I went to Disney Conventions, I collected stuff, I was one of the first in line for experiences.  Now, not so much.  When I first had the girls, we did so many Disney things – I decided and we just did them.  Then, as they became older and more fidgety, it became harder to plan.  Did I mention they began to develop minds of their own?    We started watching all of our childless friends have these great vacation experiences that we used to have and all of a sudden, we became kind of lost.  Now, I either have to go with the flow, or I have to find new ways to steer the ship, so that we have a chance at doing the things that I feel would give us the most out of our Disneyland trips.  World of Color now gives us a new opportunity.

From a business perspective, a nighttime show, like World of Color, has the draw that could bring attendance levels through the roof and pour cash into a theme park that has been hurting since its inception.  From the buzz all over the internet, excited guests – fans of all ages – will be lining up at 6 am on Friday to be in the park for it.   And that won’t stop the first day.  Once the show appears on You Tube in its entirety, people who haven’t been there in years will come dragging their mothballs into the park.    The thought of bringing my 5 and 3 year olds into that media-enhanced swirling mass of mayhem is pretty overwhelming.   It would be like the time we went to Disneyland for the 4th of July fireworks.  Eek.   People tend to lose whatever common sense they had in those crowd situations.

Let’s look at some of the facts we know about World of Color that I have gleaned from reading Disney’s various press releases and blogs: 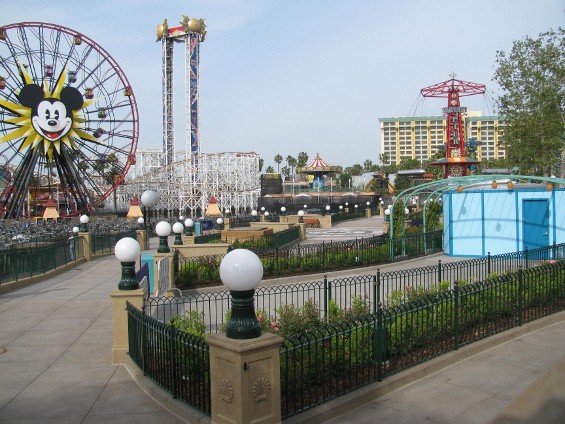 So now that we know these facts, how do we go about making this less stressful?  We make a basic plan before we go.

First off – I’m going to make sure I get a reserved viewing spot. I realize not everyone can pay for the Dinner Viewing Packages.  I’m not asking you to.  But if you are going to spend money for everyone in your party to eat lunch, then consider paying $15 per person (adult and child) for a Picnic Meal, to guarantee you a prime spot to see the show.   This will give you a pretty decent sized full meal that you can pick up and eat between the hours of 2 pm and 8 pm.   I wouldn’t save it to eat while watching the show.  It’s not really designed to work that way.  Have your tasty meal and then head over to claim your spot.   According to Disney, I’ll be able to buy them online starting on Friday, or, if I’m lucky enough to think fast, I can even get them the same day.  The only kicker is that if I walk up to the Sonoma Terrace and get them the same day, then I have to see the later show. That might not work for my kids – they barely make it through to the Disneyland fireworks at 9:25pm.    Online reservations get me the early show. I think the best choice for families is to book online.  You won’t have to mess with the costs on the day of, making it an easier to budget into your visit expenses. If that is out of your budget, your next option is to try for the FastPass lottery and see if you are a winner!

Second – I’m going to make sure my kids take it easy during the day, so we can avoid most of the crowds and lines. This means a lot of play time in the water areas in the summer, hanging out in the Animation Building, or seeing shows, like Aladdin.  These areas don’t feel that crowded and provide simple relief from waiting in lines.   Also, breaks at Baby Care or in the Grand Californian Lobby will be a lifesaver.   That little lobby TV with the Disney cartoons playing is sure to right the wrongs of any cranky attitude.  We can also take a “beverage break” with something from the Heathstone Bar, that we can carry into the lobby and enjoy.

When it comes time for the show, I’m going to take the kids to the restroom and then go to the viewing area with my tickets at a reasonable time – not too early, but not too late, either. Simple advice, but oft forgotten.  This way, when I get there, I can talk to Cast Members and be “informationally nosey” and then visually evaluate where we will be standing and I don’t have to be in the press of those coming to the area later.

My next goal is to be chatty with the folks around me.  By getting to know the people I’m near, we can all look out for each other as the crowds squeeze in. That way, my little ones will feel more secure and maybe meet some new playmates to keep entertained during the wait for the start time.   It also helps in case of “potty emergencies”.   Remember – the nearest bathrooms to the preferred viewing areas are the ones across from the new Little Mermaid Ride construction -at the end of the row of San Francisco Townhouses.

Finally, after the show, I will do everything in my power not to be swept into the tide of people exiting the preferred viewing area. That mass of humanity will be enough to trample a herd of elephants.  I’m going to ask a Cast Member, ahead of time, how they will be evacuating the area.  That way, I can figure out how best to do this.  The press info says that I will be allowed to keep my stroller with me in the viewing area.  That’s a bonus.    I always feel like a linebacker in a supermarket rush at a “10 for $1” sale if I have to fight the crowd to untangle my stroller and push it through the wall of bodies.  That means we can chill and definitely take our time getting out, while others push and shove.  (Of course, Disney may have other ideas – like a clean sweep, so we’ll see what the final results are!)

I’m really hoping this plan will work for me .   If you consider my comment that this is similar to when they introduced Illuminations at Epcot in Walt Disney World, I expect that this will be a giant learning experience on how to manage crowds for World of Color and its staff.  I know it will be for me.  I expect that it will change the way I tour California Adventure for a very long time!

My last piece of advice – your family will be different than mine.  Develop your own plan and then follow Tom, Tony, and I as we experience this epic introduction in the coming weeks.   We look forward to bringing you live and continuing coverage from the World of Color!