A Tour of the Walt Disney Studios in Burbank, CA

As you know, last November, my family had the chance to attend Princess and the Frog – The Ultimate Experience, hosted right on the lot of the Walt Disney Studios in Burbank, CA.  As we wandered around the event, we noticed that the cart that hosted the lithograph pick-up for Royal Seating patrons had a sign on top of it and a host of helmeted, riding crop-bearing VIP Tour Guides from Disneyland around it. We had only but to ask – they were hosting free, 20 minute walking tours of the Disney Studios! This was not listed in the flier for the event and frankly, doesn’t come about much at Disney.

To put our excitement in perspective –  I drive by there every day on my way to and from work, since we live in the neighborhood.  We only get to see what little we can when they open the World of Disney Store on the lot for its annual Studio Christmas Sale – and that isn’t much (except for the famous Mickey Ave and Dopey Drive sign)!  Therefore, we went ahead and signed up for the tour, dragging the kids along. 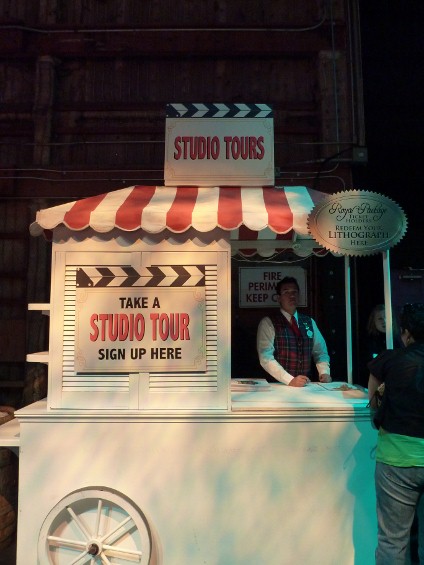 The tour guide escorted us into the backlot, among the soundstages.  It was from her that we learned that the large soundstage where we were meeting Princesses and playing games actually housed a water filming tank under the floor!  Many famous Disney movies with underwater sequences had been filmed there. 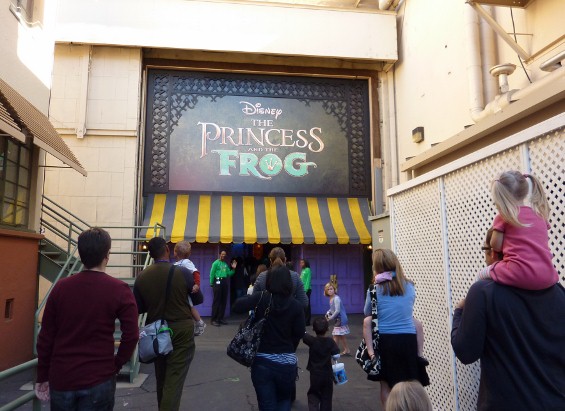 We also found out that some of the older buildings had actually been moved from the original Hyperion Studio, such as the original Shorts Building that we had passed on our way out of the Soundstage. 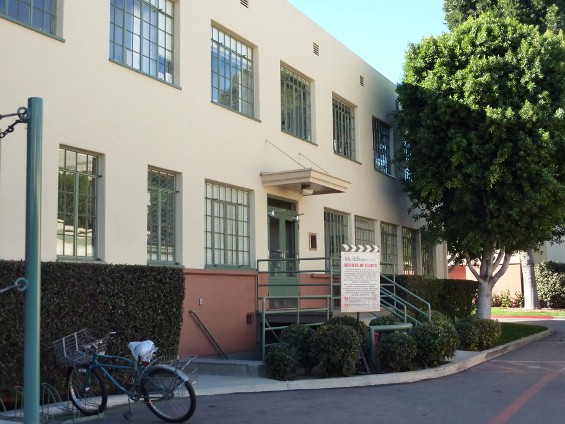 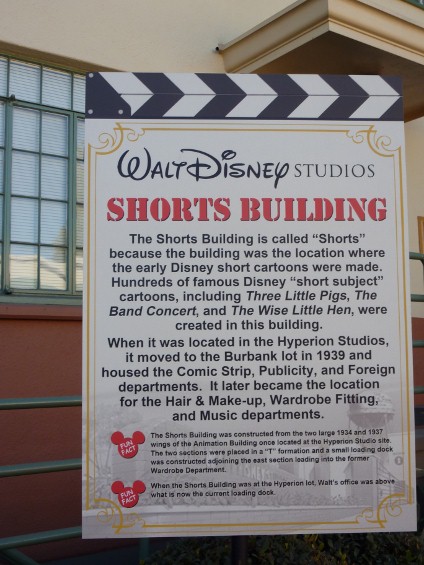 As you can see, several of the soundstages and buildings that we passed had signage added to underscore the history of what we were seeing.  This included the famous water tower, which is no longer used for water storage.  Note the lack of ears on top….. 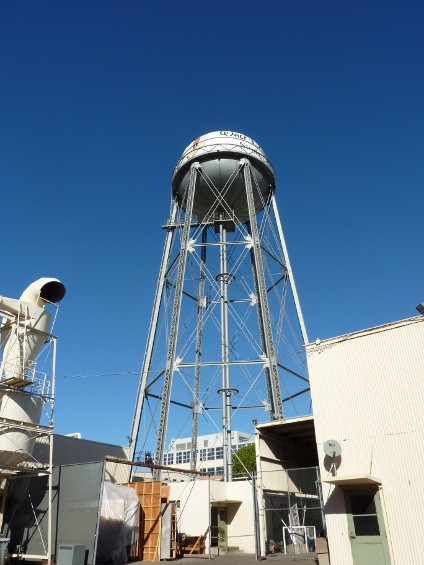 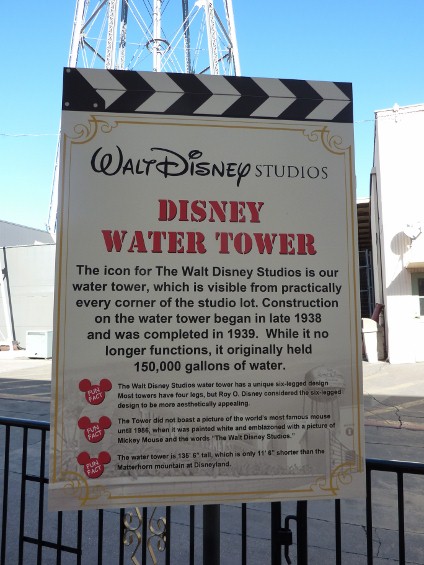 We passed another tour group on the way, and the guides passed the famous “Riding Crop” between themselves. 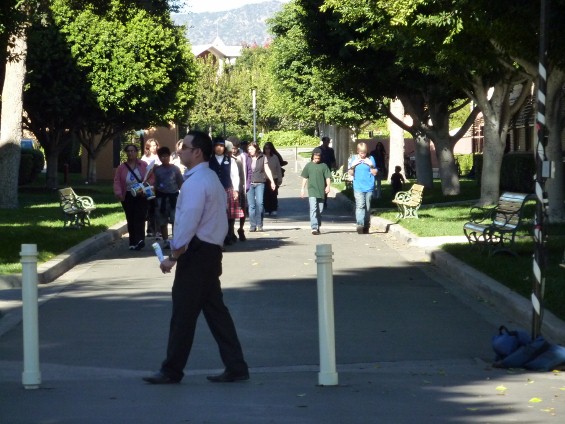 With crop firmly in hand, our Guide took then escorted us to the Original Animation Building. 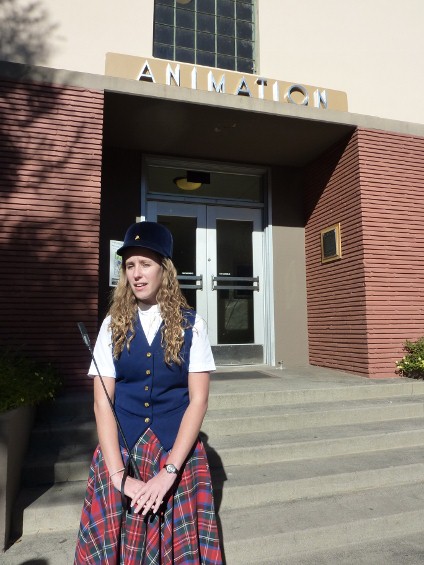 This building was specially designed with the animators in mind – allowing the maximum possible light to enter it for the “perfect” artistic environment.  We were greeted by a portrait of Walt Disney at the entrance. 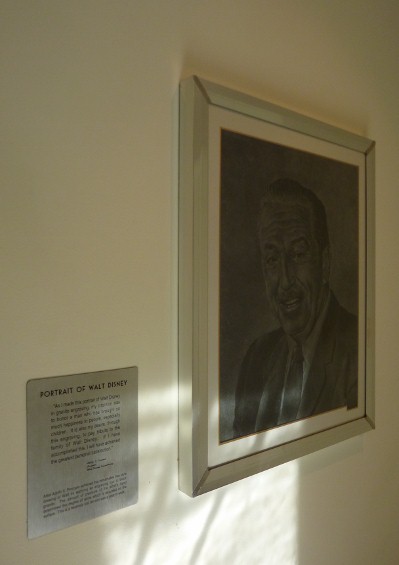 It was there that we walked the central hall, viewing original storyboards and background art for almost every classic and modern Disney movie. 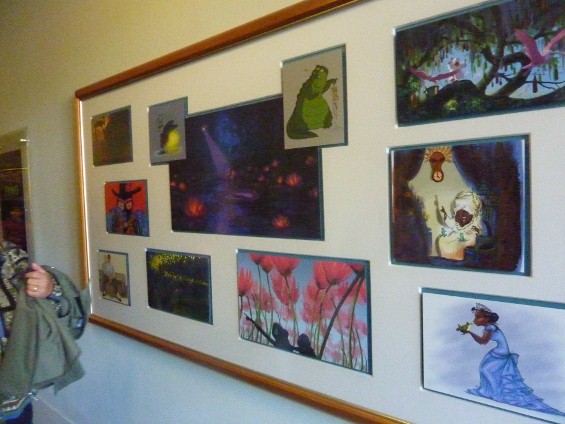 The centerpiece was the inlaid Steamboat Willie, made of various marbles and other materials. 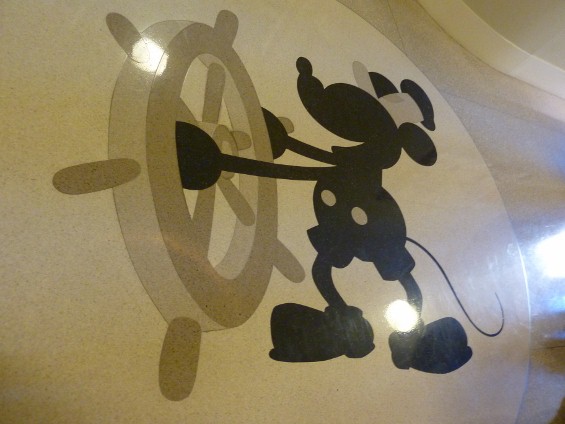 From there, we walked to Legends Plaza. This open plaza sits near the front of the Studios’ Alameda entrance and lies between its two most prominent buildings – the Administration Building with the Seven Dwarves pediment 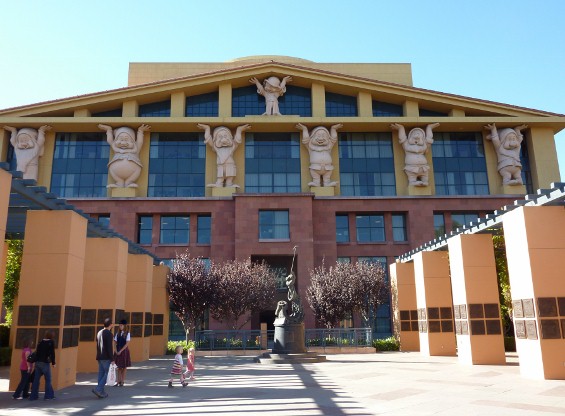 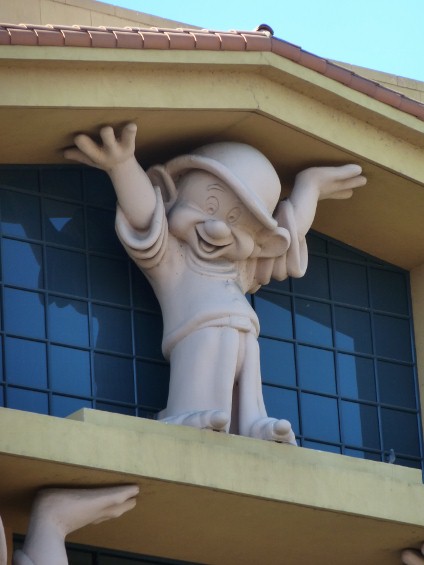 and the Frank G. Wells Building, which houses the Walt Disney Company Archives. 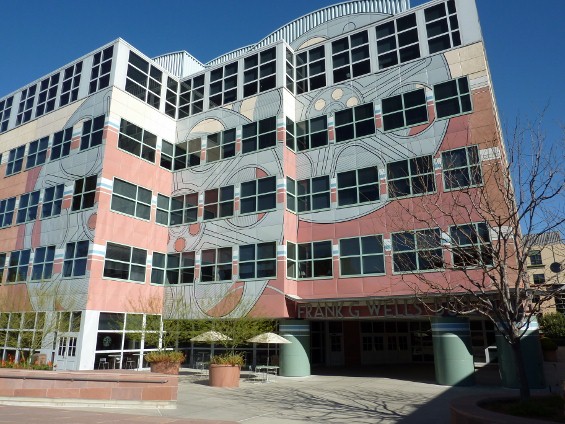 Here in the Legends Plaza, you find the original Partners sculpture of Walt and Mickey, 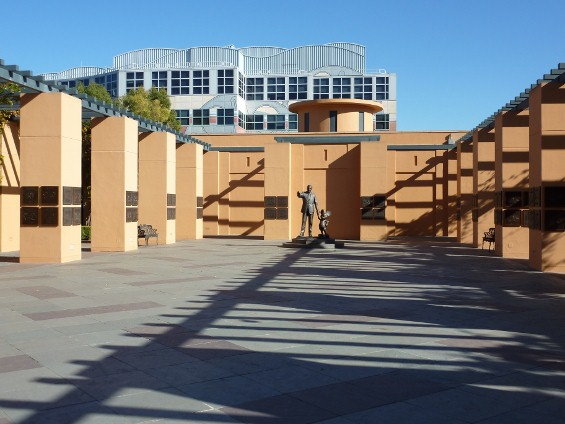 and its companion sculpture of Roy and Minnie on the bench. 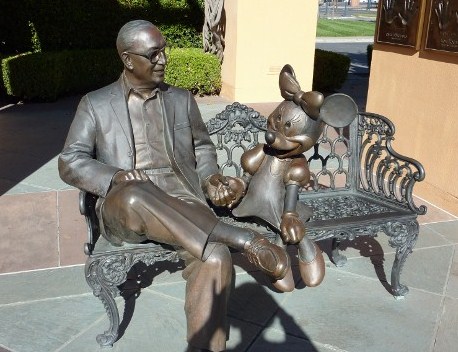 Duplicates of these sculptures, by Blaine Gibson, can also be found in the Magic Kingdom Park in Walt Disney World, while only the Partners statue is placed in the hub of Disneyland Park. There is also a 7 foot replica of the sculpture awarded to those members of the Walt Disney Company that achieve Legend Status. 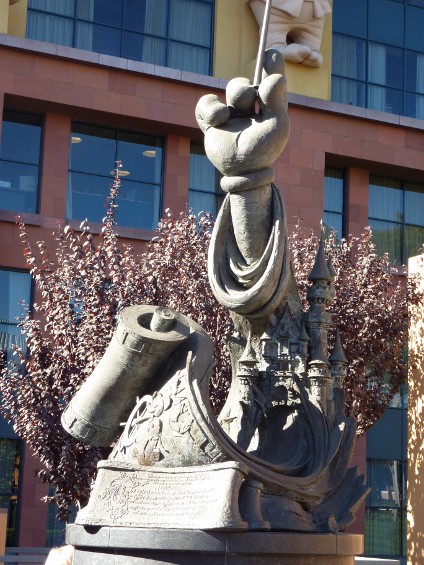 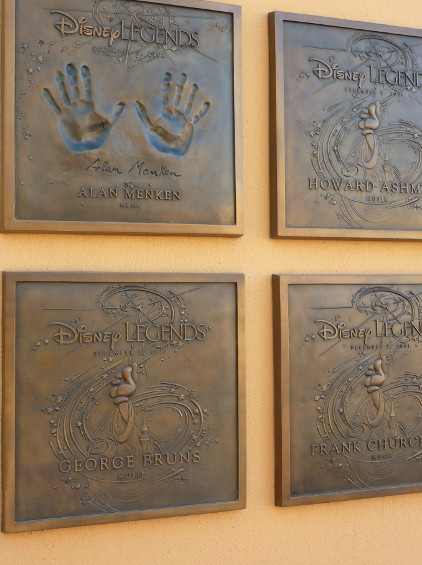 From there, we entered the Frank G. Wells building. The Archive exhibits in the lobby showcase a variety of costumes, 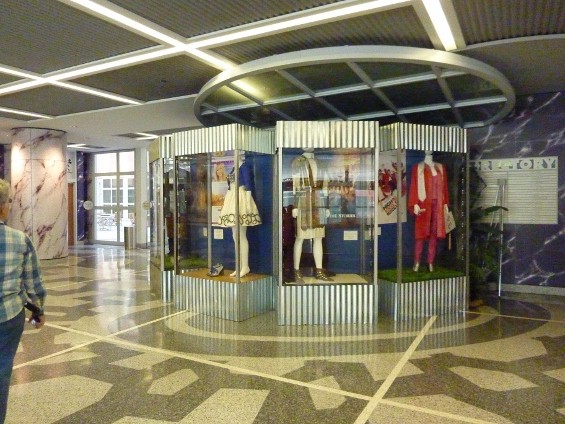 the Hats Off to Disney display (featuring headwear from many classic Disney movies and television shows), 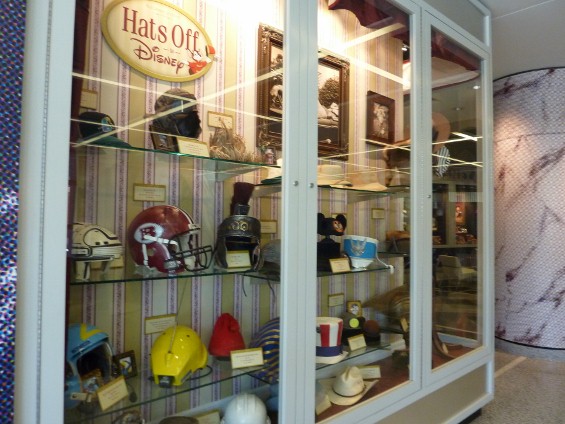 This, of course, included such notable toppers, as the hat worn by Julie Andrews in Mary Poppins! 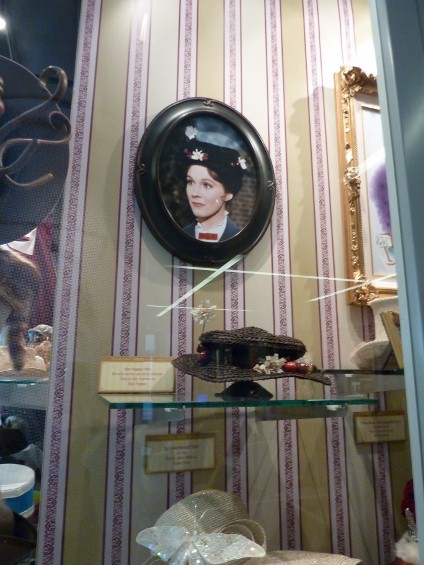 and a range of collectibles. 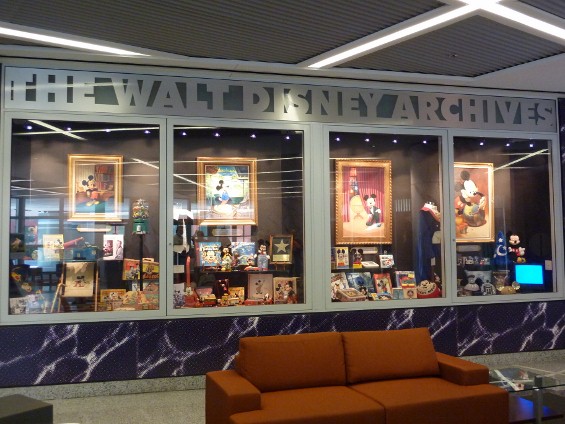 It was a nice tease to what lay behind the locked Archives doors.

We then turned a corner into a bright hallway, which exhibited one of the few existing multiplane cameras, patented by Disney. 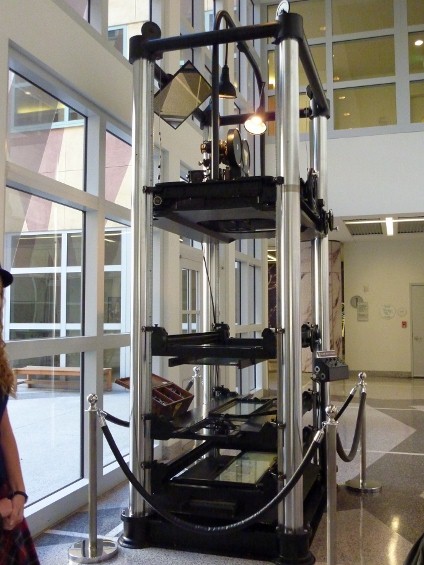 The opposing wall featured an array of interesting exhibits on its development and animation. 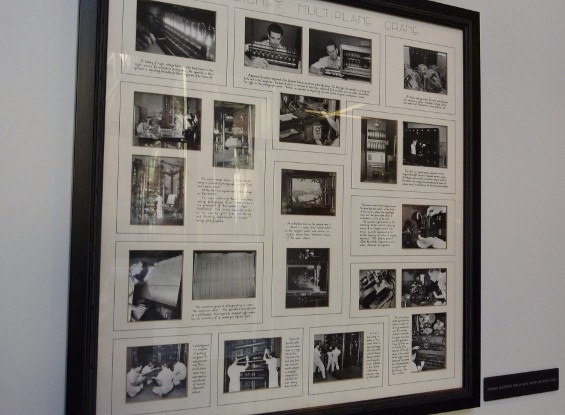 As we walked back to Soundstage 3, we reflected on many of the vital buildings around us that made the Disney company a leader in its industry, such as the Ink and Paint Building. 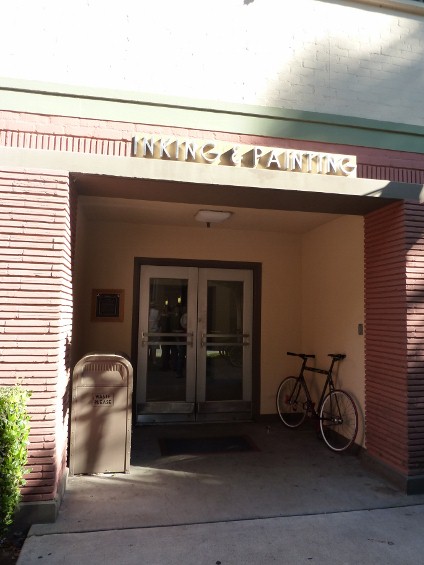 Lastly, we were told to look upward to the top floor of an unmarked building.  In the collage below, it is the one in the bottom center.  The windows, there, gave us the location of Walt’s office – top floor on the right.  A simple view, but nonetheless, an important one. 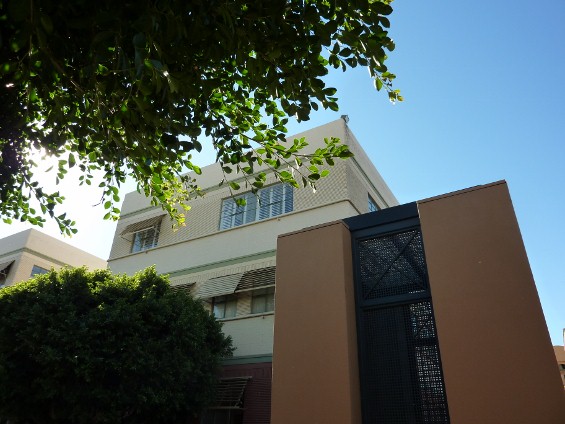 The new Animation Building and the ABC Building were not part of our tour, as they would have required leaving that portion of the lot and crossing the street to the other part of the Studio’s property – the original planned site for Disneyland!  While it would have been wonderful to tour those buildings, we definitely felt that we had already gotten a great value from the surprise tour we had just finished.  What a great way to end a really fun day!