At least the 13,000 princesses running Disney’s Princess Half Marathon were sweating, and if not, it was likely due to the chilly 43° temperature at the start.  Disney had nearly twice as many runners in their second annual celebration of women’s athletics.  “This event is all about princesses and spreading the message of health and wellness to women of all fitness levels while incorporating the glamour and grace of the Disney princesses,” said Disney Sports Area Manager Kathleen Duran. 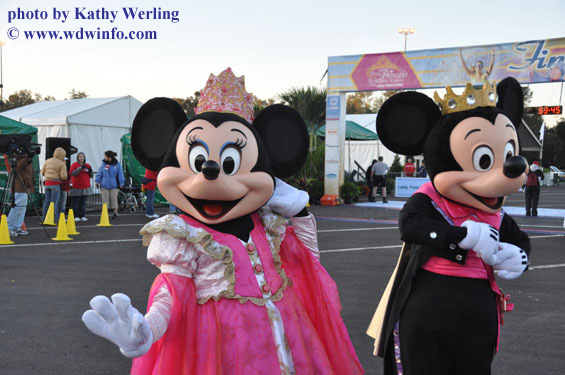 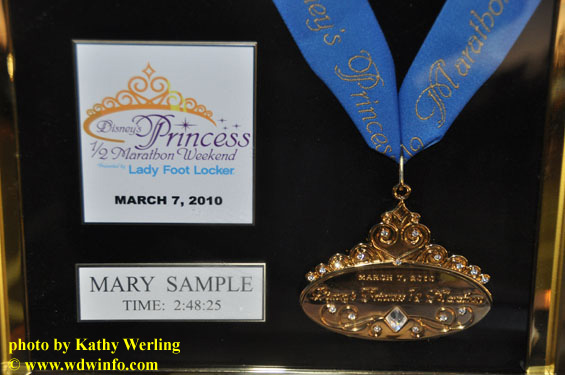 Image: Finisher’s medal earned by all who complete Disney’s Princess Half Marathon

Disney’s Princess Half Marathon was the signature event during the weekend that saw more than 18,000 runners compete in various races that included a family 5K and kids’ races on Saturday, March 6, making the event one of the largest endurance race weekends geared specifically towards women. 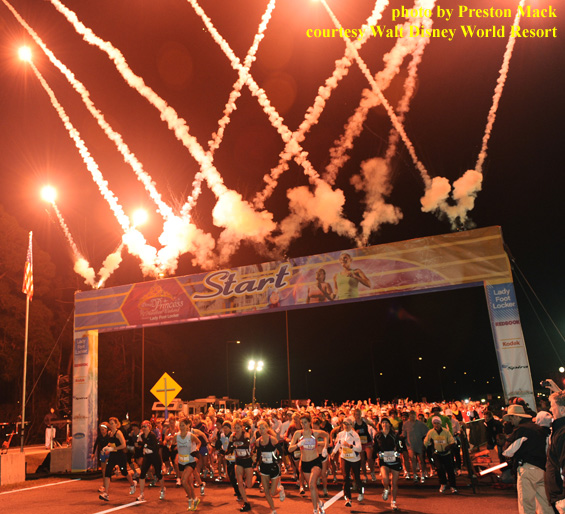 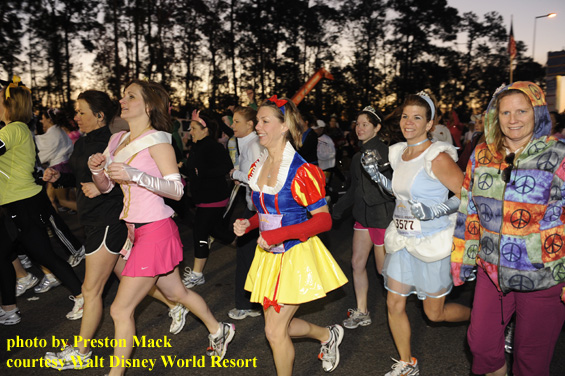 The 13.1 mile half marathon started at 6:00 am on Sunday, March 7 just outside the Epcot parking lot, and followed the same course as the Walt Disney World half marathon in January.  Runners made their way up World Drive to the Magic Kingdom, past Disney’s Contemporary Resort, through the Magic Kingdom theme park, past Disney’s Grand Floridian and Polynesian Resorts, and back down World Drive to the finish line in Epcot.

I asked Mary Jo Collins (DISboards name TnMaryJo) of Lenoir City, TN what brought her back to the same course she completed just two months earlier.  Collins replied, “After the frigid conditions at Walt Disney World during Marathon Weekend in January, I was delighted by the perfect conditions for the Princess Half Marathon.  The highlight was the excellent on course entertainment.  On our way to the Magic Kingdom, all the princesses were treated to a slew of pirates including Captain Jack Sparrow.  With the ‘Pirates’ theme song pumping, I squealed when I saw the pirate ship.  Not too far from the pirates, the song ‘Heroes’ hinted at the princes that awaited our arrival. From Aladdin to Tarzan, the heroic group from Disney animated movies kept the racers excited.”  Therefore, even though the race course was the same, there were plenty of surprises along the way.

Kirstie~Louise (DISboards name syko) of Celebration, FL was the first of three handcrank wheelchair racers to cross the finish line in a little over one hour. 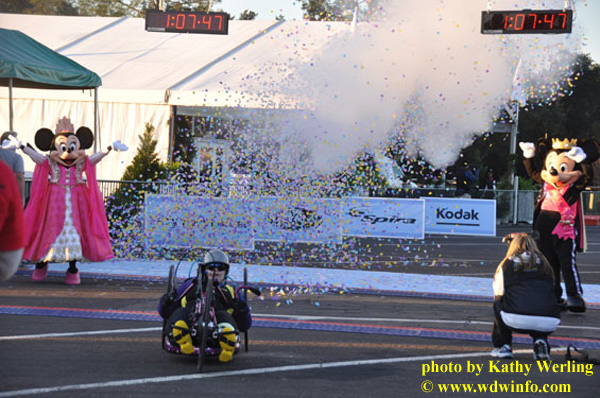 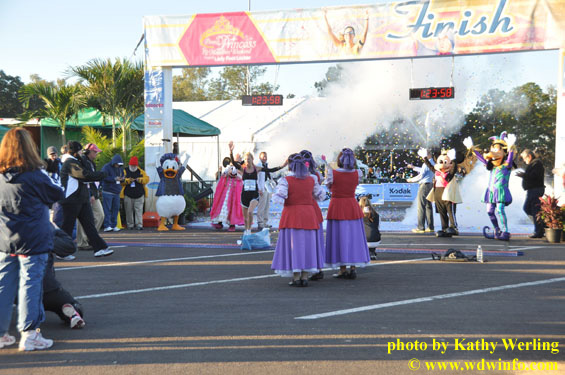 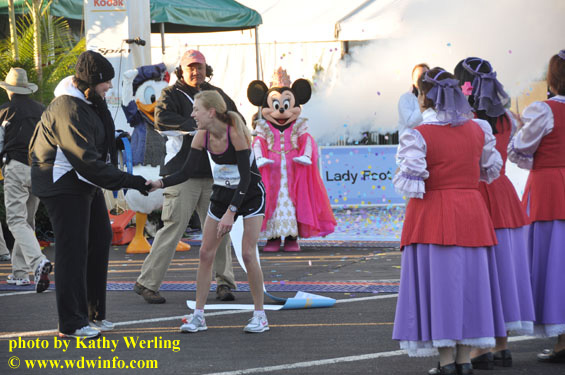 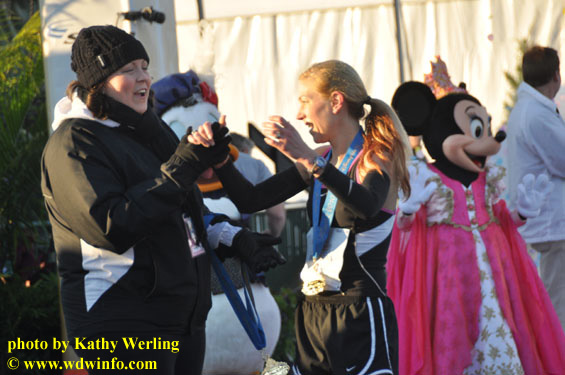 Second place finisher, Heather Schulz (35) of Orlando, Florida was a mere 23 seconds behind the winner, and 4 seconds ahead of third place finisher Nicole Falvo (35) from Grand Blanc, MI – who had led for most of the race until the women entered Epcot for the final mile. 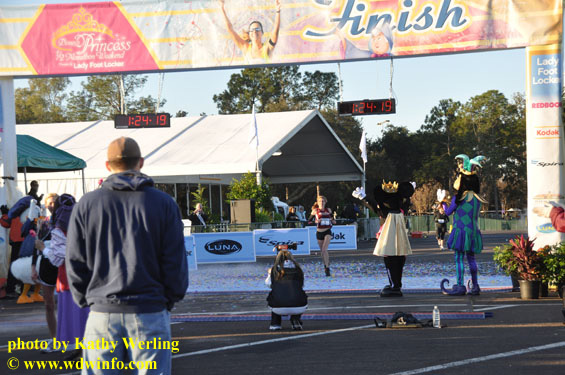 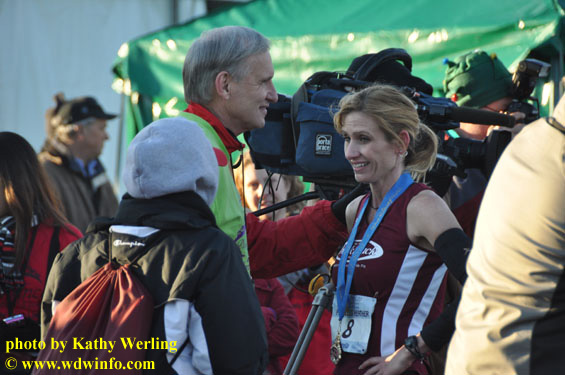 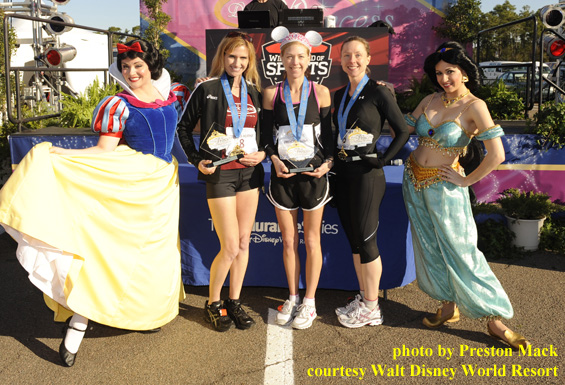 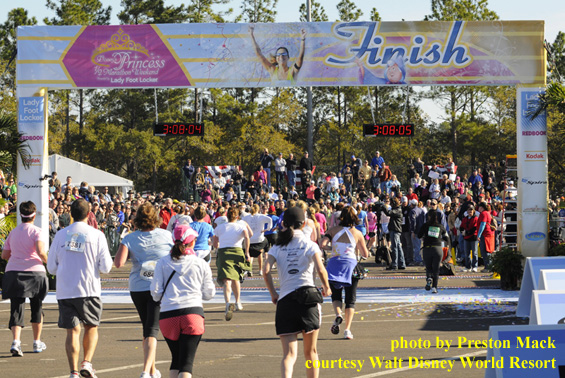 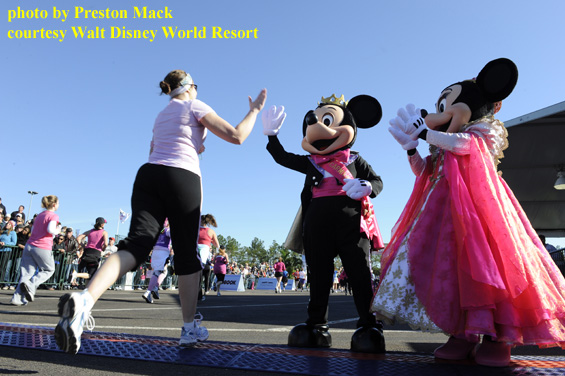 Jennifer Buccigrossi (jbucci on the DISboards) of Medford, NJ summed up her reasons for continuing to run races at Walt Disney World with the following, “Disney puts on a fantastic event that makes you want to come back for more.  There is an excitement and atmosphere that is hard to beat.  I keep going back to Disney for the support from friends in W.I.S.H. (We’re Inspired to Stay Healthy forum of the DISboards), the on course entertainment, and the chance to run through a place I love.  The truth is I love Disney, and the chance to have a family vacation and run at the same time is just too good to pass up.  Walking around the parks wearing a medal and having tons of people congratulate you doesn’t hurt either.”

The big winner of the day was The Leukemia & Lymphoma Society, an organization dedicated to find a cure for blood cancers, and the official beneficiary of Disney’s Princess Half Marathon Weekend.  Upcoming events at Walt Disney World include the Columbia Muddy Buddy (May 8, 2010), Danskin Women’s Triathlon (May 9, 2010), and the IronKids Orlando and Ironman 70.3 Florida (May 15 & 16, 2010).  Next, for Disney’s official Endurance Series is the Expedition Everest Challenge (June 12, 2010), the 5th Anniversary Edition of the Disneyland Half Marathon (September 5, 2010) in California, followed by the Inaugural Disney Wine & Dine Half Marathon (October 2, 2010) – the first half marathon run at night (with a 10:00 pm start) at the Walt Disney World Resort.

Were you one of the finishers of Disney’s Princess Half Marathon?  What was your experience with this Disney race?  Log on with your DISboards username and password to leave a comment below.

Constructing the World of Color at California Adventure
Culinary Quest: A Tale of Two Mexican Restaurants