Constructing the World of Color at California Adventure

The hot talk of the year is definitely the opening of World of Color at Disney’s California Adventure Park this April. It’s a little show. Not much really. It is only touted to be the most hi-tech water spectacular of its kind.  Fountains, music, color, and imagery will come together to tell a tale of Disney heros, heroines, and villains.  If it proves to be anything like other Disney nighttime spectaculars, it will provoke our minds, tease our imaginations, and bring our emotions to the forefront, while we follow the story presented.

With all of the excitement about this new water and light spectacular, I thought it would be fun to go backwards in time and share with you the progress of its construction from Blue Sky concept and model to what is happening today in the park. 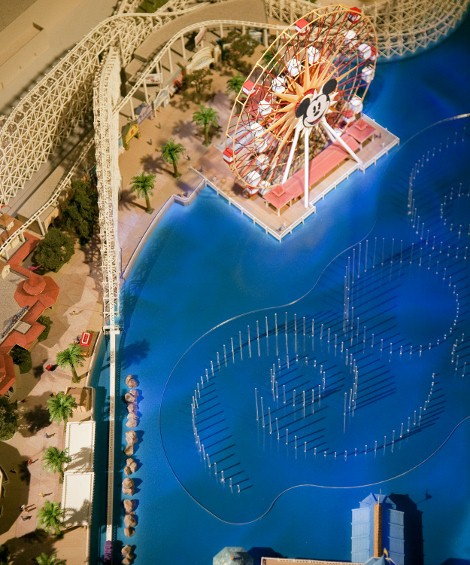 I have to admit, usually I don’t get excited about this kind of thing, but watching the construction of this “show platform” over the last year has been really interesting. Just the steps in the process, trying to guess what each new “bump” will do, have been enjoyable.

The Blue Sky Cellar, in Disney’s California Adventure, has had lots of wonderful concept artwork exhibited for this attraction. As you can see from this photograph – they have really gone all out in visualizing the scenes and even redesigning the whole lagoon area, based on the needs for the show. 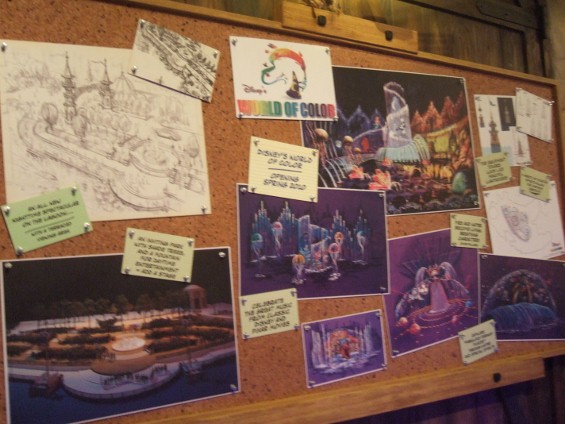 Even the new sculpture that welcomes you to the Paradise Pier has the show in mind.  The “Buoy” is right at the juncture of the path from the Golden State area of the park and the bridges to the Pacific Wharf and Ariel’s Grotto – the perfect location for viewing the new show.  What I was impressed with was the fact that they surrounded the sculpture with 2 tiers of concrete work that can actually be used as stadium seating.  I’m sure this will rank high in popular spots to view the show. 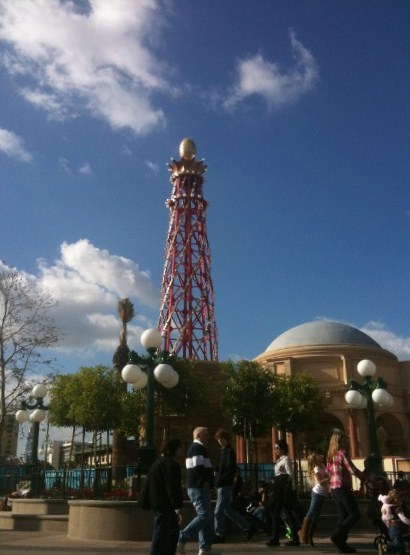 We have discovered new things about how the system works with each visit to the park. For instance: the large light and speaker towers, concealed in the square “pier” columns just along the new viewing plaza, 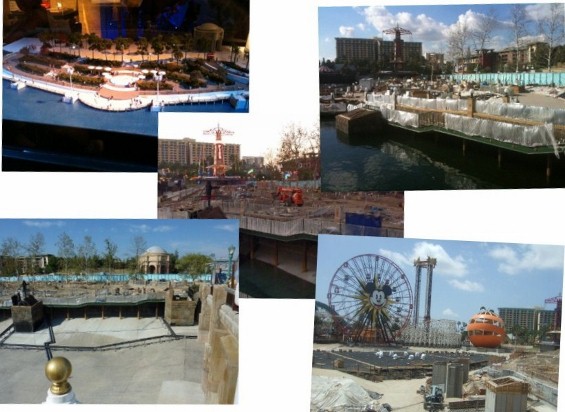 the projection cameras inside the little pinnacles found at the foot of Mickey’s Fun Wheel (notice the white, half-circle fountain heads – for making the water screens, perhaps?), 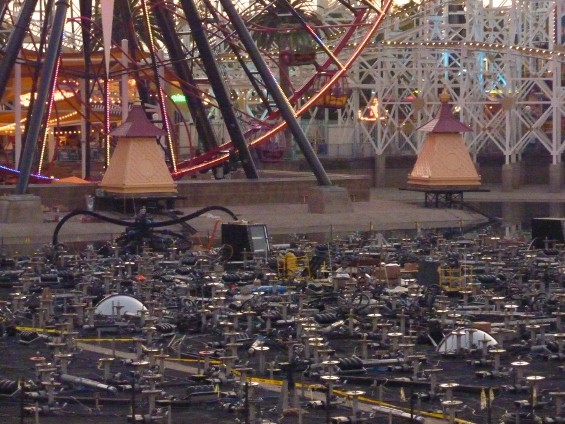 and the production booth, hidden underneath the bridge from the new Pier Sculpture.  Notice the second, new booth that has been added in front of the viewing platform! 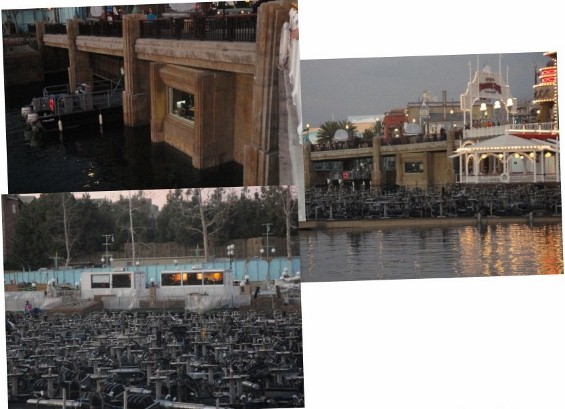 The construction of the platform has been interesting, as well.  You can see how the fountain heads, water cannons, lighting, fire cannons, and other special effects have been added in steps, both before and after the lagoon is filled back in.  The timeline is counterclockwise from the bottom right, with the last photo taken 2 weeks ago. 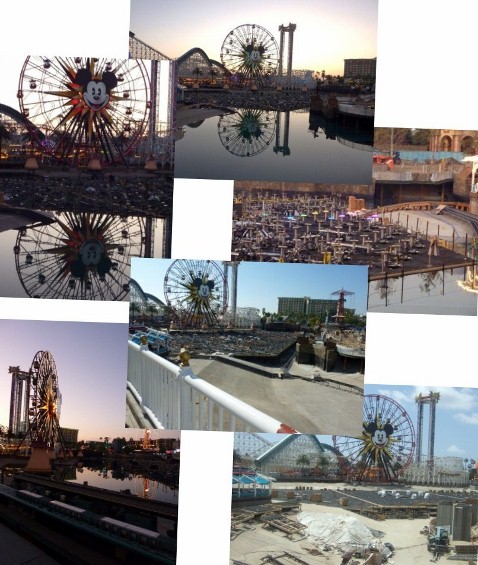 Finally, this photo taken last week shows the latest addition – large circular heads that look as if they are for lighting effects. 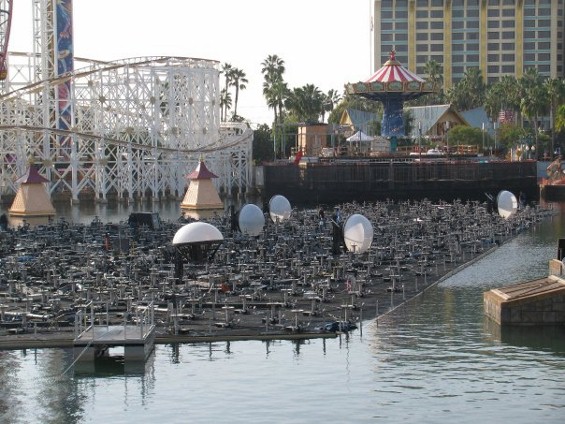 Disney has been showing teaser videos on its blog at http://disneyparks.disney.go.com/blog/, where you can see the testing of the fire cannons and the colored lighting effects.  I don’t usually buy into the viral marketing, but I have to admit, I’m extremely intrigued about the final product, especially when they are showing artwork samples such as these for the final visuals to be produced. 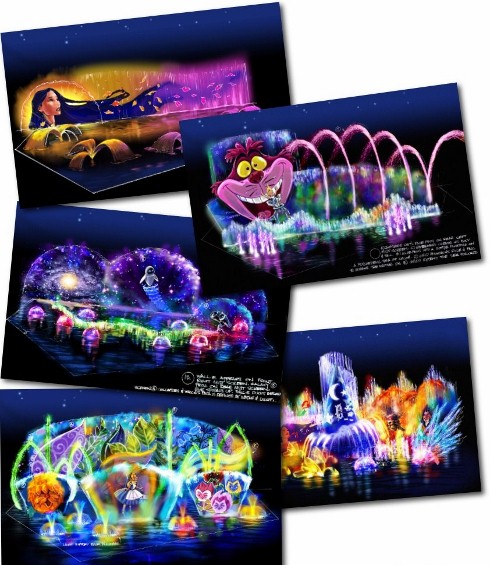 From the concept art, we know that the show will feature music and visuals from such classic Disney and Pixar films as Alice in Wonderland, Fantasia, The Lion King, Finding Nemo, Pocahontas, and Wall-E, just to name a few.  The key to success is in how Disney will knit such a variety of tales into one seamless show.

From everything seen, this will definitely be the highlight of the park and Disney is hoping it will draw the crowds it has wanted for this park for so long. All I can say is that it has truly been exciting to watch it all come together and I look forward to seeing it live myself!