Runners from all over the world are making their way to Orlando, FL as Walt Disney World Marathon weekend is upon us with a whole slate of races on tap from Friday, January 8 to Sunday, January 10.  More than 55,000 runners are registered to compete in one of the races – making it one of the largest running weekends in the country (second only to Arizona’s Rock ‘n’ Roll Marathon weekend in 2009).  In addition, there are new ticketed events this year including a carb-loading pasta dinner at Epcot on Thursday, January 7.  The “Pasta in the Park Party” includes a pasta buffet at the World ShowPlace Pavilion and special seating to view “IllumiNations: Reflections of Earth”.  Also new is a private post-race party at Disney’s Hollywood Studios called the “Victory Lap Celebration” that includes a DJ, Disney Characters, cash bar, food vendors, and access to attractions.  For those wanting a course preview, I include a mile by mile account of my running of the Walt Disney World Half Marathon in 2009 after the break.  Continue on to read more about this year’s event, and listen while I participate in the race. 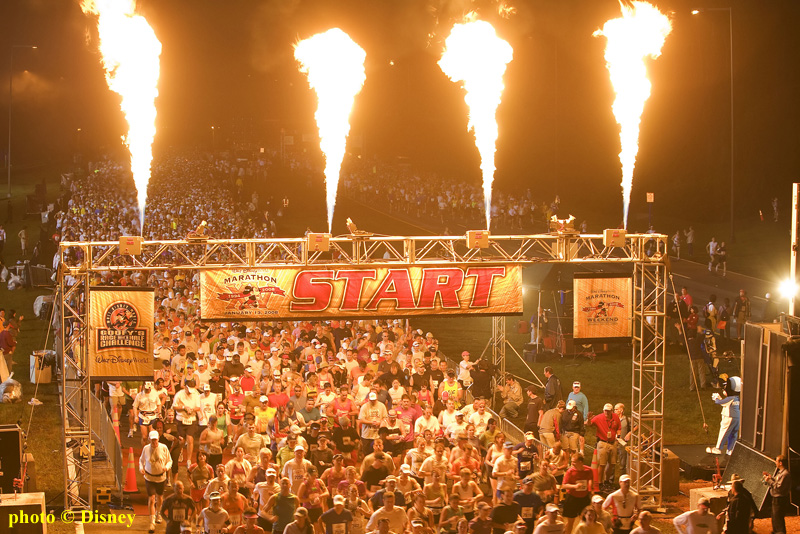 Almost 24,000 athletes are registered for the full marathon (26.2 miles) and more than 23,000 are registered for the half marathon (13.1 miles) – the two signature races.  7,500 athletes have filled “Goofy’s Race and a Half Challenge” to capacity – requiring runners to complete both the full and half marathons (39.3 miles) in consecutive days.  Defending men’s champion, Brazilian Adriano Bastos, returns to attempt to win his sixth straight Disney Marathon. 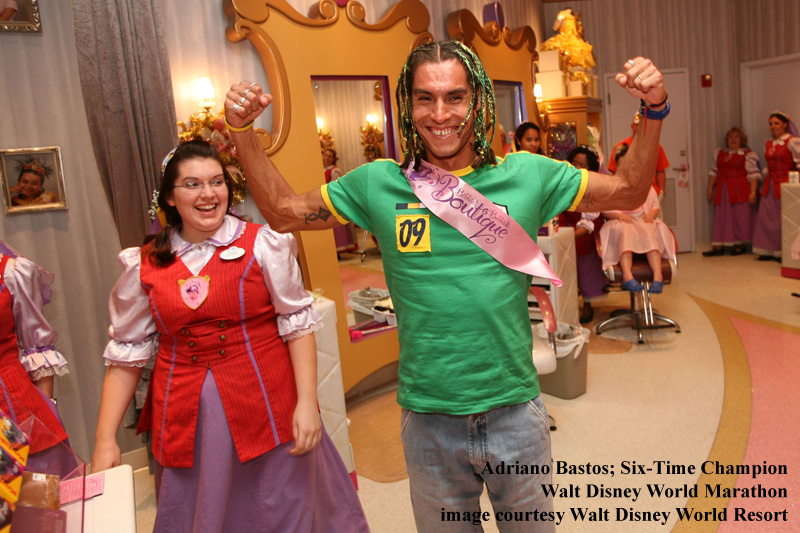 The 2010 half marathon course has not changed since last year, and you can listen and read my mile by mile account recorded while running the 2009 half marathon. 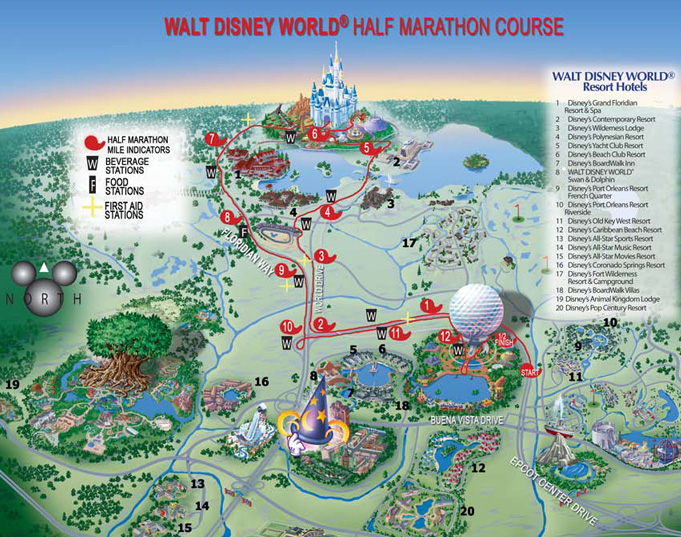 Race day comes early at Disney.  3:00… 3:00… am… and I was awake.  No, not because I could not sleep the night before the race.  It was because the starting gun goes off at 5:40 am, and runners are required to board the buses by 4:00 am to get from your resort to the starting line at Epcot.  Usually around this time in the morning you start wondering, “Why did I sign myself up for this?”  By 4:00 am I was dressed and ready to head out the door for the starting line. 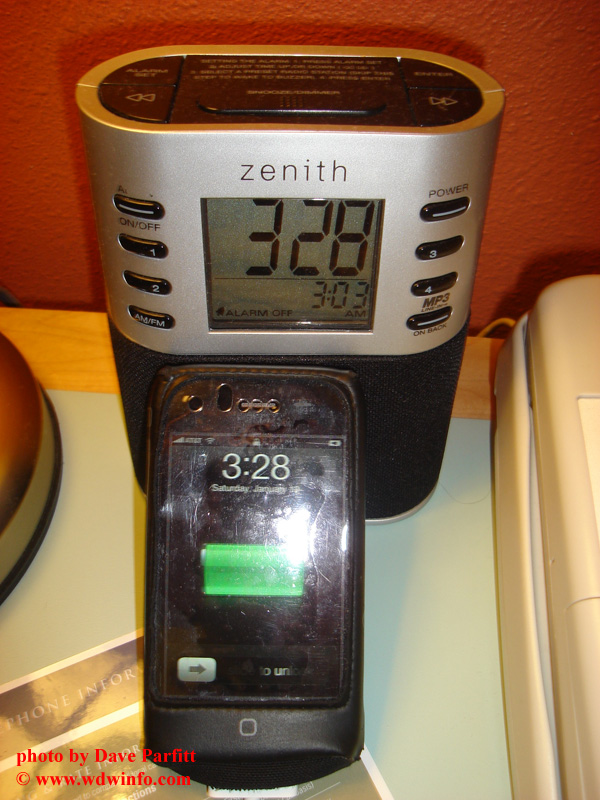 Runners were dropped off in the Epcot parking lot by 4:30 am.  It was a warm morning, the sun had not risen yet, the skies were clear, and there was a huge, bright full moon lighting up the sky.  I joined the 17,000+ runners waiting for the start of the half marathon.  It was a bizarre scene that early in the morning at a Disney theme park.  There was an 80’s cover band entertaining the crowd at “Club Zero” (get it? the starting line was the zero mile point).  The runners for the most part were trying to wake up, get a little food in their stomachs, and get ready to run. 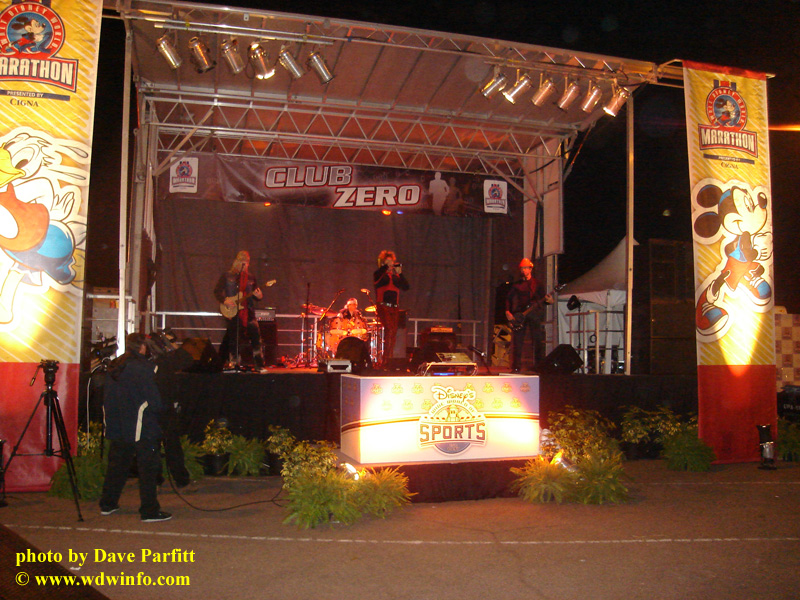 You walked from the Epcot parking lot to the actual starting line in a backstage area.  It was about a mile walk, a long walk that you needed to give yourself time for, and it was getting cold…  5:35 am, and it was 5 minutes before the start of the race.  Mickey Mouse, Minnie Mouse, Goofy and Donald Duck all mounted the stage dressed in their matching blue track suits.  The national anthem was sung.  Three… two… one… GO!!!  Fireworks and flames shot out of the framework stretched across the starting line.  Runners had started!  The race had begun!  Now it was time… to… stand… three minutes later, I started to run, and crossed the starting line.  I met a couple friends from the W.I.S.H. (We’re Inspired to Stay Healthy) forum of the DISboards: Cindy (DISboards name CynthiaCindy) and her husband Matt (DISboards name StichAttack) from Washington DC.  They were competing in Goofy’s Race and a Half Challenge, and we all settled into a very relaxed pace. 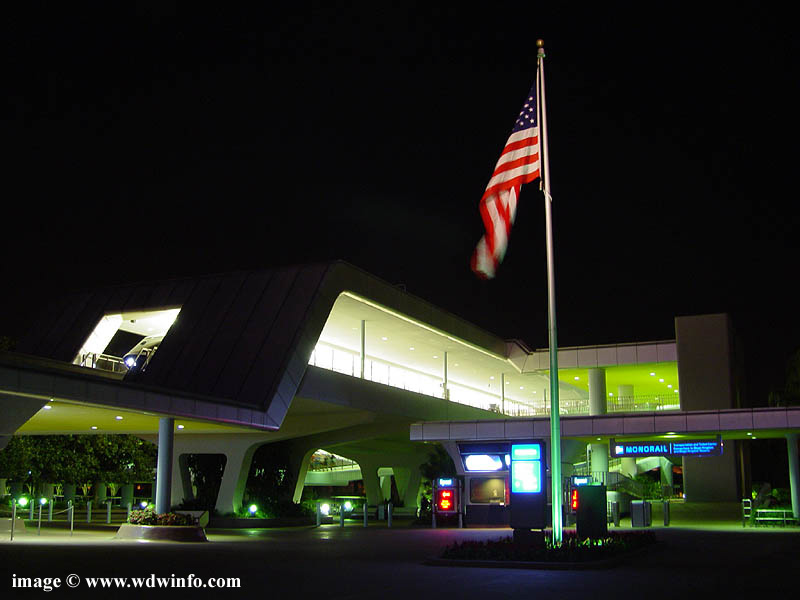 The half marathon began on Epcot Center Drive, and followed the parking lot for the first mile.  You could see thousands of people strung out in front of us in the cold and dark early morning.  The first water stop was between miles 1 and 2, and many of my running friends from the W.I.S.H. forum passed out water and Gatorade at the stop.  Most of the W.I.S.H. volunteers were either running the full marathon the next day, or they were supporting their fellow running friends and family.  Two miles into the race, and we made the turn north onto World Drive to head towards the Magic Kingdom.

As we ran north, we passed under the parking gates to the Magic Kingdom.  I started to watch my step because I nearly tripped over a speed bump (guess I was running too fast).  We reached the second water stop as we passed the Richard Petty Driving Experience, and continued through the Magic Kingdom parking lot.  A DJ kept the runners entertained, and you were quickly upon the fourth mile marker.  You ran down the hill where the tram goes under the road on the way to the Ticket and Transportation Center, and crowds had gathered to cheer on the runners.  We continued towards Disney’s Contemporary Resort, and under the Seven Seas Lagoon.  After you passed under the Lagoon came the only hill on the course, “the Contemporary Hill”.  Not much of a hill to speak of, and the Contemporary Resort appeared to your right as you passed mile 5.  Right smack in front of you was an incredible view of Space Mountain, and the Magic Kingdom was getting very, very close. 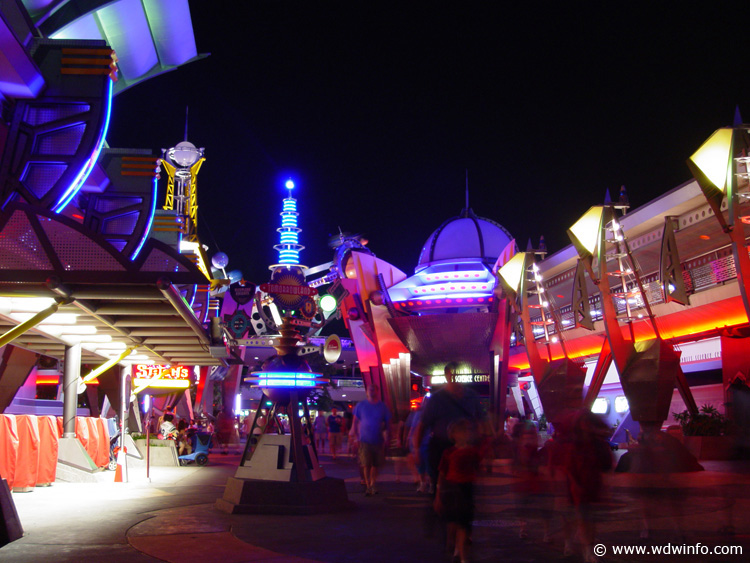 Next, you reached a special parking lot behind Main Street USA, and entered the theme park by Tony’s Town Square Restaurant where Cast Members greeted you with “Welcome to the Magic Kingdom!”  This was why you paid your money to run a Disney Race – the moment of running down a lit Main Street with Cinderella’s Castle in front of you and wall-to-wall people who cheered for you – it was enough to give this runner goosebumps.  You quickly reached the Hub, and made a right turn into Tomorrowland.

Funky, electronica, dance music blared from speakers in Tomorrowland.  Surprisingly, there was still no line for Stitch’s Great Escape as you ran past.  Chip and Dale in their Astronaut moon suits rooted on runners, and we turned towards Fantasyland where the Mad Hatter and Alice also cheered near the Enchanted Grove.  We circled past the Tea Cups of the Mad Tea Party, and the Many Adventures of Winnie the Pooh was on our left where Piglet waved.  Even at this early hour, all the attractions were running and lit: Dumbos flew through the sky and Carousel horses bobbed up and down, round and round.  Another highlight was running through Cinderella’s Castle with Cinderella’s wicked Stepsisters watching.

Large crowds of spectators were at the Hub as you exited Cinderella’s Castle and made a quick turn into Liberty Square.  Mile 6 awaited us right over the bridge leading to Liberty Square, and Goofy, Donald and Mickey dressed in Colonial costumes from the Liberty Tree Tavern gave a hearty “Huzzah!” as we passed.  Next up was Frontierland, the Country Bears were out in front of the Country Bear Jamboree, and the Hoop Dee Doo Players were brought over from Fort Wilderness to cheer us on by the Diamond Horseshoe Revue.  We ran past Splash Mountain, and into a backstage area of the Magic Kingdom where the parades step off.

Backstage behind Frontierland, were parade floats including the Pirate Ship from the “Enchanted Adventures Parade” with Captain Jack and his band of pirates on board.  I was looking for a rum stop at this point, but, alas, none was found.  We exited the Magic Kingdom and neared the 7 mile marker. 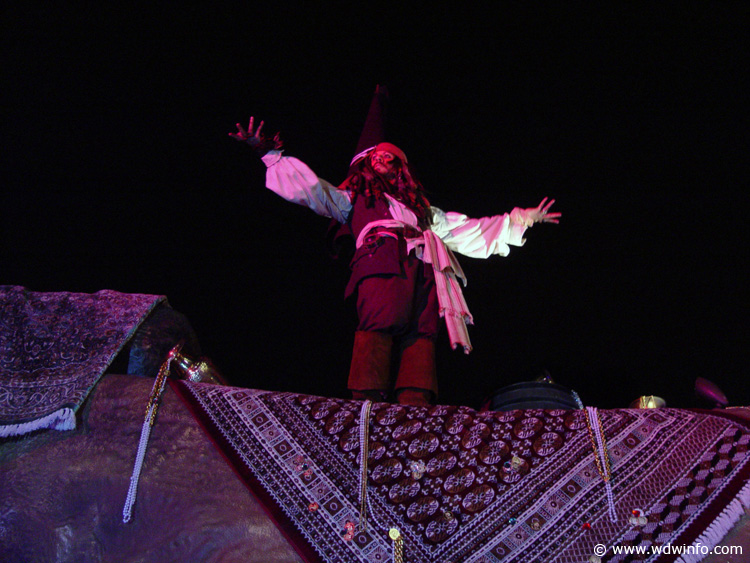 We passed Disney’s Grand Floridian Resort, and had a lovely view as the fog rose off the Seven Seas Lagoon.  Mary Poppins and Bert the Chimney Sweep were out in their park finery as the runners around us sang “supercalifragilisticexpialidocious” (not easily done after running 7 miles).  We ran down Floridian Way past the Wedding Chapel and Disney’s Polynesian Resort.  There were large crowds gathered near the Polynesian Resort, as this was an easy place for spectators to view runners at multiple places on the course.  There was a food stop with energy gels just past the 8 mile marker near the Polynesian Resort.  We raced past the other side of the Richard Petty Driving Experience, and the ninth mile was in the books.  When we came to the water stop at the 9 mile marker, we were greeted by more running friends from the W.I.S.H. forum volunteering at the stop.  It was so encouraging to see friendly faces on the course.  We had now turned back onto World Drive heading south towards Epcot and the finish line.

The fish icons of the Walt Disney World Dolphin Resort rose off in the distance as you ran down World Drive.  There was not too much to see on this stretch, and before you knew it you had reached the 10 mile point of the race.  We ran under Epcot Center Drive, and spectators cheered us on from the overpass above our heads.  We looped onto Epcot Center Drive, and headed back to Epcot – 11 miles were now completed.  Now it was time for the final push to Epcot – you could see the parking gates to Epcot ahead of us.  We ran underneath the monorail tracks while the Pink Monorail passed overhead.  Spaceship Earth was right in front of us, there was the 12 mile point, and as we passed through the parking lot a friendly Cast Member yelled, “I hope you remember where you parked!” 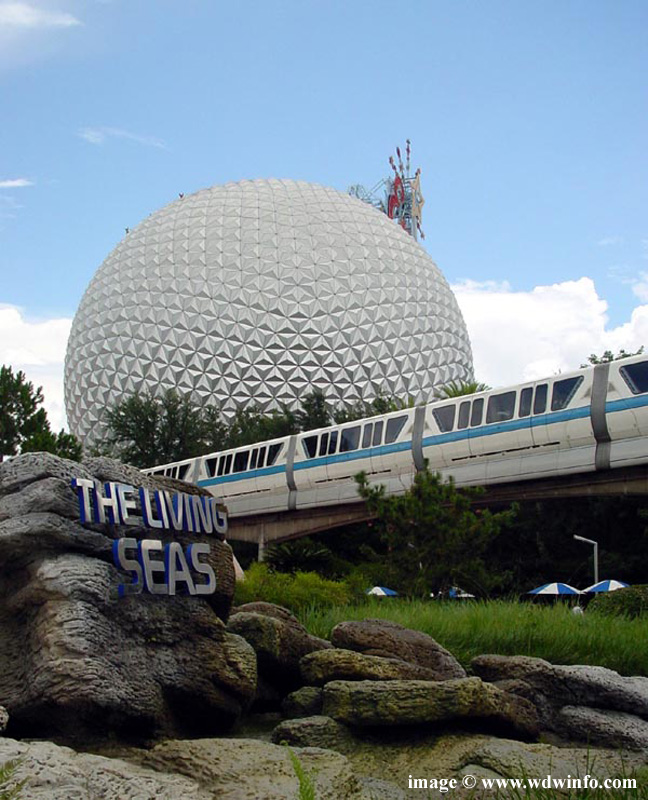 We entered a back entrance to Epcot near The Seas with Nemo and Friends, and we were finally in Epcot and almost done!  We ran through Future World to the Fountain, and towards the World Showcase.  Once we reached the World Showcase, we were greeted by a number of characters including Robin Hood, Little John, the Hunchback of Notre Dame, Pinocchio, Geppetto, and Aladdin.  We turned around and headed back towards Spaceship Earth.  We eventually ran right under Spaceship Earth, under the monorail tracks, and we exit the park.  We rounded the corner backstage where a Gospel Choir sang as we passed mile marker 13 – one tenth of a mile to go!  The crowds thickened as you could see the finish line and characters lined the home stretch: Chip and Dale, Jiminy Cricket, Lilo and Stitch.  We crossed the finish line, and we had completed the Walt Disney World Half Marathon.

I was able to run with my friends Matt and Cindy the entire way, and we all felt incredible at the finish.  Cindy described it as the “most fun half marathon ever.”  We walked a little further to see the racks and racks of finisher medals we had earned, and a volunteer placed a medal over our heads around our necks. 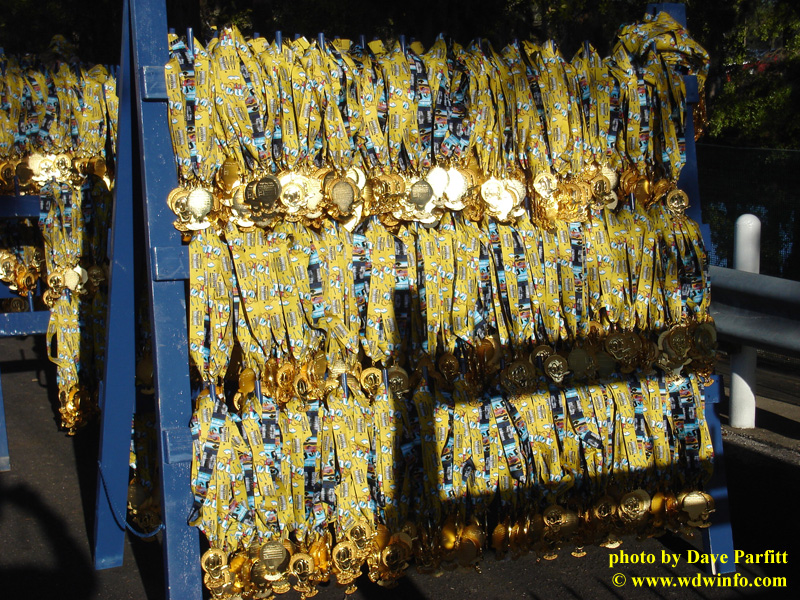 After the race was over, we grabbed water, Gatorade, fruit, and food.  A party atmosphere filled the Epcot parking lot as runners awaited their friends and family.  The 80’s cover band was going strong at Club Zero, and finisher pictures could be taken with multiple Disney Characters. 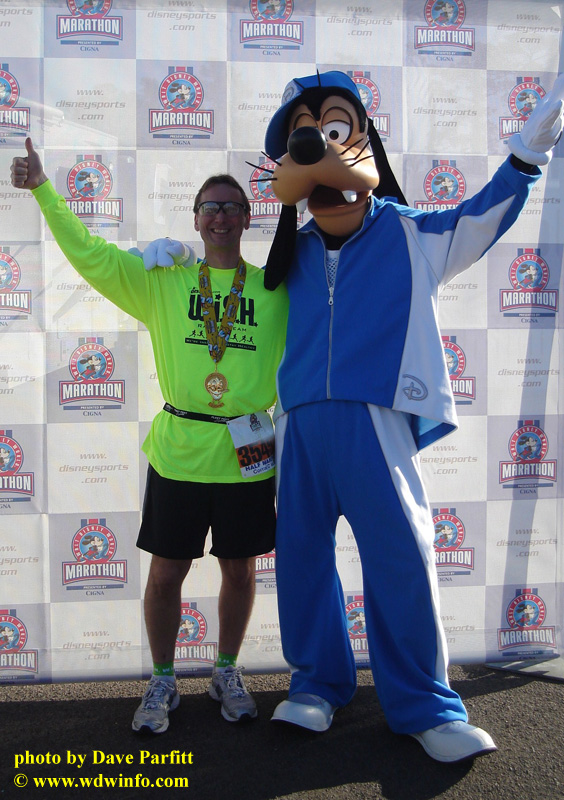 When it was all said and done, this medal was your reward for running and finishing the Walt Disney World Half Marathon.  Was it worth it?  Each runner has to judge that for themselves, but, for me, it was definitely worth it. 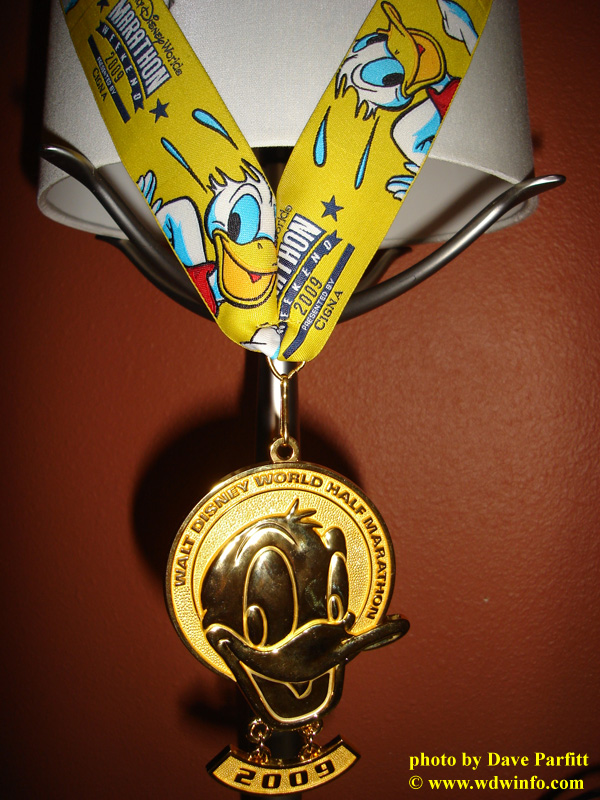 I would definitely recommend this Disney race.  It was so much fun, and would be fun for any Disney fan.  The race was welcoming to runners of all abilities, and is a chance to let your inner child go and have a good time.  Have you run in the past?  Are you planning on running this year?  Log in with your DISboards username and password and leave a comment with your experience.