Pride! Honor! Jubilation! Those are some of the feelings and emotions that are found anywhere you go, when a local hero comes back to his or her home town. You know, that is exactly the feeling I found when visiting Disneyland’s New Orleans Square this weekend. With the arrival of Disney’s First African-American Princess, Tiana, and her Prince, Naveen, to her home town (and bringing with them Tiana’s Showboat Jubilee), this area of the park is buzzing with an excitement that Disneyland hasn’t seen in quite a while – it’s almost infectious!!!! I think that sense of hometown pride is what really sets Tiana’s arrival in this park apart from any other Disney park. It’s almost something that has to be experienced, so let me give you a glimpse of the joy we saw and felt…. 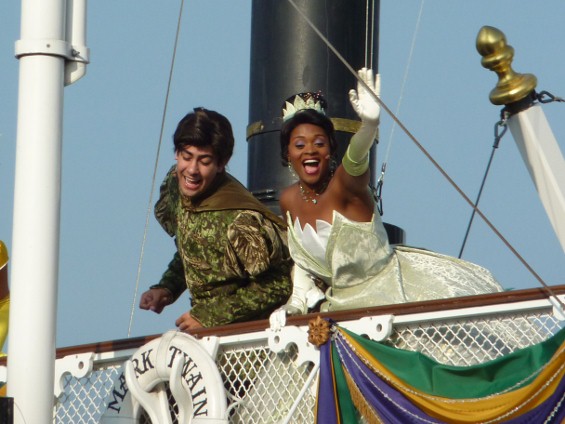 New Orleans Square is typical of the architecture of the Big Easy – full of interesting nooks and crannies that bring discovery. The Court of Angels is one of the most picturesque of all of them. It has been one of the most popular family photo spots in New Orleans Square since its inception, with a large curving staircase and inviting brick and ironwork. It seems only natural for them to choose it as the home for Princess Tiana and Prince Naveen’s Meet and Greet. 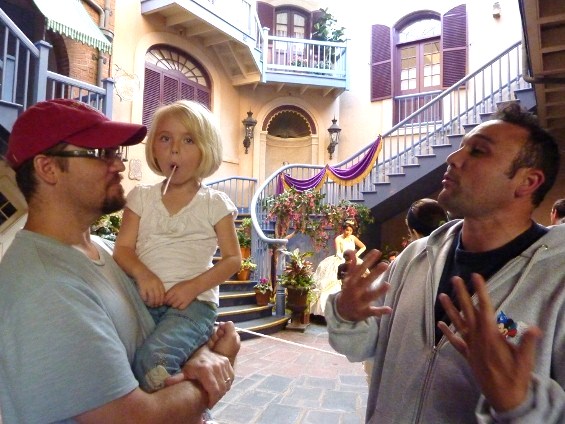 The Court of Angels has a perfect secluded entryway and the fortunate existence of a shop that serves as one of its two exits. Needless to say, that shop (which once sold Christopher Radko glass Christmas ornaments) now features everything for a little girl to become the princess herself! My favorite item in there is Tiana’s Cookbook – Recipes for Kids. For a Disney cookbook collector – this is a must have, as it ranks up there with all the other beautiful cookbooks. The fun part is that you can buy it and then go have Tiana autograph it – any day of the year!!!!! How often can you say that about other cookbook authors? 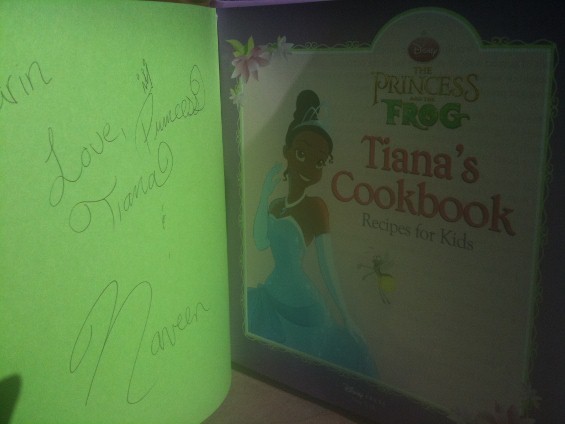 Tony, Mary Jo, and I took my family to see the new princess. We were pleasantly surprised at the fact that we were going to meet both Tiana and Prince Naveen. The queue is tight, as it winds through back and forth through a large archway to the courtyard. This means no strollers in the queue. The location does give the character wranglers two other pleasant access entrances that wheelchairs or moms with sleeping stroller babies can use, so that was handy for me to wait with Sleeping Lily and still see what was happening. As the queue winds back and forth under the archway, the excited guests get glimpses of the couple. Tiana wears her signature ballgown – which, under close inspection, is a lotus/waterlily flower and lilypad! Frankly, it’s genius costume design, simply genius! 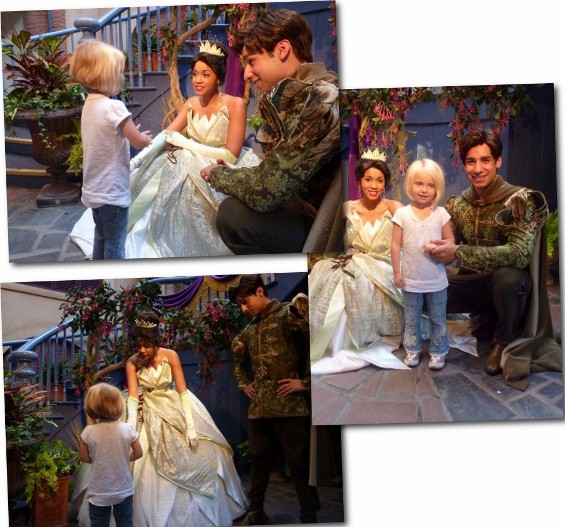 We finally got to the front of the line and met the royal couple. Can I just say that we were extremely impressed with them?! They worked together to make the experience so full of Southern hospitality! We spent quite a bit of time with them and I found that they were very willing to converse. It was refreshing see that they were not rushing us along and the fact that Tiana doesn’t have linguistics and mannerisms that are as “lofty” as the other princesses makes her much more approachable and conversational! Of course they took pictures with my oldest daughter, but we had to have them do one of Tony and myself – after all, it isn’t every day that Tony – the boy dad – gets to stand in line for princesses!!!! 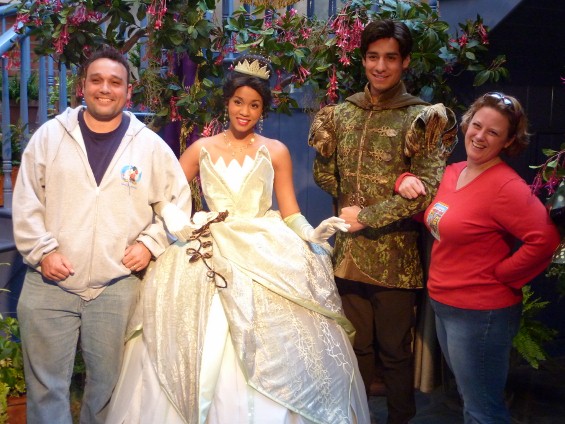 As we finished, we saw that Tiana and Naveen had to rush off – they had a performance to do! We decided that we should also head down to the river levee and grab a good spot for Tiana’s Showboat Jubilee! 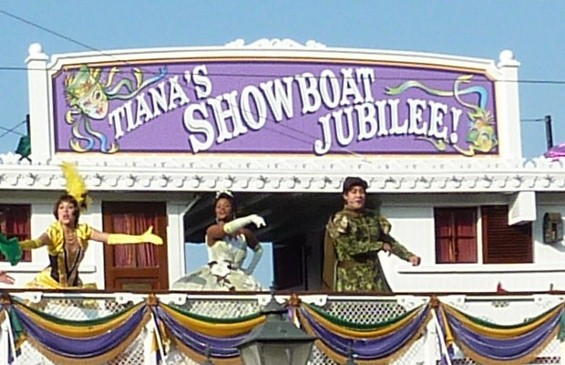 Disneyland’s New Orleans Square has always been a fairly vibrant and raucous area – from its incredible jazz bands and singers, to the bead-throwing, musical processionals they host on occasion. However, with the addition of the Jubilee, the party has just seemed to grow grander, and at the same time, brings an intimate charm to the park guests. The Jubilee starts simply in the streets of the Square – back at the Angel’s Court stairs. Colorful performers, as well as the Prince and Princess, slowly ease out of this quiet corner and onto the streets. 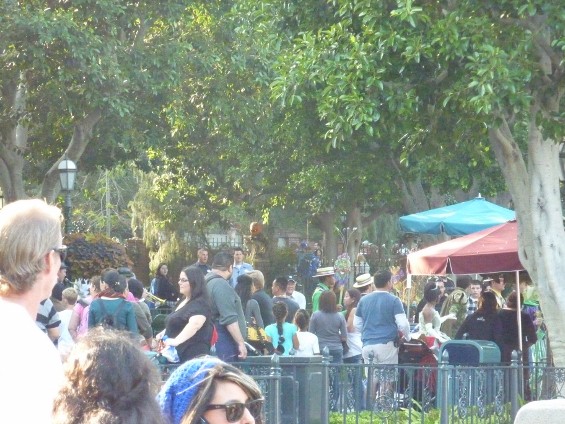 Once there, the upbeat music of “Come On Down” starts as the band begins to play and the singers join in. The processional immediately pours out of the Square to the River and crosses through the middle of the gathering crowd. 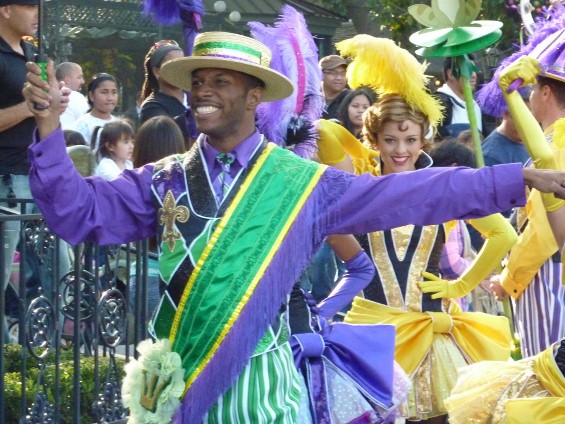 For further reference, they pass right along the second level of river walkways/Fantasmic viewing (right where the Dessert Party seats are laid out). This is also the tier where several folks in black clothes and possibly Fantasmic jackets) are standing to operate sound systems and show production equipment. They are pretty obvious if you know what to look for…. 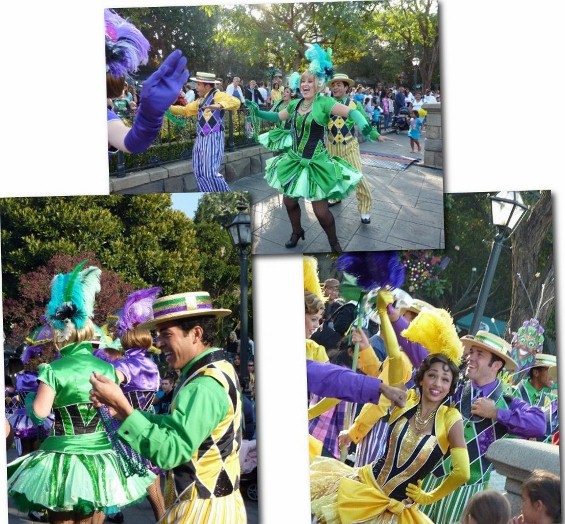 In my opinion, the best place to watch the show is right next to these operations folks. The Showboat stops for the main performance right in front of the Cafe Orleans restaurant. If you watch from the water’s edge of the levee, you will be closer to the boat, but you’ll have a crick in the neck and be stuck in the middle of the crowd. If you go up to that narrower 2nd tier, you’ll be right on the fence and level with the middle of the boat. Not to mention having Tiana, Naveen, the band and those parade dancers pass right next to you, giving you a personal greeting! I even had a horn player give me a wink! 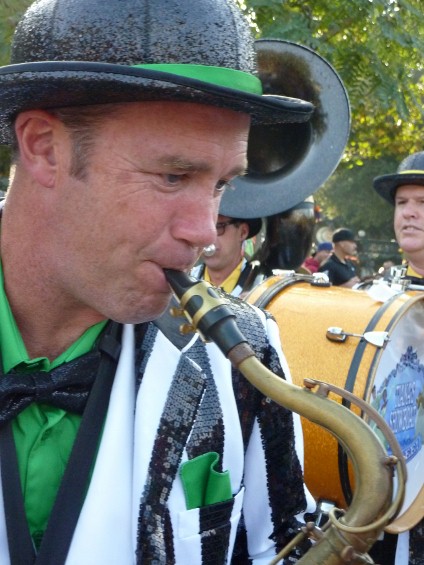 From this vantage point – and one of the things I think is a wonderful tribute to the intimate design of the area – you can see the entire processional as it dances down and boards the showboat! 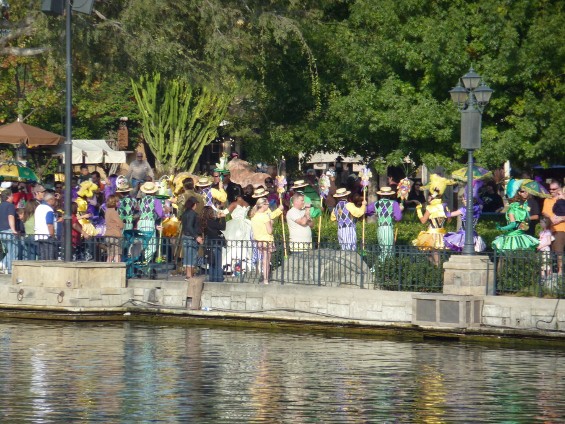 This was a lot of fun for the kids, especially as they could also see the volunteer guest performers waiting at the back and getting their instructions – a surprise to the main crowd waiting! 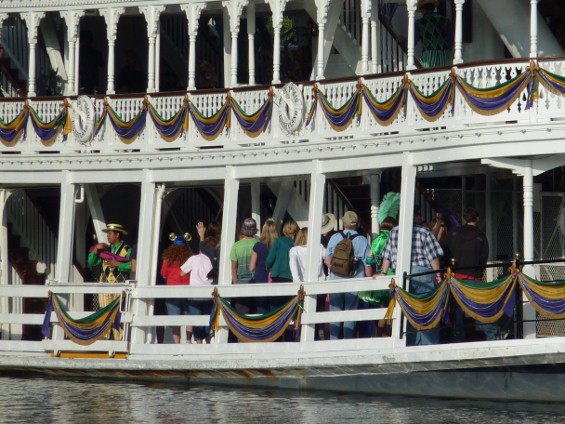 “Hold on,” you say, “Guests in a show?” “Volunteers?” “How do I get a piece of that action?” you ask? Now let me stop a minute and talk about what I know on this topic (courtesy of my curiosity, of course). Well, what I didn’t tell you about, while waiting with the sleeping stroller child earlier, was that I saw a handsome man in an obviously New Orleans parade costume (green and purple silk stands out a little from the Jeans and Mickey shirt crowd…). 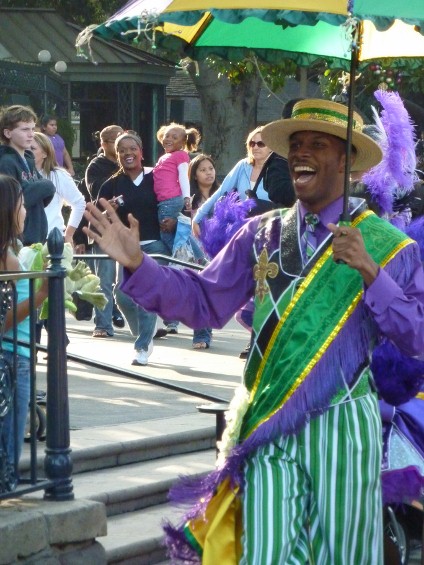 It was about 15-20 minutes before showtime. He and one of the girls were headed down to the river. I stopped him and asked what the requirements to get into the show were for a child – you know Zoe jumps out at every volunteer instance… He told me that they children needed to be a little older – around 7 is a start – and taller. The crowd needs to be able to see them over the railing of the ship. They also need to be able to follow directions and handle props. I thanked the gentleman, as he had to run off, and realized there was still more information to be gleaned. Those answers came to us from the two ladies next to us at our show-viewing point. They were wearing these interesting Mardi Gras beads that read “Tiana’s Showboat Jubilee”! 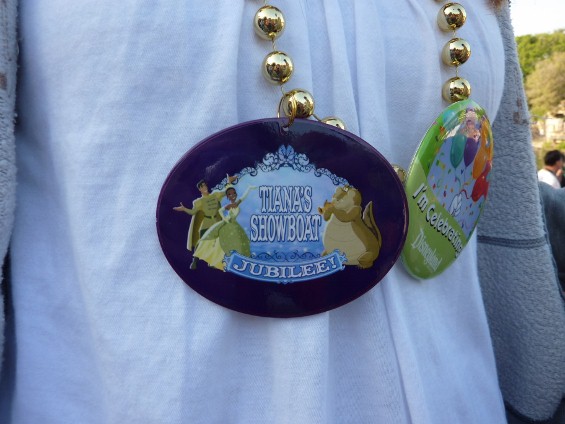 Of course we were nosy and Mary Jo went quickly to work. Turns out they had been in an earlier show that day. They saw a colorful Cast Member by Pirates about 45 minutes before the show and went to investigate. They received tickets to present at the Mark Twain Riverboat about 20 minutes before the show started. There, they were gathered together by their instructors and given directions. About 5 minutes before showtime, they boarded the boats and were given their final training and first props. Instructions went on during the processional parade and when it comes to the river boat, the boat pulls out of the dock….. 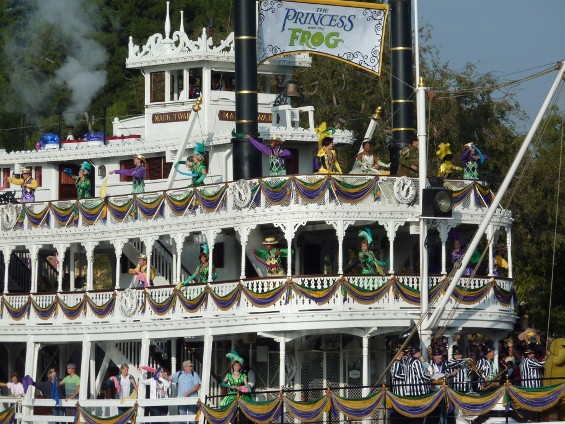 Once they board the showboat, the choreography to “Goin Down the Bayou” is very well designed. Louie the alligator joins the band on the prow and Tiana and Naveen take their place on the top center balcony. One of the things I love about our Mark Twain, is that the top deck is open and it makes it very easy to see the performers. 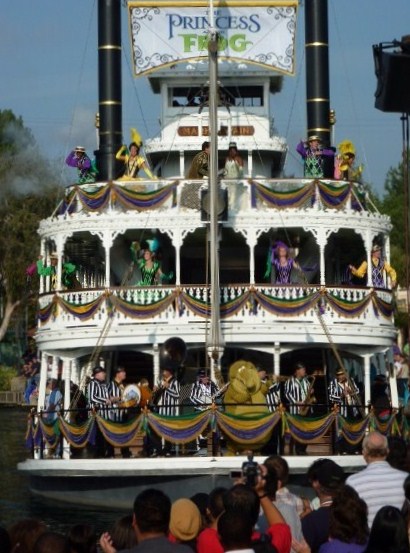 As the boat rounds the curve toward Pirates and the Cafe Orleans, the performers start rounding toward the levee side of the boat. Once it comes to a rest, the main show truly begins. 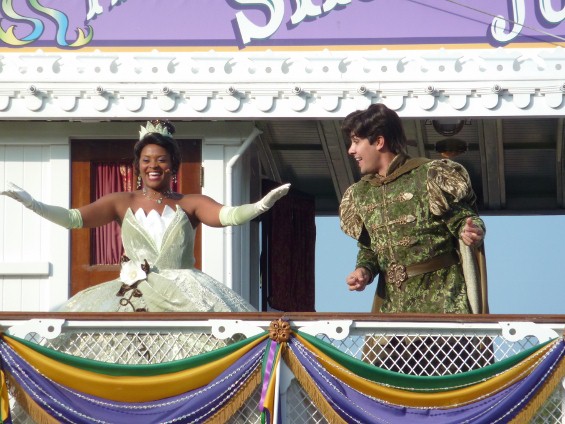 Tiana, Naveen, and even Louis treat us to quite the set of musical numbers. 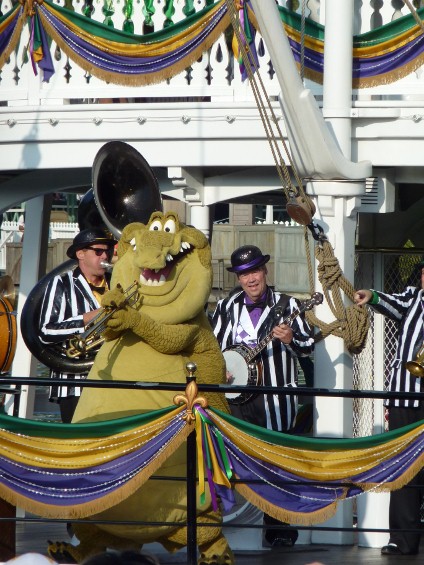 Even the Shadowman himself, Dr. Facilier, comes on board… 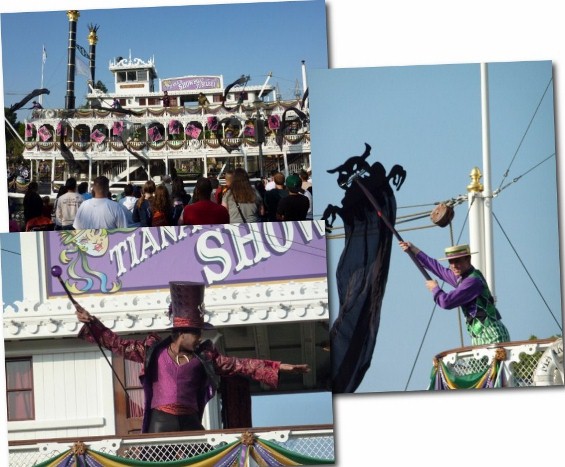 Even the guest performers are drawn into the act from the moment the boat leaves the dock. If you want to be in this show, you should really be prepared to give it all you have. Randy Newman has written quite an upbeat score. The order they chose for the song performance really pushed the storyline along and kept the positive energy up. We were very impressed that the guest performers could keep going at the same level as the performers! 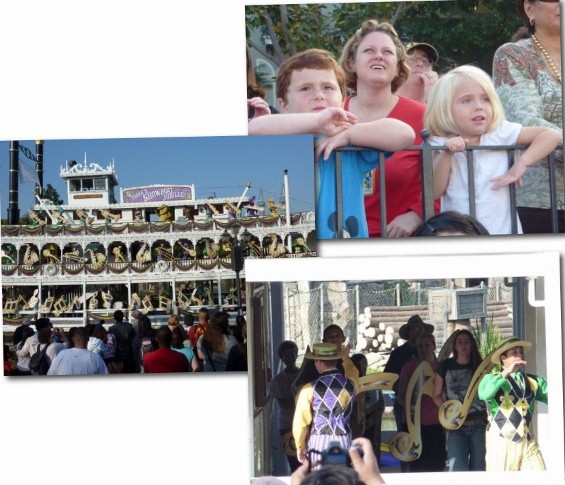 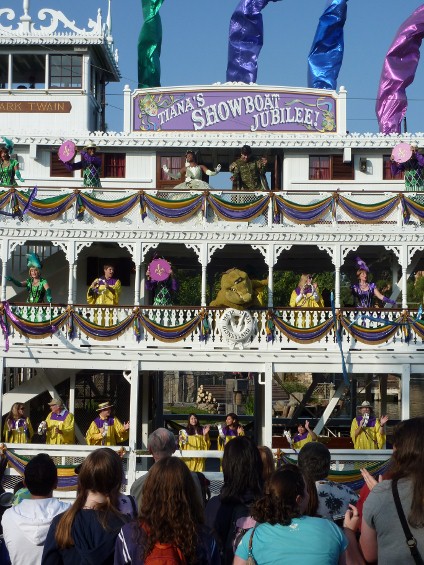 One thing that I think really needs to be reiterated is that this show is performed live. The audio quality is such that it doesn’t seem like it at first, but it really is a live performance – not the usual synced thing you would expect from a show of this nature. The New Orleans Square musicians have performed shows before, but nothing that has given them the same sort of fanfare. Tiana and Naveen have strong voices and are a joy to listen to. I know both Tony and my husband said they would have bought the soundtrack to the movie immediately after listening to the show. Even our two girls were singing and humming the tunes after we left the park. This really says a lot about the quality of the performance and the material. 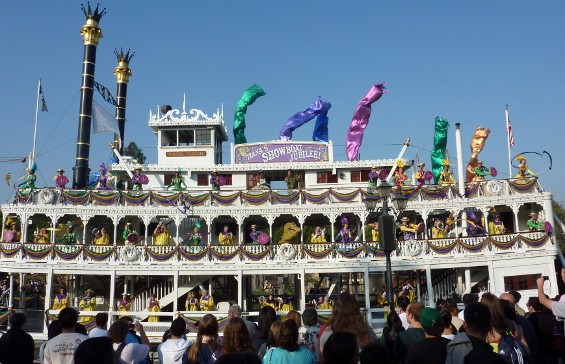 The Showboat Jubilee is set to run through January 3, 2010. If the management team at Disneyland is smart – they’ll keep this one, no matter what the folks in Florida decide to do with theirs. After all, here at Disneyland, we have New Orleans Square and the show truly is a wonderful fit! Let’s hope Disney listens and responds to our opinions. They need to keep honoring their “home town Princess”!