Shhhhhh, be vewy vewy qwiet, there’s a new roller coaster in town.  That’s what it felt like as I walked up to Universal Studios’ new roller coaster Hollywood Rip Ride Rockit.  No screams of joy, no squeals, no excitement… I’ve never heard of a roller coaster not causing screams of pleasure or terror.  Even the mild Big Thunder Mountain Railroad in the Magic Kingdom has people screaming.  Heck, for that matter, Goofy’s Barnstormer has people screaming, but not Universal’s new coaster.  Read on to get the rest of my impression. 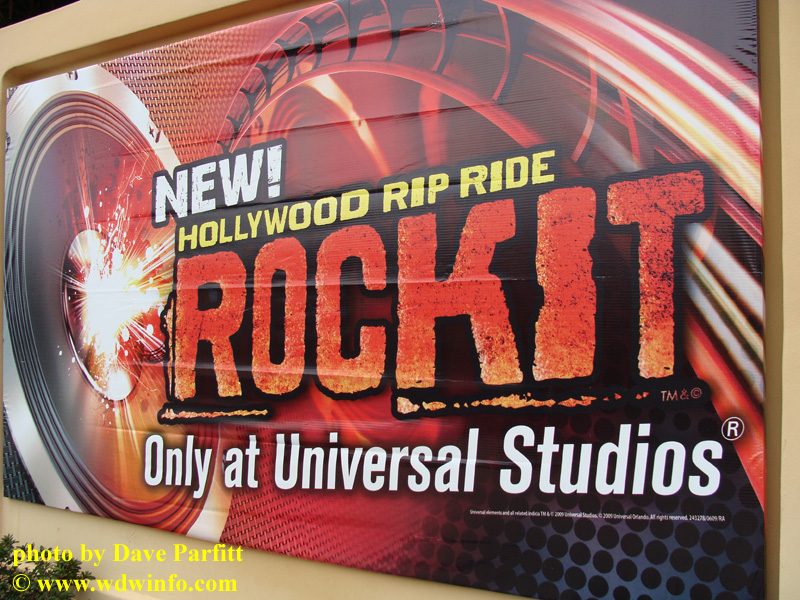 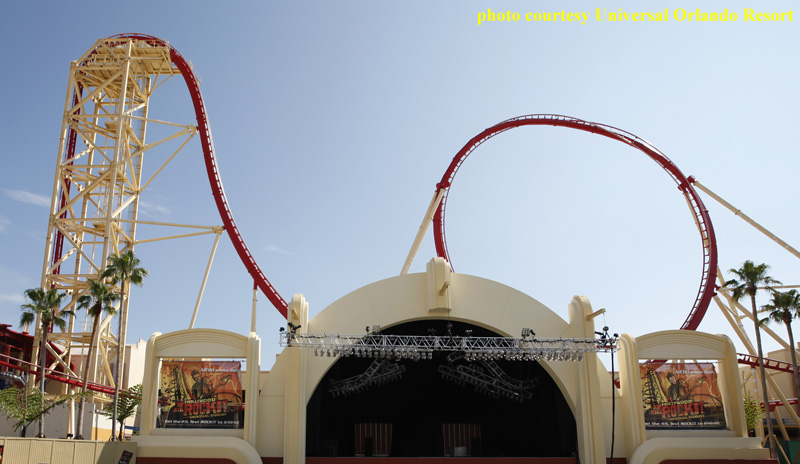 I had a day to myself, so I went over to check out Universal’s new coaster.  I walked over from Islands of Adventure, past the Hard Rock Café, and before I reached the Universal Studios archway I passed the ending for Rip, Ride, Rockit.  I could have tripped over it because I never heard anything.  It was so silent.  The schtick of the ride is that riders can select their music soundtrack for the coaster, and listen while riding via speakers built into the headrests of the seats.  I figured everyone must be so busy listening to the music, there are no screams or excitement. 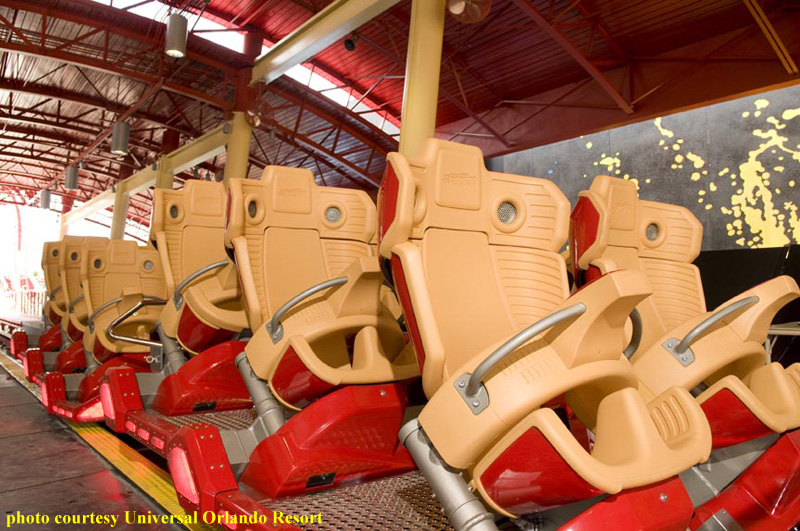 Anyhow, I was committed to give it a try.  A new coaster is a signature attraction for a park, and I didn’t want to miss out.  I walked up to the ride, and entered the single rider line.  This allowed me to bypass most of the queue, and whisked me right up to the loading platform.  I noticed as I walked through the queue that there were tons of video screens with hip cartoon characters explaining how to select your music once you’re seated.  However, I missed all those instructions by bypassing the entire queue.  No worries… I’m getting right on the ride… whoo hooo.  I waited 15-20 minutes for an empty seat, and then I’m ushered over to the car.  I sat down, pulled down the lap bar and revealed my personal touch pad to select a song.  Cool!  I couldn’t wait to see the song choices.  There were lots of genres to pick from including: Classic Rock/Metal, Rap/Hip-Hop, Club/Electronica, Pop/Disco or Country.  Each category had six songs, and I’ve heard there are even “secret codes” that release other songs as well. 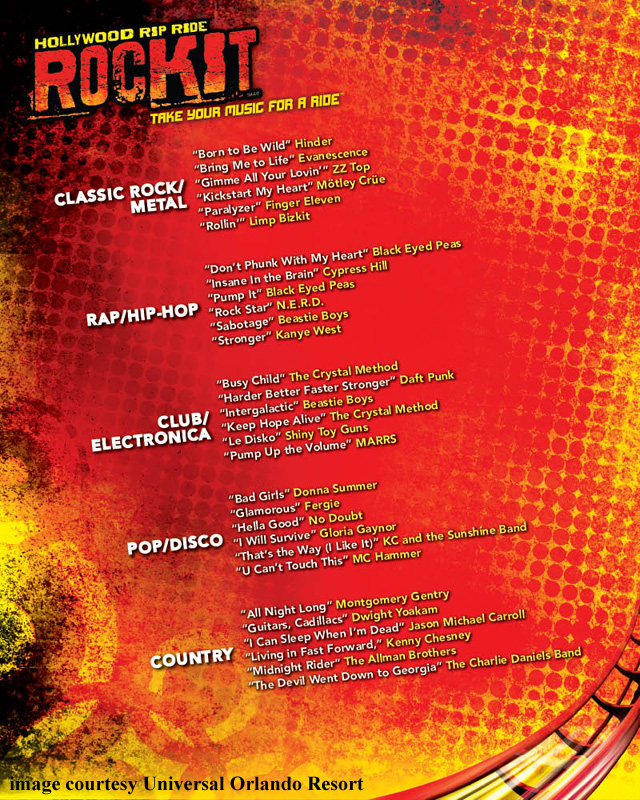 I sat down, pulled down the lap bar, and pressed Classic Rock.  There were some cool songs in that category, but I also wanted to see my other choices.  I pressed the back button, and… the ride took off… HEY! WAIT!  I didn’t get to select my song.  OH NO!  I frantically pressed buttons on my touchpad, to no avail… it’s too late, I was stuck with some generic, pulsating, beating, Electronica music pounding into my head.  Oh, the noise!  Oh, the 90 decibels of Noise! Noise! Noise! Noise! 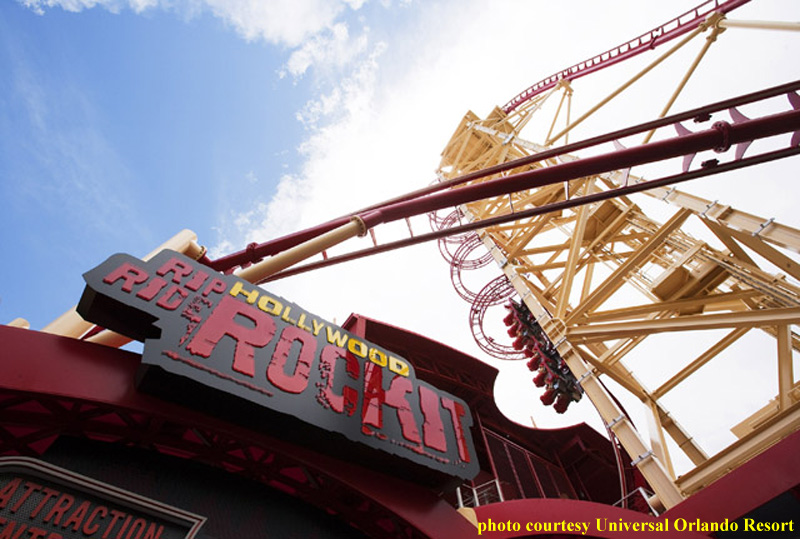 The ride started with a 90°, straight up, vertical, 167-foot climb.  You plummeted down the hill into the signature “Double-Take” maneuver – billed as the World’s largest “non-inverted” loop.  Meaning, you never actually are upside down because over the loop’s 103-foot width, you corkscrew, so the car was always on top of the track. 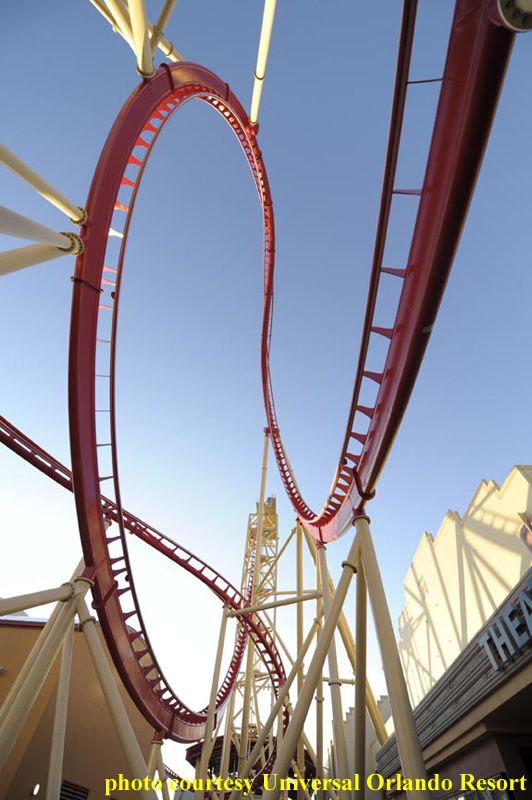 After the loop, you crested another hill, flew down and through a building.  There was just a gray wall to the building you’re shot through, and they could have used some more theming or imagery here.  This was the beginning of the “Treble Clef” maneuver that flung you into the New York area of the park, around a spiral, up and back down through the center of the spiral. 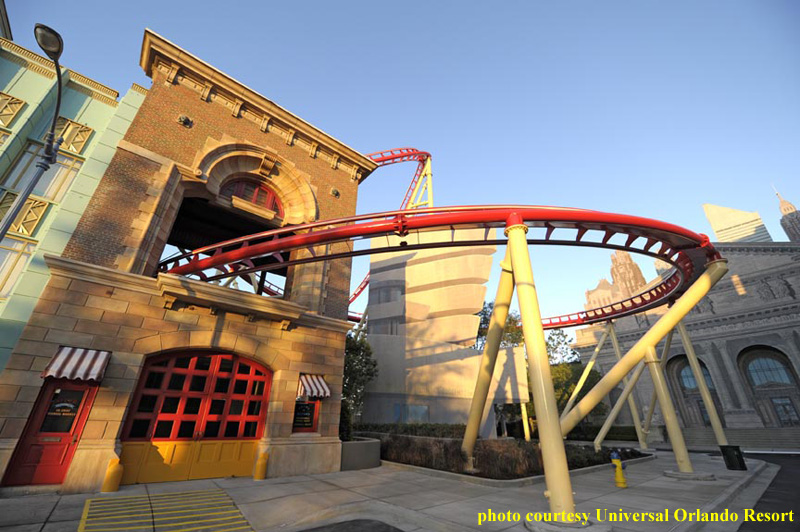 The ride headed back towards the entrance, over the queue line (where no one could hear you scream – because there was no screaming), and my head rattled around to the generic pounding Electronica beat (please make it stop).  For the first time ever, I actually wished for a ride end.  Not because it was too intense, but because this random music gave me a headache. 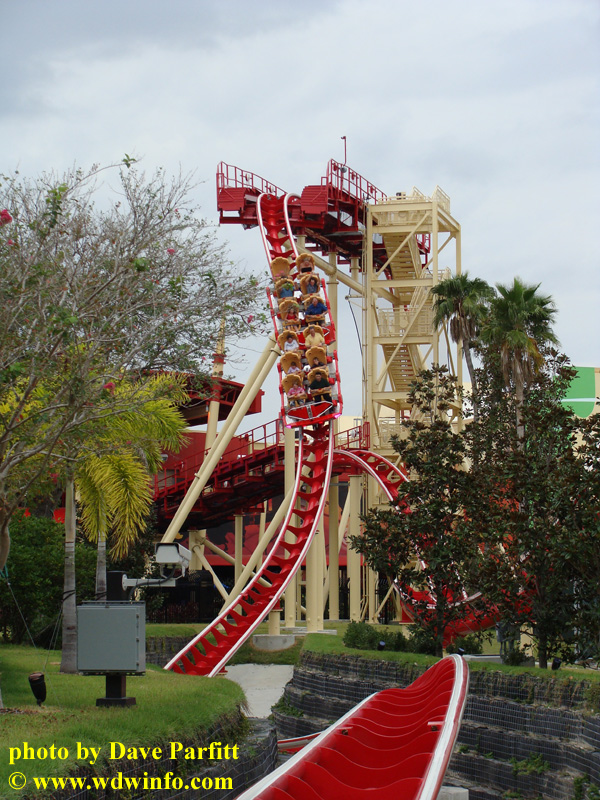 You coasted down a hill towards the front of the park, around another spiral, down a little drop that surprised and took your breath away for a second, and back to the loading/unloading platform.  Yes!  It was over!  At this point the generic announcer mocked me by saying how cool my song choice was and how great I looked on video.  Yeah, I think not, unless great is measured by how much I was scowling and waiting for the ride to end. 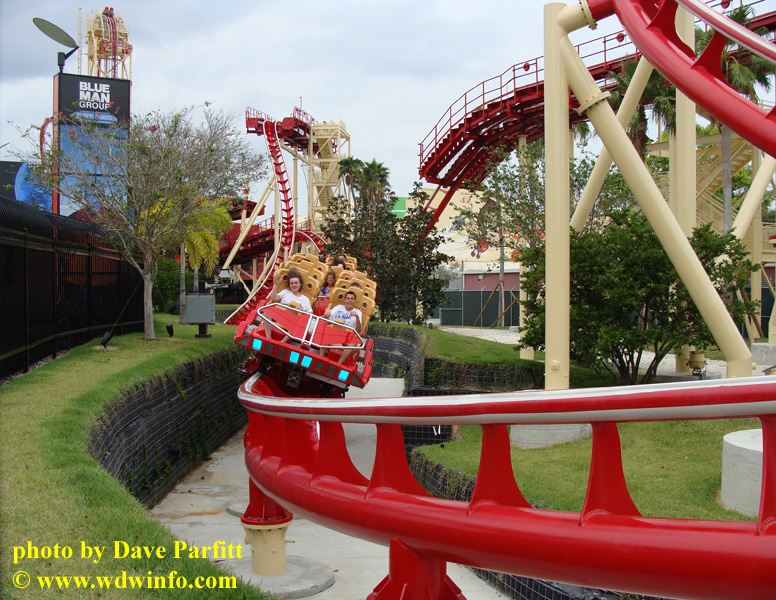 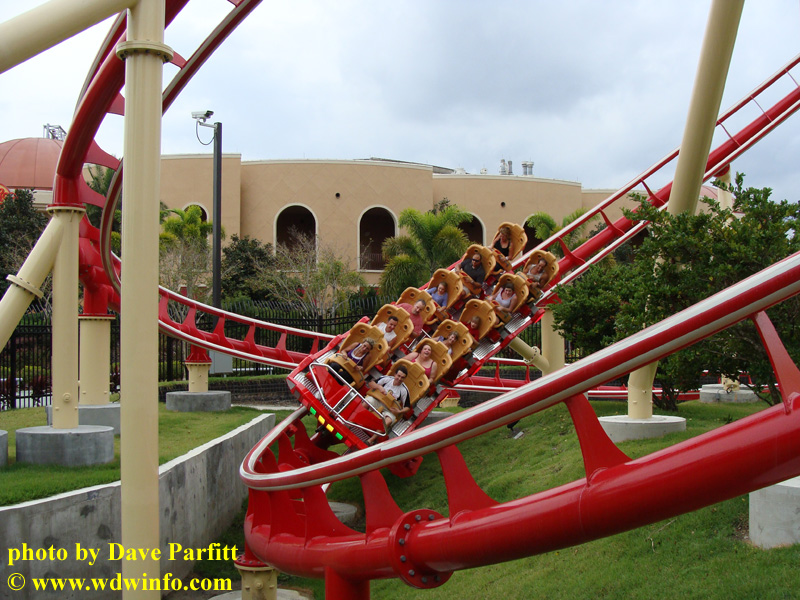 When the ride started, and I didn’t make a proper song choice, my plan was “oh, I’ll ride it again, get a better song, and give the ride another chance.”  After the coaster was over, I was done.  There was no way I was riding that thing again.  I had a headache from the loud music, and felt like a crotchety old man – “Hey!  You kids turn that music on your newfangled roller coaster down!”  You could purchase a DVD with a video of your ride experience and music, but, no thank you, I had no desire to have any record of the experience.  Instead, I would like it erased from my memory.

Who knows, maybe I’ll give it another try when I’m back in town, or maybe I’ll just do the Simpsons Ride again.  Yeah, I like that idea better.  Have you taken a turn on the new coaster?  Let me know what you think in the comments below.  Just log in with your DISboards username and password.