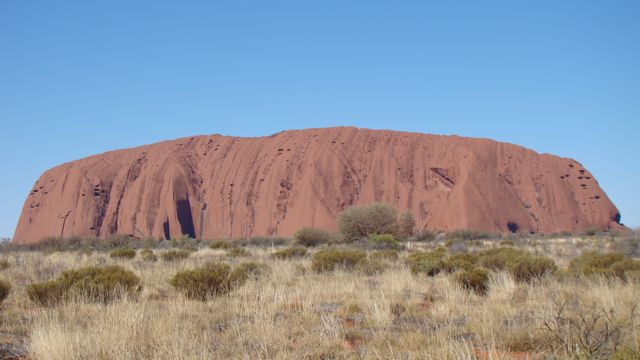 Days 5 and 6 of our trip took us to Uluru, in what is known here as “the red center” (the soil is red, and it’s in the center of the country – those Aussies are so creative with naming things ). Uluru is also known more popularly as Ayers Rock. I’ll be honest; while I wanted to see Uluru this was definitely not something I was particularly excited about. It’s a desert with a big rock in it. We’d get there, look at the rock, say how pretty it was, then leave and go someplace with people and buildings. Boy did I get that one wrong.

In case you’re wondering, Disney handles all flights inside Australia during the tour – it’s part of what you pay. They also (brilliantly) handle all the transport of your luggage, very much like Magical Express. All you do is show up at the airport, collect your ticket and get on the plane. This goes SO FAR in making this a stress free vacation – you have no idea. Not having to haul your luggage is a huge deal for me, because I pack like I’m never coming home again. My bag always gets tagged with the ‘heavy’ sticker (although that could also be a commentary on my weight, you never know).

As soon as we got off the plane we were taken to the Aboriginal Welcome Center at Uluru. We were told that we were not permitted to take pictures here because the locals don’t want to be treated like a tourist attraction – unless it involves selling a $300 stick painted by one of the Aboriginals that maintain the place. Yes, this ‘not a tourist attraction’ had a pretty pricey gift shop and it turns out that many of the things they sell could be found in Sydney for about half the price they were charging.

Of course, no trip on this adventure would be complete without some warning about how nature would attack you. On the first night of our trip we found a duffle bag in our rooms from ABD that had a variety of things in it (our itinerary, hand sanitizer, luggage tags) and this bizarre looking net that was open on both ends. It turns out that when you visit Uluru you will most likely be attacked by swarms of flies, and the net is something you wear over your head and under your hat to keep them from flying down your throat, up your nose and in your ears. Of course, I felt compelled to ask if these were mutant, venomous, killer flies (and if you think I’m kidding, just research ‘bull ants’). No, they’re just regular flies but usually they are in great abundance in the desert, hence the face net. Here’s a picture of Walter wearing his and looking like he’s getting ready to film the “Uluru Chainsaw Massacre”. 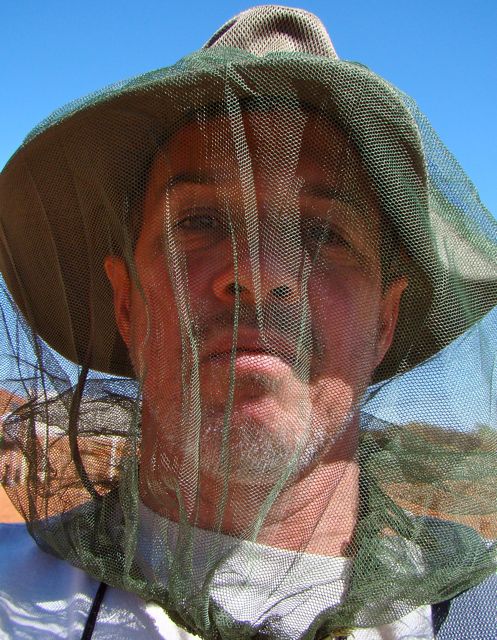 However, we got very lucky – thanks to the cooler temperatures this time of year, the flies were not nearly as bad as they can be during the wet season. Seriously – if you’re considering this adventure look to book it in September – we’ve had perfect weather since it’s the start of Spring in Australia. Even the locals were commenting how favorable the weather was.

Before leaving Cairns for Uluru, our ABD guides prepared us for the hotel. They told us it was not as nice as the Sea Temple (which was fine with me as long as they didn’t have a freakin bay window in the shower) and that we should manage our expectations. 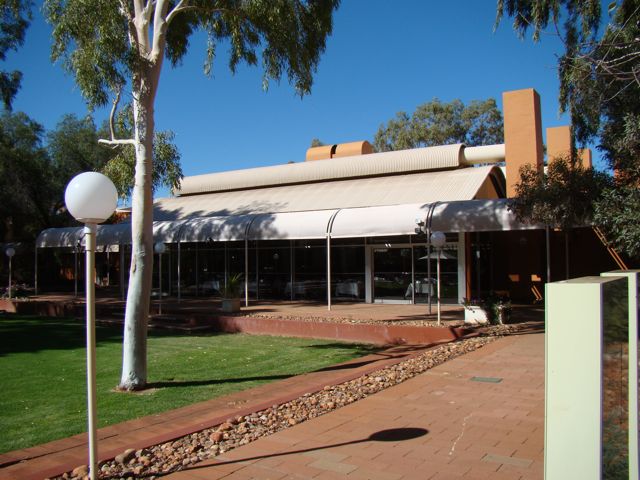 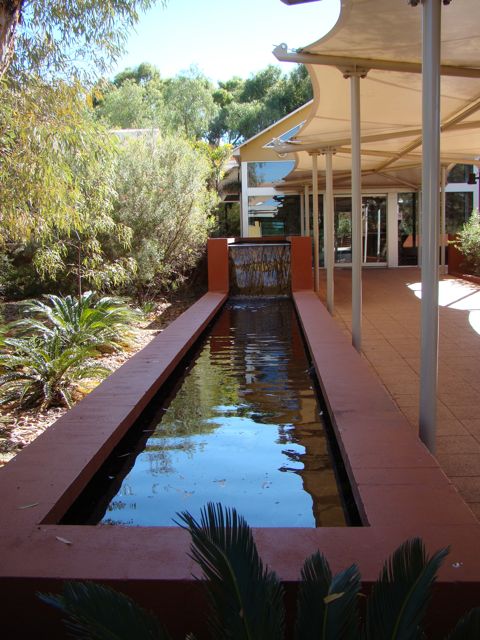 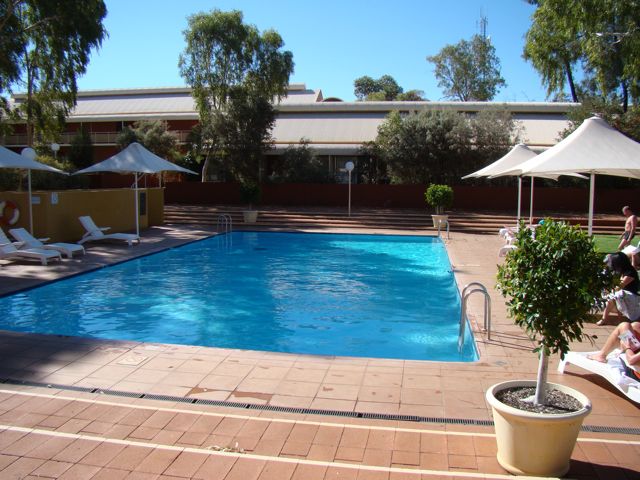 It turns out that the Voyages Desert Gardens Hotel was lovely. Not a Four Seasons mind you, but this is a national park. If you can find a Four Seasons inside Yellowstone, let me know. I say this because for some bizarre reason Disney gets a lot of complaints about this hotel. The rooms were spacious, the beds were a bit on the basic side and the bedding could have been a step up, but it had Wi-Fi, a great view of Ayers Rock, extremely friendly and helpful staff and a restaurant that served better than decent food. Another thing I admired about this resort was that the design and landscaping fit perfectly with the area. While Uluru is in fact a desert, there is an abundance of plants, trees, flowers and wildlife throughout the area. The resort captured that essence while providing what I considered a very comfortable retreat in a normally inhospitable place. You can keep Sea Temple and give me this place any day. Miraculously, the bathroom was self-contained with no bay windows or stripper polls to be found, so that was a plus. 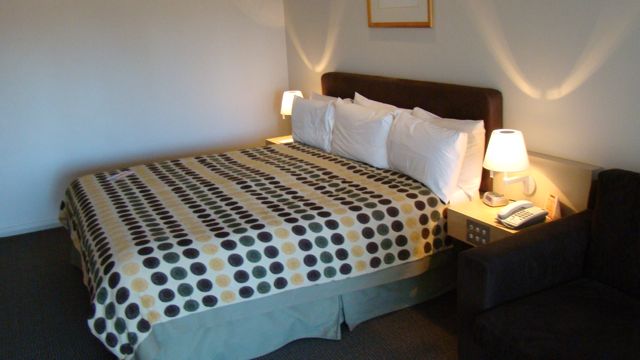 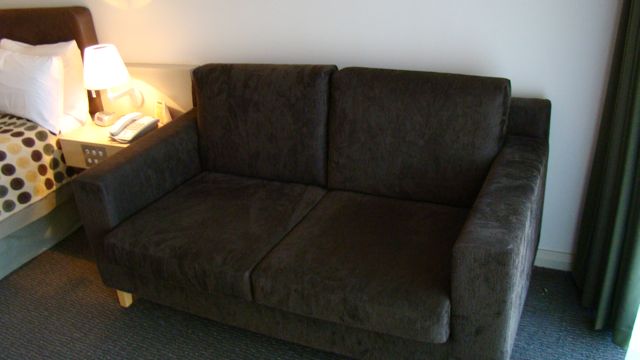 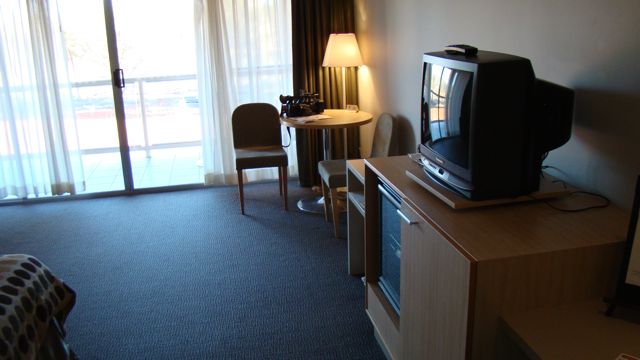 I should explain that our hotel is one of several that make up the entire complex. The nearest town to Uluru is Alice Springs, a good 2 hour drive, so this one area houses all the hotels you can choose at Uluru. Within the complex of hotels is a dining and shopping area that is referred to as “Town Centre”. Among the things you will find here is Gecko’s – an eatery that offers pizza, burgers and other such fare. Their ‘famous’ burger is called the Gecko Burger. I firmly believe they call it that because the burger is, in fact, made of Gecko – with some sawdust thrown in for texture and of course – a FREAKIN BEET. This culinary delight was $17. Those on our tour who actually ordered this all admitted that they removed the beef and just ate the bun – that’s how bad this burger was.

On our first night in Uluru we were taken back out to the Aboriginal Center for “The Sounds of Silence” – which was a barbecue in the shadow of Ayers Rock. It was sunset and as we drove out to the location you could see the colors on the rock changing as the sun changed position. It was stunning, but beyond that, it seemed spiritual. Looking at this place in pictures is one thing, but when you’re there – it’s very easy to understand why the Aboriginals consider this sacred land. So much so, that they insist you take nothing away from the area with you. Aboriginal folklore suggests that if you remove anything from this area, you will be visited with bad luck until you return what you took. In the Aboriginal Center they have a book on display that they call the “Sorry” book. In it are letters from people who have taken rocks or other ‘mementos’ from the area and have mailed them back after having bad luck befall them on their return home. Remember that I warned Walter to ‘touch nothing’ on this trip. I reminded him again – TOUCH NOTHING – especially here – I don’t want to end up FedEx’ing a rock back to the Australian desert. 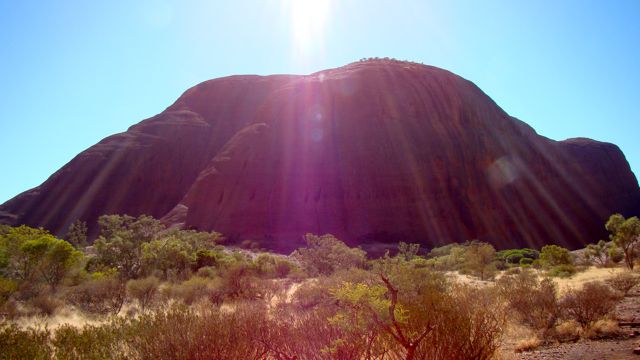 You know how a dog sniffs at the air when he smells food? Immediately upon exiting the bus, I started sniffing the air – I know that smell….it’s, it’s, it’s CARMELIZED ONIONS!!!! Oh thank you Jesus they’re sautéing onions!!! That’s enough for me – just give me a bowl of that and some salt and I won’t complain about the food again – but it was so much better. There was steak to go with the onions and it was a good steak. Not Shula’s good I’ll grant you, but what the hell – I just spent $100 on a McDonalds run the night before – I’m not going to start getting snooty now. There was also Kangaroo being served but this time it was actually good. It was also fully cooked so that probably helped a bit, and perhaps I was so delirious about the sautéed onions that a plate of kangaroo crap would have tasted good – but either way the food was delicious. I was starting to understand how things worked here – in order to get a good meal you have to go as far out of your way as possible and overcome life threatening challenges – mutant killer jellyfish in the Great Barrier Reef, the desert of Uluru or a cab ride to McDonalds (did I mention these people are CRIZAZY when they drive?)

And for the record I was not the only person that found the food in Palm Cove a challenge – most everyone shared my pain. As we sat and ate our dinner, looking at Ayers Rock we laughed about the food challenges, the blue lycra suits and a whole host of other things that had happened on our trip so far – it was then that it hit me – I really liked the ‘new people’. This was a fantastic group, and these were good people. People from all walks of life, people with an amazing sense of humor and adventure – people I was starting to hope I would keep in touch with after this wonderful experience ended.

But then it happened. As I sat looking at my new friends, enjoying their company – three words crossed my mind that sent a chill down my spine… “John was right”. I hate admitting when he’s right and if I’m going to be totally honest it happens a lot more than it should. “The Genius” was right – he said it on the last show before we left that we’d meet these people, become fast friends and keep in touch with some, if not all of them, after the trip was over. I honestly didn’t think that would happen, but there I was in the desert with 15 strangers who were a bit more familiar now than they were a few nights before. Just typing the words makes my fingers ache, but I’ll say it again – John was right. Ouch.

Just when I thought this night couldn’t get any better, they did an amazing thing – they turned off all the lights and plunged our group into total darkness. At first I thought that this was the part of the show where the Aboriginals came out and attacked us to make “white people stew”, but a simple glance upwards explained everything.  I’m simply not a gifted enough writer to describe the beauty of this scene. There were more stars than I’d ever seen anywhere before in my life. Having lived in or near major urban areas all my life I’d never witnessed the sheer number of stars we were seeing that night. I’d heard stories that from certain remote locations you could actually see the Milky Way, but I had never witnessed it until now. Walter and I stood apart from the rest of the crowd, arms around each other, both looking up at the night sky. Good food, good friends, good love all in the most beautiful place on earth. I was a lucky man and I found myself overwhelmed with gratitude. This was one hell of a good vacation and I didn’t want it to end. 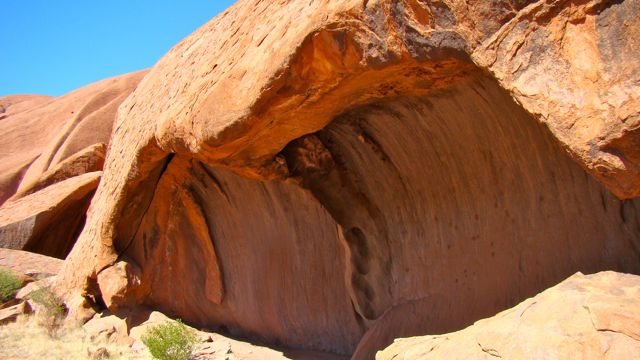 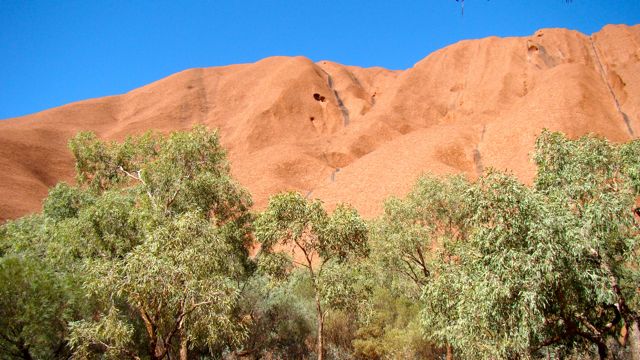 The next day the rest of the group did a hike around Ayers Rock and the surrounding area. I chose not to join them – and instead sat on the balcony of my hotel room with my notebook and enjoyed the view as I wrote up my blog entry for that day. I was so relaxed, so happy to be where I was that I just wanted to take some time and soak it all up. I’m glad I did as I’ll never forget this place, or the people I shared the experience with.

Next up – we’re off to Sydney!