My kingdom for a cheeseburger 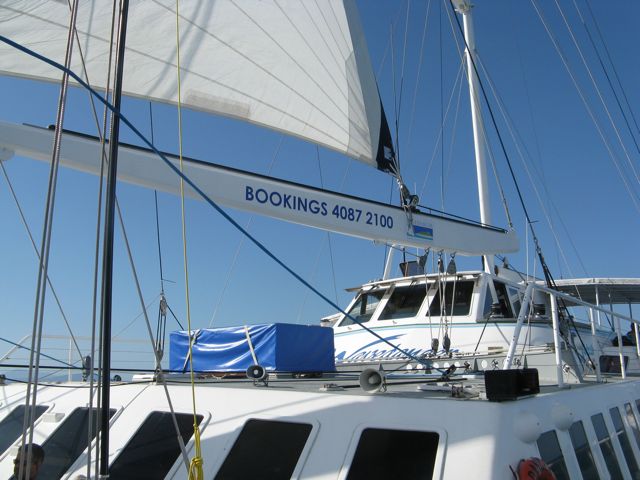 On the third day of our Adventures by Disney vacation, we headed out into Cairns for a 45 minute boat ride out to the Great Barrier Reef.  Considered one of the seven natural wonders of the world, this was something I had been looking forward to for many years.  Not so much for myself, because I knew that I would never get in the water to go snorkeling, but more so for Walter.  Walter has always had a passion about the ocean, and especially coral reef and tropical fish (he has a 300 gallon salt water reef aquarium at home).

Here again, the Disney name gave us special access and perks that others did not receive.  For example, we were the first to board the catamaran that would take us to the reef, and we received a special presentation by Suze, a marine biologist assigned specifically to our group.  Suze would lead our group onto the snorkel expedition later in the day, and as usual – it was just us, no one else.  Once we were briefed, they allowed the rest of the general public to board the boat (at this point in the trip, I started referring to them as ‘the unwashed’). 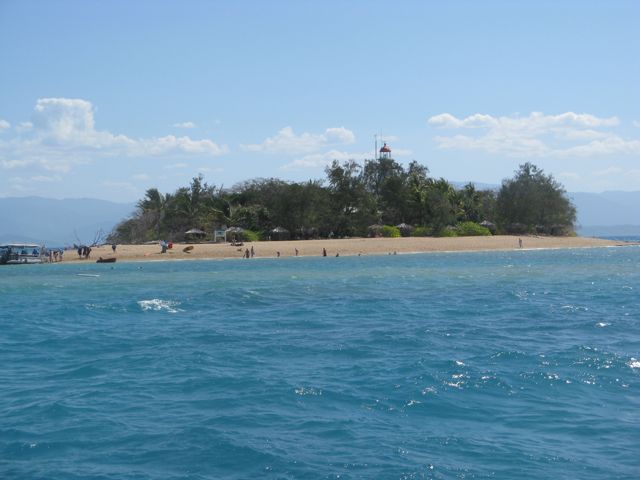 It was a stunning day – the weather was flawless and the seas were particularly calm.  In fact, Suze had mentioned to us that the seas in this area are only this calm about 3 days a year – usually, it’s much choppier and there have been occasions where many guests on the boat would get sea sick.  So, a word of caution to anyone taking this excursion – have some kind of motion sickness tablets with you.  They do provide ginger tablets on board the boat if you need them as well.

Along with Suze the Marine Biologist, we had Sam the lifeguard.  Sam – the very blonde, very well built lifeguard.  I was plotting ways to throw myself over board requiring rescue, however, Sam was young – like ‘close to pedophilia young’, so I abandoned those plans and focused instead on what they would be serving us for lunch.

You have to bear in mind that at this point I’d been in Australia for 5 days and still hadn’t really had a decent meal.  By now I was so hungry I was seeing dead relatives, so naturally I was fixated on exactly what type of food I’d be served for the buffet lunch.  Would it be ‘normal’ food (meaning food without boiled fish, raw kangaroo or beets)?  Or, would it be a colossal disappointment as virtually every other meal had been.  My desire to find a McDonald’s had now crossed into obsession.  I was questioning Australians with an almost prosecutorial passion about whether McDonald’s in Australia tasted the same as McDonald’s in the U.S.  I was desperate to find out if the Aussies routinely defiled a beloved Big Mac by adding some bizarre ingredient to the mix as they had with virtually every meal I’d tasted so far.   Granted, one of the good things about McD’s is consistency, but I’d been burned by Australian culinary creativity and simply couldn’t get past the fear that my Big Mac would have squid or something equally offensive on it.  Also keep in mind that there have many places here where we’ve asked for ketchup and received what could charitably be referred to as tomato sauce.  I mean, what’s up with that – have we kept ketchup a secret?  Do we need to send the Aussies a case of Heinz? 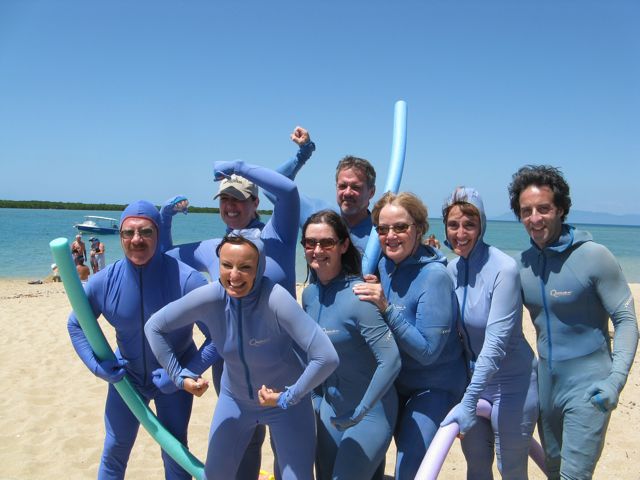 But we’ll discuss lunch later.  During our briefing by Suze we were informed that those choosing to snorkel would, in fact, have to wear Lycra suits.  While the company conducting the tour didn’t require it, Disney did – as there is always the possibility of being stung by big, ugly, mutant, killer jellyfish.  Yes, another thing to add to the list of things in Australia that will make you dead.  I’m convinced that the reason Australia only has 22 million people is because the other 100 million have been eaten, stung, bitten, crushed or otherwise driven to suicide.

While I was pretty sure I wasn’t going to snorkel (I’m not a great swimmer, and not exactly in great shape), the requirement of wearing a blue lycra bodysuit sealed the deal.  I have a responsibility to mankind to not be seen in Lycra, Speedos, spandex or any other article of similar clothing .  Also, there was no way in hell I was going to allow there to be photographic evidence of me wearing one of these things.  It was just wrong – and even picturing the image in my mind made me throw up a little in my mouth. 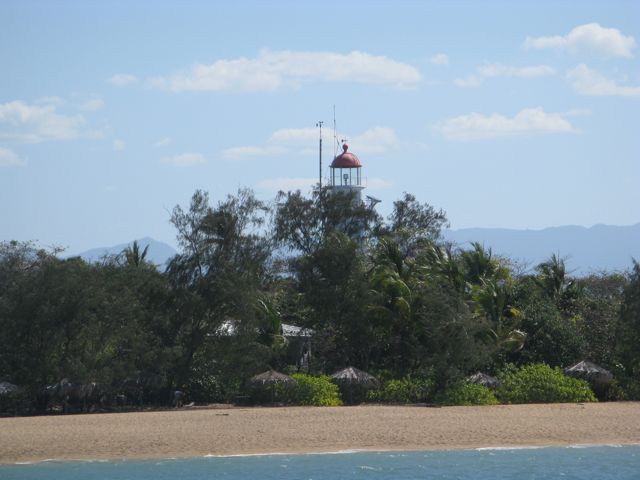 Our boat took us to a small island in what’s known as the ‘Low Isles’.  The water here is shallow enough for beginners to snorkel and see some fantastic coral and sea life.    However, it should be noted that it’s not a good idea to snorkel here if you’re not in decent shape and a halfway decent swimmer.  While the water was calm when they started to snorkel, the currents become more pronounced and it became difficult to swim back for many on our tour.  Walter, who doesn’t smoke and works out three times a week had a hard time, as did a few of the other ‘in shape’ members of our team.

Before we left Orlando, we had purchased an Olympus waterproof digital camera.  The camera would take underwater shots (with no protective cover) in up to 10 feet of water.  While I’m glad we bought the camera, they did have digital 35mm underwater cameras for rent on the boat.  For $65 you rent the camera for the day and get to keep the 1GB memory card with the pictures on it.  That camera took fantastic pictures and I strongly recommend this option.  Below are just some of the underwater pics that were taken with both cameras.  Needless to say, the pics speak for themselves. 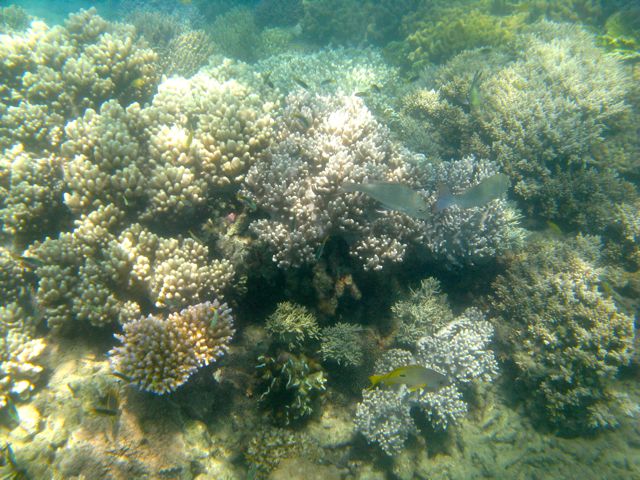 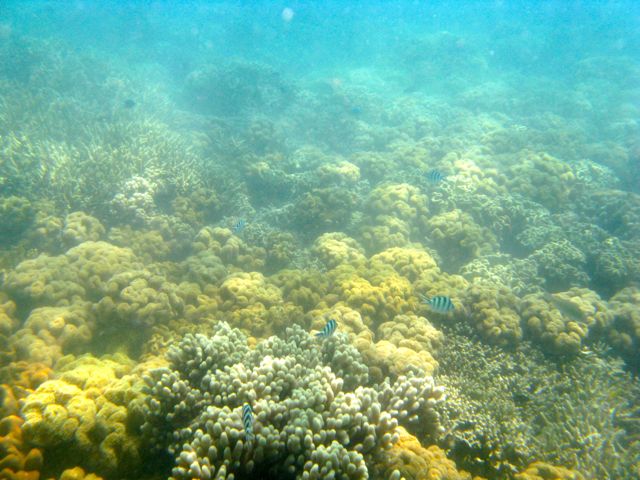 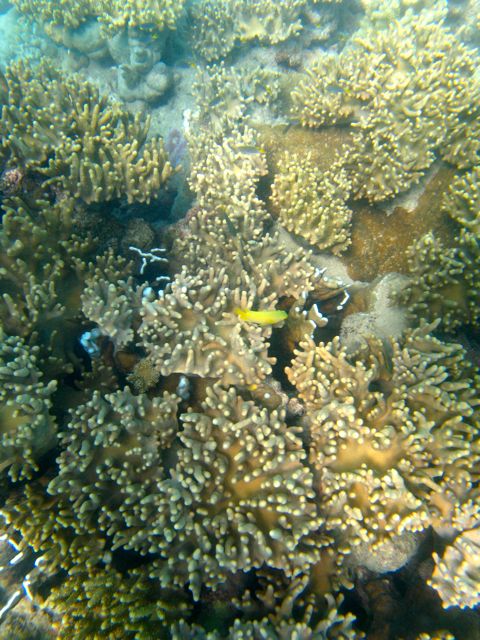 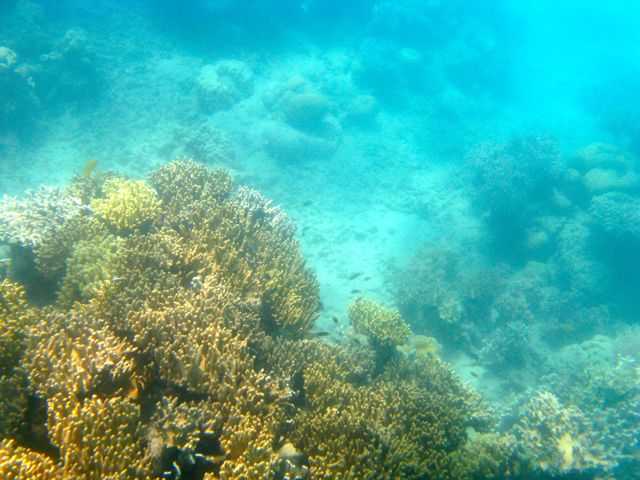 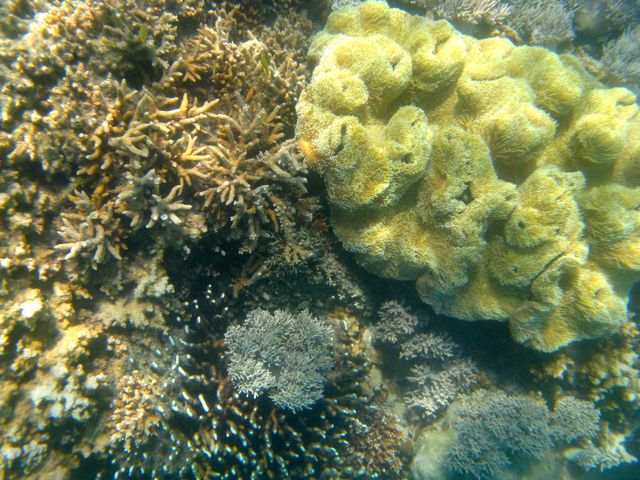 If there is any indication that I have an unhealthy obsession with food, this trip has put it to rest.  Again, in my defense, finding a decent meal in Palm Cove was like trying to find the Lindbergh baby, so I was hungry.  I’ve often said if my body started feeding on itself I’d probably be able to go for about 2 years.  In truth, it was about 5 days.  So here I am on an island at the Great Barrier Reef and all I’m worried about is 1) Can I smoke here? (our ABD guides Amber and Christy must have heard that question about 40 times in 10 days) and 2) What will they serve for lunch (another question they heard a few dozen times).  I’m not soaking in the beauty of my surroundings…no, I’m rocking back and forth like I have brain damage waiting for lunch time to come.

Feeding time was at noon and lo and behold, my prayers were answered.  A nice selection of cold cuts, a pasta salad that didn’t include any bizarre ingredients and cold barbecued drumsticks were all I needed to see.  I ate three plates of food then quietly slipped into a coma.  I had to travel a few miles off shore into the middle of the ocean in a place where they hand out blue lycra suits to get a decent meal in Far North Queensland.  Go figure.

While lunch was a few steps above edible, I still found myself craving McDonalds.  Of course without a car, we would need to take a cab from the hotel to the nearest McD’s (about 20 minutes away) – which I knew would be expensive.  But, I couldn’t take it anymore and we broke down.  A $60 cab ride combined with the $27 it cost for two big macs, two double cheeseburgers a large fry and large coke (that was for Walter and I, not just me) made this the most expensive trip to McDonalds I’d ever taken.  However, after just one bite of my Big Mac, I was in fat American heaven.  It was worth every dime.

This was to be our last night in Palm Cove – our last night of taking showers while on display and thankfully, our last night of substandard food.  It turns out that to get a really good – I mean REALLY GOOD meal, I needed to go into the middle of the desert and stare at a big rock.  Next report – Uluru and a magical night under the stars.

A Night for the Senses
The Red Center