Two Fall Disney Races to End: Run ‘Em While You Can 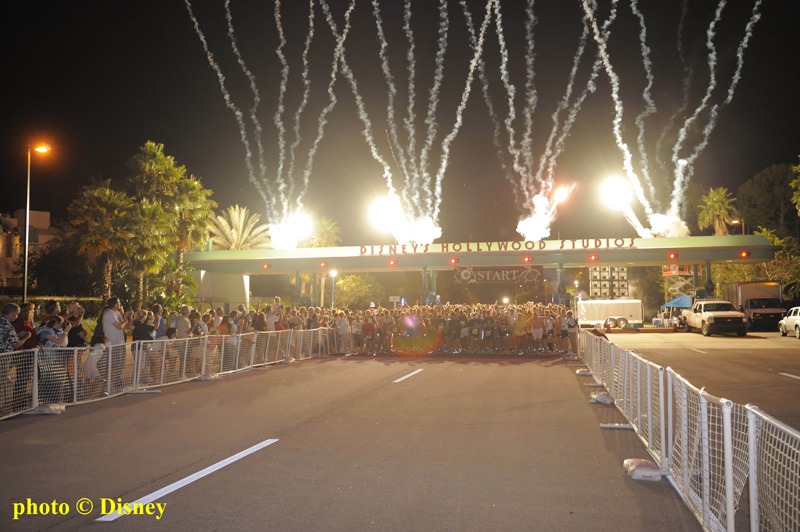 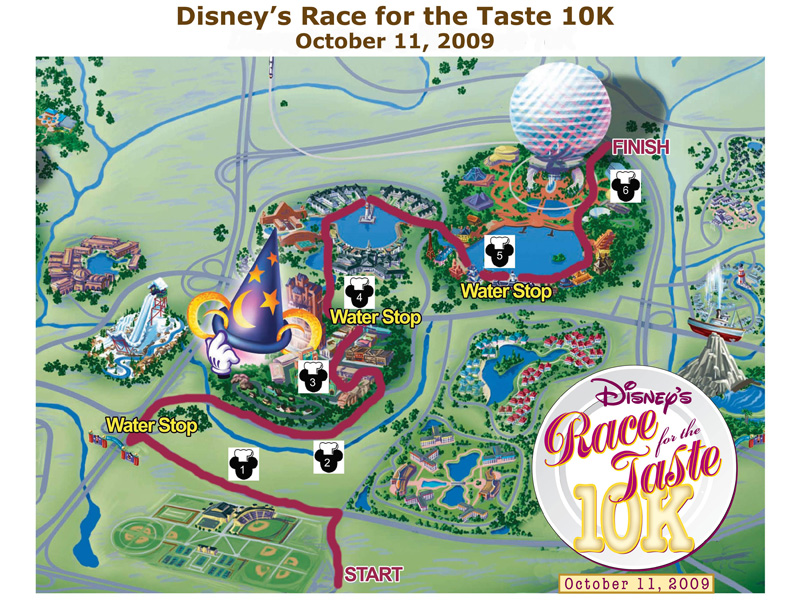 The Race for the Taste 10k on October 11 occurs in the heart of EPCOT’s International Food and Wine Festival (September 25 – November 8, 2009).  The course starts at Disney’s Wide World of Sports, and winds through two parks: Hollywood Studios and EPCOT.  Registration for the 10k costs $50 ($55 after September 15) and includes: a collectible pint glass, newly designed finisher’s medal, and three food samples from the Food and Wine Festival at the post-race picnic.  The post-race picnic takes place at the finish line of the race in the EPCOT parking lot (Note: admission to the Food and Wine Festival is not included).  New for 2009 is a 3k race starting at Spaceship Earth, around World Showcase, and ending past Future World outside of EPCOT.  Registration for the 3k costs $35 ($40 after September 15) and includes all the same items as the 10k (with a 3k finisher’s medallion).  The medal for this race has been redesigned for 2009, but sources assure me it will continue to include the popular knife, fork, and spoon dangles. 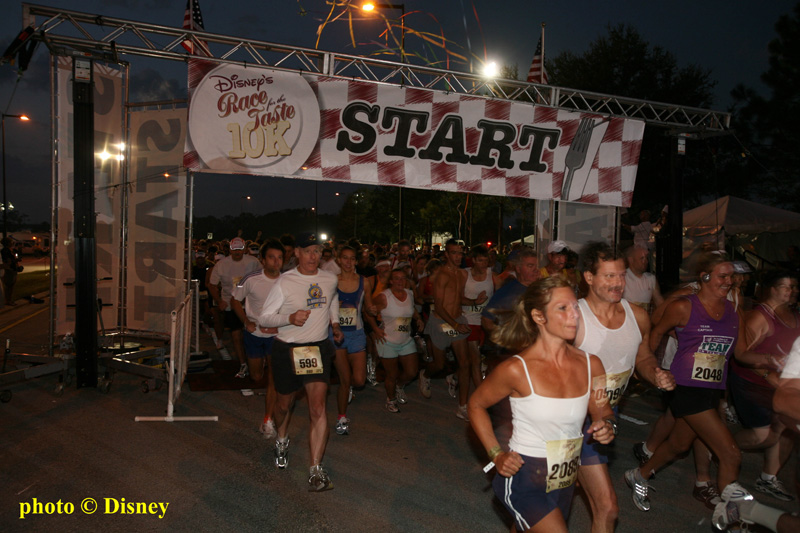 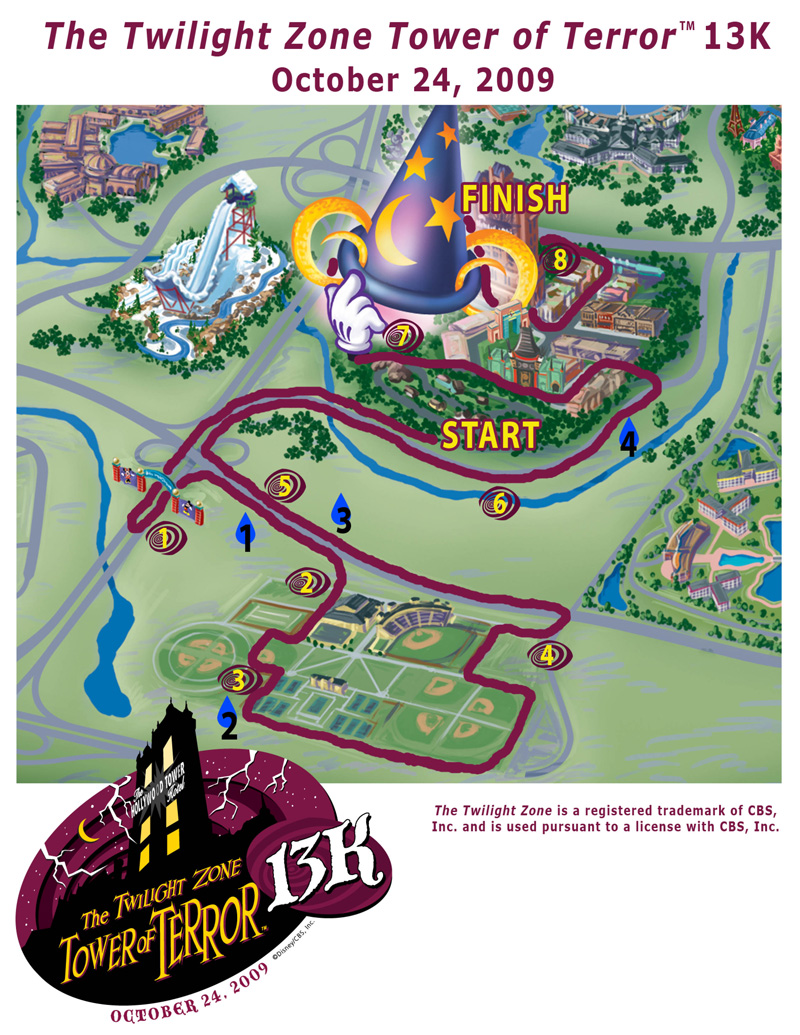 This will be the third year for the Twilight Zone Tower of Terror 13k (a relatively short lifetime for this event).  This is a highly themed night-time race (starting at 10:30pm) with a unique 13k (8.1 mile) length beginning at the entrance to Hollywood Studios, around the Wide World of Sports Complex, back to Hollywood Studios and ending behind the Tower of Terror.  Everything about this race is themed to transport you into the Twilight Zone via the Hollywood Tower Hotel.  Before the race, you check in to the Hollywood Tower Hotel, sign the guest registry, pick up your room key, and check your luggage.  New for 2009 is a 5k distance (starting at 10:15pm) through the eerily vacant streets of Hollywood Studios.  Along both courses are clues to solve a mystery that takes place at the event.  Registration fees before October 1 are $85 for the 13k and $50 for the 5k (after October 1 fees increase to $90 and $55).  The registration fee includes entry into the race, a shirt (13k tech and 5k cotton), a very cool finisher’s medal (13k medal has moving elevator), and entry into a Post-Race Party at Hollywood Studios.  The after-hours Post-Race Party goes until 2am, and includes access to attractions such as the Twilight Zone Tower of Terror, Rock ‘n Roller Coaster, and Toy Story Midway Mania. 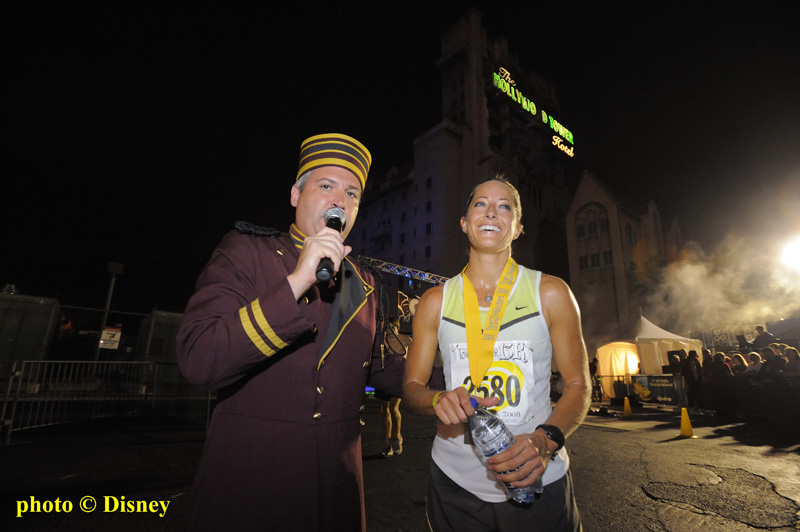 Fall Race Challenge (3 medals for 2 races)
Even though this is the final year for the Race for the Taste 10k and the Tower of Terror 13k, the Disney Endurance Series Team is still coming up with interesting ways to promote these races.  For the first time, runners who record an official time in the Race for the Taste 10k and one other Fall endurance event (either the Expedition Everest Challenge or the Tower of Terror 13k) will receive a bonus medal: a total of three race medals for running two races.  “Disney is dedicated to providing guests with new, interactive features to make their race experience more fun, more exciting and more memorable,” says Disney Endurance Series Director Kathleen Duran. “We are always looking for new ways to differentiate our Disney events by creating unique, immersive experiences.”  This new bonus medal will be Disney’s first ever medal with spinners.

So if you are trying to collect all of the Disney race medals, you better hurry to register for these disappearing events.  I’m now counting my pennies to see if I can come down and run the Tower of Terror 5k with my daughters.  It would give them time to train, the mystery tour in Hollywood Studios sounds fun, and we can celebrate our accomplishment by riding Toy Story Midway Mania again, and again, and again until 2am.  Anyone want to join me?