As fall approaches, Disney’s Endurance series of races gears up at the Walt Disney World Resort.  First up on Saturday, September 26, 2009 is the Expedition Everest Challenge at Disney’s Animal Kingdom.  I was able to run the Inaugural event last year, and it was one of the most enjoyable races I have ever run.  The race can be run either as teams of two or individually.  You can register online until September 20, 2009, and the fees are $199 for a team or $105 for an individual (registration fees increase on September 1, 2009 to $209/team and $110/individual).  The registration fee includes not only entry into the race, but also entry into the post-race party and a one day theme park ticket to Animal Kingdom, Hollywood Studios, or EPCOT (valid September 25 to October 9, 2009).  Last year I ran as an individual, and you can read more about my experience below. 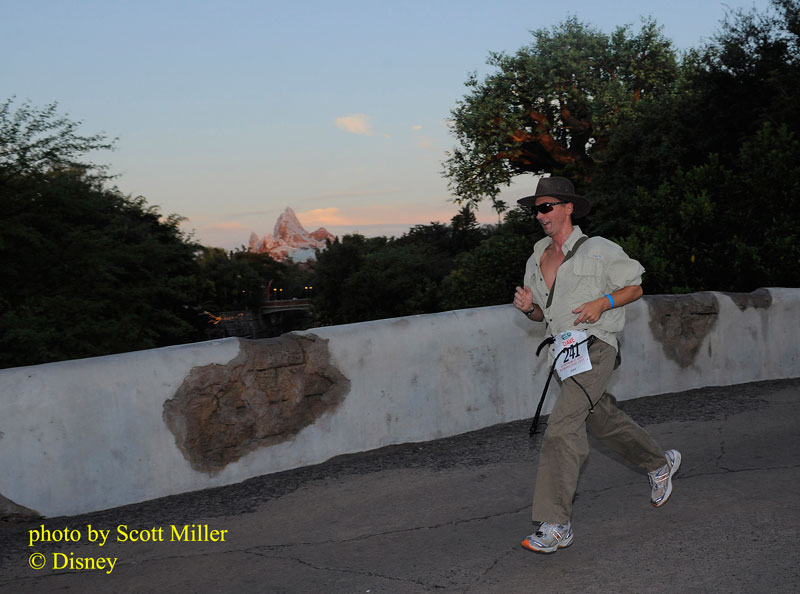 I arrived at the Animal Kingdom around 6:00 pm on Saturday, September 27, 2008.  For this special expedition, I decided it was only appropriate to wear my adventurer gear including fedora hat, satchel, and of course a whip.  It was a gorgeous, but hot, day.  The setting sun was beating down on us in the Animal Kingdom parking lot – spoiling the pretense of standing in the Himalayan foothills.  The race started at 7:00 pm (2009’s race will start 30 min later at 7:30 pm), and we needed to be in our starting corrals by 6:30 pm.  On the way to the starting line, I met up with some of my running friends from the WISH (We’re Inspired to Stay Healthy) forum of the DISboards. 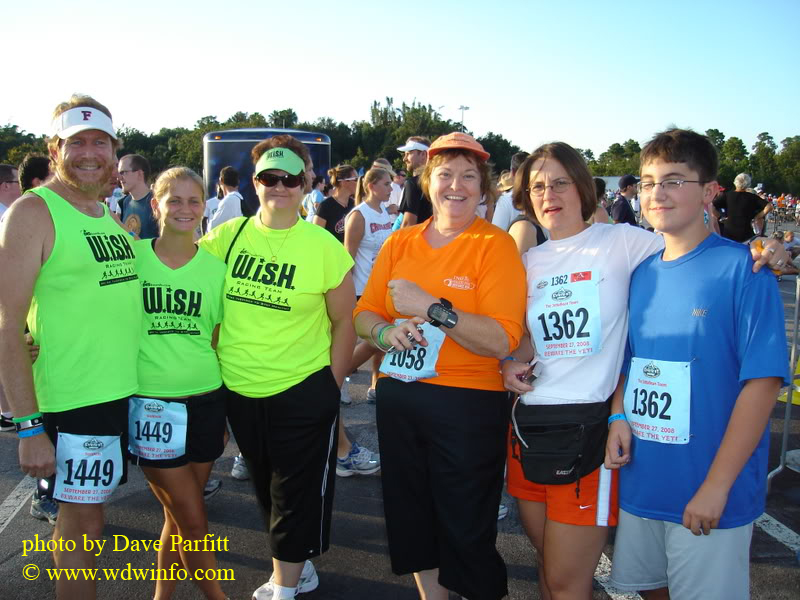 The Expedition Everest Challenge event included a 5K race through the Animal Kingdom Park followed by an obstacle course in the parking lot, and finished with a scavenger hunt back in the Animal Kingdom.  The race started in typical, exciting Disney fashion with fireworks blasting into the sky from the archway of the starting line. 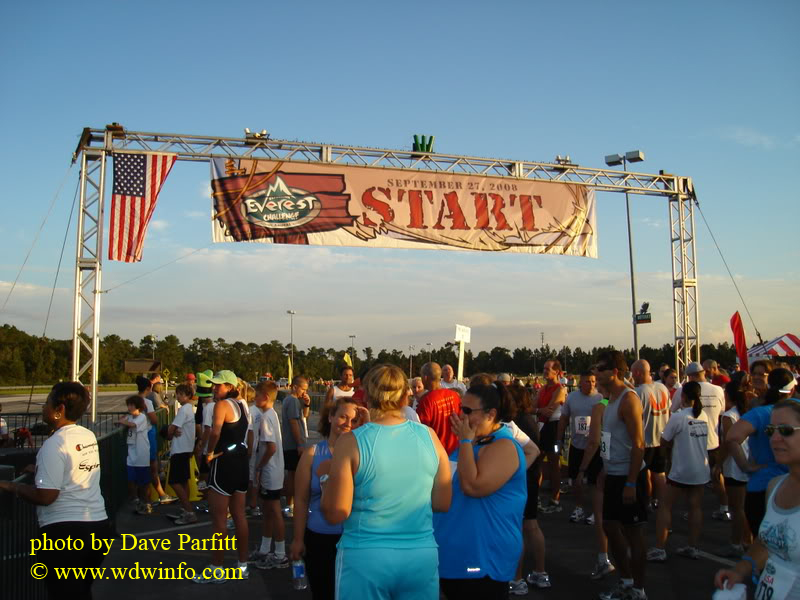 At 7:00 pm, we took off in waves with the individual runners starting off first – this turned out to be an advantage I will write more about later.  The first mile was spent running around the perimeter of the Animal Kingdom parking lot.  We then entered the park, crossed the bridge to Discovery Island and headed toward Africa.  After crossing into Africa, we turned onto a backstage service road where we crossed the railroad tracks for the Wildlife Express Train to Rafiki’s Planet Watch.  This was an out and back portion of the 5k course, and there was a water stop along the way before the 2 mile point (you hit the same water stop on the way back).  We exited the backstage area near Flights of Wonder in Asia.  The course then took us along a path towards the entrance to Expedition Everest.  We crossed the bridge into DinoLand U.S.A. and ran past the theater for Finding Nemo: The Musical, Chester and Hester’s DinoRama roadside attraction, and Restaurantosaurus before going onto another backstage road.  This backstage path took us back to the front of the park and the 5k starting line.  [Note: In 2009, the 5k course will not go through DinoLand U.S.A.]  We had now finished the first portion of the challenge.  It was at this point I realized the advantage of starting in the first wave as many runners had not yet begun the race.  I waved to my WISH friends in the corrals waiting for their start. 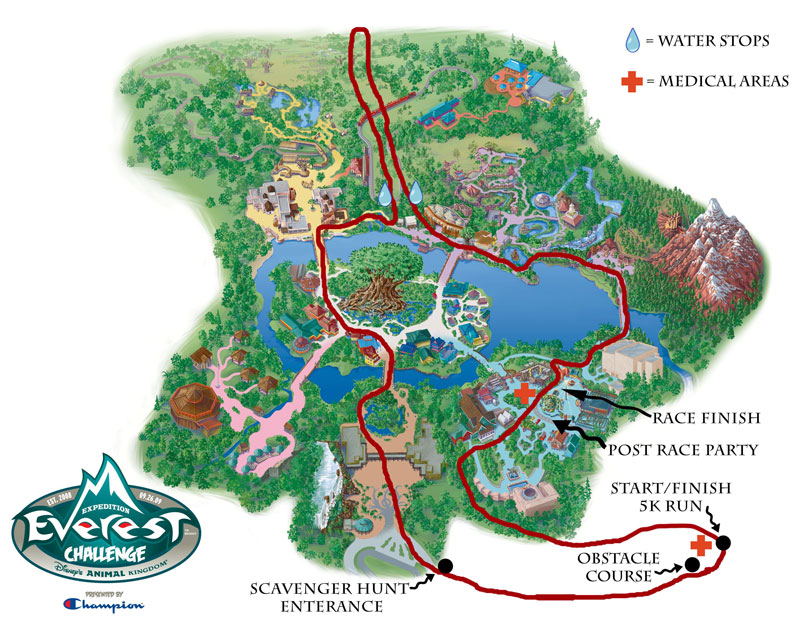 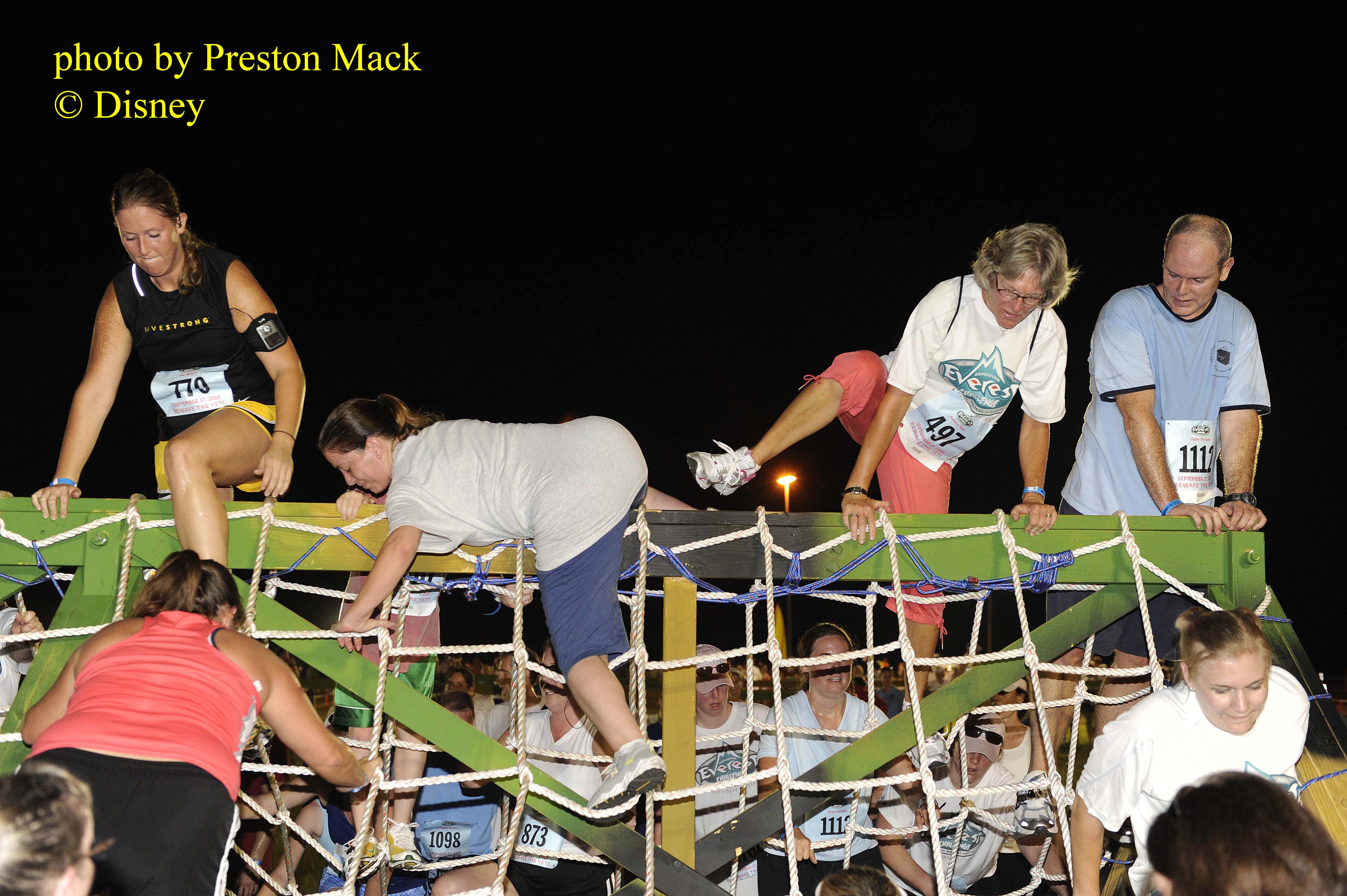 Each passport contained 4 clues to answer during the scavenger hunt.  There were many different sets of passports so each team (or individual) was not working on the same set of clues.  The 4 clues were spread in the different areas of the park 1) Discovery Island, 2) Africa, 3) Asia, and 4) Expedition Everest.  You needed to write the answer to the clue in the space provided in the passport.  Once you solved all the clues, you made your way to the finish line at DinoLand U.S.A. where a volunteer checked your answers against a key.  At that point the race was completed, you picked up your very cool Expedition Everest Compass Medal, and were free to join a special post-race party.  The party was very festive with a DJ playing music until midnight, food and drink available to purchase, and the opportunity to ride Expedition Everest, Kali River Rapids, and Chester and Hester’s DinoRama.  The highlight of the party was definitely repeatedly riding Expedition Everest at night with no line. 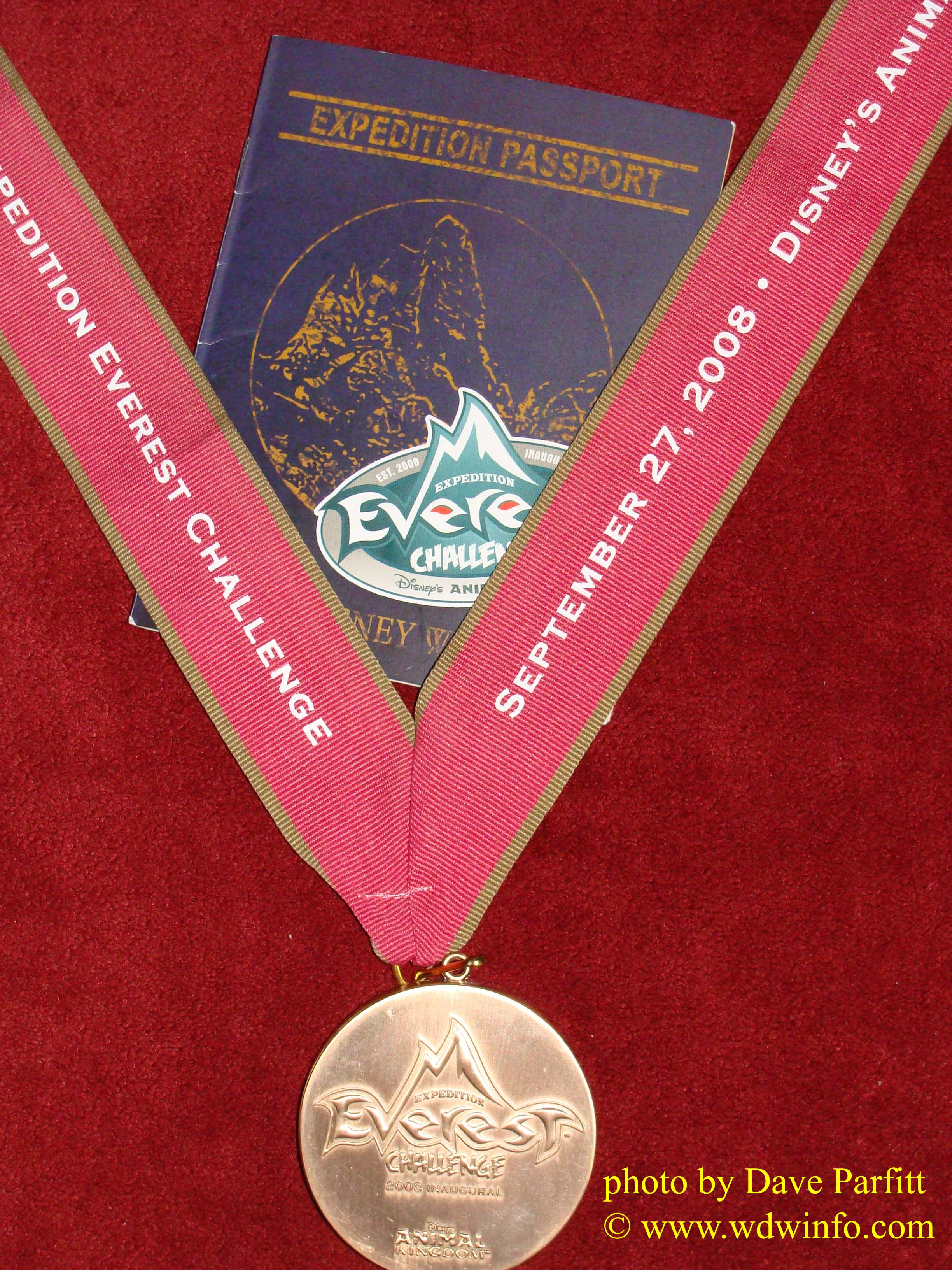 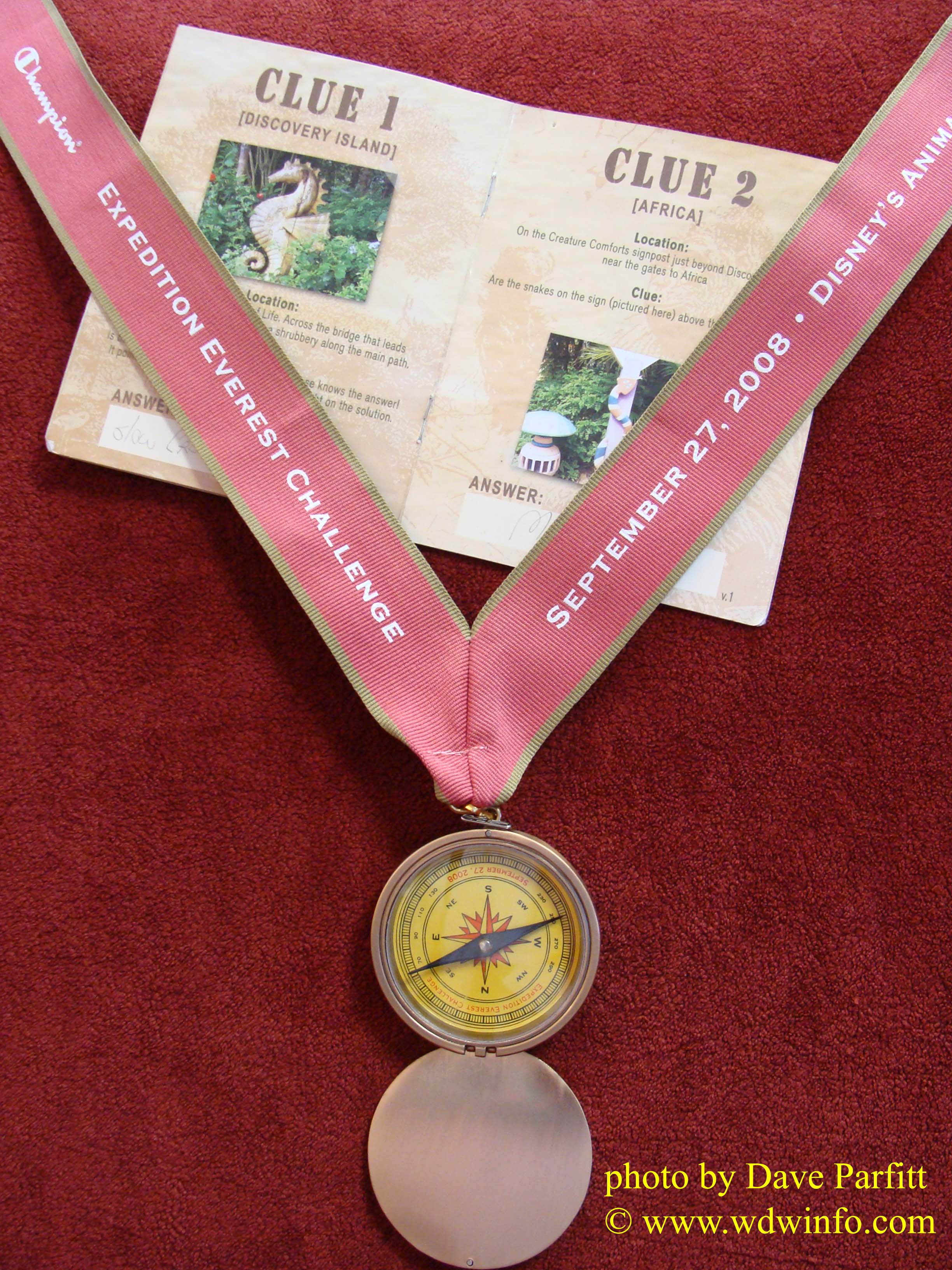 So what made this race so memorable?  The Expedition Everest Challenge is an “urban adventure” race – combining running with obstacle courses and scavenger hunts.  Spawned by television shows such as “Survivor” and “The Amazing Race”, these elements really add something different to the typical running race.  In addition, this event is the only signature race staged at Disney’s Animal Kingdom, and, in Disney fashion, a backstory and characters were developed for the race as well.  The character Gary Ericson is the leader of Team Y.E.T.I.’s (Yeti Expeditionary Trek of Intensity) assault on Mt. Everest from Base Camp Fury 242 (also the starting area for the race).  The Base Camp starting area is wonderfully themed with an old 1930’s-40’s propeller airplane, tents, and various mountain expedition equipment strewn about.  In addition to fictional characters, Disney brought in an actual Mt. Everest climber as well.  Jamie Clarke is an adventurer who has climbed Everest three times (summitting once in 1999) and the keynote speaker for the Expedition Everest Challenge. 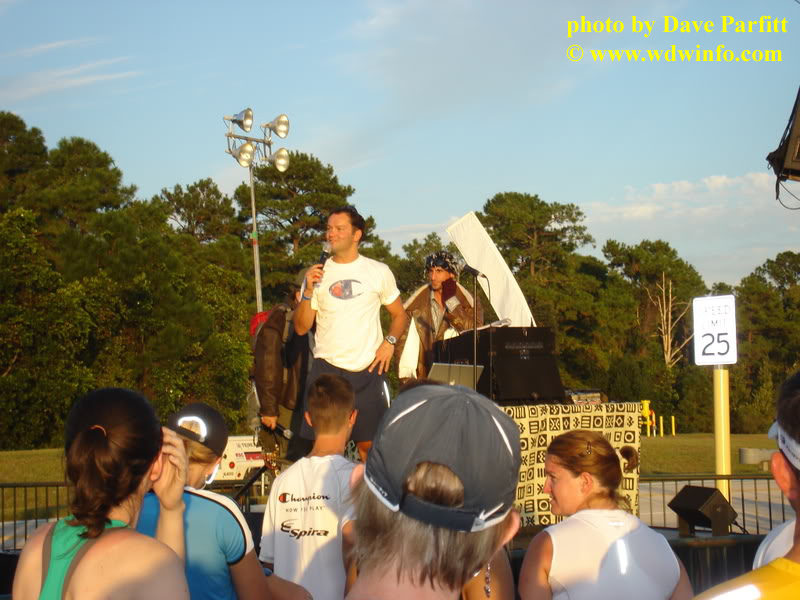 During the 2008 event, Jamie Clark spoke at the fitness expo, addressed racers at the starting line, and was on hand at the post-race party to meet runners, take pictures, and chat.  He was very charismatic, and I remember him saying how similar Disney’s Expedition Everest looked to the actual Mt. Everest he had personally experienced (except for the 90 degree heat).  Jamie Clarke will be returning to Disney’s Animal Kingdom for the 2009 race, and if you get a chance to hear him speak, he is well worth it.

If you are interested in Disney races, this is one I can highly recommend.  It had many different elements to make it a unique and fun running experience.  The event is also one of the few ways one can experience some of Disney’s Animal Kingdom’s signature attractions at night.  Plus, Disney has added a new kids event for 2009 (see details below) that will make the Expedition Everest Challenge something the whole family can enjoy together.  However, you only have a few weeks left to register, and the race is already 75% full – so you better decide quickly if you want to run this one.

New for 2009 is the addition of kids’ races for children ages 4-10.  These kids’ races will take place entirely in the Animal Kingdom parking lot, and will be similar to the adult race with a running event, followed by an obstacle course, and finishing with a fun activity (but not a scavenger hunt).  Registration fee for the kids’ race is $15 and includes a t-shirt and finishers medal.  In addition, children can purchase tickets for access to the post-race party for $15 per child (ages 3-9).

If you have questions about the 2009 Expedition Everest Challenge, or if you want to share your experiences from the inaugural 2008 event, please leave a comment below.