The clack of the tracks, the sound of the steam whistle blowing its call, the smell of the oil and fuel. That is what runs through the veins and soul of a train man – and a train man is what Walt Disney was, through and through. 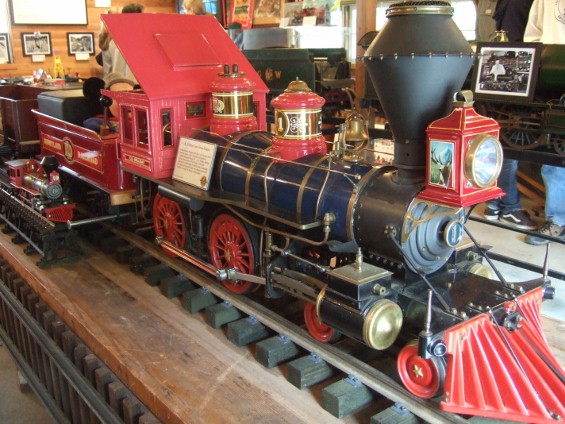 Our family had heard the call of the rails ourselves, but never found the opportunity to express it, so we decided that going with the Hitchen family from Windsor, Ontario, Canada was the best way to explore that unique aspect of Walt’s history. Therefore, on a fine Sunday afternoon in March, we travelled to Griffith Park in Los Angeles, CA to see part of Walt’s tangible legacy – his Barn. The famous backyard workshop that housed and hosted the most famous small scale railroad in the world – the Carolwood Pacific. 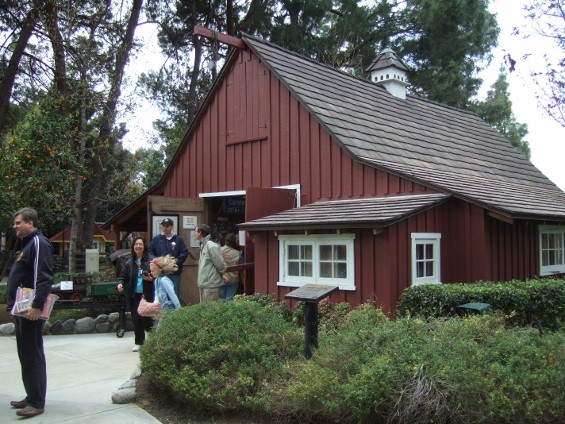 Since Walt’s Barn is operated by the Carolwood Historical Society, I went to their website www.carolwood.com and the Los Angeles Live Steamers Railroad Museum (LALSRM) website – www.lals.org to do my research. We definitely had to plan our visit to the Barn in advance – it’s only open on the 3rd Sunday of every month, from 11am – 3pm. It’s located within the LALSRM facility at 5202 Zoo Drive in Griffith Park. Right along the 134 Freeway side, that means easy access without having to drive through a lot of park to get there. Since it is located in the Los Angeles Live Steamers facility in the Park, we were greeted with the sounds and smells of a working railroad in action! 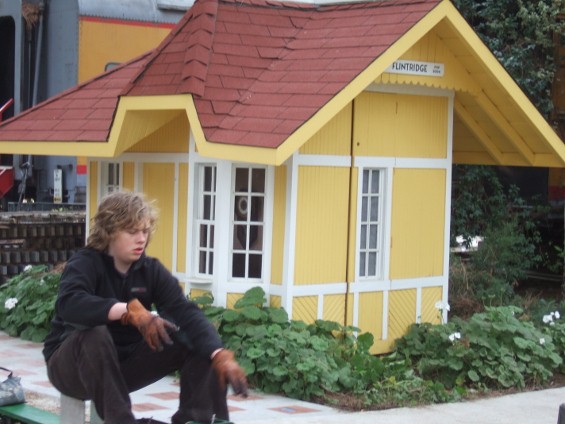 Once we got there, we only had a little difficulty finding the correct entrance. The Barn entrance is located on the East side of the LALSRM facility and has its own separate parking lot – something we were not aware of.  If you park by the West entrance – by the main LALSRM train rides gate, you’ll have a moderate walk along the road to the East gate.

Once we came to the gate, we were checked in. The Carolwood folks ask for a small donation of $3 per person to help support the facility, their hands-on exhibits and the museum. We thought it was a reasonable amount for what we got. We were greeted by a quaint little town on our left, a train full of passengers chugging along the track in front of us, and a friendly crossing guard – making sure we were safe and not run over by a train to ruin our experience! All the folks that work in the area are Society members, enthusiasts, and volunteer docents, so they really add quite a bit to your visit! 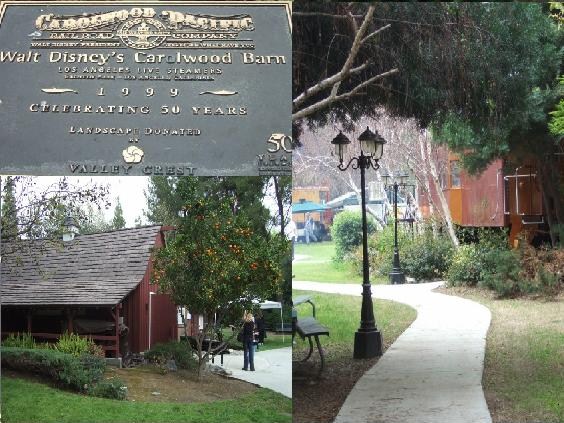 We got a chance to really explore the property a bit before meeting up with the curator of the Barn Museum, Nathan Eick. The grounds are well groomed – lots of flowers and trees to cut the heat of the summer. The museum is nestled inside the LALSRM train tracks, so you will see club members steaming along on their own creations, as well as engineers chugging passengers along over tressle bridges and through scenic towns. This gives you a true feel of what it must have been like in Walt’s Holmby Hills, CA backyard on a weekend afternoon. 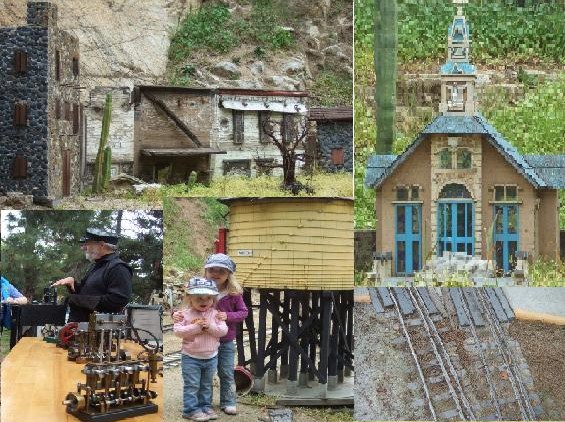 As you walk to the Barn, you notice a variety of outdoor exhibits on your left. This is the Stationary Steam Plant which has seven steam engines of all shapes and sizes, demonstrating how steam power works. A couple are even connected to whistles that children of all ages are invited to play with! This was an instant hit with my daughters, as was the children’s play area with wooden toy trains and track. 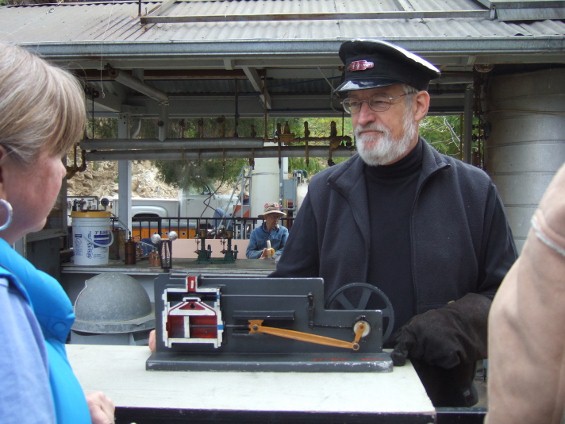 Across from this exhibit is the Barn itself. You are greeted by an actual train engine that is in the process of restoration – based on the same locomotive as Walt’s famous engine – the Lily Belle. 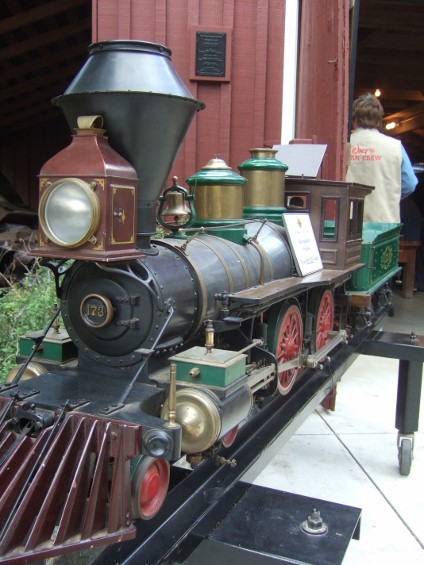 Entering the Barn becomes a trip back in time. You will find items from the original railroad, shelves and benches built by Walt’s own hands, and even his sink and phone. That’s only the beginning. There are items from other famous Walt Disney Company train enthusiasts – Roger Broggie, Ollie Johnston, Ward Kimball, and so on. We learned that the reason the Barn is located here on the LALS Club grounds is because Walt Disney was a charter member of the organization. His interest in live steam certainly was an example of the growth of this hobby in the 1950’s and his publicized interest in it didn’t harm its rising popularity. Walt’s interest spread throughout the Walt Disney Company due to folks being drafted to help him build and design the Lily Belle. Other exhibits show how Walt’s love of trains is reflected in various aspects of the Disney Theme parks. 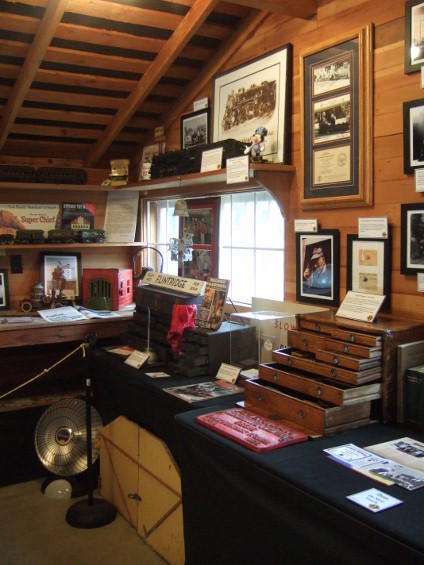 As you walk around the Barn, there are several docents that will be happy to provide you with further information on any of the pieces. The only restriction is not to touch the engines that are proudly displayed on tracks in the middle of the barn. I even got to listen to one of the docents, Doug, give a wonderful discussion of the artifacts to a tour group. His anecdotes and stories were not to be missed. 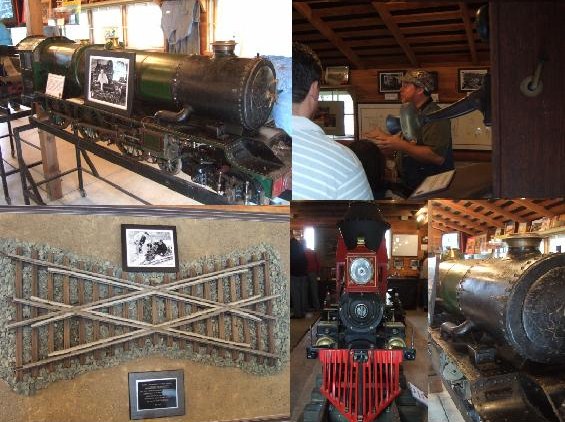 If you follow the path around the Barn to the gate, you will find another delight on the property – Ollie Johnston’s Depot. Mr. Johnston was one of Walt’s “Nine Old Men” and also a fellow live steam enthusiast. 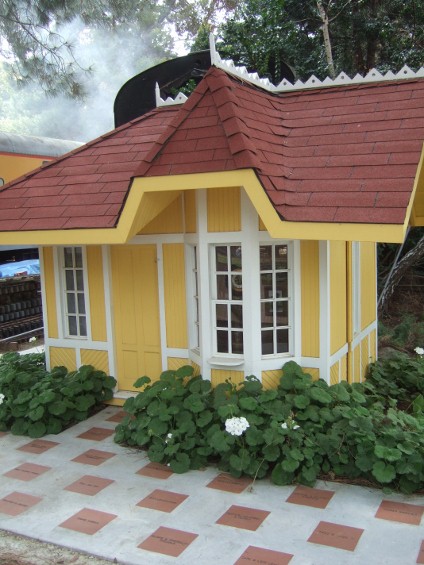 This train depot was built as a playhouse for Ollie’s children and had fallen into disrepair. Since one of the Carolwood Society’s missions is the restoration of pieces that played a pivotal role in the history of trains and their affiliation with the Walt Disney family, friends, and company, they were called upon to restore the depot after Ollie’s passing. Various tiles around the depot show names of donors to the project. 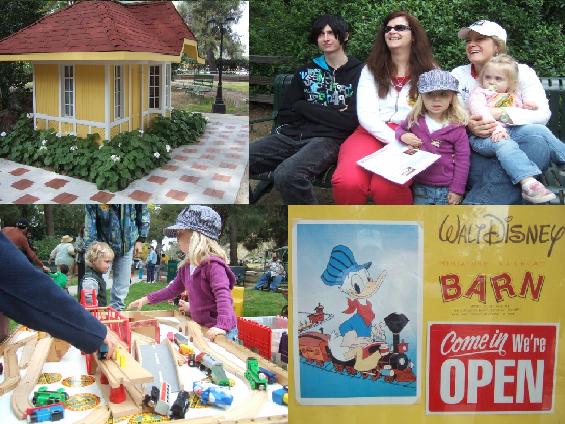 My girls really enjoyed the play area, the steam engine exhibit, and the Depot, but were a bit too young to fully appreciate the Barn, or let me spend a long enough period enjoying the exhibits (keeping in mind that I like museums…). We had to take turns keeping them entertained outside, while the other went into the Barn.

While I did my interview, everyone headed over to ride the LALS trains. If you are over 34 inches tall and under 350 lbs and are free of any kind of medical condition that wouldn’t allow you to keep your balance, you can head over and get in line for their free train rides. They also suggest that you leave a $3.00 donation for help in upkeeping and maintaining their exhibits. My youngest wasn’t tall enough, but my oldest really enjoyed her train ride with her father and friends! Something to note – The LALSRM is open for train rides EVERY Sunday of the month, so if your Disneyland visit isn’t on the 3rd Sunday of the month – not to fear! Walt’s barn is visible from the tracks, so feel free to include them on a stop through the park on your way to Universal or maybe combine this visit with any other Griffith Park attraction!!!*

All in all, we found this experience to be something that non-Disney lovers could even enjoy. The museum exhibits are really well done, the train culture and history is definitely the emphasis, and this will appeal to anyone who loves a good bit of engineering!

*NOTE: Griffith Park is home to other historical items relating to Walt. He would sit at the Carousel there and watch his daughters ride – the precursor to Disneyland’s famous carousel. You could also combine this with a visit to the Los Angeles Zoo www.lazoo.org, the Autry National Center (named for Gene Autry) www.autrynationalcenter.org, the Griffith Park Observatory – which was renovated and reopened in 2006. www.griffithobs.org
http://www.laparks.org/dos/parks/griffithPK/

While you’re in the neighborhood, it’s only 1 mile to the actual Walt Disney Studios in Burbank. They won’t let you on the lot, but you can drive around it on public streets and see the famed Animation and Seven Dwarves buildings!