Adventure on the Remote Jungle Boats at the Disneyland Hotel 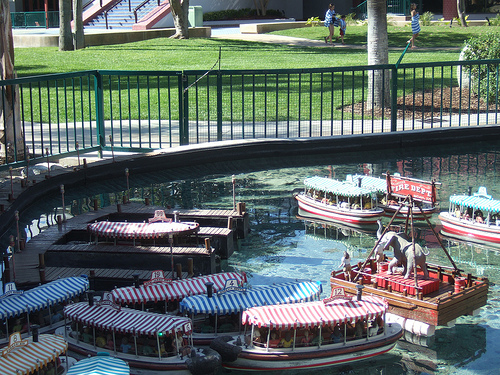 We found ourselves with an absolutely beautiful spring day – 80 degrees and a slight breeze – and Disneyland was really crowded.  We had just checked into the Disneyland Hotel for a long weekend and weren’t quite ready for the parks – and there it was – across the empty lawn, taunting us with its cool lagoon, striped canopies, and shiny wheels….and a bar, too!!!!

Our kids saw them and ran.  There they were – the Disneyland Hotel’s Remote Safari Adventure Jungle Boats! 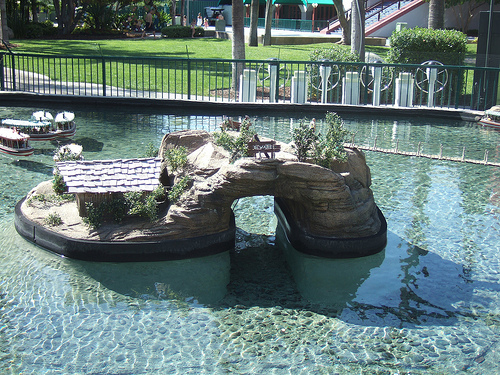 The Cavern and lower level of Pilot Wheels

A small unmanned kiosk holds the sign for the attraction.  There are token fueled steering wheels on 2 sides of the small boat lagoon, with the token machine on the lower level, near the expansive hotel lawn.  The sign on the token machine reads: “1 Token for $2”  “Special 4 tokens for $5” “Super Special 10 Tokens for $10”

How could we refuse the bargain value of the “Super Special”?  It was so tempting – so blatant!  Our wallets $10 lighter and tokens in hand, off we went.  Zoe took one wheel and Andrew the other, and we observed.  Andrew did great, once he was oriented to the controls.  He found his boat and took off – Zoe had some difficulty at first, due to her selection of boat, or should I say wheel.  It’s really up to you and your child if this is worth the money.  Zoe (turning 4) is just old enough to really want to drive the boats, but doesn’t have the motor coordination to operate both the wheel and the throttle at the same time, let alone figure out how to go forward or backward.  Ian had to help her drive while I talked to Tony and we chased Lily around the  grounds.  We found that it was extremely easy to blow through our tokens – one token is worth about 3 minutes of piloting time.  Andrew hit upon a remarkable discovery that his boat’s token machine was broken – the token went straight though and his boat just kept going and going!  That bought us a little bit more time, saved Tony a bit of money, and was a nice surprise!

The first tip we learned from this is that, when choosing a boat, always look for one that isn’t stuck in the middle of a huge cluster of other unused boats!  I realize that with younger kids- like Zoe, this really doesn’t work.  You get whatever boat the wheel they like goes to.  Now, if you do a quick little bit of visual research, you can try to introduce them to a better set of wheels – they are all marked with the number of the corresponding boat!

The crowded docks may make it hard to find your boat number! 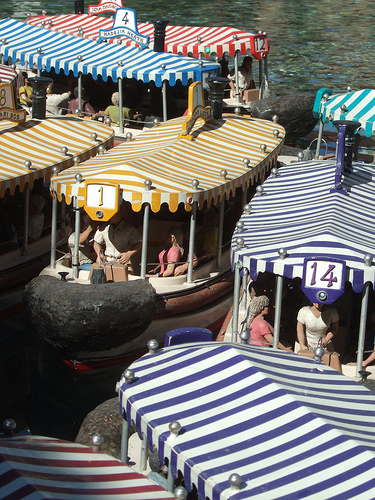 The second tip is that if you have smaller children, I would recommend directing them to the set of wheels on the upper level of the pond, right next to the Lost Bar – where you can get a beer for about $7 and a table to sit and watch your children play . 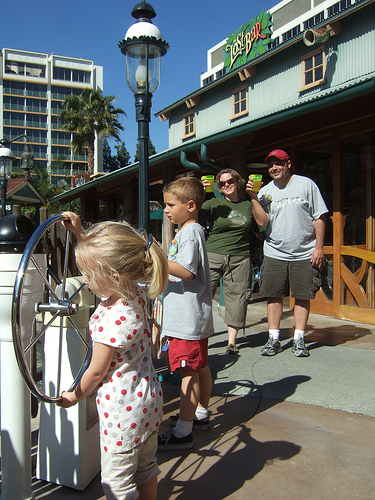 From this level, you are more centered on the pond and can actually see the cave, docks, and waterfall better for driving the boats into these features and triggering the special effects.

Did I mention the special effects?  There aren’t as many as in this attraction’s counterpart – Bwana Bob’s in Walt Disney World’s Magic Kingdom, but the ones they have are still fun! I won’t give all of them away, but Tony was pretty floored by the elephant effect! 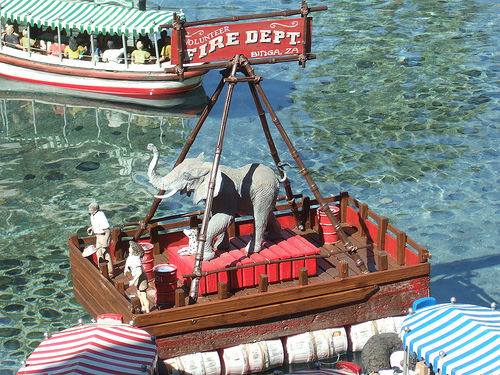 The Volunteer Fire Department cooks up some “hot” special effects!

In all honesty, The special effects are fun, but they aren’t the selling point of this attraction – it’s really the detail.  The replica of the Disneyland Jungle Cruise Port Building, the details of the boat passengers (which you can only really discover through the lens of your camera), the gorilla on the suspension bridge, the replica of Schweitzer Falls – these are the charms that draws people in, that you can discover without spending a dime. 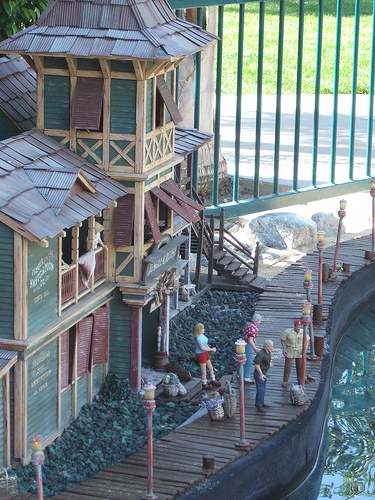 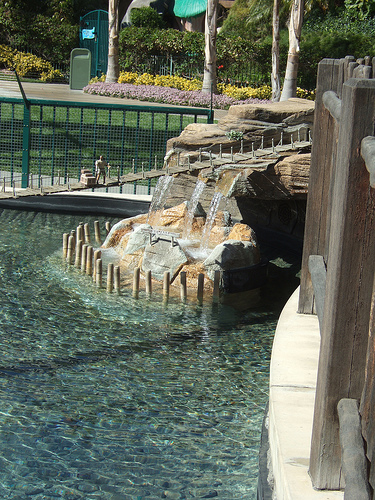 The miniature version of Schweitzer Falls

By the way – I almost forgot – one of the best parts of it, for my girls, was actually before we even started…

As we were walking down to the boat area, Goofy came strolling along the lawn, completely unaccompanied.  I guess that’s one of the magical things about the Disneyland Hotel – the surprise that comes when you turn each corner!  Those precious moments – completely alone with a character you love – are worth every effort! 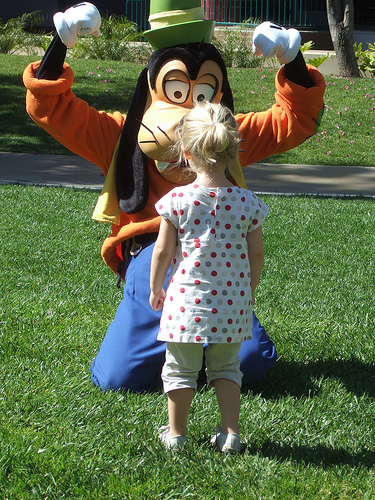