What makes Walt Disney World the “Happiest Place on Earth”?  Many times, it’s the Cast Members that make the difference.  Let me introduce you to a truly special Cast Member worth going out of your way to meet.  His name is Stanley Moore.  He’s better known as Ranger Stan, and you can find him patrolling the lobby, halls, grounds, and roof of Disney’s Wilderness Lodge.  Stan’s knowledge of the hotel is unsurpassed, and once you start listening to Stan’s stories, you will feel like you’re a part of his family. 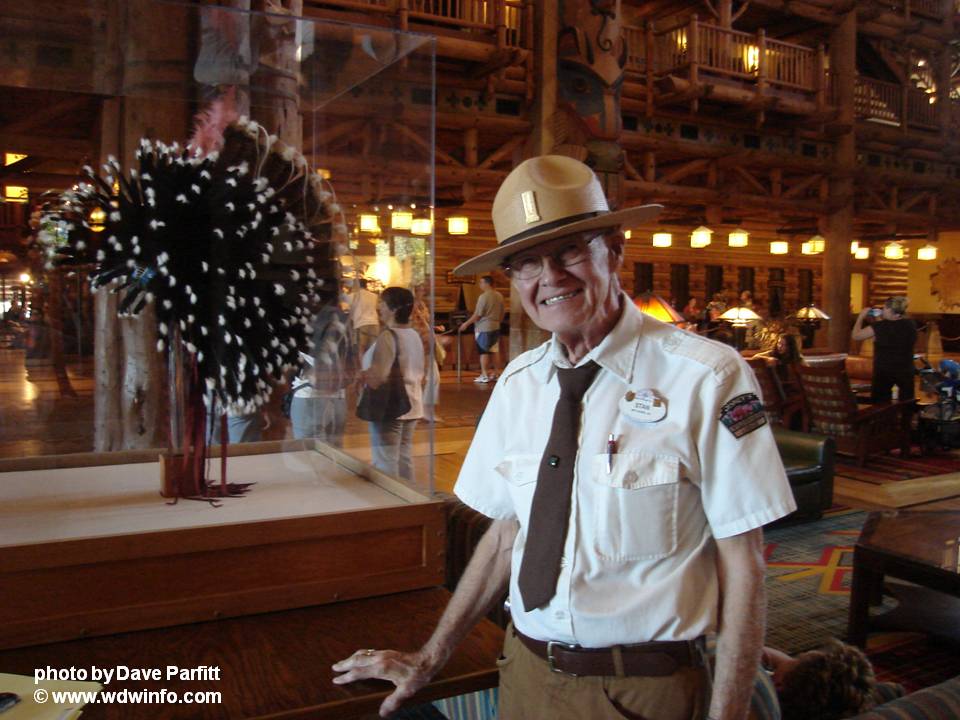 Stan has worked for Mickey for over 20 years.  Originally a school bus driver from New Jersey, Stan moved down to South Florida to watch his Grandson grow.  The plan was to fish and play with his Grandson, but Stan’s Daughter knew as soon as he went to Walt Disney World Casting he would be snapped up by the Mouse.  Stan was hired on his first interview, and started driving a bus in the Fort Wilderness campground.  Once there, he became friends with the General Manager of Fort Wilderness, Mr. Kevin Mayer (now Vice President with the Walt Disney Company), and they would go on fishing trips together.  When Mr. Mayer transferred to run the newly opened Wilderness Lodge, he brought Stan with him, and Ranger Stan was born.  The Wilderness Lodge opened May 28, 1994, and Ranger Stan welcomed the first guests.

So just what exactly are the duties of a Walt Disney World ranger?  Ranger Stan raises the flags every morning on the roof of the hotel with one lucky family.  He also leads architectural tours.  However, his favorite responsibility is greeting the guests of the hotel.  Ranger Stan loves people, and it shows.  I had the pleasure of a personal tour with Ranger Stan.  He first explained how I needed to behave myself, or he would open his secrete trap door to drop me down into Bay Lake.  Yes, I think I am taking this tour with my Grandfather.  But Stan isn’t all jokes, he knows his hotel.  He explains how the hotel was designed by Denver architect Peter Dominick who also designed Walt Disney World’s Animal Kingdom Lodge and the Grand Californian Hotel in Disneyland (which Stan says he’s never seen yet, but is planning to when he retires).   The lobby of the Wilderness Lodge is modeled after the Old Faithful Inn at Yellowstone National Park, and Stan goes on to explain in some detail the features of the lobby – complete with pointing out the features with his laser pointer.  Here’s a part of what I learned from my tour with Ranger Stan.

All of the wood in the lobby of Disney’s Wilderness Lodge is made from environmentally friendly standing, diseased, or dead Northern Lodgepole Pines from the Northwest United States.  So none of the timber used in the hotel decreased the number of live trees in the forest.  The wood was collected, loaded onto 85 tractor-trailers, and driven from Oregon to the building site in Orlando.  The assembly of the hotel began in August 1992, and was completed 21 months later.  In addition to the Northern Lodgepole Pines is another special kind of log known as “Disney Poles”.  These logs are “Imagineered” to look like real lumber, but are instead concrete reinforced with iron bars and covered steel.  These “Disney Poles” support the weight of the roof and provide the structural support for the hotel.  However, these “Disney Poles” are totally disguised and hidden by the Lodgepole Pines so you would never notice the difference.

There are two large totem poles that dominate the hotel lobby: the Raven Pole (over by the check in desk) and the Eagle Pole (closer to the fireplace).  The artist responsible for carving these totem poles, Duane Pasco, had been studying and practicing Native art of the Pacific Northwest since the late 1960’s.  The totem poles stand 54’ tall, and were hand carved in only 6 months with the help of three assistants.  If you want to learn more about the carvings on the poles, there is a brass plate mounted on the floor at the bottom of the pole that tells the story of the carvings. 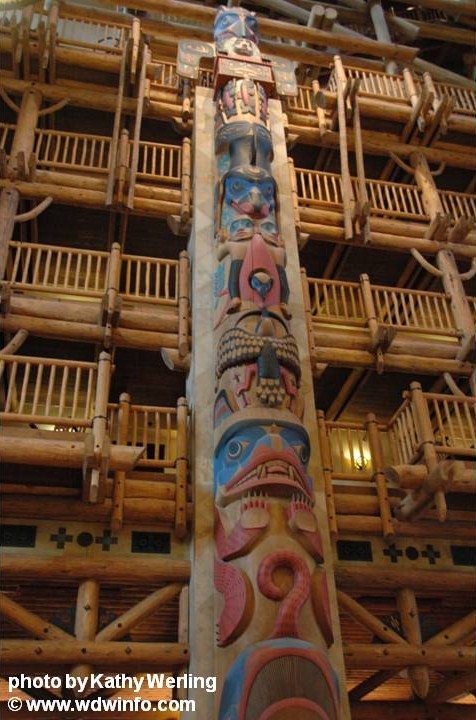 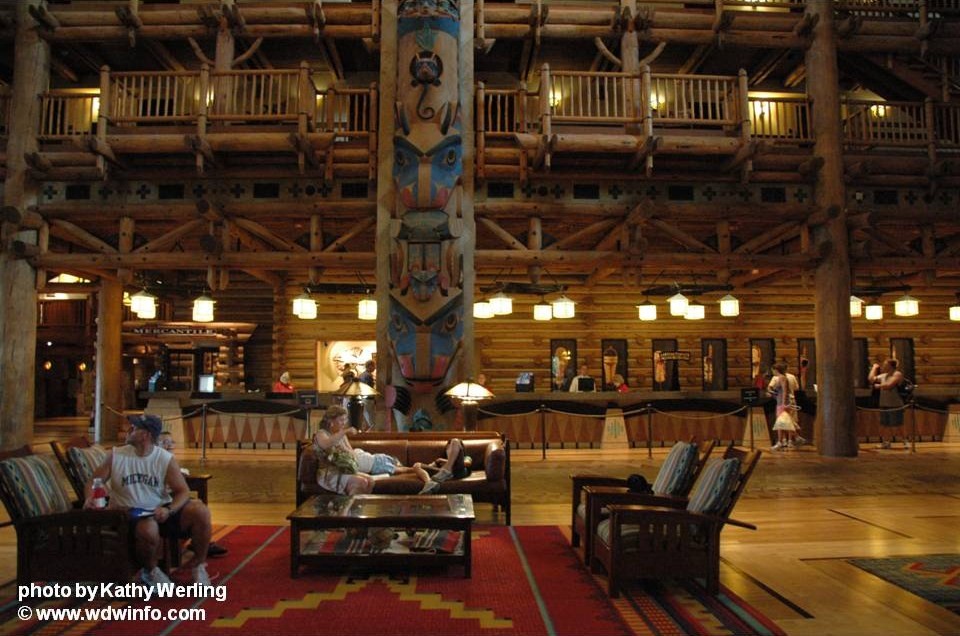 The other anchor to the lobby in the Wilderness Lodge is the massive stone fireplace on the northeast side.  This is an amazing piece of “Imagineering” made entirely of “Disney Stone” with not a natural rock in it.  The rocks and coloration of the fireplace are meant to represent the various strata of the Grand Canyon.  Listening to Ranger Stan made me feel as though I were standing with a National Park Ranger on the South Rim of the canyon.  The fireplace itself is 82’ tall from the floor of the lobby, through the ceiling, to the top of the chimneys on the roof. 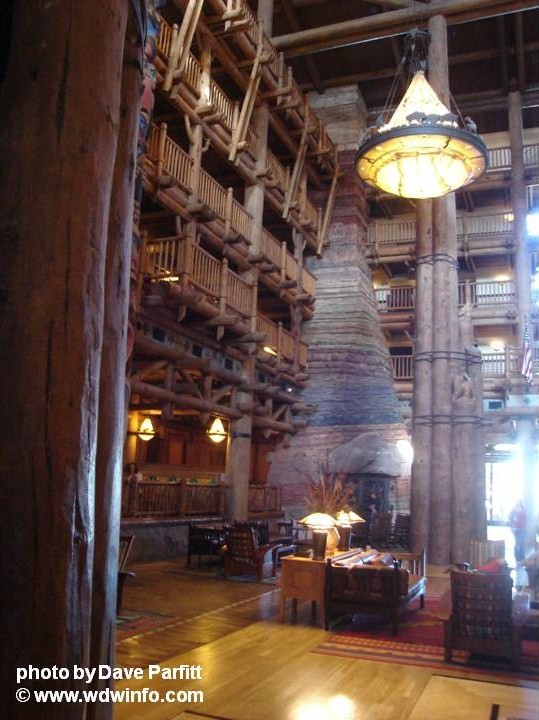 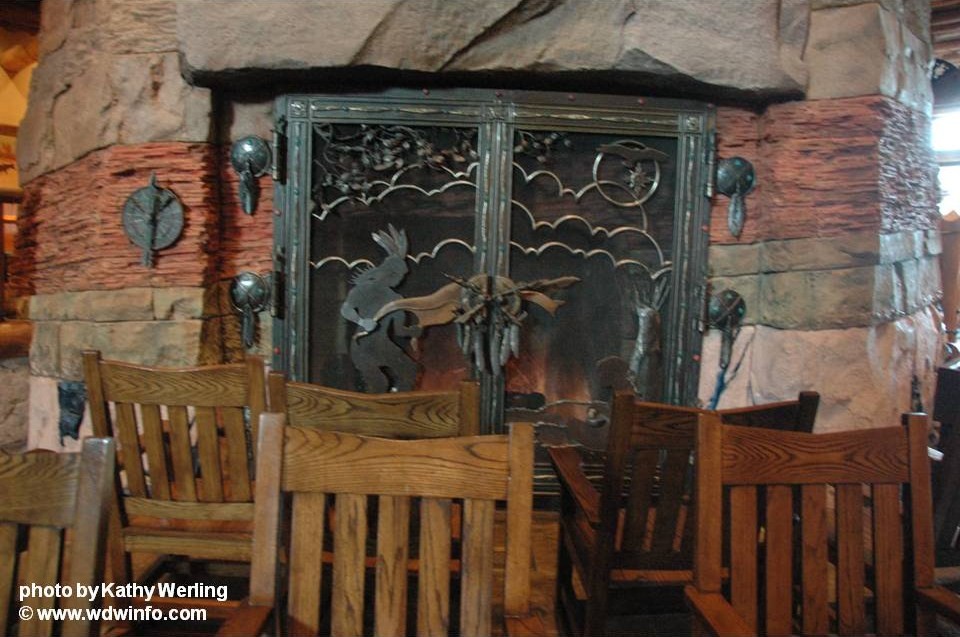 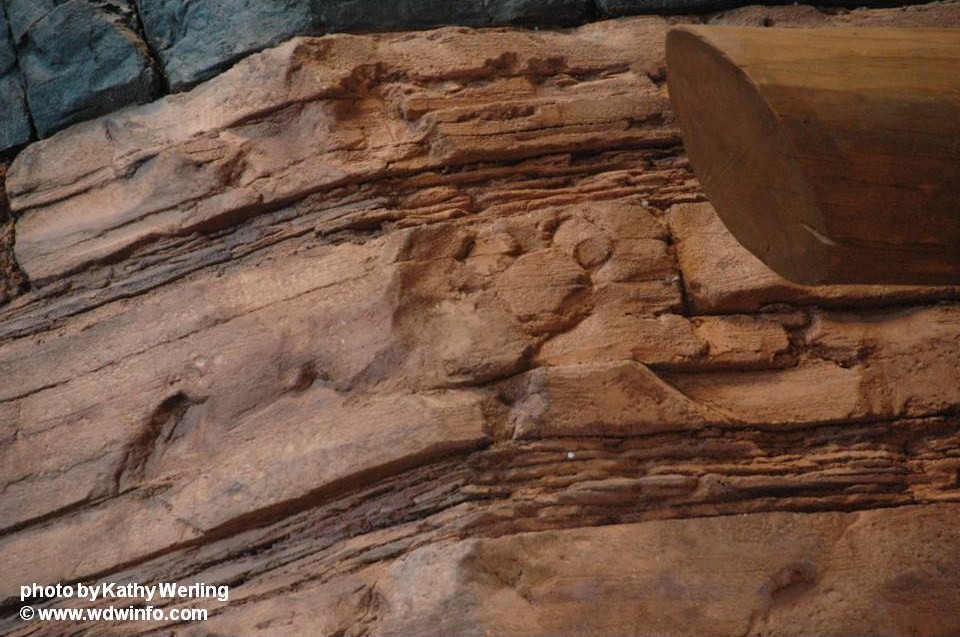 The final feature of the lobby is a representation of a bubbling hot spring meant to reflect Mammoth Hot Springs in Yellowstone National Park.  The water of this “hot spring” is cold, it bubbles up out of the floor, and flows out of the hotel down Silver Creek towards the pool.  Oftentimes, children will throw coins into the spring, and Ranger Stan will sometimes give the children a penny (with the parent’s permission of course) so they can wish for “health and long-life” for Ranger Stan. 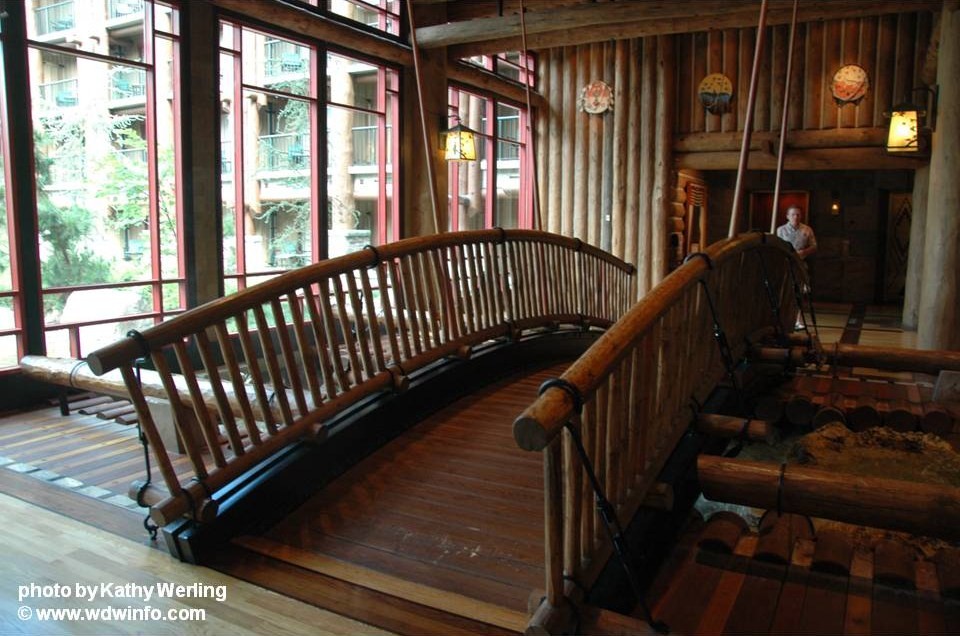 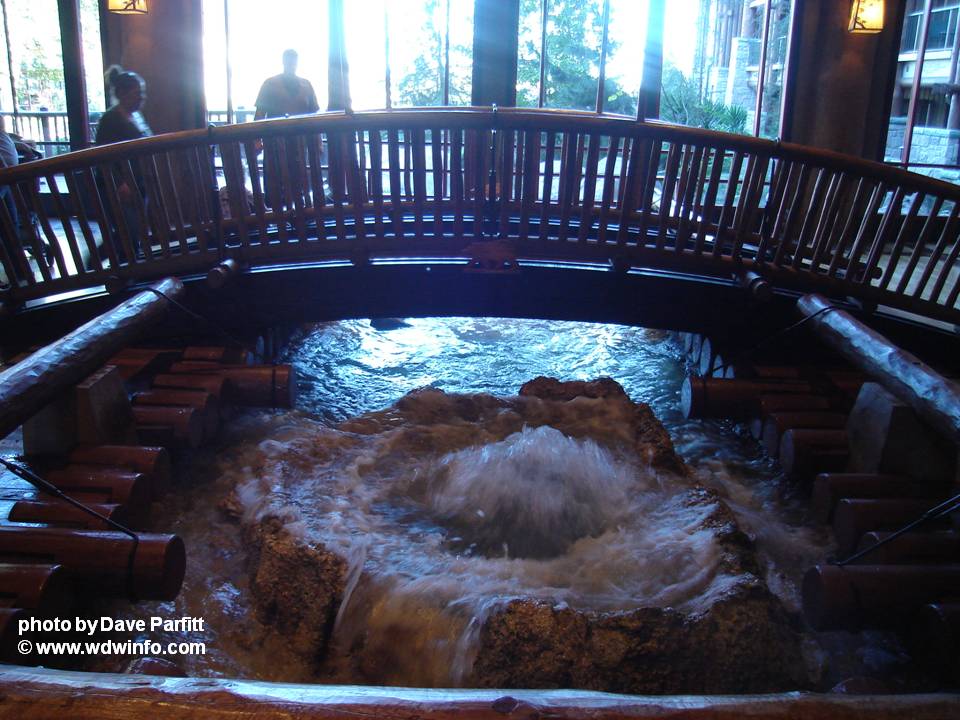 In Ranger Stan’s tenure at the Wilderness Lodge he’s been able to meet numerous actors, performers, and politicians such as: Sidney Poitier, Bob Hope, John Denver, and Arnold Schwarzenegger.  Special people Ranger Stan says he would have never had the opportunity to meet if it were not for Walt Disney World.  As my tour concluded and I now feel a part of Ranger Stan’s family, I’m compelled to ask about his Grandson he came down to fish and play with.  Stan tells me his Grandson is 33 years old now, but his plan for spending quality time with him while he was growing up didn’t work out so well.  For once Stan took the job at Walt Disney World and finally made the move to Orlando, his Daughter and Grandson up and moved to Atlanta!  Well, it’s worked out well for Stan, and we guests and visitors of Disney’s Wilderness Lodge are better off for having him.  If you ever get the opportunity to take one of Ranger Stan’s tours, do so, you will definitely be glad you did, and be sure to tell him Dave from the DIS Unplugged said “Hello”.