Characters NOT in flight

Teresa and I arrived at Downtown Disney early on Tuesday to be one of the first “characters in flight” on opening day, but it was not meant to be. Before we made it to the ticket booth, we saw a “closed due to weather” sign that we thought must have been left up from yesterday’s winds and rains. The day we were there was beautiful and no rain clouds in sight.  We were informed by the flight staff that the upper level winds were too strong for us to safely ascend to 400 feet and we should check back in about an hour or look to see if the balloon had been launched. 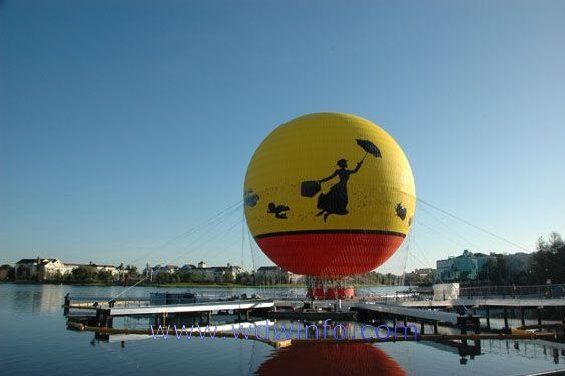 We went shopping and returned about an hour and a half later.  At that point you could feel the wind had picked up. We watched as they launched the balloon on a test flight, but the balloon was obviously being blown sideways due to the wind. The cast member operating the attraction stated that this has been an unusually windy month and the balloon had not gone up several times due to the poor conditions. He also explained that there are certain parameters they must follow. If they tried to send the balloon up and it was too windy, the balloon would lean too much and the machine would automatically shut down. He suggested that we go to lunch and check back later or call guest services for current conditions and status of balloon launching.

We went to lunch and shared with our server our difficulty at riding the balloon and he said that he had been “trying to ride that stupid balloon for over a week now”.  He had even gotten up to the booth to buy a boarding pass when he was informed that the two groups that were waiting would be allowed to go up but flights were being suspended after that.  After eating, the wind had obviously picked up and we saw that there was no “launch team” beneath the balloon so we went home. We did learn a valuable lesson – when in doubt, call Downtown Disney Guest Relations @ (407) 824-4321  prior to arriving for a flight.