Our first day at Disneyland – cue the firing squad 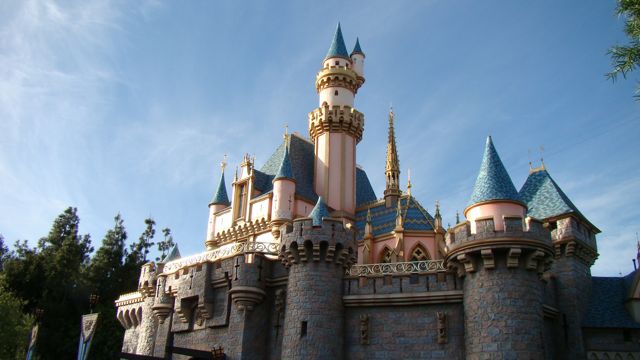 The idea of an early flight is always better in theory than in execution.  I’m not a morning person – in fact, ‘turning in early’ for me usually means I’m in bed by 2am.  So, having to leave the house at 5:30am for a 7am flight to LAX always leaves me repeating the same line – “what the hell was I thinking”.  Even Walter, who is an avowed “morning person” finds the concept of leaving for the airport at that hour just a little left of obscene.

But, I can be forgiven for wanting to spend as much time in California as I can.  I like taking the first flight out and the last flight back – I want every minute I can get to spend at Disneyland.
I’m also the obscene ‘over-packer’.  I can’t help it – I’m convinced that I’ll need every one of those 20 t-shirts and 15 pairs of jeans I packed.  It doesn’t help that my suitcase is a honkin big Travel Pro combination suitcase/garment bag.  Without anything in it the thing weighs 20 lbs, so invariably I always end up paying the extra weight fee on my bags.

This trip we’re flying United – it’s my second time flying them and I have to say I like them.  I’m not in love with them, but I like them.  The skycap that checked our bags in at the airport was nice enough to not charge me for my overweight bag – so I took good care of him with a $60 tip (the bag fee would have been $125 – so I made out).

I did get stopped at security with the new camera.  I guess on the x-ray, the shape of the camera looked suspicious.  I’ve said many times that I’m fine with them taking as much time as they need to go thru my bags and check out whatever they have to check out.  What bothered me was the idle chit chat she was doing back and forth with her coworkers instead of doing her job so I could be on my way.  So, if any TSA folks are reading this, can I offer some advice?  When you pull us out of line, and we’re being respectful of your job – how about showing a little respect for our time?  I want you to be thorough in inspecting whatever you need to inspect, but for the love of God, do I really need to listen to you talk to Bubba standing next to you about what you had for dinner last night – and if you are going to go on and on about inane nonsense, at least keep working while you’re doing it.   And if that’s not an option, than shut up, check the bag and talk to Bubba on your time, not mine.  Fair enough?

Then we get on the plane and the queen sitting across from Walter decides to hit on him – with me sitting right there.  Okay, at this point the Gods of air travel are testing me.  I’m on 4 hours of sleep, I now know all about what Agnes, the TSA rep in the two sizes too small uniform had for dinner the night before and the Phyliss Diller/Jimmy Durante love-child look alike in the next row is hitting on my husband.   I keep reminding myself that even the most basic scene on an airplane is usually met by the FBI upon arrival so I just shut up, secure in the knowledge that Walter is a good guy, and he has better taste than a timeshare salesman in need of dermabrasion and nose job. 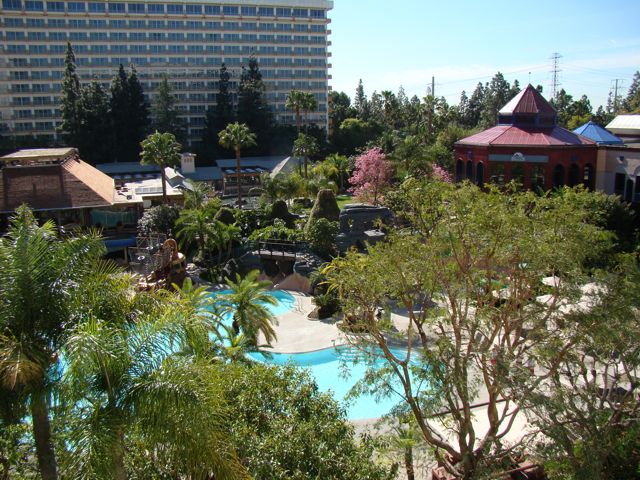 Our flight arrived on time and we waited for the Disneyland Express shuttle bus to take us to the resort.  There are a few reasons I do this, not the least of which is I HATE driving L.A.’s freeways.  The OFFICIAL DL shuttle is operated by Grey Line and is called the Disneyland Express – it’s a nice, large comfortable bus.  But beware, there are any number of less than adequate operators with the words “Disneyland” and “Express” on their less than adequate vehicles.  And if you haven’t prepaid for your transfers, these other operators will try to convince you to let them take you to Disneyland.  Avoid the temptation – Grey Line runs a nice bus, it’s inexpensive (about $30 round trip) and relatively convenient.  The bus runs every half hour on the half hour thru most of the day, and every hour on the half hour early in the morning and later in the evening.

We arrived at the resort around 11:30am and I was pleasantly surprised to find our room was ready.  Apparently what wasn’t ‘ready’ was the hot water.  We had no hot water and it required a call to maintenance to get it fixed.  I would have been fine with that had it not happened again this morning.  I’m sorry – but you’ve been a hotel for 50 years, I’m guessing by now you’ve mastered the theory of ‘consistent hot water delivery’.  Then there was the condescending maintenance guy who felt compelled to give Walter a lesson on how to turn on the shower.  I thought Walter was going to beat him dead right there in the bathroom.  God bless him, he has much better self control than I do – had it been me in there, the guy would have walked out thinking I had tourettes.

I also have to say that it’s obvious something is up with the CM’s here this trip.  Everyone seems to be a leaning a bit on the rude side.  I get that the economy is hitting everyone – lord knows this hotel is a veritable ghost town.  But you’d think that it would make people even more motivated to keep the guests they do have happy.  Our bellman mentioned that he’s been working here 20 years and this January was the slowest he’s ever seen it.  The concierge lounge is CLOSED until next week – that’s how slow it is.  I’ve never heard of Disney shutting a concierge lounge.  I’ll be honest, it’s REALLY disappointing.  Every other trip I’ve taken out here the CM’s I’ve come across have been first rate.  Now, to be fair, it’s not EVERY CM we interacted with that had a ‘tude’ – but more than a few.   I’m willing to write this one off to happenstance – wrong place, wrong time – and the fact that we’re both tired and jet-lagged.  I’m REALLY hoping that it improves.

Once Walter and I took our cold showers, we headed over to the Magic Kingdom to have dinner.  I will say that our server at the Blue Bayou, Linda was wonderful.  Really great service – unfortunately the service was far better than the food was.  This restaurant consistently disappoints me, so I think I’m done eating there for a while.  It’s not that the food was bad, it just wasn’t very good and for those prices, you need to do much better.  It’s another example of a Disney restaurant resting on it’s location and captive audience to strive towards mediocrity. 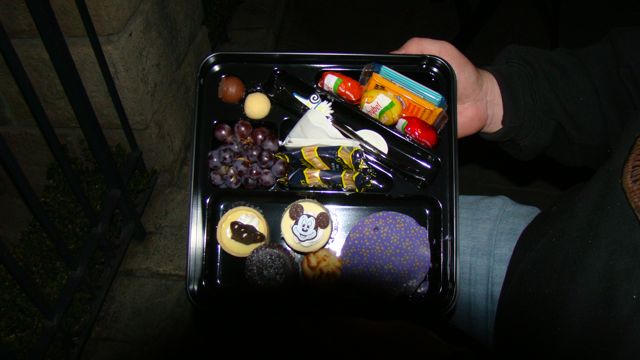 After dinner, we had reservations for the Fantasmic dessert party.  I was skeptical of paying $59 per person to watch a show that we could see for free, but I wanted to try it out as we’ve been asked about it a few times.  I’m here for you people, doing the tough stuff so I can guide you thru your vacations.  It’s okay – you don’t have to thank me – I live to serve others.

The show, as always was great.  We had great seats and were served a ‘boxed dessert’.  It included grapes, assorted cheeses, small individual desserts like cheescake, chocolate covered cookies among other things, and an ‘edible’ spoon that lacked any flavor and was hard enough to crack all your teeth.   While we did enjoy the show, and we had good seats – this was NOT worth $59 a head.  Unless you’re visiting the parks on a very busy day and MUST see Fantasmic, I don’t recommend this.