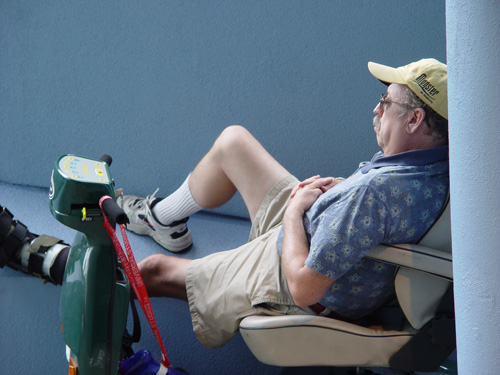 Nothing can be said about Bob Varley without recognizing first that he was an original. While it’s true that we are all unique, it’s safe to say that Bob was more unique than most. It didn’t matter what the event or occasion – no matter how grand or mundane – Bob did it just a little differently.

Bob loved to help, whether you wanted him to or not – it didn’t matter what the situation was – if you were moving to a new house, Bob was there with a handcart. If you needed a ride to the airport, Bob was there with his van (and inside that van was apparently every piece of paper Bob ever came across). And if you were planning a trip to Disney World and happened to mention that to Bob – then God help you. But that was Bob – your need was his need, your pain was his pain, your joy was his joy.

I had the pleasure of being Bob’s friend and co-worker for nearly a decade. It never failed to amaze me that a deli manager from Massachusetts could so effortlessly reinvent himself as a broadcaster, photographer, negotiator, pitchman and all around travel expert without ever breaking a sweat. For most, any one of those disciplines would be an overwhelming life change, but Bob embraced all of it with that seemingly endless supply of energy and good humor that was his hallmark.

Bob was there almost from the beginning of our web site – going from a small group of like minded Disney fans into a worldwide phenomenon that has helped millions of people from all around the world discover the joy of Disney – I can not imagine a job better suited to Bob – and I can tell you his presence and work are in equal measure – irreplaceable.

When word started to spread thru our community about Bob’s passing, something truly amazing happened. In the 11 years that I’ve worked on the web, I’ve never witnessed the kind of outpouring of grief and support that I saw among Bob’s legions of fans from around the world. And I do mean around the world – from Australia to Germany from the United Kingdom to South Africa, Bob’s managed to touch people regardless of the medium. His singular personality made it impossible not to love him – and the depth and sincerity of his heart were without equal.

If we can step back from our grief just long enough, I think there are many things we can learn from the life Bob led. He was preemptively thoughtful. Always carrying two umbrellas on his cart, just in case. The word ‘stranger’ was not in his vocabulary – he greeted everyone he met as though they were a lifelong friend. Bob was incapable of pretense in any form. No matter the circumstance or the occasion, Bob was always unapologetically Bob. Bob was not afraid to laugh at himself – but he was loath to laugh at others. Whether he knew you only 10 minutes or 10 years – if you were in need, and he could help – there he was. But better still was that he never expected anything in return. He did what so few are truly capable of and gave of himself with a pure heart. Maybe that’s why so many people were drawn to him – down deep, we really wanted to be more like him – just without the boot, the cart and the Boston accent.

When I think of all the people that have come in and out of my life over the years, I realize how truly special Bob was. It’s hard to imagine what life will be like without him. When my father passed away there was a saying on his prayer card that went “As long as I have the love of each of you, I can live my life in the hearts of all of you”. As I believe that about my father, I also believe it true about Bob. We will miss him – make no mistake, but we dishonor him if we spend too much time in our grief. Bob was not one for self pity. He held his cherished memories close to his heart, gathered his grief and sadness and using the love of those around him as his beacon – he continued on with his adventure. Stronger for the experience, wiser for having been vulnerable enough to love so deeply in the first place.

I will miss my friend – I will miss him every day for the rest of my life – but in missing him I will celebrate him, learn from him and remain forever grateful that God was so kind as to bring a man like Bob Varley into my life.